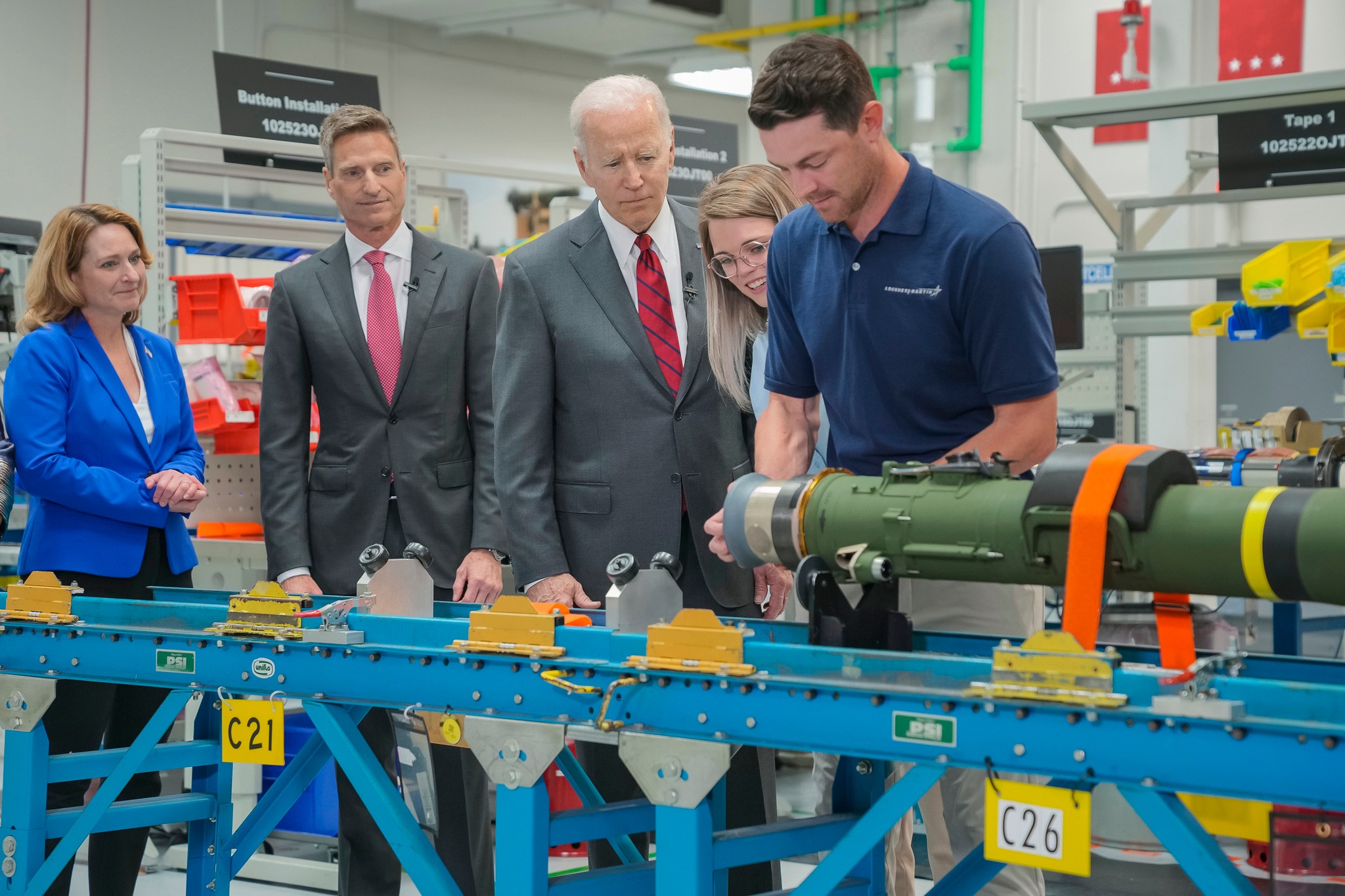 “At the same time, this loss isn’t evidence that Trump’s influence with the Republican base is slipping. Herbster was far from a perfect candidate — most notably, eight women accused him of unwanted sexual advances, including groping and forcible kissing.”

Amy Walter: “It’s a mistake to conclude that Trump’s influence on the party is waning.”

New York Times: “In the next two weeks, Mr. Trump is backing two more Republican candidates for governor, in Idaho and Georgia, both of whom are challenging Republican incumbents and neither of whom is favored to win.”

Herbster, who attended the infamous Jan. 6 Trump rally that preceded the attack on the U.S. Capitol, led in the polls through March, and he used his personal wealth to outspend the rest of the field. Ricketts, meanwhile, financed a super PAC that ran commercials attacking Herbster as a “Missouri millionaire,” though it also aired ads arguing that Lindstrom was insufficiently conservative.

The race took a dark turn in mid-April when eight women, including Republican state Sen. Julie Slama, accused Herbster of sexual assault. Herbster responded by running a TV ad that took the remarkable tack of directly attacking Slama and claiming her allegations were part of a scheme orchestrated by Pillen and Ricketts. Trump himself very much stood by his man, saying at a rally, “He’s the most innocent human being.” In the end, though, enough Republican voters followed Ricketts’ lead to allow Pillen to score a primary win over his Trump-endorsed foe.

New York Times: “Mr. Herbster is the first candidate endorsed by Mr. Trump to lose a Republican primary in 2022. Many more Trump-endorsed candidates are facing stiff headwinds in coming primaries, starting with contests for governor in Idaho next week and in Georgia on May 24.

“Mr. Mooney, a four-term House Republican known more as a conservative warrior than a legislator, used Mr. Trump’s endorsement to overcome a distinct disadvantage: The redrawn district he was running in included far more of Mr. McKinley’s old district than Mr. Mooney’s.”

“The huge margins Mr. Mooney was able to run up in the fast-growing counties from his old district along the Maryland state line proved too great for Mr. McKinley… It was a thorough repudiation of Mr. McKinley’s pragmatism.”

Trump was upset with McKinley over a variety of sins: Voting to certify Biden’s victory in the 2020 election, supporting a bipartisan commission to investigate the Jan. 6 insurrection and voting for the bipartisan infrastructure bill last year.

The race was the first of five incumbent-against-incumbent primaries this year.

NEBRASKA 2ND CD. State Sen. Tony Vargas beat mental health counselor Alisha Shelton 69-31 to win the Democratic nomination to face Republican Rep. Don Bacon in an Omaha-based seat that Biden would have carried 52-46. Vargas, who is the son of immigrants from Peru, would be the first Latino to represent the Cornhusker State in Congress.

Bacon himself turned back an underfunded intra-party challenge from roofer Steve Kuehl 77-23. Kuehl attracted some attention during the final days of the race when Trump used a rally for gubernatorial candidate Charles Herbster as an opportunity to bash the congressman and implore the audience to vote for “Steve, whoever the hell you are.” However, not many Republicans in this swing district were willing to fire their congressman to take a chance on “Steve, whoever the hell you are.”

FLORIDA 4TH CD. Former state Sen. Tony Hill on Tuesday kicked off a campaign for Florida’s 4th Congressional District, a red-leaning open seat in the Jacksonville area that would have voted 53-46 for Donald Trump. Hill, an Army veteran, is the most notable Democrat to enter the race so far, though businesswoman LaShonda Holloway, who unsuccessfully ran in the primary against Rep. Al Lawson in the old 5th District in 2016 and 2020, is also running, as are multiple Republicans.

IDAHO 2ND CD. Attorney Bryan Smith’s latest ad for next week’s GOP primary once again slams incumbent Mike Simpson for being too liberal, but this time, his narrator cites a 1991 article to insist that “Simpson says he is pro-choice on abortion.” Simpson, Nathan Gonzales notes, actually sports a 100% rating with two prominent anti-abortion groups.

HAWAII 2ND CD. State Rep. Patrick Branco said Thursday that he would compete in the August Democratic primary to succeed Rep. Kai Kahele, an announcement that came two days before Kahele himself confirmed he’d be running for governor. Branco, who is a former U.S. State Department diplomat, also noted that he’d be only the third Native Hawaiian to serve in Congress after Kahele and the late Sen. Daniel Akaka.

Democratic state Sen. Jill Tokuda announced her own campaign last month for this 64-34 Biden seat, which was barely altered by redistricting, and more names will likely surface ahead of the June 7 filing deadline. About 40% of the 2nd District is located in Honolulu, the state’s capital and by far its largest community: The remainder of the constituency is made up of Hawaii’s more rural Neighbor Islands, the term for every island apart from Honolulu’s Oahu.

MARYLAND 4TH CD. House Speaker Nancy Pelosi has endorsed former Rep. Donna Edwards as she makes a comeback bid in Maryland’s open 4th Congressional District, which she previously held from 2008 to 2016. Pelosi is not only the most powerful Democrat in the House, she’s also one of the state’s most famous daughters: She was born in Baltimore and her father, Thomas D’Alesandro, represented the city in Congress and served as its mayor in the 1940s and ’50s.

NEW YORK 4TH CD. Jewish Insider’s Marc Rod reports that Republicans in Nassau County have united behind Hempstead Town Councilman Anthony D’Esposito in his campaign for the open 4th Congressional District, noting that businessman Bill Staniford dropped out of the race at some point after the Nassau GOP endorsed D’Esposito at the end of March. Democrats, meanwhile, have a multi-way primary, though everything remains up in the air as a state court redraws New York’s congressional map.

NEW YORK 19TH CD. Ulster County Executive Pat Ryan has filed a notice with the state Board of Elections asking that he be allowed to replace Rep. Antonio Delgado on this year’s ballot, since Delgado will soon be elevated to fill the vacant post of lieutenant governor. That would allow a special committee designated by Delgado’s campaign to swap Ryan in instead, much as Delgado has already been substituted for former Lt. Gov. Brian Benjamin in next month’s primary.

The Times Herald-Record’s Chris McKenna says that Ryan’s filing was made with Delgado’s assent, though Ryan has yet to say whether he’ll actually run. If he does go for it, this maneuver might obviate the need to for him to gather and submit petitions of his own. However, with a new court-drawn map on the way, all congressional campaigns in New York are likely to have to collect signatures a second time.

NEW YORK 23RD CD. Republican Rep. Tom Reed, who announced his retirement more than a year ago in the wake of sexual misconduct allegations, said on Tuesday that he would resign his seat, effective that day. According to Punchbowl News’ Jake Sherman, he will take a position with Prime Policy Group, a lobbying firm.

Reed’s early departure will also set off a special election for the 23rd District, a conservative seat in Upstate New York that Donald Trump carried 55-43. Reed himself first won office in a 2010 special election that was prompted when Democratic Rep. Eric Massa resigned—also for alleged sexual misconduct. At the time, News 4 Buffalo reporter Nick Veronica reminds us, Reed wanted Massa to pay for the costs of holding that election: “He caused the need for a special election, he should pay for it,” said Reed.

TEXAS 28TH CD. Educator Tannya Benavides, whose candidacy played a key role in forcing a Democratic primary runoff in Texas’ 28th Congressional District, endorsed attorney Jessica Cisneros on Tuesday. Benavides took just 4.7% in the first round in May, but her presence ensured no candidate would forestall a runoff by winning a majority, as Rep. Henry Cuellar won 48.7% of the vote and Cisneros earned 46.6%.

WYOMING AT LARGE CD. Donald Trump Jr. stars in a commercial for a group called Wyoming Values PAC supporting attorney Harriet Hageman’s campaign against incumbent Liz Cheney in the August Republican primary. The ad (which we’re watching so you don’t have to) opens with the younger Trump insisting, “For far too long, Liz Cheney has bowed to the Democrat [sic] elites like Nancy Pelosi. That’s why my father and I endorse Harriet Hageman for Congress.” Fox puts the size of the buy at $500,000.

ILLINOIS 3RD CD. Chicago Alderman Gilbert Villegas on Monday earned the backing of former 4th District Rep. Luis Gutierrez, who retired in 2019 from a constituency that forms just under half of the new 3rd, ahead of the June 28 Democratic primary.

Gutierrez, whose 1992 win made him the first Latino to represent Illinois in Congress, argued that groups that want to “defund the police” are supporting Villegas’ main intra-party rival, state Rep. Delia Ramirez. Ramirez, who picked up an endorsement from current 4th District Rep. Chuy Garcia months ago, pushed back with a statement extolling her for voting for “more than $100 million in funding training and pension benefits for police officers and first responders.”

MINNESOTA 1ST CD. Protect Freedom PAC, a group run by allies of Kentucky Sen. Rand Paul, is spending at least $1 million on an ad campaign for state Rep. Jeremy Munson ahead of the May 24 special Republican primary. The spot, like pretty much all of the PAC’s advertising, features Paul pitching his candidate as someone who will “join me in demanding Fauci’s fired and removed from office.”

The only other major outside spending so far has been a $600,000 buy from Defending Main Street on behalf of a rival contender, former Department of Agriculture official Brad Finstad; its commercial promotes Finstad as an ardent conservative who served in the Trump administration.

MINNESOTA 5TH CD. Democratic Rep. Ilhan Omar over the weekend earned the endorsement of the state party on the second ballot after she very narrowly failed to receive the 60% needed in the first round. Former Minneapolis City Council member Don Samuels, who ultimately lost that vote to Omar 62-37, quickly made it clear he’d keep running in the August primary.

NEW JERSEY 5TH CD. The New Jersey Globe reports that Democratic Rep. Josh Gottheimer has been sending out mailers ostensibly attacking his 2020 GOP rival, Frank Pallotta, for being “too much like Trump,” which the site argues is the incumbent’s attempt to boost Pallotta in the June 7 primary. Pallotta, whom Gottheimer beat 53-45 last time, has badly trailed Marine veteran Nick De Gregorio in fundraising.

TEXAS 15TH CD. Businesswoman Michelle Vallejo has picked up an endorsement from former Rep. Rubén Hinojosa, who retired in 2017 after two decades representing this area, for the May 24 Democratic runoff against Army veteran Ruben Ramirez. Hinojosa previously supported nonprofit official Eliza Alvarado, who went on to take a close fourth place in the first round of the primary in March.

The advances in science and technology over our lifetimes are awe-inspiring. But unfortunately not everyone feels that way. “In a 2021 paper published in American Political Science Review, political scientists David Barker, Ryan Detamble and Morgan Marietta looked at Republicans’ growing distrust of scientists and other experts,” FiveThirtyEight reports.

The growing gap has already proven a big problem during the Covid-19 pandemic, but it’s only going to get worse.