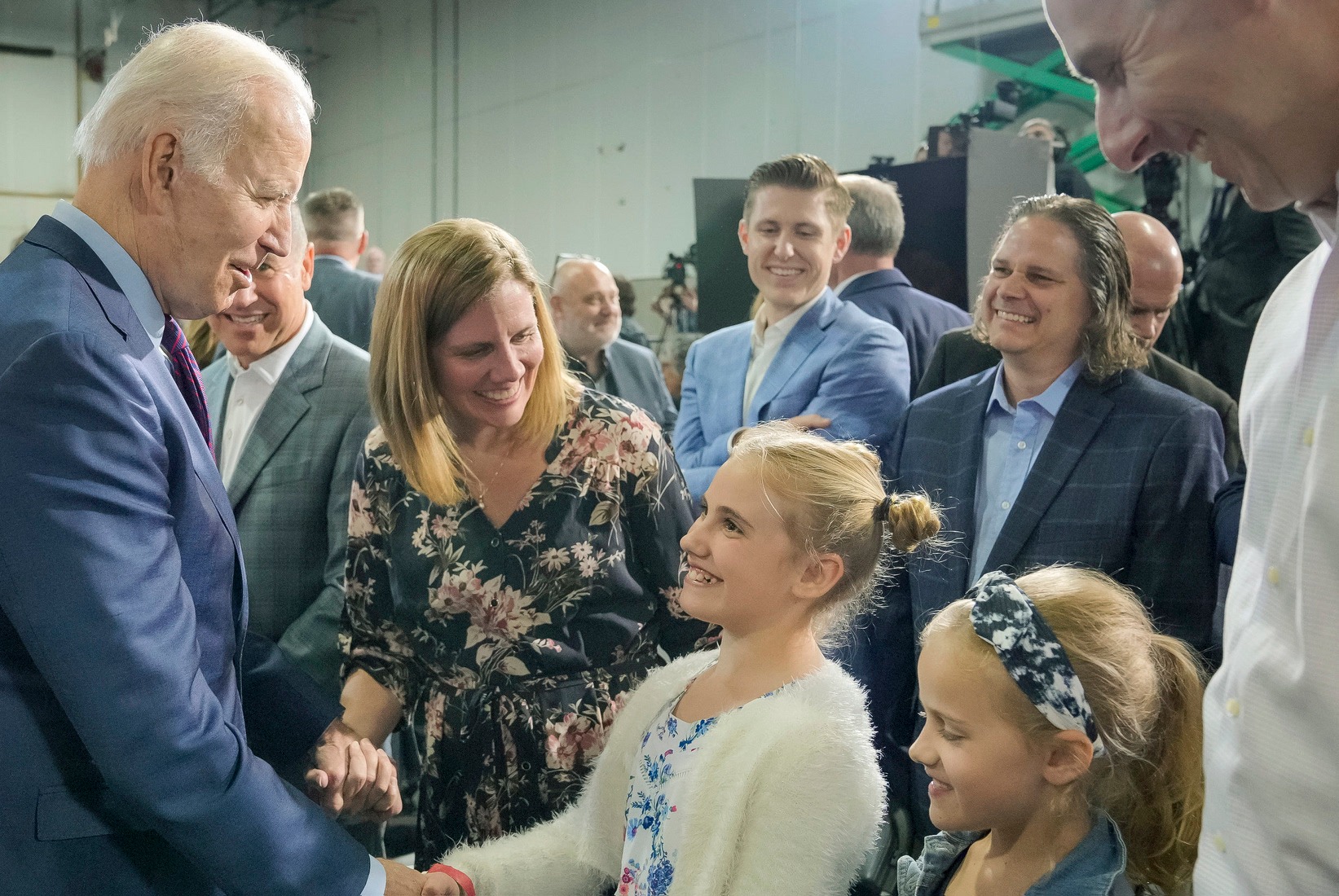 A new Yahoo News/YouGov poll shows that Americans’ confidence in the U.S. Supreme Court has collapsed over the last 20 months — a period that began with former President Donald Trump and Senate Republicans installing a 6-3 conservative majority ahead of the 2020 election.

Playbook: “West Virginia and Nebraska hold primaries today. Like last week’s contests in Ohio, the action is mostly on the Republican side, and the main drama is about former President Donald Trump.”

Punchbowl News: “In West Virginia, voters will decide between GOP Reps. Alex Mooney – who has Trump’s support – and Dave McKinley, who backed the huge $1 trillion bipartisan infrastructure law. The two incumbents were forced into the same district after West Virginia lost a House seat through reapportionment. While McKinley represented more voters in the new district, Trump’s endorsement could make a big difference.”

“In Nebraska, Trump has backed Charles Herbster, a wealthy farmer. Herbster has been accused of groping a number of women, including a state senator.”

NEBRASKA GOVERNOR. Conservative Nebraska, a super PAC funded in part by termed-out Gov. Pete Ricketts, went up with a last minute commercial against wealthy businessman Charles Herbster for Tuesday’s GOP primary that tells the audience, “Herbster joined pageants from Nebraska to Ohio to Bangkok, Thailand all so he could judge countless young women and teen-age girls.” The narrator continues, “What Herbster did? You decide: Unusual, bizarre, or inappropriate.” The commercial does not mention that eight women have accused Herbster of groping and other forms of sexual assault at several different venues, including beauty pageants.

“Over time, that lie has become heavier as I have been abused by the family of the man I worked for as a volunteer. The burden of carrying this lie – while being attacked for 14 consecutive years by the bully Megan McCain – has finally reached its end for me.”

“When Josh Zygielbaum left the Marine Corps more than ten years ago, he thought he would never have to wear body armor again,” ABC News reports.

“But now Zygielbaum is back to wearing a bulletproof vest as a Colorado county clerk — one of the many extreme measures he says he’s been forced to take as the state has emerged as a battleground in the shadowy world of election conspiracies.”

PENNSYLVANIA U.S. SENATOR. “Kathy Barnette has been outspent 358-to-1 on TV in Pennsylvania’s GOP primary for the Senate. She hasn’t run for statewide office before. She doesn’t have former President Donald Trump’s endorsement,” Politico reports.

“But the ultra-MAGA commentator is surging in the polls anyway in the final weeks of one of the most expensive and closely watched races in the country.”

PA-Sen: Former hedge fund manager Dave McCormick is airing a new commercial questioning Donald Trump’s decision to endorse TV personality Mehmet Oz for next week’s Republican primary, a tactic that did not go well when Josh Mandel’s Club for Growth allies tried it for the Ohio Senate race. McCormick’s commercial features a clip of Fox News talking head Laura Ingraham asking a guest, “Do you think the Trump endorsement of Oz was a mistake?” The audience is then treated to clips of Oz doubting conservative orthodoxy on abortion before the spot jumps back to Ingraham answering her own question: “I’ll say it. I’m not afraid to say it. It was a mistake to endorse Oz.”

McCormick is also airing what may be the most transphobic commercial for a primary that’s been full of them. It opens with old clips from Oz’s show where he says, “Imagine your child is transgender … could you make a decision to let your child live as the other sex … even alter their body?” It later deploys debate footage of McCormick trashing Oz for “supporting those conversations about transgender transitions.”

NORTH CAROLINA 11TH CD. Daily Beast: “Few in politics have seen anything like the ever-worsening public relations trainwreck that has consumed the political career of Rep. Madison Cawthorn (R-NC). The unrelenting pile-up of damaging stories, insiders say, is the clear handiwork of political players determined to take out the 26-year old MAGA hero in the May 17 primary election.”

Rolling Stone: “Just a month after he invited Cawthorn to speak at a North Carolina rally, Trump has grown increasingly annoyed and disappointed with his MAGA apprentice. The twice-impeached former president has described some of what he’s heard about Cawthorn’s latest woes — and the online sexual imagery associated with it — as ‘gross.’”

One source “said that lately Trump had voiced bewilderment and disgusted confusion about what he’d been told of the flood of leaks and footage, asking at one point in recent days if one of the allegations was that Cawthorn was ‘fucking his cousin?’”

Said another: “President Trump is completely weirded out by the allegations.”

2024. “Gavin Newsom sounds like a man ready to jump on the next flight to Iowa or New Hampshire or wherever Democrats start their 2024 presidential campaign,” the Los Angeles Times reports.

“Those around Newsom say he has never openly hankered after the White House, and he has apparently never had any sort of in-depth discussion with his political team about running for president. Publicly, he insists nothing could be further from his mind.”

Politico: “Daunting national headwinds have stifled Democratic recruitment in many places, and some potential contenders opted to wait for a more promising year. But party operatives have landed top-tier Democratic candidates in many Biden-won districts, in part thanks to new favorable district lines. Their biographies range from state legislators to Navy veterans to lifelong public school educators.”

NEW YORK GOVERNOR. Wealthy businessman Harry Wilson has launched an ad for the June 28 GOP primary bashing Rep. Lee Zeldin for voting for Democrat Andrew Cuomo’s budgets as a state senator, and it even uses an old clip of Zeldin gushing to the not-yet-disgraced governor, “If you were in the White House right now, our nation would be a better place.”

State of Politics notes that Zeldin’s praise comes from a decade ago when Republicans were only too happy to extol the popular Cuomo and favorably contrast him to Barack Obama; things began to change, though, in 2013 when Cuomo supported gun safety legislation following the Sandy Hook massacre, and few Republicans were sorry to see him resign last year.

Kahele, who would be the second person of Native Hawaiian ancestry to lead the state (the first was John Waihee, who was governor from 1986 to 1994), also revealed that he would rely on public financing. Civil Beat’s Nick Grube explains that, in order to qualify for the state’s matching funds program, the congressman would need to raise at least $100,000 from donors who contribute no more than $100: While participating candidates can also raise money in larger increments, Kahele says he’ll decline any donation larger than $100. What Kahele cannot do, though, is transfer the $456,000 he has in his federal war chest to his new campaign for state office.

If he successfully brings in $100,000 from small donors, the Hawaii Campaign Spending Commission would supply Kahele with that amount in matching funds; candidates taking part in the program can receive a maximum of just over $208,000 from the state for the primary, and they’d be required to restrict their spending to about $2 million. (The amounts are the same for the general election.) The last gubernatorial candidate to qualify for matching funds was Ige in his successful 2014 primary bid against Gov. Neil Abercrombie, though he started his own campaign far earlier in the cycle than Kahele is now.

Kahele has attracted negative attention in recent weeks for casting numerous proxy votes from outside D.C. and for continuing to work part-time as a Hawaiian Airlines pilot. The congressman, who says he will remain in office as he runs for governor, has defended his proxy votes by saying that he’s worried about bringing coronavirus variants to his multi-generational home.

ALABAMA U.S. SENATOR. The Republican firm Moore Information, which the Alabama Political Reporter says is working on behalf of a “private third party,” finds former Business Council of Alabama head Katie Britt taking first place with 27% in the May 24 GOP primary, while Rep. Mo Brooks and Army veteran Mike Durant deadlock 20-20 for the second spot in the all-but-assured June 21 runoff. An unreleased March poll had Durant beating Brooks 34-24, with Britt lagging in third with 21%.

MISSOURI U.S. SENATOR. Disgraced former Gov. Eric Greitens has publicized an internal from Fabrizio, Lee & Associates that gives him a 26-19 edge over Rep. Vicky Hartzler in the August Republican primary, with Attorney General Eric Schmitt in third with 14%.

“The right-wing One America News Network admitted in a Monday legal statement that there was no widespread voter fraud by Georgia election officials in the 2020 presidential election after having extensively pushed the groundless claim,” Insider reports.

“Employees at the Democratic Congressional Campaign Committee announced Tuesday they have formed the organization’s first union, making it the largest collective bargaining unit in the Democratic Party,” NBC News reports.

NORTH CAROLINA 1ST and 4TH CD. AIPAC’s United Democracy Project has ramped up its spending yet again in two different May 17 Democratic primary contests in North Carolina. In the 1st District, the group has now deployed $1.5 million on ads promoting state Sen. Don Davis. Former state Sen. Erica Smith, by contrast, has benefited from only about $100,000 in outside spending.

In the 4th, meanwhile, OpenSecrets reports that AIPAC has now dropped nearly $1.5 million in messaging supporting state Sen. Valerie Foushee. Altogether AIPAC, the crypto-funded Protect Our Future PAC, and a few other groups have spent close to $2.5 million for Foushee. Durham County Commissioner Nida Allam, meanwhile, has received about $205,000 in support, with most of it coming from the Working Families Party. No one has made any independent expenditures to aid the third major Democratic candidate, singer Clay Aiken.