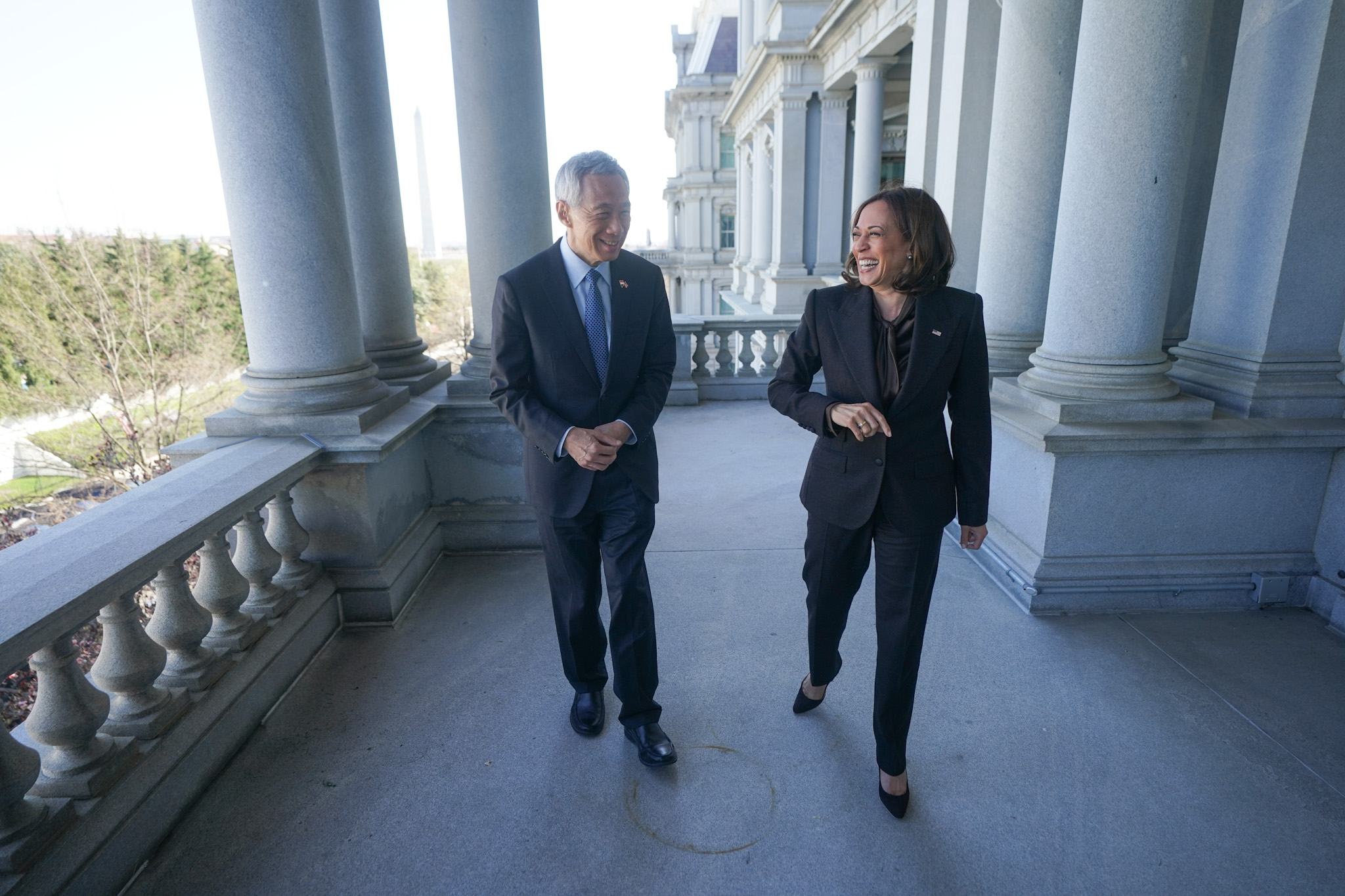 Jonathan Bernstein: “The Cook Report’s Amy Walter points out that whether former President Donald Trump takes another run at the Oval Office or not, the 2024 presidential election will have at least one unusual feature. If President Joe Biden runs for re-election and wins the Democratic nomination, he’ll extend his own record for oldest major-party nominee. If he doesn’t run? Walter calculates that the last person who originally achieved the presidency though election and then chose not to run again was James Buchanan in 1860.”

“That’s a bit tricky; before the two-term limitation kicked in in 1951, the presidents who opted against running for a third term would count, which would make choosing not to run a bit more common. But it’s tricky for another reason, too.”

“Some of those who didn’t run were interested in remaining in the White House — but their parties did not share that interest.”

WV-02: Research America, working on behalf of West Virginia MetroNews, has conducted the first―and probably only―independent survey of Tuesday’s incumbent vs. incumbent Republican primary, and it has some welcome news for Trump-endorsed Rep. Alex Mooney. The firm shows Mooney dispatching colleague David McKinley 48-33, which is only a little smaller than the 50-30 edge Mooney enjoyed in his recent internal. By contrast, we haven’t seen a survey giving McKinley the advantage since March.

Gov. Jim Justice, who is supporting McKinley, used a joint appearance the week before Election Day to say that Trump “made a mistake” with his endorsement in this race, but there’s no indication the GOP’s supreme leader agrees. Still, while Trump held a telephone rally for Mooney on Monday, the one thing he doesn’t seem willing to do is actually physically venture to West Virginia to help him. However, the former Maryland state senator may be the last person on the planet who would actually care about that kind of thing: Indeed, Mooney spoke Friday at a Trump event in Pennsylvania, where the GOP leader was promoting Senate candidate Mehmet Oz.

Mooney also is finishing his campaign by once again reminding viewers he’s Trump’s man. His new commercial makes use of audio of Trump saying, “Alex is the only candidate in this race that has my complete and total endorsement,” before the narrator praises him as “the one candidate who defended Trump from Pelosi’s Jan. 6th witch hunt.” The spot doesn’t mention McKinley, who supported creating a Jan. 6 commission: McKinley, as we recently wrote, is finishing his advertising in a more dramatic fashion with a spot that shows a digitally altered image of Mooney in a prison jumpsuit.

OHIO 9TH CD. “J.R. Majewski, the Air Force veteran who won the GOP primary for Ohio’s new 9th Congressional District, was a January 6 rally participant and has repeatedly shared pro-QAnon material — including a video showing him painting his lawn to say Trump 2020 with ‘Q’ replacing the zeros,” CNN reports.

FLORIDA 7TH CD. Army veteran Cory Mills is trying to generate some national attention in the August Republican primary for this newly gerrymandered seat with a commercial where Mills is shown wearing camouflage and holding an assault rifle while he brags, “I came home and started a company making riot control munitions for law enforcement. You may know some of our work.” The audience is then shown a montage of tear gas being used on what the on-screen text labels as “Hillary Clinton protesters,” “left wing protesters,” “antifa rioters,” “Black Lives Matter protesters,” and “radical left protesters.”

The camera then goes back to Mills, who smugly says, “And now the liberal media’s crying about it.” After the candidate is depicted firing a gas weapon himself, he concludes, “If the media wants to shed some real tears, I can help them out with that.” Mills’ campaign says the spot will have “six-figure[s]” behind it.

GEORGIA 6TH CD. Donald Trump on Thursday endorsed former state ethics commission chair Jake Evans, whose father is a prominent donor and former Trump ambassador to Luxembourg, for the May 24 primary for a suburban Atlanta seat that the GOP drew up to be safely red. That same day physician Rich McCormick, who was the party’s nominee last cycle in the old 7th District, released an early May Public Opinion Strategies poll that shows him leading Evans 38-13, with pastor Mallory Staples at 7%. A runoff would take place the next month should no one win a majority.

GEORGIA 14TH CD. An administrative law judge in Georgia has concluded that Republican Rep. Marjorie Taylor Greene can appear on the ballot, rejecting a challenge from voters who argued her behavior surrounding the Jan. 6 attack on the Capitol made her ineligible to run under a provision of the Constitution barring those who’ve “engaged in insurrection” from serving in Congress. Late on Friday, Republican Secretary of State Brad Raffensperger accepted the judge’s finding, giving final approval to Taylor Greene appearing on the ballot.

MINNESOTA 1ST CD. Politico reports that Defending Main Street, a group devoted to ensuring that Republicans have a “governing majority,” will spend $600,000 on a TV ad campaign for former Department of Agriculture official Brad Finstad ahead of the May 24 special election primary. Finstad also has earned the backing of Minnesota’s largest police union, the Police and Peace Officers Association.

NORTH CAROLINA 4TH CD. State Sen. Valerie Foushee’s allies at EMILY’s List have released an internal from Impact Research that shows her leading Durham County Commissioner Nida Allam 35-16 in the May 17 Democratic primary, with singer Clay Aiken at 10. This is the first survey we’ve seen of the contest to succeed retiring Rep. David Price in this safely blue constituency in the Durham and Chapel Hill area.

Allam herself is running a commercial where she speaks directly to the camera and tells the audience, “Last year, I had an abortion that saved my life. Now, the Supreme Court is taking away our right to choose.” She continues, “People like us won’t have access to care. And we will die. That’s what’s at stake.” Allam goes on to allude to the $1.8 million that outside groups have spent so far to aid Foushee by saying, “Super PACs are spending millions trying to silence me, but our movement is stronger than that.” The candidate, after noting she has the backing of both Elizabeth Warren and Bernie Sanders, implores the viewer, “Join us. Defend our right to choose.”

TEXAS 15TH CD. Democratic Majority for Israel has launched a $244,000 ad campaign in support of Army veteran Ruben Ramirez ahead of his May 24 Democratic runoff against businesswoman Michelle Vallejo, which makes this the first outside spending on either side. The commercial touts Ramirez’s time as a soldier, teacher, and lawyer, and argues he’ll “fight to protect Social Security and Medicare.”

“The conventional view of J.D. Vance’s victory in Ohio’s Senate primary this week was that it demonstrated the power of Donald Trump’s endorsement,” Politico reports.

“But the election results also delivered something else: an outline of the 2024 GOP primary’s establishment lane, the one expected to be occupied by the likes of Govs. Asa Hutchinson of Arkansas or Larry Hogan of Maryland, former Gov. Chris Christie of New Jersey or someone else from the party’s traditionalist wing.”

“In a crowded contest in which a field of free-spending Republicans competed for the Trump vote, the performance of the one serious contender who distanced himself from the former president proved revealing.”

“GOP ward leaders voted to oust one of their own Saturday, hours after an Inquirer story highlighted his role in diverting dozens of mail ballots for Republican voters in South Philadelphia to a P.O. box under his control, raising concerns of a potential ‘ballot harvesting’ scheme,” the Philadelphia Inquirer reports.

Wisconsin congressional candidate Derrick Van Orden (R) “was found with a gun in his carry-on bag at an Iowa airport last year, netting him two fines for what he called a mistake,” the Milwaukee Journal-Sentinel reports.