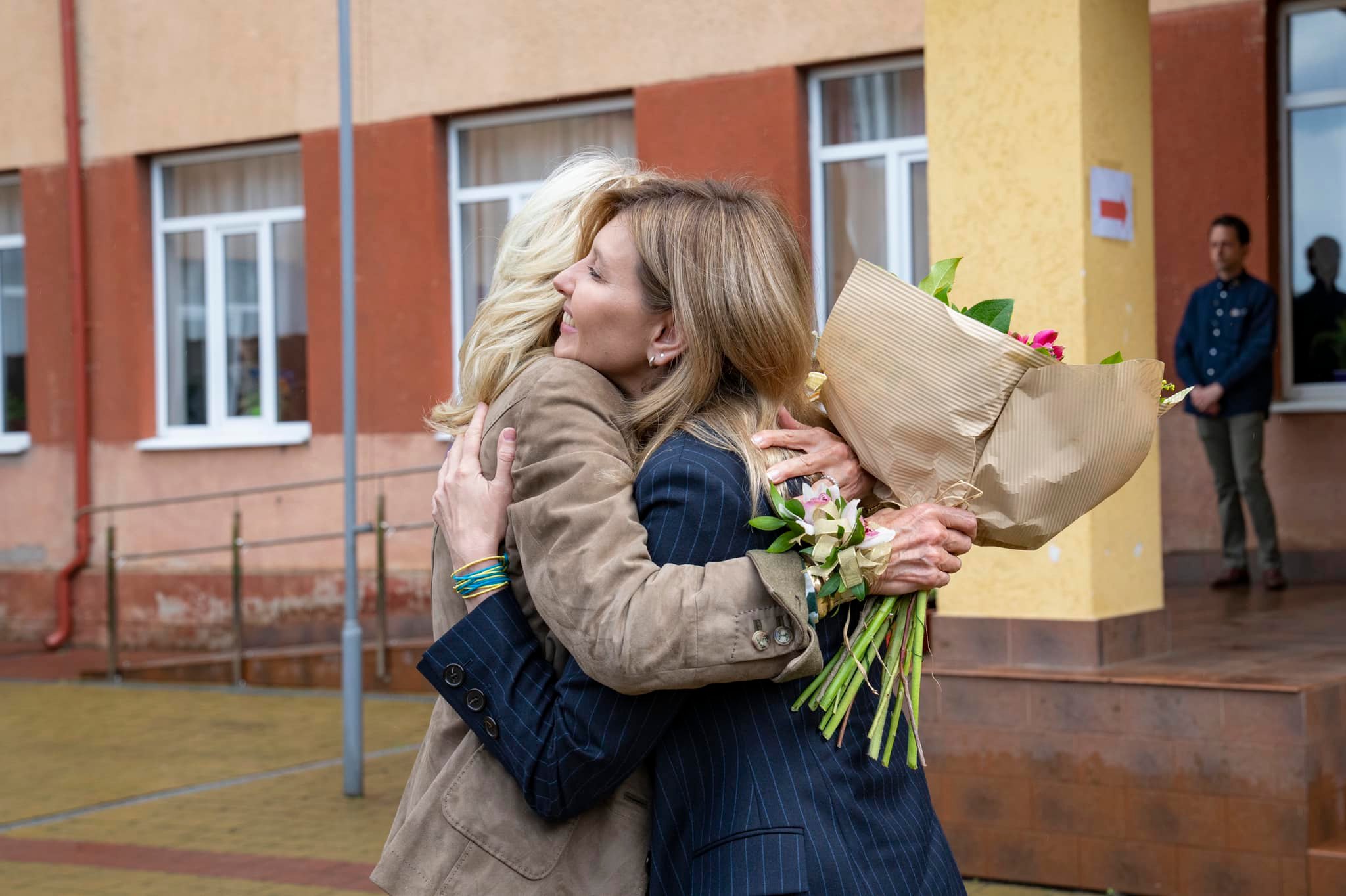 “Jill Biden, the first lady, traveled to western Ukraine in an unannounced trip on Sunday, the latest sign of support from the United States, which has significantly increased military aid for Ukraine in recent weeks,” the New York Times reports.

“Dr. Biden met Ukraine’s first lady, Olena Zelenska, at a school in Uzhhorod, a town of 100,000 people a few miles from the border with Slovakia. The town’s population has doubled in recent weeks with the arrival of people fleeing fighting elsewhere in the country.”

Said Mrs. Biden: “I wanted to come on Mother’s Day. I thought it was important to show the Ukrainian people that this war has to stop and this war has been brutal and that the people of the United States stand with the people of Ukraine.”

Said McConnell: “With regard to the abortion issue, I think it’s pretty clear where Senate Republicans stand.”

He added: “And if and when the court makes a final decision, I expect everybody will be more definitive. But I don’t think it’s much secret where Senate Republicans stand on that issue.”

Washington Post: “In the aftermath of the leaked draft of a Supreme Court opinion that would overturn Roe, Democrats are working hard to underline for voters which party is dismantling abortion protections and which one is defending them, hoping Republicans pay a price at the polls.”

“But the Democrats’ message also in a sense reflects how powerless they have been in Washington, even when they control the levers of power. They have failed to codify Roe, failed to prevent a conservative judiciary and failed to change the filibuster to enact their agenda.”

A judge on Friday dismissed a lawsuit by former President Donald Trump seeking to lift his ban from Twitter, CNBC reports.

Said Musk: “This is false.”

“Elon Musk’s decision to accept some foreign investors as part of his $44 billion buyout of Twitter runs the risk of inviting the kind of regulatory scrutiny over U.S. national security that social media peer TikTok faced,” Reuters reports.

Dr. Anthony Fauci this week “privately criticized the decision to hold the White House Correspondents’ Dinner, singling it out as a troubling sign that many Americans no longer view Covid as a serious threat,” Politico reports.

“Fauci expressed frustration with the growing perception that the pandemic is effectively over. He said he feared people are losing sight of the need to continue protecting the nation’s most vulnerable.”

“The Satanic Temple in Massachusetts is requesting that Boston fly its flag, after the Supreme Court ruled this week that the city had violated the First Amendment rights of a Christian group when it denied them flying their flag outside of City Hall,” CNN reports. Well, if one religion is allowed to fly a flag on government property, then all religions, every single one, must be permitted to do so as well. That’s Freedom of Religion, and if one constitutional conservative complains about, they reveal themselves as a theocratic fascist.

Wall Street Journal on the Biden Administration’s internal debate about ending some Chinese tariffs: “On one side of the debate within the administration are Treasury Secretary Janet Yellen and Commerce Secretary Gina Raimondo, who favor easing the tariffs on some of the roughly $360 billion annually of Chinese imports put in place under the Trump administration.”

“On the other are Trade Representative Katherine Tai and others who are reluctant to relinquish U.S. leverage over China in a continuing effort to reshape Chinese economic behavior.”

House Majority Whip Jim Clyburn (D-SC) “charged into a raging national firestorm over abortion rights Wednesday as he visited Texas to campaign with Rep. Henry Cuellar (D-TX), a rare Democrat who opposes the practice, in his hotly contested primary runoff,” the Texas Tribune reports.  Said Clyburn: “We have a big-tent party, and if we’re gonna be a big-tent party, we got to be a big-tent party. I don’t believe we ought to have a litmus test in the Democratic Party. I think we have to bring as many people into the party as we possibly can.”

“A top financier for Donald Trump’s re-election campaign and the legal charade to overturn the results of the 2020 U.S. Presidential election spent three days in 2019 on a now-seized superyacht owned by an influential Russian oligarch,” Forensic News reports.

Rep. Marjorie Taylor Greene (R-GA), like most of her Republican colleagues, says she’s opposed to proxy voting, Insider reports. But Greene has voted remotely 22 times and cast 135 votes on behalf of fellow Republicans, according to a review of over 700 roll call votes taken by the House between May 20, 2020 and April 30, 2022.

“More than 200 sailors have moved off the USS George Washington aircraft carrier after multiple deaths by suicide among the crew, including three in less than one week in April,” CNN reports.

“The Irish nationalist party Sinn Fein, which seeks unification with Ireland, hailed a ‘new era’ Saturday for Northern Ireland as it captured the largest number of seats in the Northern Ireland Assembly for the first time in a historic win,” the AP reports.

“The victory means Sinn Fein is entitled to the post of first minister in Belfast for the first time since Northern Ireland was founded as a Protestant-majority state in 1921.”

Russian generals are “turning in on themselves” because the war in Ukraine is not going to plan, the Times of London reports. The British defense chief said military leaders were blaming each other for the “disaster” and feared being purged if the “quagmire” turns into a panicked retreat.

Playbook: “The war in Ukraine has seen the U.S. share unprecedented levels of intelligence with Kyiv. And Western governments have stepped up preemptive public disclosures of intelligence to undermine Russian messaging.”

“But this week, the White House has started to worry that the intel is getting too public.”

Tom Friedman reports that Biden said “in the strongest and most colorful language that this kind of loose talk is reckless and has got to stop immediately — before we end up in an unintended war with Russia.”

“The staggering takeaway from these leaks is that they suggest we are no longer in an indirect war with Russia but rather edging toward a direct war — and no one has prepared the American people or Congress for that.”

“Idaho’s dominant Republican Party is at war with itself up and down the ballot ahead of its May 17 primaries,” Politico reports.

“It’s not just Gov. Brad Little, whose reelection campaign became national news when Donald Trump endorsed a primary challenge from Lt. Gov. Janice McGeachin. The state attorney general is staring down a challenge from a former rabble-rousing member of Congress. The senior of Idaho’s two GOP House members is facing a primary that has drawn millions in spending. And contentious open races for lieutenant governor and the secretary of state — Idaho’s chief election official — echo some of the national divisions within the party.”