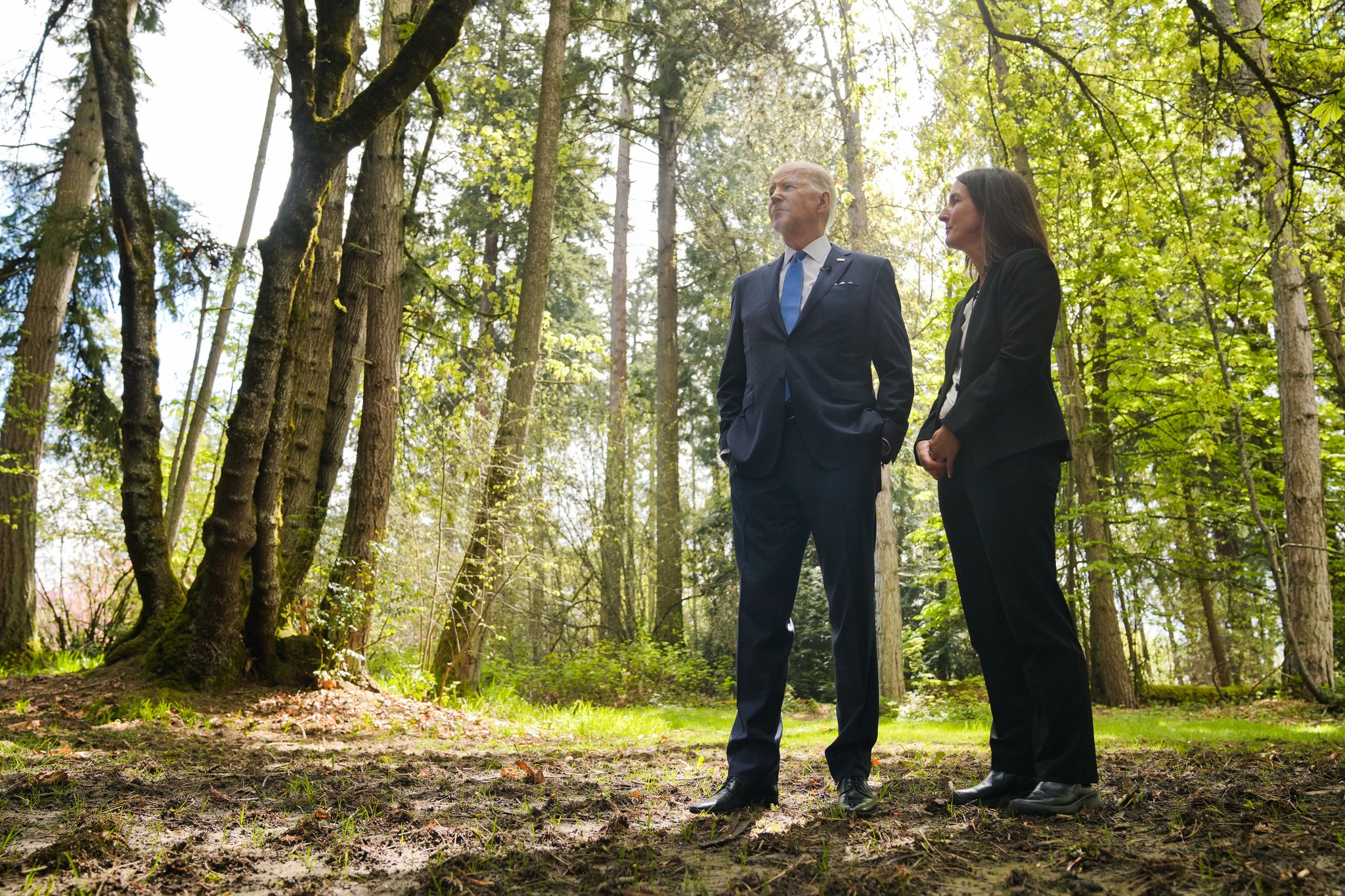 A new Washington Post-ABC News poll finds that 54% of Americans think the 1973 Roe v. Wade decision should be upheld while just 28% believe it should be overturned — a roughly 2-to-1 margin.

Americans are also split on who should decide whether abortion is legal or not: 38% say the federal government, 34% say each state government, and 28% are unsure.

J.D. Vance (R) won the Republican nomination for U.S. Senate in Ohio and will face Rep. Tim Ryan (D) in the general election, according to the Cook Political Report. Vance won 32% of the primary vote to Josh Mandel’s 25% and Matt Dolan’s 22%.

“Former president Donald Trump’s sway over Republicans in this year’s midterms will be tested on Tuesday in a crowded primary for the U.S. Senate in Ohio — one of two states where voters are heading to the polls,” the Washington Post reports.

“Republican primary voters will select their nominee to fill an open Senate seat from a group that includes a candidate backed by Trump, three others who have touted ties to him and one who has rejected the former president’s false claims that the 2020 election was stolen.”

ALABAMA 5TH CD. The May 24 Republican primary for this safely red open seat was a pretty low-key affair until last week, but that all changed when former Department of Defense official Casey Wardynski’s allies at the nihilist House Freedom Caucus dropped $192,000 on TV spots, plus another $83,000 on digital ads, attacking Madison County Commission Chairman Dale Strong. Wardynski and Strong are the only candidates who have brought in a serious amount of money in the contest to succeed Senate candidate Mo Brooks.

The commercial accuses Strong of voting to put a tax increase on the ballot and having “stood with the radical woke left and supported relocating an historic Civil War statue in Madison County.” (Strong maintains that he took action to protect that Confederate monument from damage.) The Freedom Caucus then goes after the commissioner for daring to donate to George W. Bush and Mitt Romney but not Trump. The ad does not mention Wardynski, who recently made a remarkably stiff appearance in his own spot.

CALIFORNIA 13TH CD. Financial advisor Phil Arballo’s first commercial for the June 7 top-two primary goes after his fellow Democrat, Assemblyman Adam Gray, from the left. The ad features several local people arguing that the assemblyman has aided oil companies while benefiting from their donations, and that he “even stood with Donald Trump when Trump let polluters put our water at risk.” The final third of the commercial praises Arballo, who was the 2020 nominee in the old 22nd District, as someone who “rejects corporate PAC money.”

FLORIDA 4TH CD. State Rep. Jason Fischer announced Monday that he was joining the Republican primary for the open 4th District, a Jacksonville-area seat that Trump would have taken 53-46.

FLORIDA 15TH CD and 7th CD. Retired Navy Captain Mac McGovern, who launched a bid for the old 7th District in January before redistricting was completed, said Monday that he’d compete in the August Republican primary for the new 15th instead.

FLORIDA 15TH CD. Political consultant Gavin Brown has announced that he’ll seek the Democratic nomination for this new 51-48 Trump seat in the northeast Tampa suburbs, arguing that it’s vital to have “candidates who can compromise in the middle.” Brown, who would be the star’s first LGBTQ member of Congress, joins a primary that includes comedian Eddie Geller. The GOP side pits former Rep. Dennis Ross, who represented a previous version of the 15th District, against state Rep. Jackie Toledo.

Russell, who serves on the local equivalent of the city council, had been waging a longshot campaign against Republican Sen. Marco Rubio, but he’d struggled to gain traction in the August primary against 10th District Rep. Val Demings. Russell, however, said Sunday he would run against Salazar instead: The commissioner ended March with $285,000 in the bank that he can use on his new House race, though the GOP congresswoman had $1 million available.

That same day, Higgins’ campaign manager also confirmed his boss would challenge Salazar. Higgins pulled off an upset victory in 2018 to claim her seat on the county commission in a special election, a victory that flipped the body to a Democratic majority. She went on to win a close race for a full four-year term in 2020, though she’ll need to step down to campaign for Congress under Florida’s resign-to-run law. (Russell, who is termed out next year, already said he’d resign to pursue his aborted Senate bid.)

NORTH CAROLINA 13TH CD. The Club for Growth, which supports law student Bo Hines in the packed May 17 Republican primary, is running a negative ad here for the first time by targeting self-funding attorney Kelly Daughtry. The Club tells the audience that Daughtry donated to a Democrat, Mark Davis, running for the North Carolina Supreme Court in 2020 “when Republicans were fighting to take back the court.”

There actually weren’t enough seats on the ballot that year for Republicans to win a majority on the body even though they won all three of the 2020 contests, including the Davis race, though the Club doesn’t let that stop them from continuing to blame Daughtry for what happened next. The narrator instead continues, “The Democrats kept control, then used their Supreme Court majority to block Republican redistricting plans and draw districts benefiting the Democrats.”

NEBRASKA 2ND CD. Donald Trump used his Sunday rally for gubernatorial candidate Charles Herbster to bash Rep. Don Bacon ahead of next week’s Republican primary for this competitive seat and to implore his audience to vote for roofer Steve Kuehl. “Now I don’t know Steve,” Trump continued, who he said was a nice guy he just met. “Good luck, Steve, whoever the hell you are.” Plenty of local GOP voters will be asking who the hell Kuehl is too, since he ended March with a negative balance in his campaign account.

Trump, naturally, said he wasn’t actually endorsing Kuehl, which is a good way for him to avoid a dreaded L on his precious win-loss primary record. Over in the real world, though, telling voters to vote for a candidate is an endorsement no matter what Trump and his minions actually insist on labeling it.

OREGON 6TH CD. Protect Our Future PAC has thrown down another $735,000 to aid economic development adviser Carrick Flynn, which brings the crypto-aligned group’s total investment to $8.76 million with two more weeks to go before the Democratic primary.

TEXAS 28TH CD. AIPAC’s new United Democracy Project is spending at least $333,000 against attorney Jessica Cisneros ahead of her May 24 Democratic runoff against conservative Rep. Henry Cuellar, with its TV ad arguing she would jeopardize Border Patrol jobs.

TEXAS 34TH CD SPECIAL ELECTION. Republican Mayra Flores and the NRCC have released the first poll we’ve seen of the June 14 all-party special election primary, a Ragnar Research internal that shows Flores and Democrat Dan Sanchez advancing to an all-but-assured runoff in the current version of this 52-48 Biden seat. Flores outpaces Sanchez 24-19, with two other candidates, Democrat Rene Coronado and Republican Juana Cantu-Cabrera, taking 9% and 7%, respectively. A hefty 41% are undecided, which makes it especially hard to draw any conclusions from this survey.

WEST VIRGINIA 2ND CD. Democratic Sen. Joe Manchin not only has endorsed Rep. David McKinley ahead of next week’s Republican primary against fellow incumbent Alex Mooney, he’s also starring in a commercial praising McKinley. The senator begins by telling the audience that, as someone who opposed the Biden administration’s Build Back Better program, he knows that Mooney “and his out of state supporters” are lying when they say McKinley supported the program. “David McKinley has always opposed reckless spending,” says Manchin, while “Alex Mooney has proven he’s all about Alex Mooney.”

It’s very rare for a high-profile politician, even a conservative Democrat like Manchin, to take sides in the other party’s primary, much less cut an ad for it, though McKinley’s camp is arguing he’ll be an asset with GOP voters. An unnamed source at the McKinley campaign told columnist Steven Allen Adams, “In our polling, Manchin has consistently been in the mid to high 60s favorables among Republican primary voters,” though they didn’t actually release any polls.

Mooney, by contrast, is only too happy to publicize his own internal from Public Opinion Strategies showing him defeating McKinley 50-30, which is nearly double his margin from just a few weeks ago. The last survey we saw giving McKinley the lead, by contrast, was a March poll for the West Virginia Chamber of Commerce that gave him a small 38-33 edge; the group went on to endorse McKinley after those numbers were released.

“With the balance of the House of Representatives at stake, national Democrats made an 11th-hour appeal to a federal court on Monday to intervene in New York’s heated redistricting dispute, hoping to reinstate House maps thrown out by the state’s highest court last week,” the New York Times reports.

“In a 17-page complaint, they argued that there simply was not enough time to implement the order from the State Court of Appeals for new district lines and still comply with a longstanding federal court order meant to protect the rights of Americans casting ballots from overseas.

“Former President George W. Bush will appear at a fundraiser for Georgia Gov. Brian Kemp in Texas this month, wading into one of the year’s highest profile primaries to help a Republican targeted for extinction by Donald Trump,” Politico reports.

Politico: “President Joe Biden and his team are hoping to spend the spring and summer months drawing sharp distinctions with Republicans, one in particular. They still plan to push forth revived pieces of stalled agenda. But they’re also eagerly awaiting potentially explosive findings from the Jan. 6 select committee and hope those discoveries can inflame a battle brewing within the GOP over former Trump’s legacy and power.”

“The goal of turning the election into a contrast may be straightforward. But the execution is another matter entirely. Previous efforts to reframe the conversation have failed, as the White House has been overtaken by outside forces, leaving the president unable to stay on message and Democrats frustrated with a lack of direction coming from the West Wing. And a number of outside groups and Democratic advisers have been baffled by a lack of coordination on key issues. Four Democrats close to the White House said that officials there do not frequently provide surrogate talking points — a key component for any political operation to stay on message.”

Chloe Maxmin and Canyon Woodward: “We say this with love to our fellow Democrats: Over the past decade, you willfully abandoned rural communities. As the party turned its focus to the cities and suburbs, its outreach became out of touch and impersonal. To rural voters, the message was clear: You don’t matter.”

“Now, Republicans control dozens of state legislatures, and Democrats have only tenuous majorities in Congress at a time in history when we simply can’t afford to cede an inch. The party can’t wait to start correcting course. It may be too late to prevent a blowout in the fall, but the future of progressive politics — and indeed our democracy — demands that we revive our relationship with rural communities.”