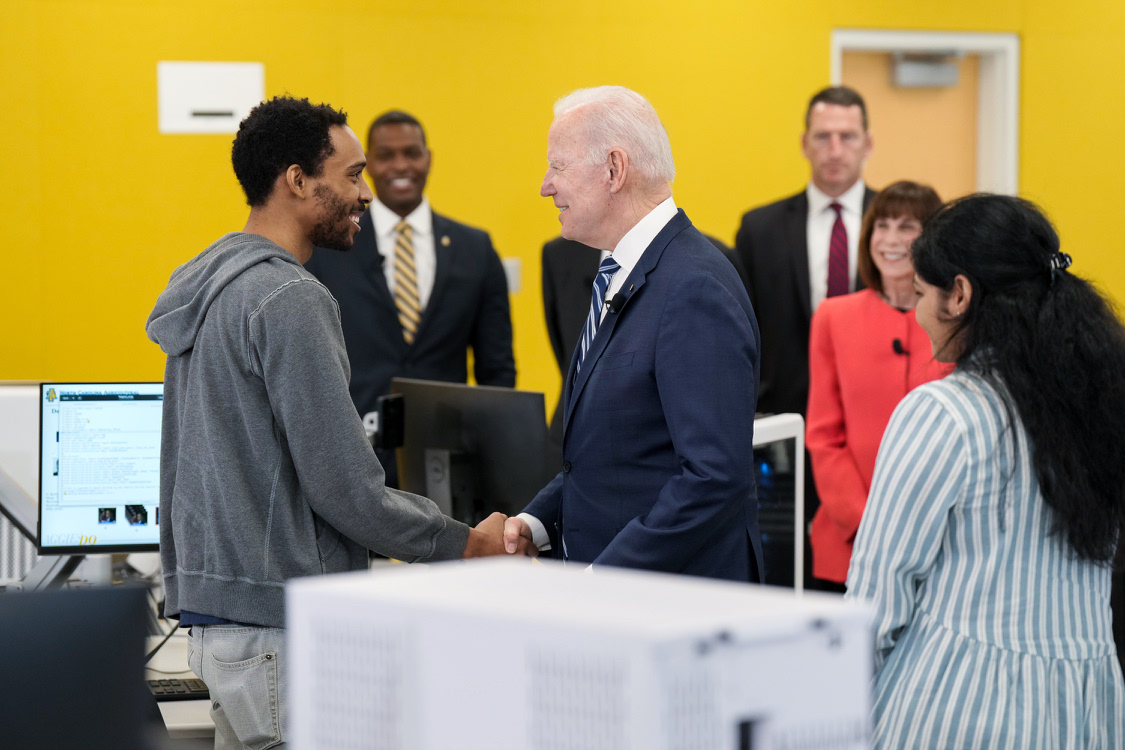 A new Washington Post-ABC News poll finds President Biden’s standing with Americans has improved slightly over the past two months, but he remains in negative territory in most assessments of his performance in office and Republicans hold substantial advantages over Democrats on key economic indicators that are shaping the midterm election year.

With a 42% approval rating overall, Biden gets low marks on his handling of the economy and inflation and Republicans are significantly more trusted than Democrats on both measures.

Biden’s worst ratings come on the dominant issue of inflation, with 68% saying they disapprove compared with 28% who give him positive marks.

“Two months after Russia launched its invasion of Ukraine, Americans are stalwart in their support of the embattled country, with a large, bipartisan majority supporting increased sanctions against Russia and most also backing military and humanitarian support for Ukrainians,” according to a Washington Post-ABC News poll.  “In all, 73 percent say the United States is doing either the right amount or too little to support Ukraine.”

“A second woman has publicly accused Charles Herbster, the Republican candidate for governor in Nebraska endorsed by former President Donald Trump, of groping her at a 2019 Republican fund-raising dinner,” the New York Times reports.

“Elizabeth Todsen said Mr. Herbster grabbed her at the dinner in Omaha and said details of the incident reported earlier this month by the Nebraska Examiner were correct.”

One of the women who had anonymously accused GOP Nebraska gubernatorial candidate Charles Herbster of groping her has now identified herself publicly: Elizabeth Todsen, a former political aide, was among eight women who originally alleged last month that Herbster groped them. Todsen, who alleges that Herbster groped her at a political event in 2019, is the second accuser to reveal her name publicly.

The other named woman who accused Herbster of groping her is Nebraska state Sen. Julie Slama (R), who told the Nebraska Examiner about the incident last month.

Herbster denied Todsen’s allegation and vowed to take “legal action” against her. He filed a lawsuit against Slama last month, and she is countersuing him for sexual battery.

Trump, who has endorsed Herbster, defended him at a rally for him last night and claimed without any evidence that the allegations were a political hit job against the candidate. In fact, the ex-president said it was because of the allegations that he went to the rally; to defend the “badly maligned” Herbster.

Ahead of the Ohio Republican U.S. Senate primary this week, Donald Trump fumbled J.D. Vance’s name at a rally Sunday.  Trump called Vance “J.P.” — then settled on “J.D. Mandel,” swapping his last name with that of his top primary opponent, Josh Mandel.

Politico looks at the “four-week stretch of primaries” where “Trump-endorsed candidates are slogging through difficult races” or “running far behind.”

“The losses Trump is poised to take this month could still do significant damage to him — providing the first ballot-tested, post-presidential confirmation that Trump, while the most important animating factor in the GOP, is not the only force moving primary voters.”

“As Republican primary voters get closer to the polls, it’s beginning to feel like mid-2016 again: Donald Trump and Ted Cruz are on opposing sides,” Politico reports.  “The former president’s late backing of J.D. Vance in Ohio and Mehmet Oz in Pennsylvania is directly at odds with the Texas senator’s favored candidates in two brutal Senate primaries that conclude next month. Cruz endorsed his candidates before Trump — Josh Mandel in Ohio and David McCormick in Pennsylvania — and didn’t exactly plan to go toe-to-toe with his 2016 presidential rival. But Trump’s late interventions certainly aren’t scaring him off.”

“Florida Gov. Ron DeSantis (R) won’t say whether he’ll run for president, but he’s starting to acknowledge that his road to the White House might hinge on a big re-election win this year,” NBC News reports.  “For months, Florida Capitol insiders and Republicans familiar with the governor’s thinking have speculated that a resounding victory in November would strengthen his national bona fides as a top GOP presidential contender — even if his political benefactor, former President Donald Trump, decides to run again.”

“As he flirts with a possible run for president under the shadow of his high-profile break with former President Donald Trump, former Vice President Mike Pence received a warm welcome in Iowa’s deeply conservative 4th Congressional District last weekend,” the Des Moines Register reports.  “Pence has been booed and heckled by conservative groups in other states after he defied Trump and refused to help overturn the 2020 election. But in Carroll, Iowa, where the state party held its district convention at a local high school gymnasium Saturday, Pence was met with interest and enthusiasm.”

“New Hampshire is the leading contender to replace Iowa at the beginning of the Democratic presidential calendar,” Politico reports.

“For decades, Democrats insisted that Republicans would invite a major voter backlash if they took aggressive action to curtail abortion rights,” Politico reports. “Now, as a growing number of GOP-led states do just that, passing a slew of bills curtailing abortion with no exemptions for rape and incest, they fear that voters are uninformed or misinformed about the stakes. And they are sounding the alarm that more is needed to engage voters and warn them that the current slate of laws is just the beginning.”

“Republicans hoping to emerge from crowded primaries this year stacked up on operatives with ties to former President Donald Trump, betting those connections would give them a leg up on landing critical endorsements that would help them win,” the AP reports.  “But as Trump wades into some of the most competitive primaries, the strategy is proving a bust.”

“As Trump seeks to assert himself this election year as the GOP’s undisputed kingmaker, the endorsements are a reminder of the traits that are often most important to him. While he demands loyalty of those around him, he rarely returns it in equal measure. And the former reality television star-turned-president remains dazzled by the power of celebrity in politics.”

New York Times: “Republican leaders and candidates are increasingly claiming without basis that unauthorized immigrants are gaining access to the ballot box.”

“Voter fraud is exceptionally rare, and allegations that widespread numbers of undocumented immigrants are voting have been repeatedly discredited. Yet that fabricated message — capitalizing on a concocted threat to advance Mr. Trump’s broader lie of stolen elections — is now finding receptive audiences in more than a dozen states across the country, including several far from the U.S.-Mexico border.”

Politico: “We’ve run the numbers and all but two of the 35 House Democratic frontline members outraised their Republican opponents during the most recent quarter.”

“That money may not be enough in a hostile political environment but certainly can’t hurt.”

Politico: “The long-term legal activity means that while both parties are preparing to fight on the House battlefield drawn for this year, they are also getting ready for the conflict over political lines to extend far beyond the normal redistricting period that follows each decennial Census — with the potential to change the House map significantly over the next decade.”

“It’s been nearly six years since Todd Young pulled off one of the biggest Senate upsets of 2016,” Politico reports.   “Now, up for reelection in barn-red Indiana, the former chair of the Republican Senate campaign arm has pulled off an even more unlikely victory: avoiding a primary challenger.”

“Young is one of only four Senate GOP incumbents without the golden ticket of a Donald Trump endorsement this year. He has a record of taking some decidedly non-MAGA friendly positions and said Trump bore responsibility for Jan. 6 — in a state Trump carried twice by double-digits.”

Arkansas Gov. Asa Hutchinson (R) said that he’s weighing a White House bid in 2024 and that he would still consider running even if former President Donald Trump enters the race, CNN reports.

Said Hutchinson: “You’ve got to get through, of course, this year. But that’s an option that’s on the table.”