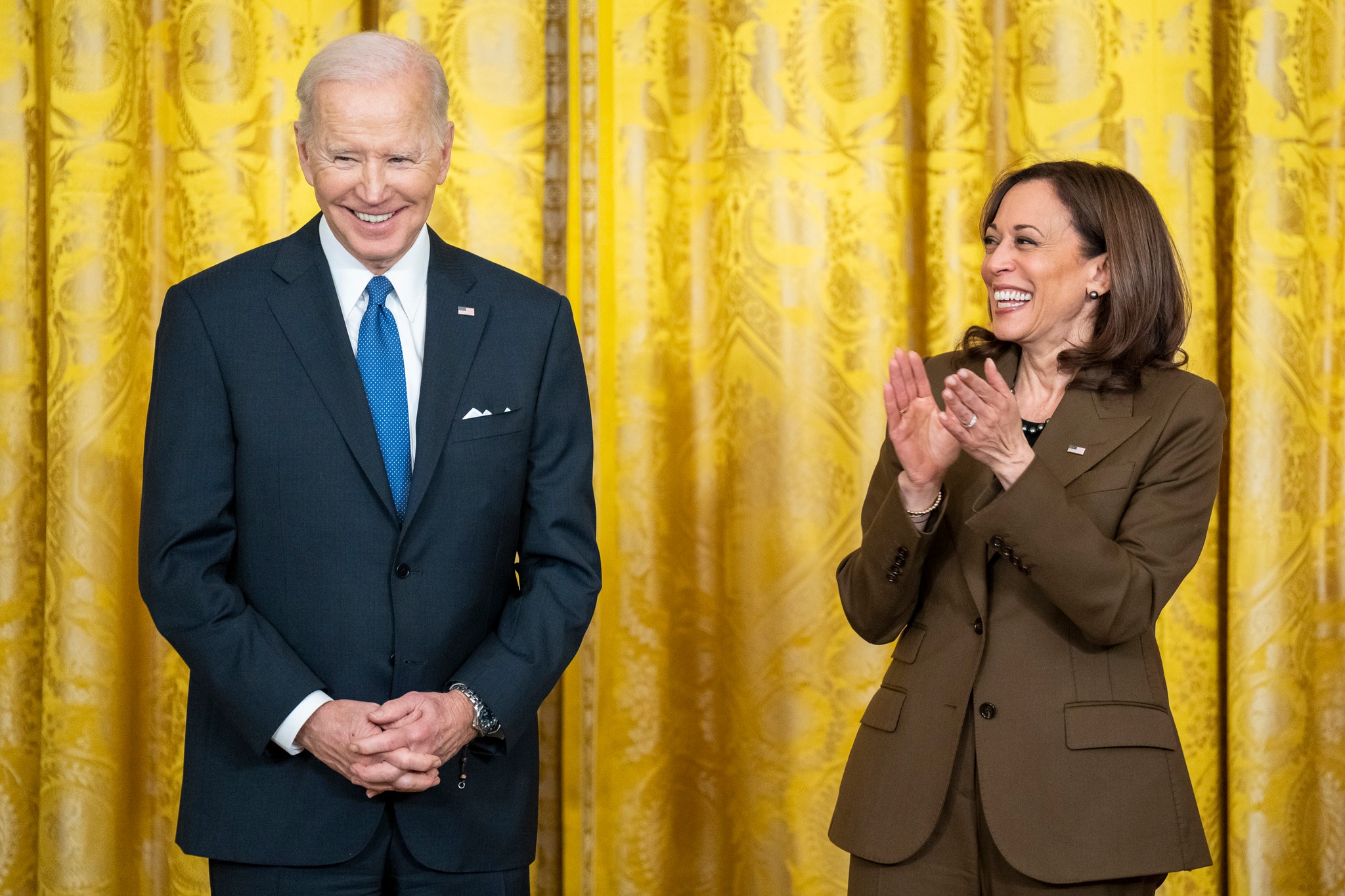 A new NPR/PBS NewsHour/Marist poll finds that 47% of voters said they are more likely to vote for the Republican in their district in this year’s midterm elections, as opposed to 44% who said they would pick a Democrat.

It’s the first time in eight years that Marist’s survey has found Republicans with an advantage on the congressional ballot test.

NEBRASKA GOVERNOR. With less than two weeks to go before Nebraska’s Republican primary for governor, self-funding businessman Charles Herbster is running a TV ad that takes the remarkable tack of directly attacking one of the eight women who’ve accused him of sexual battery, state Sen. Julie Slama, claiming her allegations are part of a scheme orchestrated by a rival candidate, Jim Pillen, and termed-out Gov. Pete Ricketts.

Just last week, Herbster sued Slama for defamation, to which Slama, who’s not on the ballot this year, responded with a counterclaim seeking damages for sexual assault. Her attorney responded to the new ad by saying, “​​Charles Herbster is solely responsible for the harm he inflicted against Senator Slama, and he will answer for it in court.”

Herbster’s female narrator begins by charging that Pillen and Ricketts are telling the same sort of lies that, she claims, were also leveled at Supreme Court Justices Clarence Thomas and Brett Kavanaugh. The spot, which doesn’t mention Slama by name but instead refers to her as “Herbster’s accuser,” says Slama, as well as her husband and sister, received jobs from Ricketts. The voiceover adds that “even after the supposed incident, she kept contacting Herbster” and says Slama “even invited Herbster to her destination wedding.” Pillen’s attacks, the spot concludes, are “built on lies.”

The commercial does not, of course, mention any of the allegations leveled against Herbster by not just Slama but also seven other women, all of whom went unnamed out of fear of retaliation when they spoke with the Nebraska Examiner. All accused him of groping and other forms of sexual assault in incidents from 2017 through this year.

After the explosive report came out, Ricketts denied he had anything to do with the allegations against Herbster, telling Politico that it’s “ridiculous to think that somebody could coordinate eight different people to talk to a reporter about this.” Slama, who has accused Herbster of reaching up her skirt at a 2019 event, has said that the online wedding invitation Herbster is now highlighting was sent to him accidentally, adding that she hadn’t even been aware of the mistake until he RSVPed.

Herbster’s ad comes just before Donald Trump is set to hold a rally for him on Friday outside of Omaha. Trump, Politico writes, responded earlier this month to the allegations against Herbster by “relay[ing] word that Herbster wasn’t fighting back hard enough, backing plans for Herbster to hold a press conference aggressively denying the allegations and pushing back at his adversaries”—advice Herbster, much like Kavanaugh, evidently took to heart. A recent poll found Herbster locked in a close May 10 primary against Pillen and state Sen. Brett Lindstrom.

An email address linked to Charles Herbster (R), embattled Republican Nebraska governor candidate who is backed by Donald Trump, was used to set up an account on the cheating website Ashley Madison, the Daily Mail reports.

“In many cases, the products were commercial failures, cost Walker and his business partners millions of dollars and put his companies into deep debt, for which creditors have repeatedly sued Walker and his associates to recover.”

OHIO U.S. SENATOR. The USA Freedom Fund PAC, which is aligned with the Club for Growth and supports state Treasurer Josh Mandel in Tuesday’s GOP primary, is airing a new TV ad where they go after venture capitalist J.D. Vance for saying in February right before Russia invaded Ukraine, “I don’t really care what happens to Ukraine one way or another,” calling it a betrayal to the thousands of Ukranian Americans in Ohio. The narrator also uses Vance’s bestselling memoir about growing up in Ohio, Hillbilly Elegy, to bash him as a liberal elite for “trashing Ohioans as hillbillies” and selling his story to Hollywood.

“But not Matt Dolan. The state senator has declined to kiss the ring, and instead run as a traditional conservative — pouring $10.6 million of his own money into the effort.”

“Days before the May 3 primary, Dolan appears to be experiencing a late burst of momentum. While J.D. Vance — who received Trump’s endorsement last week — has surged into first place according to the most recent Fox News poll, Dolan was the only other top contender to gain ground in the poll since last month. A separate poll released Tuesday by Blueprint Polling actually placed Dolan in first place with 18 percent of the vote, followed by Vance at 17 percent.”

OHIO GOVERNOR. Former Dayton Mayor Nan Whaley has received an endorsement from Rep. Joyce Beatty, who represents a very blue seat based around Columbus, days ahead of Tuesday’s Democratic primary.

NEVADA GOVERNOR. Donald Trump has endorsed Clark County Sheriff Joe Lombardo in the crowded June Republican primary to take on Democratic Gov. Steve Sisolak. Lombardo, unlike some of the other candidates Trump has backed, was arguably already the favorite to advance, as he both ended March with a wide cash-on-hand edge over the rest of the GOP field and posted leads in the only two polls we’ve seen in months.

NEW MEXICO GOVERNOR. Just two days after state Rep. Rebecca Dow released the first negative ad in the June Republican primary by labeling former TV news meteorologist Mark Ronchetti a “Never Trumper,” Ronchetti fired back with his own spot criticizing Dow. Ignoring her charges against him, Ronchetti calls Dow a phony for her tough talk on immigration, citing roll call votes to claim she voted for two bills to give stimulus checks and job licenses to undocumented immigrants.

GEORGIA GOVERNOR. A new SurveyUSA poll in Georgia finds Gov. Brian Kemp (R) with a 25-point edge on David Perdue (R) in the Republican gubernatorial primary, 56% to 31%. In a possible general election match up, Kemp leads Stacey Abrams (D), 50% to 45%.

The conservative firm Guidant Polling and Strategy has released a survey on behalf of a group called the Georgia Leadership Coalition that looks at the May 24 GOP primary and finds Gov. Brian Kemp holding a huge 57-31 lead over former Sen. David Perdue. This release follows on the heels of a few other pollsters similarly finding Kemp solidifying his long-running advantage and surpassing the 50% threshold needed to avoid a June runoff.

Meanwhile, a federal judge on Thursday ruled that Kemp’s allies at Georgians First Leadership Committee, which is not subject to contribution limits, cannot raise money unless and until Kemp wins the Republican nomination; there is no word yet if the governor will appeal. The same judge said back in February that Georgians First could not continue to air ads to help Kemp in his nomination fight against former Sen. David Perdue because Perdue and other non-incumbents cannot create their own leadership committees unless and until they win their primary.

“A federal judge ordered a special committee to suspend raising campaign money for Gov. Brian Kemp’s reelection bid until the GOP gubernatorial nomination is decided, temporarily eliminating what had been a major advantage Republican lawmakers carved out for him,” the Atlanta Journal Constitution reports.

ARIZONA GOVERNOR. Former Democratic state Rep. Aaron Lieberman has put $562,000 behind his debut ad ahead of the August primary, which features the candidate speaking next to a literal dumpster fire as a metaphor for the state of the race. Lieberman berates GOP frontrunner Kari Lake for appearing at rallies with neo-Nazi sympathizers and castigates Democratic Secretary of State Katie Hobbs for having been “found guilty of racial discrimination” by two federal juries, which Lieberman follows by pledging to focus on solving problems such as fixing schools and creating jobs as he uses a fire extinguisher to put out the blaze.

Lieberman’s claim against Hobbs references a matter from last decade when Hobbs led Democrats in the state Senate, which involved a Black woman named Talonya Adams who claimed that she was fired from her position as a Senate staffer in 2015 after complaining about being paid less than her white male colleagues. After a 2019 verdict in favor of Adams had been tossed out, a jury last year awarded Adams $2.75 million in damages, which a judge later reduced to $300,000 plus back pay.

Hobbs wasn’t a defendant in Adams’ lawsuit, though she had testified that she had been part of the group that fired Adams after it lost “trust and confidence” in her, but her campaign had defended Hobbs in response to the verdict by pointing out that “the Republican majority chief of staff acted as … the ultimate decision-maker regarding the termination” of Adams’ employment. While Hobbs had offered an initial apology after the 2019 verdict, she extensively apologized in a statement late last year that acknowledged the discrimination against Adams and conceded that her initial response to last year’s verdict was “unnecessarily defensive” and “fell short of taking real accountability.”

This matter has proved divisive for Hobbs, who started off the race as the frontrunner, and it led to some prominent Black leaders in the state calling on voters not to support her. However, Hobbs retains the support of other influential groups, and she continued to lead her primary rivals in first quarter fundraising. Nevertheless, it remains to be seen how the ordeal will affect her standing with Democratic primary voters.

“For Republican supporters of Donald Trump in Michigan, it seemed like a crowning moment: The state party chose two candidates endorsed by the former president, both outspoken preachers of 2020 election falsehoods, as its contenders for the state’s top law enforcement officer and its chief of election administration,” the New York Times reports.

“But instead, that move at a convention last weekend — where Republicans officially endorsed Matthew DePerno for attorney general and Kristina Karamo for secretary of state — have ruptured the Michigan Republican Party. After months of strain, it appears to finally be snapping as what remains of the old guard protests the party’s direction.”

“But, the far more exciting and consequential question is whether or not Pres. Joe Biden will be on the ballot in 2024. Democratic voters are at best lukewarm at the prospect of a Biden reelection campaign. That sentiment has been picked up in both quantitative and qualitative surveys.”

Former Attorney General William Barr told Newsmax that it would be a “big mistake” for the Republican party to nominate Donald Trump for president in 2024.

“Senate Democrats’ campaign arm is reserving $33 million in advertisements this fall, with the bulk of its resources devoted to protecting the party’s quartet of embattled incumbents in the hopes of keeping their tenuous hold on the majority,” Politico reports.

“House Republicans’ main super PAC is booking $125 million in TV ad reservations in roughly 50 media markets across the country — a massive down payment on the party’s bid to wrest back the majority this fall,” Politico reports.

“Toyota is once again donating thousands of dollars to Congressional candidates who voted to overturn the 2020 election, in spite of the pledge the company made last year to stop doing so,” Vice News reports.

“Running against Washington is nothing new. Running against Washington while your party controls the White House, Senate and House is something significantly more complicated,” CNN reports.  “That is the knotty path Senate Democratic incumbents are attempting to walk as they run for reelection while their party controls most every lever of an unpopular federal government. How these Democrats – Sens. Raphael Warnock of Georgia, Mark Kelly of Arizona, Maggie Hassan of New Hampshire and Catherine Cortez Masto of Nevada – handle dealing with and talking about President Joe Biden and Senate leadership will illustrate how Democrats view their own party’s control of Washington.”