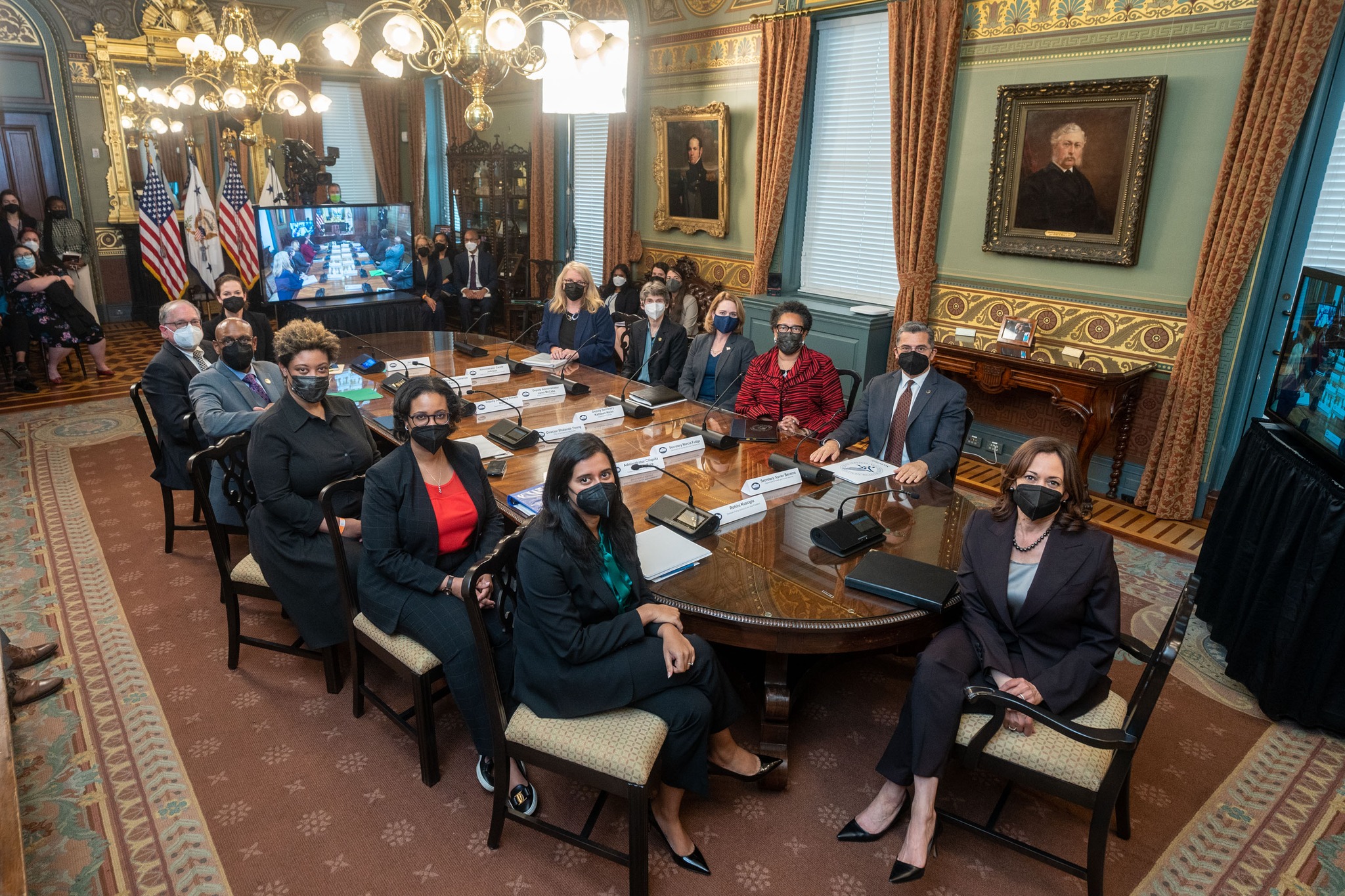 “Biden’s funding request includes $20 billion in military assistance for Ukraine, $8.5 billion in economic assistance and $3 billion in humanitarian aid, among other pots of money, such as $500 million to support production of U.S. crops to address the global food shock caused by the war.”

“As the Biden administration sends billions of dollars in aid to the war-torn country, there is a bipartisan push in Washington to more aggressively target assets of the financial elite linked to the Russian president and sell them, transferring the funds to Kyiv.”

“Gross domestic product unexpectedly declined 1.4% in the first quarter, marking an abrupt reversal for an economy coming off its best performance since 1984,” CNBC reports. “The negative growth rate missed even the subdued Dow Jones estimate of a 1% gain for the quarter.”

“Rising omicron infections to start the year hampered activity across the board, while inflation surging at a level not seen since the early 1980s and the Russia invasion of Ukraine also contributed to the economic stasis.”

Gallup: “Americans’ confidence in the economy remains very low, and mentions of economic issues as the most important problem in the U.S. are at their highest point since 2016.”

“Inflation, which registered as the top economic problem last month and continues to be, was previously at this level in 1984.”

The Verge: “Data compiled by The Verge from social media statistics site Social Blade shows that in the two days since the deal was completed, influential conservative accounts have increased their follower counts at roughly ten times the average daily rate for the month leading up to the acquisition.”

“Meanwhile, popular liberal accounts have suffered, collectively losing hundreds of thousands of followers on April 25th and 26th after a month of gains.”

“The Biden administration arrived in Washington with an ambitious agenda for taming Big Tech, which it portrayed as concentrating too much power in the hands of a few billionaires — the moguls of a new, digital Gilded Age” the Washington Post reports.

“Elon Musk’s $44 billion deal to buy Twitter has put that critique into sharp relief, underscoring how badly Biden’s tech agenda has stalled in the 15 months since taking the White House.”

“The world’s richest person has bought one of its most influential social media platforms — and Washington’s hands are largely tied.”

“But one need not find Musk personally or politically appealing to appreciate that his contributions to humanity could end up being profound.”

“Through his endeavors in solar power and electric cars, Musk might do more to combat climate change than just about any lefty environmental activist or politician you can name. Musk looks even better when judged against other globe-straddling billionaires in his orbit. His is not an empire built on inheritance, dumb luck, monopoly or, subsidies notwithstanding, insider access. Indeed, his businesses seek to undermine some of the most harmful and politically entrenched industries on the planet, among them defense contractors, utilities, oil companies and combustion-engine automakers.”

The special grand jury that’s been hearing evidence in the Manhattan district attorney office’s criminal investigation into the Trump Organization is going to expire at the end of the week and won’t be extended, CNN reports.

Prosecutors’ presentations to the grand jury stopped after Alvin Bragg was sworn in as district attorney this year, and key prosecutors on the case subsequently resigned. Bragg insisted earlier this month that the investigation was still going on even though he had declined to pursue prosecution against Trump in the probe.

Trump was ordered to pay $10,000 in fines every day until he turns over the documents James seeks in her civil investigation into his businesses.

Despite the judge’s ruling on Monday, Habba still insisted that Trump’s legal team had already turned over the requested documents.

The House Jan. 6 Committee is expected to finally hear from ex-Trump lawyer and election steal extraordinaire Rudy Giuliani in May after months of negotiations over the scope of the panel’s subpoena to him, CNN reports.

Said Tillis: “Insider trading by a member of Congress is a serious betrayal of their oath, and Congressman Cawthorn owes North Carolinians an explanation. There needs to be a thorough and bipartisan inquiry into the matter by the House Ethics Committee.”

Politico: “It’s pretty rare for party infighting to be this public — and even rarer for lawmakers to support primary challengers to incumbents across the Capitol. But Cawthorn’s penchant for stoking controversy is starting to wear on many Republicans.”

Tillis declared that “insider trading by a member of Congress is a serious betrayal of their oath,” a principle he curiously kept to himself when North Carolina Sen. Richard Burr (R) had (and continues to have) … similar issues.

A superPAC tied to Tillis has poured more than $300,000 into an anti-Cawthorn ad campaign that, among other things, painted the House Republican as an “attention-seeking embarrassment.”

Tillis’ demand and the Examiner’s article come less than a week after photos of Cawthorn wearing lingerie were leaked to Politico (which reported on said photos with a very weirdly worded headline).

“A federal judge in Louisiana has issued a temporary restraining order against the Biden administration forbidding it from moving ahead with its plan to end Title 42, the controversial pandemic-era border policy,” the Wall Street Journal reports.

“The Biden administration had been on track to end the policy on May 23, a decision that has come under intense criticism from Republicans and some vulnerable Democrats up for re-election this year.”

“A bipartisan group of senators will meet Thursday to discuss options for passing immigration legislation this year,” Bloomberg reports.

“Senators started revisiting long-fraught bipartisan immigration talks this year after Democrats in the chamber failed to take up a House-passed partisan tax and social spending bill that included temporary legal status for some undocumented immigrants and measures to streamline legal immigration processing. The Senate is currently split 50-50 between the parties, meaning at least 10 Republicans must support action to move it through regular order.”

“Thursday’s meeting will mark the most concrete step senators have taken to map out legislative action on immigration this year.”

“President Joe Biden’s latest request for military aid to Ukraine is set to reach Congress as early as Thursday — and promptly get mired in legislative quicksand,l Politico reports.

“Top Republicans are shrugging off Democrats’ efforts to combine the new Ukraine assistance with a bipartisan agreement on Covid relief funding. GOP senators are threatening to force difficult votes on the Biden administration’s divisive decision to end pandemic-era curbs on immigration at the southern border, pressing an issue that Democrats are already lamenting that the White House has mishandled….”

“House Democratic leaders have privately acknowledged to members that more Covid aid would likely need to be attached to another must-pass bill in order to get it through the Senate, though there’s been no specific push to combine them. The House won’t address either issue until at least May 10, when lawmakers return after a week-long recess for Ramadan.”

“With the midterm elections months away, many Democrats are eager to try to kick-start talks before campaign-season politics further complicate the effort—and before they possibly lose their thin control of the Senate and House,” the Wall Street Journal reports.

Said Sen. Chris Van Hollen (D-CT): “I think it’s a make-or-break moment for the elements of Build Back Better that are still on the table. The clock is ticking. This is a perishable moment.”

However, Politico quotes former Democratic aide Jim Manley: “Given how dysfunctional Congress is right now, someone is taking too many edibles if they think they can deal with a slimmed-down Build Back Better in July or August.”

Politico: “With the clock ticking on their hopes of clinching a major climate and deficit reduction deal before Memorial Day, Democratic leaders are again struggling to make progress — stymied by a lack of clear direction or an understanding of what both Sen. Joe Manchin (D-WV) and Sen. Kyrsten Sinema (D-AZ), their two biggest obstacles, are prepared to support.”

“Currently, informal reconciliation talks center on three major areas: climate change, prescription drug reform and deficit reduction. While the White House has yet to acknowledge other social spending elements have been moved off the table, multiple people familiar with the talks said President Joe Biden’s ambitions on child and elder care are all but dead.”

Another nugget from This Will Not Pass, via CNN: Sen. Joe Manchin (D-WV) told Sen. John Thune (R-SD) early last year that he’d switch parties if Thune were the Republican leader instead of Mitch McConnell (R-KY).

“The bill would also limit how long the administration can pause student debt payments and add congressional oversight to the process.”

He added: “Other bribe suggestions: Forgive auto loans? Forgive credit card debt? Forgive mortgages? And put a wealth tax on the super-rich to pay for it all. What could possibly go wrong?”

A reputed federal informant and whistleblower who went missing after he was reported to have turned over a trove of secret files about Deutsche Bank — which provided insight into the bank’s relationship with Donald Trump — was found dead at a Los Angeles school, NBC News reports.

“Richard Olson, a former U.S. ambassador to Pakistan and the United Arab Emirates, has been criminally charged for his alleged role in an undisclosed lobbying campaign for the Qatari government,” Axios reports.

“Fort Worth, Texas, is now the first city government in the United States to mine bitcoin — and in an almost poetic devotion to the initiative, Mayor Mattie Parker oversaw the construction of a small mining farm in City Hall,” CNBC reports.

“North Korean leader Kim Jong Un vowed to accelerate the development of nuclear weapons and threatened to use them if provoked in a speech he delivered at a military parade that featured powerful missiles capable of targeting the country’s rivals,” the AP reports.

“Kim’s remarks suggest he will continue provocative weapons tests in a pressure campaign aimed at wresting concessions from the United States and its allies.”

“Kim Jong-un has warned that he intends to accelerate development of North Korea’s nuclear arsenal and have missiles ready to fire at a moment’s notice,” the Times of London reports.

“Well, there is a question of whether it’s ever appropriate to engage in an exercise in gaudy, celebrity-drenched self-adulation, but that’s a separate question.”  — David Axelrod, quoted by the New York Times, on whether it’s safe for President Biden to attend the White House Correspondents’ Association dinner, given the Covid risks.

Former President Donald Trump said that he would still be in the White House if Senate Minority Leader Mitch McConnell (R-KY) had bought into his false election claims, Punchbowl News reports.

Said Trump: “Had Mitch stuck with many members of the party who knew the election was rigged, I think we wouldn’t be at Mar-a-Lago We would be at the White House having this conversation.”

Oklahoma Gov. Kevin Stitt (R) “will get to decide on a Texas-style anti-abortion bill that would take effect immediately upon his signature,” the Oklahoman reports.

“The bill would effectively implement a near-total abortion ban by allowing private citizens to sue anyone who ‘aids or abets’ a woman seeking an abortion. Successful plaintiffs could be awarded at least $10,000.”

Tennessee state Rep. Jerry Sexton (R) suggested burning books that are deemed “inappropriate” by a bill just passed by the legislature.  The bill now heads to Tennessee Gov. Bill Lee (R) to be signed into law.

New York Times: “The near-instant collapse of CNN+ amounted to one of the most spectacular media failures in years, a $300 million experiment that ended abruptly with layoffs in the offing and careers in disarray. The corporate tug of war over its fate exposed deep philosophical divides about the future of digital media, as executives struggle to navigate a rapidly changing marketplace where technology and consumer habits shift day to day.”