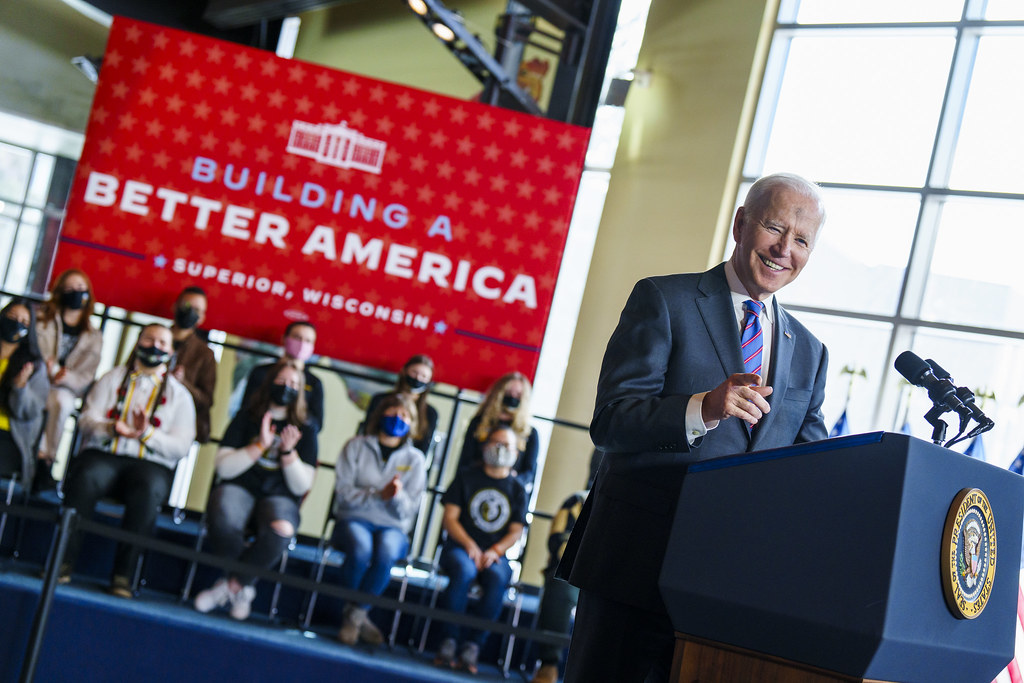 “President Joe Biden has issued his first endorsement of the 2022 campaign cycle and backed incumbent Rep. Kurt Schrader (D-OR), who is facing a progressive primary challenger supported by some high-profile liberal figures and groups,” CNN reports.

Rick Klein: “White House officials had previously said the president would most likely not endorse in Democratic primaries. Oregon’s May 17 primary hasn’t been top of mind for most strategists, and Schrader is a little-known figure in national politics.”

Washington Post: “Biden is beginning to put the pieces together for an aggressive campaign to help limit Democratic losses in November. But it’s an effort some in the party say is long overdue, and despite Biden’s ramped-up efforts, there is no finalized, comprehensive strategy for the midterms inside the White House.”

“There’s no overarching document that outlines the president’s involvement in key races, nor a set message that will carry the party through November, according to multiple people familiar with the situation who spoke on the condition of anonymity to talk candidly.”

White House chief of staff Ron Klain apparently thought it a good sign that Emmanuel Macron won re-election in France by double-digits even though his approval rating is only 36%.

Of course, the biggest difference is that the U.S. has the Electoral College.

The Atlantic: “On paper, Republicans have a prime opportunity to recapture the Senate majority this fall. They need to pick up just a single seat to break the current 50–50 tie, and the political environment is tilting heavily in their favor. President Joe Biden’s approval rating is mired in the low 40s, inflation is rampant, and the Democratic majority rests on a trio of vulnerable incumbents in states—Arizona, Georgia, and Nevada—that the president carried by fewer than 60,000 votes combined in 2020.”

“Yet the GOP may be stuck with candidates whose pockmarked, and in a few cases, scandal-filled, résumés could render them unelectable—or at least they would have in an earlier era.”

As Sen. Mitch McConnell (R-KY) recently mused: “How could you screw this up? It’s actually possible. And we’ve had some experience with that in the past.”

“Michigan Republicans endorsed Kristina Karamo, a first-time candidate who has spread lies about the 2020 election, to run all the state’s elections as the party’s candidate for Secretary of State,” BuzzFeed News reports.

“Karamo is one of at least 17 election deniers running this year to take over elections in 14 states, three of whom have the explicit backing of former president Donald Trump.”

Amanda Carpenter: “If this is the last time you ever hear the names Matt DePerno and Kristina Karamo, you’ll be lucky. They are the conspiracy-driven Trump-picked candidates for Michigan attorney general and secretary of state that the state GOP endorsed as candidates in its convention on Saturday.”

“Reasonable people would have to hope DePerno and Karamo get blown out in the general election and are never heard from again. Their outlandish insistence that the 2020 election was stolen from Trump has led to considerable fractures within the Michigan Republican Party. As such, they’re viewed as longshots who will be unable to unite the party, win over independents, and beat the incumbent Democrats, Attorney General Dana Nessel and Secretary of State Jocelyn Benson.”

“That said, DePerno and Karamo were never really considered serious candidates, yet they managed to clinch their races, thanks to Trump’s backing. And in a midterm year in which Democrats are struggling nationally, it would be unwise to write off any of these races.”

Atlanta Journal Constitution: “The first 23 minutes of the debate revolved around Perdue’s efforts to blame Kemp for Donald Trump’s loss in 2020 and the senator’s defeat in 2021.”

“Time and again, Perdue brought up the same false allegations that Donald Trump has pushed for more than a year about the ‘consent decree,’ ‘special session’ and GBI investigations – needling Kemp to the point where the two devolved into a shouting match.”

“Many of Perdue’s allegations were flat-out false.”

“Utah Democrats have taken the unusual step of endorsing independent candidate Evan McMullin in his race against Sen. Mike Lee (R-UT), who has faced questions about his furious efforts to overturn the 2020 election to keep former president Donald Trump in power,” the Washington Post reports.

In every midterm election cycle, there are dozens are articles about how critical the youth vote is for Democrats.

A new Harvard Institute of Politics poll shows that young voters aged 18 to 29 say they’ll vote in roughly the same proportions as they did in 2018 — 36% today compared to 37% four years ago.

But as expected, there’s a big difference between the two political parties with young registered Republicans significantly more likely to vote this year, 43% vs. 36%. In contrast, participation of young Democrats is expected to fall from 51% to 46%.

And there’s a huge warning sign for Democrats in their inability to mobilize Black voters: Just 33% of young Black voters say they expect to vote this year, as compared with 46% in 2018.

Erin Maye Quade (D), who went into labor the morning of the Minnesota Democratic party’s convention Saturday, “had to pause her speech as she went into a contraction, but ultimately pushed through to finish it,” KMSP reports.

“The moment, filmed by people in the crowd, has inspired some observers who see it as an example of the strength women need to overcome the unique challenges they face in their careers, but many also saw it as another example of the unfairness of system and society that does not accommodate them.”

Quade “withdrew from the nominating process after her opponent, Justin Emmerich, won the first round, 91-74. As Maye Quade then rushed to the hospital, Emmerich went on to win the final round unopposed, securing the party’s endorsement for the Aug. 9 primary.”

It’s absolutely stunning the party did not postpone the nominating vote.

ARIZONA U.S. SENATOR. The NRSC is commencing what they call a “seven figure” ad buy that starts off with a spot attacking Democratic Sen. Mark Kelly over immigration. This appears to be the first ad of the cycle going directly after a candidate from any of the “big four” party groups (which in addition to the NRSC includes the Senate Leadership Fund super PAC on the GOP side and the DSCC and Senate Majority PAC for Democrats).

“Hawley — who is widely regarded as a prospective 2024 presidential contender — has now thrown his support to two of the most outspoken Republican populists running for Senate this year: Masters and Ohio Republican J.D. Vance. In both cases, Hawley is inserting himself into competitive primaries and backing candidates with notably anti-political establishment rhetoric and ideology.”

Kellyanne Conway said that she heard last year about “some kind of sexual allegations” against Nebraska gubernatorial candidate Charles Herbster (R) — but she’s working to get him elected anyway, the HuffPost reports.

“A state court in Kansas on Monday threw out a newly drawn map of congressional districts as an unconstitutional gerrymander, the latest in a series of similar rulings across the country,” the New York Times reports.

MyPillow CEO Mike Lindell is bankrolling what he calls a nationwide series of lawsuits to stop the use of voting machines in local and national elections, Insider reports.

Rep. Ronny Jackson (R-TX) “tapped his campaign account for more than $2,300 in costs associated with membership at a private social club in Texas,” Roll Call reports.  “It is illegal to spend campaign funds for personal purposes. The Federal Election Campaign Act prohibits spending on ‘country club memberships’ along with ‘dues and fees for health clubs or recreational facilities.’”

“Mehmet Oz and David McCormick have been all over Pennsylvania television, but rarely on the same stage together,” the Philadelphia Inquirer reports.  “That changes Monday night, when the top Republican candidates for U.S. Senate debate, a face-off airing on TV stations statewide and streaming online.”

“A local Republican Party leader in North Carolina threatened to get a county elections director fired or have her pay cut unless she helped him gain illegal access to voting equipment,” Reuters reports.  “The party official, William Keith Senter, sought evidence to support false conspiracy theories alleging the 2020 election was rigged against former U.S. President Donald Trump. The previously unreported incident is part of a national effort by Trump supporters to audit voting systems to bolster the baseless stolen-election claims.”

“Randy Bishop, a right-wing Michigan radio host who filed last week to run for the state Senate, said on his show last month that TV commercials were attempting to make him feel guilty because he thinks families should be all White,” the Detroit News reports.

Said Bishop: “Can’t even watch a college basketball tournament without commercials telling me I have to feel guilty because I think a family should be a White mom, a White dad and White kids. They want us to die and go away. And they’re going to try to do it through politics this year. Well, we have got to be just as smart.”