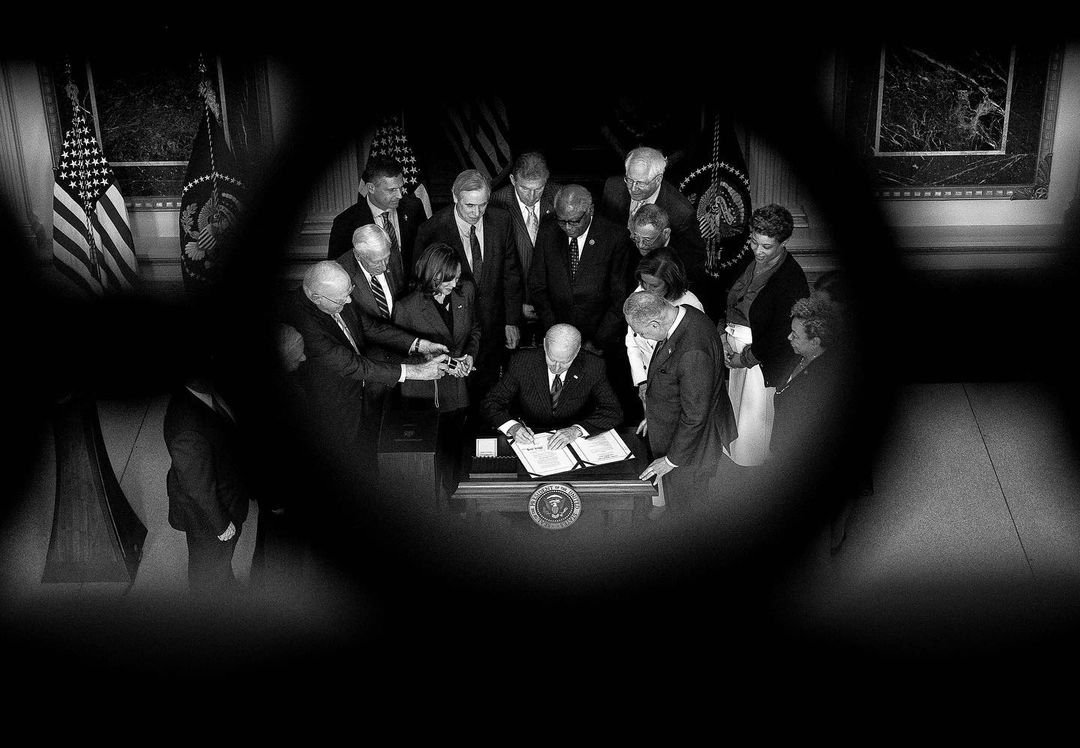 “This ain’t your father’s Republican Party… These guys are a different breed of cat. They’re not like what I served with for so many years.”  — President Biden, quoted by MSNBC.

“President Biden and Vice President Harris are ramping up their in-person fundraising at a critical point less than seven months out from the midterm elections,” The Hill reports.

“Pollsters and prognosticators are forecasting increasingly dire results for their party in the November midterm elections. Inflation, the No. 1 issue on the minds of voters, is accelerating. And despite a booming job market, the president’s average approval rating hasn’t budged since January, when it settled into the low 40s.”

“A New York appeals court ruled on Thursday that new congressional districts drawn by Democrats violated the state’s ban on partisan gerrymandering, partially upholding a lower-court ruling that would block the state from using the lines in this year’s critical midterm elections,” the New York Times reports.

“Former President Donald Trump’s late endorsements in hypercompetitive Republican Senate primaries in Ohio and Pennsylvania have unlocked a flood of support for his chosen candidates, including millions in cash,” the AP reports.

“But the endorsements have also provoked backlash from some Republicans who believe Trump has betrayed his core supporters by backing Hillbilly Elegy author JD Vance in Ohio and TV’s Dr. Mehmet Oz in Pennsylvania. Both candidates have been criticized for time spent outside their states and being insufficiently committed to the former president and his ‘America First’ agenda.”

“The blowback has included calls by a major conservative group aligned with a Vance rival to boycott the rally Trump is holding Saturday night to try to boost his candidate. The state’s tea party movement, which overwhelmingly supports Trump, is also planning a protest outside.”

“When Bernie Sanders’ aides sent out a memo this week revealing that the Vermont senator hadn’t closed the door to a third bid for president, they blasted it far and wide,” Politico reports.

“That was precisely the point: While Sanders has no current plans to run in 2024, no one should forget that he remains popular, is the undisputed leader of the progressive left and that he must be part of any conversation about a potential open Democratic presidential primary. Until now, he wasn’t.”

“A person close to the process said Sanders approved the concept and execution of the memo.”

“Former President Donald Trump’s persistent flirtation with another White House run is doing little to discourage other potential Republican candidates from stepping up their activity in Iowa, the state that will formally launch the 2024 nomination process,” the AP reports.

“The Democratic Party is considering banning its army of consultants from engaging in anti-union activity following a report that one of its pollsters had helped Amazon combat organizing efforts,” Politico reports.

“A union-drafted addendum to any contract between a Democratic Party political committee and a consultant would forbid the consultant — or any of its parents, subsidiaries or affiliates — from participating in an array of activities involving unions. That includes union-busting, aiding an employer in a labor dispute or lobbying against union-backed legislation.”

Elizabeth Warren: “Democrats win elections when we show we understand the painful economic realities facing American families and convince voters we will deliver meaningful change. To put it bluntly: if we fail to use the months remaining before the elections to deliver on more of our agenda, Democrats are headed toward big losses in the midterms.”

LA-Gov: Republican state Sen. Sharon Hewitt has confirmed her interest in potentially running for governor next year, though she says a decision is likely months away.

RI-Gov: Businesswoman Ashley Kalus is spending $109,000 to launch a minute-long ad that introduces herself to voters ahead of the Republican primary in September. The spot focuses on inflation, and Kalus speaks to the camera while rattling off a list of priorities such as making Rhode Island more affordable, protecting parental involvement in education, and fighting drug addiction and crime.

MD-04: Democratic Rep. Anthony Brown is leaving this safely blue seat, which is based around Prince George’s County in the D.C. suburbs, to run for attorney general, and three notable candidates from the county are competing to succeed him.

One well-established contender is Brown’s predecessor, former Rep. Donna Edwards, a progressive who left the House in 2016 to unsuccessfully run for the Senate; Edwards later waged a 2018 comeback campaign for county executive, but she lost that primary by a wide 62-24 margin to Angela Alsobrooks. Another familiar name is former county State’s Attorney Glenn Ivey, whom Brown beat 42-34 in the 2016 primary to replace Edwards. Another person to watch is former Del. Angela Angel, who lost her 2018 primary for a state Senate seat 55-37.

“I don’t mean to nitpick, but I wouldn’t categorize myself as progressive… I consider myself a Democrat that’s running on the same platform of ideas that every other Democrat in this race is running on. And I can’t think of a Democrat running nationally that’s running on anything functionally different in that regard.”  — Pennsylvania Lt. Gov. John Fetterman (D), on CNN.

MD-06: Democratic Rep. David Trone faces a potentially tough general election now that redistricting has cut Joe Biden’s margin of victory from 61-38 to 54-44 (Hillary Clinton would have carried this version of the 6th just 47-46), though the extremely wealthy incumbent has proven in the past that he’s more than willing to make generous use of his own wealth. Indeed, Trone self-funded $2 million during the first quarter, which was far more than the $41,000 he took in from donors, and ended March with just over $2 million on hand.

The most prominent Republican in the contest for this redrawn constituency, which includes western Maryland and the D.C. exurbs, is Del. Neil Parrott, whom Trone turned back 59-39 last cycle. Parrott raised just $25,000 during the first three months of 2022 and had $262,000 in the bank, though contributors may take more of an interest in this race now that the 6th has become more competitive. State House Minority Leader Jason Buckel briefly considered running here as well before filing closed, but he decided to seek re-election instead.

Pew Research: “Republicans are critical of how several major institutions, from large corporations and technology companies to universities and K-12 public schools, are affecting the United States. And in many cases, Republicans’ assessments have taken a sharp negative turn in the past few years.”

“Democrats, by contrast, are more positive than Republicans about the impact of a number of institutions and industries.”