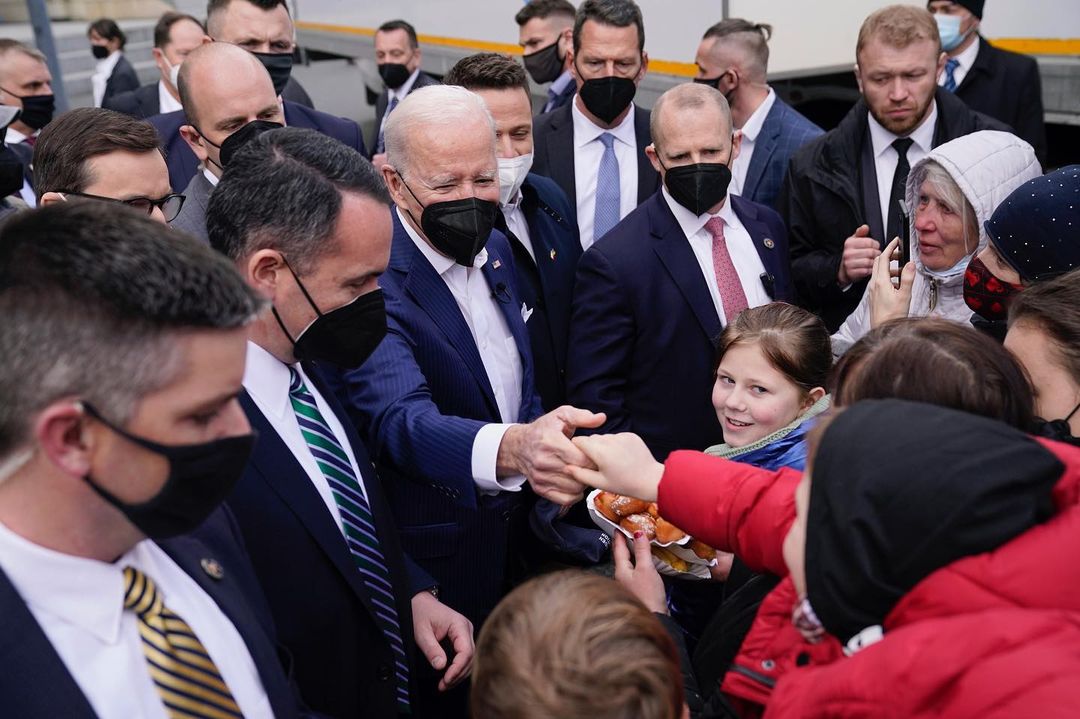 A new Gallup poll finds 41% of Americans report worrying a great deal about the issue of illegal immigration, with another 19% worried a fair amount.

Perry Bacon Jr.: “Trump’s bad polling didn’t come as much of a surprise, given the way he embraced unpopular policies (repealing Obamacare; a tax cut largely benefiting the wealthy; separating children from their families at the border) and interjected himself into divisive issues, such as his attacks on NFL players who knelt during the national anthem. Trump acted as though he was president of only Red America. In contrast, Biden has pushed popular policies, said little as state-level Republicans pass extreme legislation, such as total bans on abortion, and tried hard to be a unifying figure.”

“I’m focusing on approval ratings for two reasons. First, because they are one of the few tangible pieces of data that we have across presidencies. Second, because they matter. When presidents become more unpopular, the media covers them more negatively, and other politicians, particularly politicians from their own party, feel freer to criticize them — which tends to make them even more unpopular. Presidential unpopularity creates a self-reinforcing cycle.”

“But while it’s clear Bidenism is failing, it’s not clear exactly why.”

“A federal judge cleared the way on Monday for a group of Georgia voters to move forward with legal efforts seeking to disqualify Rep. Marjorie Taylor Greene from running for re-election to Congress, citing her role in the Jan. 6, 2021, attack on the Capitol,” the New York Times reports.

“The disqualification effort is based on a constitutional provision adopted after the Civil War that barred members of the Confederacy from holding office.”

“It mirrors several other cases involving Republican members of Congress, whose roles leading up to and during the deadly riot have drawn intense criticism.”

“Emmanuel Macron has consolidated his lead over Marine Le Pen as France’s presidential election enters its final week, according to polls, suggesting harsher scrutiny of the far-right challenger’s plans may be shifting the race’s dynamic,” The Guardian reports.

“Six days from the runoff that will decide who occupies the Élysée Palace for the next five years, all 16 polls carried out since the first-round vote on April 10 have put the incumbent ahead, by between seven and 12 percentage points.”

FiveThirtyEight: “Trump may not be slowing down in his endorsements, but we have observed a change in strategy. Back in December, we noted that almost half of the endorsements Trump had made to that point carried political risk: 43 percent (20 out of 46) of his Senate, House and governor endorsements4 were of non-incumbents in contested Republican primaries, meaning they weren’t necessarily locks to win. But since then, only 23 percent (13 out of 57) of Trump’s Senate, House and governor endorsements have been of non-incumbents in contested Republican primaries.”

“In other words, Trump has been loading up on ‘safe’ endorsements, like on April 6 when he endorsed seven incumbent Republican representatives, none of whom are especially likely to lose their primaries.”

Saying in a leaked recording that “we all want the ultimate goal of him never serving again,” Lisa Wiggins, a former caseworker and campaign aide to Rep. Madison Cawthorn (R-NC) has filed an employment-related campaign against the embattled congressman, the Smoky Mountain News reports.

Said Wiggins: “What he’s done to me was illegal, morally wrong, you name it, it’s been done.”

She added: “I mean, he’s just a bad person. He’s a habitual liar and he’s going to say and do anything he can to your face but behind your back he’s completely opposite. There’s some good stories I have – a lot of good stories.”

“Run for Something, a Democratic group, is launching a plan to recruit more than 5,000 candidates for local offices in charge of election administration, as former President Trump continues to spread election conspiracy theories,” Axios reports.

“The group hopes to raise $80 million over the next three years and recruit candidates in 35 states — where election administrators are elected by voters — who will run to become county election board members, county clerks and other election-related positions.”

Jonathan Bernstein: “It’s sort of a miracle that televised general-election debates ever happened at all in the U.S. If the Republican National Committee gets its way, they may never happen again. Their apparent demise tells us a few important things about the Republican Party, but before getting to that it’s worth thinking about the institution itself.”

“To begin with, debates just never should’ve happened. Most campaign professionals don’t like to subject their candidates to high-profile unscripted events, and general-election debates are extremely high profile. That goes double for a campaign that thinks its candidate is winning. Why risk the possibility that something could go wrong? Moreover, the conventional wisdom has always been that by participating in one-on-one debates, incumbents elevate their opponent. Presidents always seem ‘presidential’ and challengers rarely do — but supposedly that gap is narrowed by watching them debate as formal equals. More basically: Given that both candidates have to agree to participate, a debate requires both campaigns to think they’ll benefit, which can’t be true.”

Rep. Adam Kinzinger (R-IL) told HuffPost that he “would love” to run against Donald Trump in 2024.

Said Kinzinger: “I’ll make a decision when we get there, if there’s a need and a desire. It’s truly not anything I’m planning right now, but I’m not going to rule it out. Look, if we’re in a position, if it’s just terrible candidates and the country’s in a worse place? Maybe. But there’s no grand plan right now.”

He added: “I would love it. I really would. Even if he crushed me, like in a primary, to be able to stand up and call out the garbage is just a necessary thing, regardless of who it is… I think it’d be fun.”

“Donald Trump travels to Nebraska next week for a campaign rally featuring a supportive gubernatorial candidate who has been accused of groping by eight women,” USA Today reports.

Washington Post: “Eight women accused Charles Herbster (R) of touching them inappropriately, according to a report published last week by the Nebraska Examiner. Although seven of the women spoke on the condition of anonymity, the state senator, Julie Slama, went on the record and said Herbster reached up her skirt and touched her inappropriately during an event in 2019.”

Meanwhile, three witnesses of Herbster’s groping have now gone on the record with the Nebraska Examiner.

Five more Democratic Senate candidates told Politico they disagree “with the way the Biden administration is phasing out Title 42, the latest sign that Biden’s policy position is a big loser among purple-state Democrats facing tough elections.”

“And an increasing number of Democrats say the whole thing needs to be paused.”

OHIO 11TH CD. Democratic Majority for Israel PAC, which is backing Rep. Shontel Brown ahead of her rematch with former state Sen. Nina Turner in the May 3 Democratic primary, is running a new ad that praises Brown for standing with Joe Biden and voting for his infrastructure spending law last year.

FUNDRAISING. The deadline for federal candidates to submit their first quarter fundraising totals was April 15, so we will start to get a lot of new numbers this week.

The Mitch McConnell-aligned Senate Leadership Fund, which is the main super PAC on the Republican side in Senate races, has reserved a whopping $141 million in TV ads from Sept. 6 through Election Day across seven states:

Republicans currently hold Alaska, North Carolina, Pennsylvania, and Wisconsin, while Democrats are defending Arizona, Georgia, and Nevada. Reporting earlier this month indicated that Senate Majority PAC, which is SLF’s counterpart on the Democratic side, had reserved $108 million across six of these same states with the exception of Alaska.

Notably absent from either party’s reservations was Democratic-held New Hampshire, which is the only remaining state up this fall where Joe Biden won by just single digits.

FLORIDA 4TH and 5TH CD. Republican Rep. John Rutherford is a member of the House Ethics Committee—and now he’s being investigated by that very same body. A Thursday press release from the committee didn’t offer any details as to the nature of the probe, but Politico took note of an Insider story from last month reporting that Rutherford had bought as much as $15,000 worth of stock in military contractor Raytheon on the very day that Russia invaded Ukraine. Last year, Insider also reported that Rutherford failed to disclose five other stock trades he made in 2020 valued at up to $75,000.

Rutherford doesn’t appear to have addressed the Ethics Committee’s announcement yet, though a spokesperson previously acknowledged the congressman hadn’t filed disclosure reports in a timely manner for the 2020 transactions flagged by Insider. The development comes as Florida lawmakers prepare to adopt a new congressional map proposed by Republican Gov. Ron DeSantis that would make major changes to the Jacksonville area, which Rutherford represents. Because of those alterations, it’s not clear whether Rutherford would run in the revised 4th District or the radically altered 5th; he currently holds the 4th but it would become considerably bluer while the new 5th would be much redder.

Several other notable Republicans are also reportedly eyeing this same pair of districts, though it’s likely they’ll wait to see which seat Rutherford chooses. The most prominent name belongs to Jacksonville Mayor Lenny Curry, who was elected to a second four-year term in 2019 but can’t run again due to term limits, though he declined to answer questions about his plans. State Sen. Aaron Bean, state Rep. Jason Fischer, and Jacksonville City Councilman Rory Diamond were more forthcoming, each telling the Florida Times-Union they’re potentially interested.

RHODE ISLAND 2ND CD. State Sen. Jessica de la Cruz has announced she’s dropping out of the Republican primary and will instead seek re-election, throwing her support behind Cranston Mayor Allan Fung. De la Cruz struggled with fundraising, and her departure leaves Fung, who was the GOP’s 2014 and 2018 gubernatorial nominee, facing just 2020 nominee Bob Lancia in the September primary for this open Democratic-held seat.

TEXAS 28TH CD. Despite being pressed repeatedly by NBC’s Chuck Todd in a Thursday interview, Democratic Rep. Henry Cuellar declined to reiterate his attorney’s recent claim that he’s not the target of a federal investigation that prompted law enforcement to raid his home and campaign headquarters earlier this year. Todd asked Cuellar, “What assurance did you get that you’re not a target?” to which the congressman replied, “I’ll let my attorney speak to that.”

GEORGIA SECRETARY OF STATE. Landmark Communications also polled next month’s Republican primary for secretary of state, where they find Rep. Jody Hice with a 35-18 lead over incumbent Brad Raffensperger while former Alpharetta Mayor David Belle Isle takes 10. That’s somewhat worse for Raffensperger than a recent University of Georgia poll that found him trailing by a smaller 30-22, and neither result is encouraging news for the incumbent in a race where Trump is backing Hice over Raffensperger’s refusal to help steal the 2020 election for him.