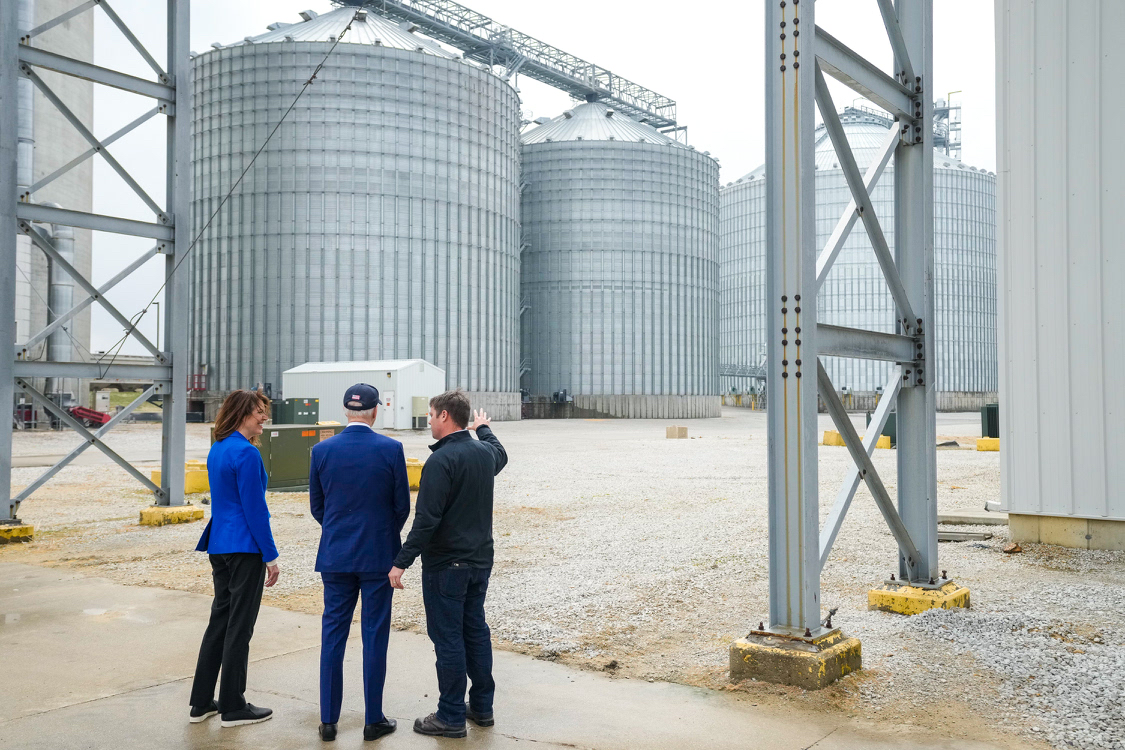 A new Franklin & Marshall College Poll in Pennsylvania finds John Fetterman (D) has pulled ahead as the Democratic U.S. Senate frontrunner over Rep. Conor Lamb (D), 41% to 17%, while 26% are still undecided.

Said pollster Berwood Yost: “If you are a candidate, you want to be in Fetterman’s position. He seemed to solidify his advantage. It doesn’t seem like Lamb is making any inroads in his name recognition.” The Republican U.S. Senate primary, meanwhile, is still anyone’s race, with 43% of voters still undecided on which candidate they’ll support.

“Let’s start with the premier contests. Gov. Brian Kemp led former U.S. Sen. David Perdue, his Trump-backed challenger, 48% to 37%, among the group of voters not informed of the former president’s pick. Perdue’s numbers only ticked up slightly – to 39% – with the group that knew about Trump’s backing.”

“Former football standout Herschel Walker tallied 64% of the vote among voters not told which candidate Trump endorsed compared with 76% in the group that was informed.”

However, Trump’s backing did bring a dramatic boost to down-ticket candidates.

A new Landmark Communications survey in Georgia finds Gov. Brian Kemp (R) leading the Republican gubernatorial primary with 52%, followed by David Perdue at 28%, and Kandiss Taylor at 10%.  Said pollster Mark Rountree: “Sen. Perdue’s job here is not necessarily winning a majority on election day, his job is to throw it to a runoff, and then it becomes a lot harder for an incumbent to win.”

However, an endorsement by Donald Trump would make 55% of Republican voters either “more likely” or “much more likely” to vote for that candidate.

1Q FUNDRAISING. The deadline for federal candidates to submit their fourth quarter fundraising totals is April 15.

“Sen. Kyrsten Sinema (D-AZ) raised $1.6 million during the first quarter of 2022, and nearly 75% of her contributions totaled less than $100,” Axios reports.  “It’s a lot of money for a senator who isn’t up for re-election until 2024, and isn’t a member of leadership or a committee chair.”

Orlando Sentinel: “DeSantis has topped $100 million raised for the 2022 election, dwarfing the money raised by his three potential Democratic foes in Florida.”

“DeSantis has drawn from former President Donald Trump’s megadonor network, while also racking up smaller donations from people across the United States. The bulk of the money raised for DeSantis’ reelection effort has come through his Friends of Ron DeSantis political committee, which can accept unlimited contributions.”

Said Luntz: “They won’t say it in public, but behind his back they think he’s a child. They’re laughing at him.”

He added: “Trump isn’t the same man he was a year ago. Even many Republicans are tired of going back and rehashing the 2020 election. Everybody else has moved on, and in Washington everyone believes he lost the election.”

Jonathan Bernstein: “Yes, he certainly seems to want to be president again. But the idea that he’s invincible among Republicans is far from proven. His 2016 nomination was a narrow one, aided by all sorts of odd events — including a fair amount of luck. He also has an electoral record now, and it’s not exactly an impressive one; after all, he lost re-election, and Republicans lost the House (in 2018) and the Senate (in 2020) while he was in office. His tantrum over losing the presidency and his false claims about fraud have widely been credited for the loss of two Senate seats in Georgia. Republicans may trust Trump more on policy than they once did, but they should have even less confidence that he’ll be a team player now. That could mean more opposition from party actors than last time.”

“That leaves the question of whether voters would listen if party actors tried to oppose Trump. They certainly didn’t in 2016. Would it be different this time? It might depend on which party actors; if Fox News hosts and talk radio turned against Trump (or, perhaps, just strongly supported some other candidate) I could imagine it mattering.”

“And that’s without getting into the possibility that Trump’s various legal entanglements catch up to him. Or that he’s less interested in being president again than he is in extracting money from Republican donors, a process that might be disrupted if he formally declared a run for office.”

“The map would create 20 Republican-performing districts and eight Democrat-leaning districts and is expected to be quickly approved by the Republican-controlled Legislature next week when it meets in a special session called by the governor. The current split of the Florida congressional delegation is 16 Republicans and 11 Democrats, and the state gets an additional district because of its population growth.”

“In the face of stiff national headwinds that threaten one of the narrowest majorities in recent history, House Democrats say they will showcase the local results they have delivered since seizing control of Congress and the White House just over a year ago,” The Hill reports.

“It’s the worst political environment that I’ve lived through in 30 years of being a political consultant.” — Democratic pollster John Azalone, in a conversation with Politico.

“Democrats say they’ve done a lousy job at highlighting their accomplishments in a year plus of unified power in Washington, and are blaming this on the possibility they will suffer major losses in November’s midterm elections,” The Hill reports.

Said one Democratic strategist: “Look, I’m not going to BS. We’ve done a fucking horrible job and sometimes I think we deserve to lose big in November. Democrats can say whatever they want but it’s not honest.”

He added: “The narrative here doesn’t exist. We need to wake up fast.”

Alan Abramowitz: “Democrats are very likely to lose their majority in the House of Representatives in the 2022 midterm election and could lose their majority in the Senate, although that is less certain. In neither chamber, however, are they likely to experience a shellacking of the sort that both parties have experienced in some postwar midterm elections.”

Senate Minority Leader Mitch McConnell (R-KY) said the political atmosphere is good for Republicans heading into the midterms but warned that the party could bungle its chances if “unacceptable” candidates win their primaries but go on to lose in November, The Hill reports.

Said McConnell: “From an atmospheric point of view, it’s a perfect storm of problems for the Democrats. How could you screw this up? It’s actually possible. And we’ve had some experience with that in the past.”

He added: “In the Senate, if you look at where we have to compete in order to get into a majority, there are places that are competitive in the general election. So you can’t nominate somebody who’s just sort of unacceptable to a broader group of people and win. We had that experience in 2010 and 2012”

“Democrats know just how bad an environment they face heading into November’s midterm elections but hold out hope from an unlikely quarter: former President Trump,” The Hill reports. “Democrats believe Trump’s backing of flawed candidates in Republican primaries could saddle the GOP with losers in the general election.”

“They also hope Trump will retain his power as a powerful motivator of Democratic voters even when he isn’t on the ballot.”

Jonathan Bernstein: “Let’s get the obvious objections out of the way. I thoroughly agree… that mandatory voting is constitutional.”

“And, no, universal voting isn’t just a partisan plot to benefit Democrats. Or Republicans. Or anyone else. Political scientists have repeatedly found minimal differences between voters and non-voters. Moreover, one of the few really positive developments over the last 20 years or so is that after a brief period in which virtually all the groups most likely to vote tended towards Republican and all those least likely to vote tended toward Democrat, things have returned to normal.”

“The best argument for universal voting has always been that it encourages participation in democracy, thereby generating additional buy-in among the broadest possible group of citizens to the whole idea of a democratic polity.”

“Voters for candidates defeated in round one now have to decide between either voting for one of Macron or Le Pen, or not voting at all. Our data on current transfers suggests that Macron is picking up around one in nine (11%) of those Zemmour voters currently giving us a vote intention, 55% of Mélenchon voters, and the vast majority of supporters from other left wing and centrist candidates in that round.”

“On the other hand, Le Pen is attracting support from 90% of Zemmour voters, 45% of those who backed Mélenchon on Sunday, and a clear majority of voters from other right wing candidates who bowed out last Sunday.”

“Just days after a verified account for Fox News appeared on former President Trump’s social media app, Truth Social, a Fox News spokesperson says the network has nothing to do with the account,” Axios reports.  “Investors clearly would have viewed Fox News’ participation as a boon for the struggling app.”

Glenn Youngkin’s (R) victory in last year’s Virginia gubernatorial race was largely attributed to parents angry about school closures, masking requirements and other restrictive measures intended to slow the spread of illness during the pandemic.

But Republicans have drawn something much deeper from that victory and now see that talk of race and sex in schools also deeply divides Americans.

Politico: “The signs of the Democratic Party’s evolution on crime are everywhere — and go beyond defeats suffered by the ‘defund the police’ movement in Minneapolis and elsewhere last year. As the midterm elections pick up, Democrats are calling for more police funding and attempting to co-opt traditionally Republican talking points on crime…”

“The adoption of firmer postures on law and order come after a spike in murders nationally in recent years, including in some of the nation’s largest, most heavily Democratic cities. The change of tone also comes in anticipation of attacks from Republicans about “defund the police” in this year’s midterm elections.”

Rolling Stone: “Republican candidates are turning to guns, guns, guns in a very big way ahead of the midterms, serving their potential constituents with a torrent of campaign ads, Instagram posts, and even Christmas cards of themselves toting and firing deadly weapons.”

“Conservatives using guns in campaign ads is nothing new, of course, but the way in which they’re being used in the wake of Trump’s term in office — and particularly in the wake the violent attack on the Capitol that ended it — portends a dark future for the party, and if it regains control of Washington, D.C., for the nation.”