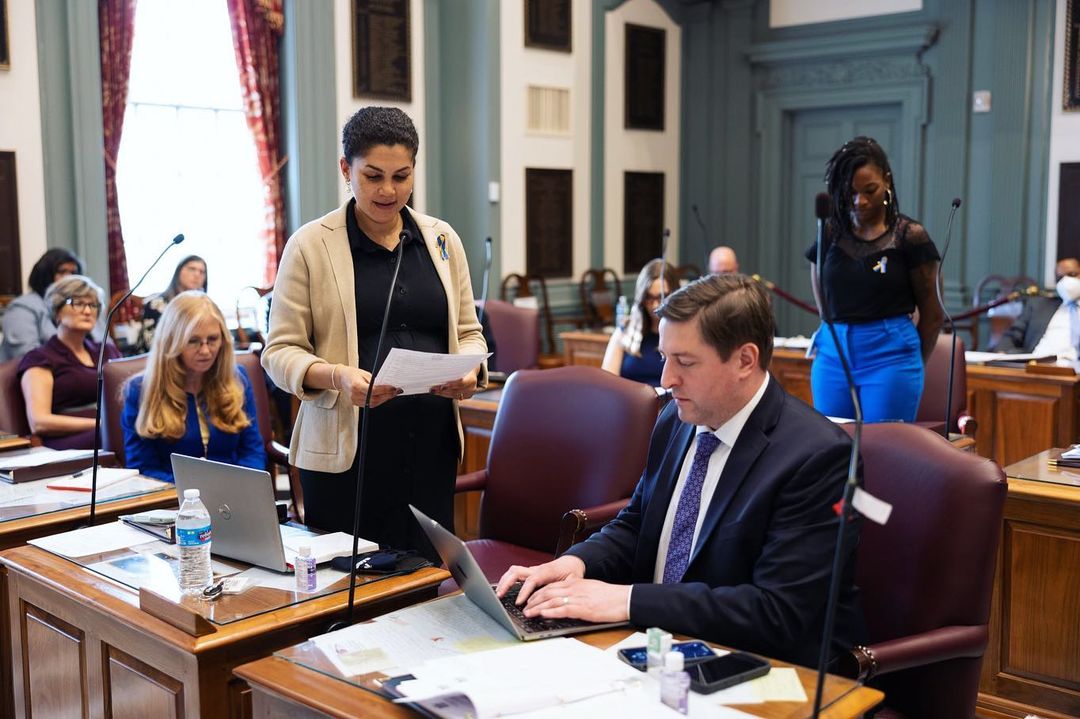 Sixth up, Good Government and Transparency.

Senate Bill 246, sponsored by Senator Mantzavinos, amends earlier-enacted provisions in the Delaware Insurance Code and Administrative Procedures Act related to public inspection of State agency documents to incorporate by reference the requirements of the later-enacted FOIA statute. This will improve FOIA acessibility to insurance department documents.

This bill has already passed the House and Senate, unanimously.

House Bill 351 will require candidates to obtain a criminal history background check of themselves. I had to do this when I applied to take the bar exam. It’s not hard.

This bill will ensure that a candidate for state office has not been convicted of or pled guilty to any crime that, per the Delaware state constitution, disqualifies them from holding said office.

The results of the background check are provided to the Commissioner of the Department of Elections who has the duty to review the results and ensure that individuals are qualified under § 21, Article II of the Delaware Constitution before the individual may be considered a candidate for election to either House of the General Assembly.

What does Section 21 of Article II say? No person who shall be convicted of embezzlement of the public money, bribery, perjury or other infamous crime, shall be eligible to a seat in either House of the General Assembly, or capable of holding any office of trust, honor or profit under this State.

As a lawyer, I must ask what does “other infamous crime” mean? I assume all capital offenses like any murder. Rape? Sexual Assault? Assault?

The Act makes any and all information revealed by the background check obtained by the Commissioner of Elections confidential and not a public record. The cost of the criminal history background check is the responsibility of the candidate and may be paid from campaign funds.

I have a question. This bill says the Commissioner shall review and keep private the results. But what happens if a disqualifying conviction is found? Is the Commissioner empowered to immediately disqualify the candidate? And wouldn’t that disqualification and the reason for it need to be made public?

This bill is in Speaker Pete’s House Administration Committee, so it is likely never to see the light of day.

Senate Bill 249 will establish an Office of New Delawareans to help improve the lives and economic prosperity of those foreign-born individuals who come to Delaware and of all Delawareans generally.

This State enforces and provides for many services, licenses, and educational and economic opportunities, which makes it imperative to coordinate the work of state agencies, leverage relationships with partner and nonprofit organizations, and recommend policies and programs that support immigrant inclusion. Immigrants on the path to full civic and economic participation will benefit from a welcoming environment and policies that do all of the following:

Senate Bill 256 updates the crime of official misconduct to ensure appropriate accountability of public servants who abuse their positions of power and public trust.

The statute establishes a grade in the penalty for the official misconduct to be commensurate to the gravity of the misconduct. In addition, this statute conforms the discrimination language to the language used in the Hate Crimes statute. This Act will be known as the “Abuse of Power Prevention Act.”

Perhaps they should call this the Kathleen McGuiness Prevention Act.

House Bill 366 would require candidates to provide employer information of their donors on their campaign finance reports. The FEC already requires it for federal candidates.

The bill requires the Department of Elections to review every committee report for any contribution or expense violation and to note the report, on the Department’s website, as either “submitted but not reviewed” or “reviewed and final”.

House Bill 370 would create an Office of Inspector General, which sounds identical to the Office of Auditor if we didn’t elect criminals to run that office. It is a Republican bill, so it won’t get a vote this session, but we really do need to do away with an elected Auditor position and create a new independent state agency with an appointed nonpartisan Inspector General who gets nominated by the Governor and approved by the Senate for a five year term. And while we are at it, there is no reason why we need to elect the Treasurer or Insurance Commissioner. We have elected some real winners to those positions in the past too (present occupants excluded, well, sort of).

The inspector general created under this act would be charged with investigating complaints of waste, fraud, abuse or corruption regarding state employees or state executive branch agencies. State agencies would be required to cooperate with any investigation conducted by the office of inspector general, including full access to the personnel, records, and the premises under agency control.

Audits, investigations, inspections and reviews conducted by the office of inspector general would be subject to independent quality assurance reviews every three years, with the results shared with the public.

According to a survey conducted by the American Bar Association, 90 percent of early-career lawyers have student loans, averaging $130,000. The same survey found that Black borrowers accumulated more debt to obtain their law degree compared to other borrowers of other racial/ethnic backgrounds, and that most young lawyers who borrowed for their education reported that their debt caused them to delay or forego pursuing traditional life milestones, such as purchasing a home, marriage, and starting a family.

According to the survey, an overwhelming majority of borrowers – roughly 80 percent – indicated their debt influenced their choice of job or career in some way. Most borrowers reported that salary factored more heavily into their job selection than anticipated. Nearly a third of the sample indicated their position was less focused on public service or doing good than intended when they started law school.

In Delaware, the Office of Defense Services, and the Department of Justice, the primary employers of attorneys working for the state, found that student loan debt was an enormous burden. Attorneys reported monthly payments between $500 and $1,000 and debts exceeding $100,000. The student loan crisis, coupled with sizable salary pay gaps between the state and private sector, has created recruitment and retention issues in the legal sector of state government and has made it difficult to provide improved access to justice.

This bill establishes a Student Loan Repayment Program for attorneys employed with the State of Delaware working as attorneys. The program allows qualified applicants to apply for a payment from the State to the applicant’s lending agency to pay a portion of the applicant’s student loan debt. The purpose of the program is to improve recruitment and retention for legal service providers at a time when the state is having difficulty attracting attorneys passionate about public service. The amount of the award shall be no less than $2,500 and no more than $5,000 annually for 10 years. There is a salary cap of $110,000. The program will be administered by the Criminal Justice Council and overseen by a committee of stakeholders in the state’s legal system.