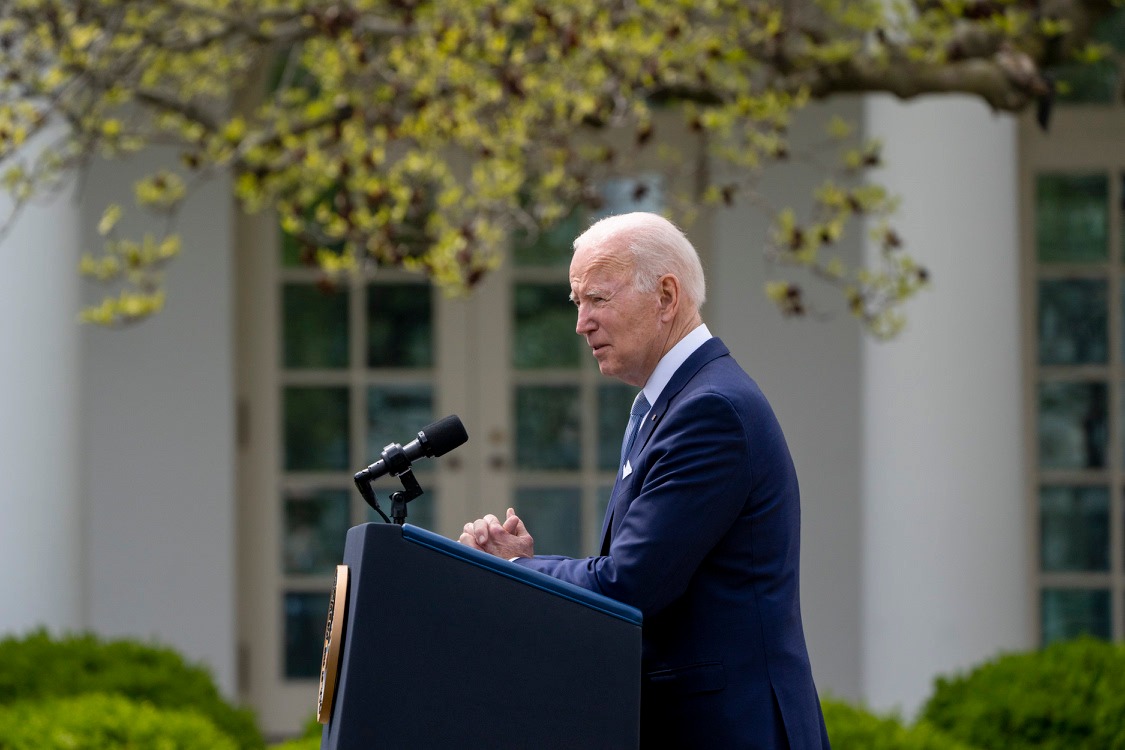 Russia’s flagship in the Black Sea has suffered “significant damage,” the Russian defense ministry acknowledged Thursday, as Ukraine said it attacked the vessel with a shore-to-ship missile, the Los Angeles Times reports.

“The Russian Defense Ministry says its naval flagship Moskva has sunk in the Black Sea while being towed in a storm. Ukraine had claimed it hit the cruiser with a missile strike,” the New York Times reports.

“Moscow denied the ship had been hit by missiles, but acknowledged it was on fire.”

“The Biden administration is holding internal discussions about sending a high-level official to Kyiv to show further support to Ukraine,” Politico reports.

“No decision on the potential visit has yet been made as deliberations continue inside the White House. President Joe Biden and Vice President Kamala Harris remain candidates to represent the U.S. in the Ukrainian capital, though it’s far more likely that a Cabinet member like Secretary of State Antony Blinken or Defense Secretary Lloyd Austin will go.”

President Biden was asked about reports that the U.S. may send a senior official to Ukraine:

It would be a high risk high reward manuever, literally.

“Treasury Secretary Janet Yellen said countries that maintain their ties to Russia after its invasion of Ukraine risk facing isolation from the global economy, sending a warning shot to nations that have so far remained neutral in the conflict,” the Wall Street Journal reports.

Said Yellen: “In this moment, where you have a dictator brutally invading another country targeting civilians, you have to contemplate what side of history you want to be on. And that is true for any country around the world.”

“I knew Putin very well. Almost as well as I know you, Sean… I will tell you, we talked about it, we talked about it a lot, he did want Ukraine, but I said, ‘You’re not going into Ukraine.’ He would never, ever have gone into Ukraine.” — Donald Trump, bragging about his relationship with Russian president Vladimir Putin with Sean Hannity.

He added that Russia will be forced to “seriously strengthen the grouping of ground forces and air defense, and deploy significant naval forces in the waters of the Gulf of Finland.”

Russia’s threats are laughable to the world now. It’s military has been proven to be incompetent and inferior. And while they have nuclear weapons, the minute they attempt to use a single one, the whole of Russia and its entire population would be vaporized by the United States. Everyone in Finland and Sweden knows this. So they can laugh off this threat.

“European Union officials are drafting the most contested measure yet to punish Russia for its invasion of Ukraine, an embargo on Russian oil products,” the New York Times reports.

“The bloc has long resisted a ban on Russian oil because of its enormous costs for Germany and its potential to disrupt politics around the region and increase energy prices.”

Associated Press: “Hundreds of Russians are facing charges for speaking out against the war in Ukraine since a repressive law was passed last month that outlaws the spread of “false information” about the invasion and disparaging the military.”

“The new policy, announced last week, has led some truckers to remain snarled in traffic for more than 30 hours, prompting desperate pleas from fruit and vegetable importers, the auto industry and other executives who said their products are being caught up in a political standoff.”

“The coronavirus pandemic and its ripple effects have snarled supply chains around the world, contributing to shipping backlogs, product shortages and the fastest inflation in decades,” the New York Times reports.

“But in a report released Thursday, White House economists argue that while the pandemic exposed vulnerabilities in the supply chain, it didn’t create them — and they warned that the problems won’t go away when the pandemic ends.”

Steven Rattner: “The debate over whether the recent surge in inflation is transitory or permanent has been settled. Now the question is whether the Federal Reserve can tame increasing inflationary turbulence and bring the economy to a soft touchdown.”

“Mounting evidence suggests a hard landing — in other words, a recession.”

Bloomberg: Larry Summers argues a recession is more likely than a soft landing.

“The White House is publicly arguing that the country has finally arrived at a promising new stage in the pandemic fight — one that a recent spike in Covid cases won’t spoil,” Politico reports.

“Underneath the displays of confidence, however, is simmering anxiety. Biden officials and others close to the federal response privately acknowledged that the next few weeks will determine whether the White House has truly entered a new era — or managed to misread the moment once again.”

Said Musk: “I am not playing the back-and-forth game. I have moved straight to the end. It’s a high price and your shareholders will love it.”

He added: “If the deal doesn’t work, given that I don’t have confidence in management nor do I believe I can drive the necessary change in the public market, I would need to reconsider my position as a shareholder.”

“Twitter is weighing a poison pill that would prevent Elon Musk from increasing his stake in the company significantly,” the Wall Street Journal reports.

Bloomberg: “Musk said he has a Plan B if Twitter rejects his offer, without offering more details.”

“Kentucky’s GOP-controlled legislature on Wednesday overrode Democratic Gov. Andy Beshear’s veto of a broad abortion bill that bans most abortions after 15 weeks of pregnancy, restricts access to medication abortion and makes it more difficult for a minor to obtain an abortion in the state,” CNN reports.

“Kentucky effectively suspended legal abortion access on Wednesday as the legislature enacted a sweeping anti-abortion law that took effect right away and forces providers to stop offering abortions until they can meet certain requirements,” Reuters reports.

“The impact of the law makes Kentucky the first U.S. state without legal abortion access since the 1973 Supreme Court case Roe v. Wade established the right to end a pregnancy before the fetus is viable, abortion providers say.”

Washington Post: “DeSantis’s decision to go after the Walt Disney Co. for its opposition to a bill banning the teaching of gender-related issues to kids younger than third grade — dubbed the ‘don’t say gay’ bill by its foes — opens a new front in the growing culture wars being waged by top Republican officials around the country in a midterm election year.”

“In states from Texas to California, Republicans are increasingly targeting issues important to their base, from abortion rights to medical care for transgender youth and the teaching of race’s impact on U.S. laws. In some cases, they are heavily restricting or banning those things.”

“Gov. Henry McMaster (R) signed into law the bill seeking changes to the Constitution after state lawmakers tailored the call for a convention to putting spending checks on the federal government, curbing the federal government’s jurisdiction and power, and setting term limits for Congress,” the AP reports.

“About 18 other states, mostly Republican-led and concentrated in the South, have passed similar proposals. Congress needs requests from 34 states to convene a convention of the states.”

Georgia Gov. Brian Kemp (R) signed a bill to allowed citizens to carry concealed handguns without first getting a license from the state, the Atlanta Journal Constitution reports.

Florida Gov. Ron DeSantis (R) “was expected to sign a 15-week abortion ban into law Thursday as the state moves to join a growing conservative push ahead of a U.S. Supreme Court decision that could limit access nationwide,” the AP reports.

“Stephen Miller, who served as a top aide to President Donald Trump, will appear Thursday before the congressional committee investigating the Jan. 6 insurrection,” the AP reports.

“Miller was a senior adviser for policy during the Trump administration and a central figure in many of the Republican’s policy decisions. He had resisted previous efforts by the committee, filing a lawsuit last month seeking to quash a committee subpoena for his phone records.”

“President Biden has authorized the National Archives and Records Administration to hand over a new tranche of Trump White House documents to the House committee investigating the Jan. 6, 2021, attack on the Capitol,” the Washington Post reports.

ProPublica reveals, for the first time ever, who makes the most income in America —and what taxes they pay.

To make it into the top 400, you needed to earn $110 million per year on average. A typical American making $40,000 would have to work for 2,750 years to make what the lowest-earning person in this group made in one.

Virginia Gov. Glenn Youngkin (R) “vetoed 25 bills this week — all from Democrats — that received bipartisan support in the General Assembly, a move some lawmakers viewed as an act of retaliation,” the Virginian-Pilot reports.

State Sen. Creigh Deeds (D) said “he believes the governor wanted to get back at certain Democrats for rejecting his picks for the state parole board, as well as for secretary of natural and historic resources.”

“A federal judge declined Wednesday to dismiss special counsel John Durham’s case against a Hillary Clinton campaign lawyer accused of lying to the FBI during its investigation of potential Trump-Russia collusion,” CNN reports.

Sen. Kyrsten Sinema (D-AZ) vowed to conduct herself in the same manner should Democrats try to revive the centerpiece of President Biden’s legislative agenda, the Arizona Republic reports.

She added: “You all know, the entire country knows, that I’m opposed to raising the corporate minimum tax rate.”

“When a California Democrat in Congress recently engaged in an extended conversation with Sen. Dianne Feinstein, they prepared for a rigorous policy discussion like those they’d had with her many times over the last 15 years,” the San Francisco Chronicle reports.

“Instead, the lawmaker said, they had to reintroduce themselves to Feinstein multiple times during an interaction that lasted several hours.”

“Rather than delve into policy, Feinstein, 88, repeated the same small-talk questions, like asking the lawmaker what mattered to voters in their district, they said, with no apparent recognition the two had already had a similar conversation.”

“With his sweeping domestic agenda on hold and images of horror in Ukraine dominating headlines, President Joe Biden is scrounging for ways to demonstrate that he’s still making progress for Americans at a time when many feel the country is heading in the wrong direction,” the AP reports.

“Six months out from the midterm elections, Biden’s team is betting that smaller, discrete announcements can break through to voters better than talk of transformational plans that are so far only aspirational. And as the global focus is on Ukraine, the White House is eager for Americans to see Biden tackling the kitchen table issues important to them –- none more so than the searing inflation exacerbated by the Russian invasion.”

Robert Tracinski: “Today’s equivalent of the John Birch Society is the QAnon conspiracy theory, an online grift that got out of hand and became a worldview. It posits its own spectacularly implausible conspiracy theory: That there is a global network of pedophiles who secretly run the world and control our politics so that they can abuse children.”

“This conspiracy theory has in turn spawned other conspiracy theories which claim that the 2020 election was stolen from Donald Trump. It is currently being mainstreamed in attacks on Disney as a corporation bent on “grooming” children to prepare them for exploitation by pedophiles.”

“And where are today’s conservative leaders, the intellectuals and politicians, the Buckleys and Reagans, who have the authority to shut this down?”

“Well, Ben Sasse wrote a piece once. But most of today’s conservative and Republican leaders are actually trying to hitch themselves to the new John Birchers.”