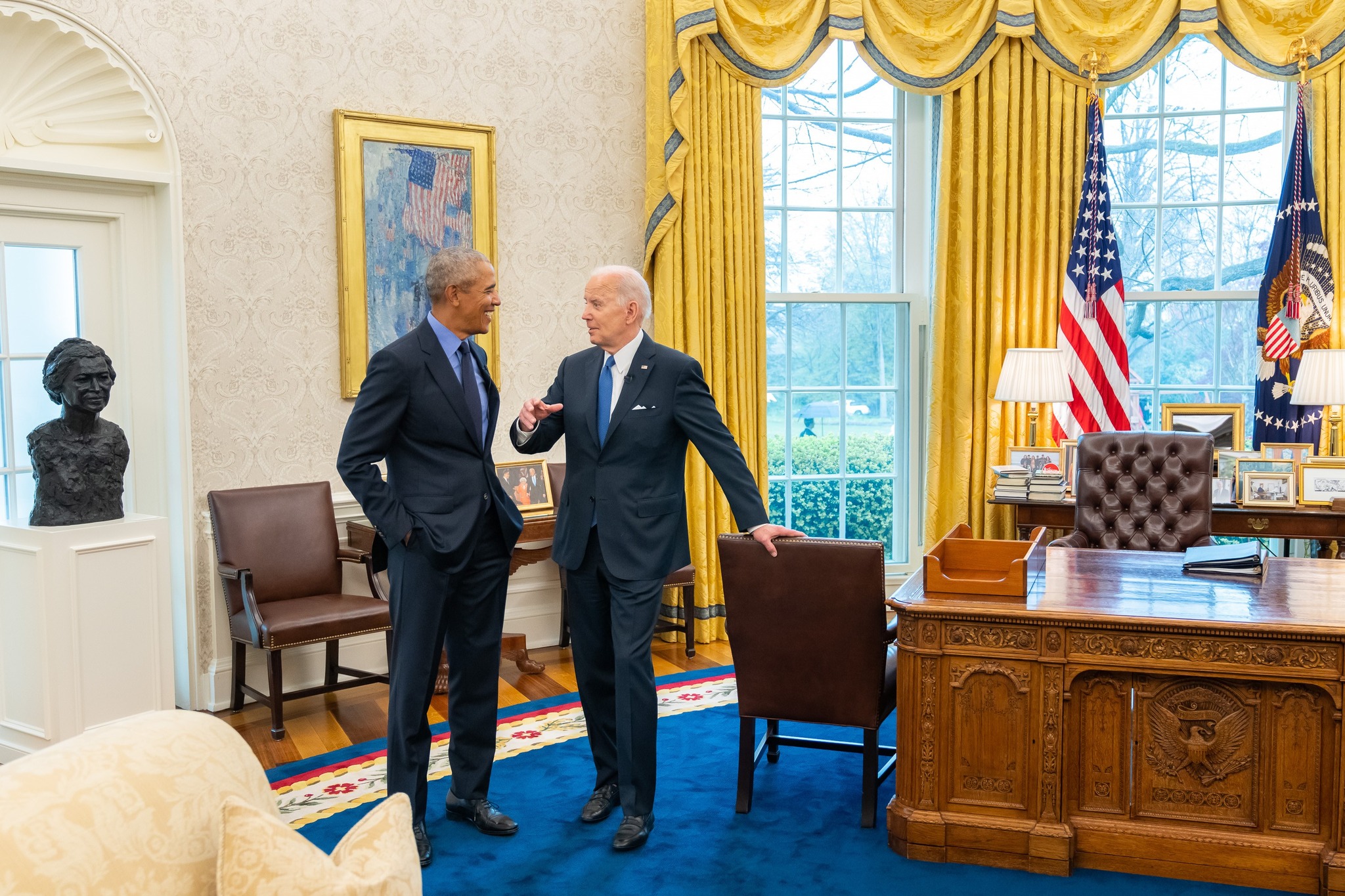 “President Biden has called Vladimir Putin a ‘war criminal,’ and said Monday the Russian leader should face a trial over the alleged atrocities in Ukrainian city of Bucha,” Axios reports. “While similar calls have echoed worldwide, Putin is unlikely to be held criminally accountable, at least as long as he remains in power.”

Ukrainian President Volodymyr Zelensky said in an overnight address that more than 300 people had been tortured and killed in the Bucha massacre, Axios reports.

New York Times: “An analysis of satellite images rebuts claims by Russia that the killing of civilians in Bucha, a suburb of Kyiv, occurred after its soldiers had left the town.”

“When images emerged over the weekend of the bodies of dead civilians lying on the streets of Bucha — some with their hands bound, some with gunshot wounds to the head — Russia’s Ministry of Defense denied responsibility. In a Telegram post on Sunday, the ministry suggested that the bodies had been recently placed on the streets after ‘all Russian units withdrew completely from Bucha’ around March 30.”

Josh Marshall: “A gruesome, horrifying topic but also a stunning, remarkable piece of data, visual and explanatory journalism. The Russian defense ministry has released a statement claiming that the bodies of executed civilians left on the streets of Bucha in Ukraine are another Ukrainian ‘provocation’, a hoax engineered by Ukraine meant to discredit Russia. They claim that the killings happened after the Russian army evacuated the city. The Times has an article that graphically and dramatically refutes these claims. You’ve likely seen those videos of drive-throughs through the shattered city in which the bodies, most shot execution style and many with bound hands, are visible on the side of the road. Times journalists cross-referenced these harrowing videos with satellite imagery which shows very clearly that the bodies were there when the town was under Russian occupation. It feels unseemly to to be so praiseful of something that is about chilling war crimes. But the work is still remarkable. The dispositive nature of the refutation is hard to fully appreciate without seeing it. See it here.”

Walter Russell Mead: “A Russian victory would inflict a massive blow to American prestige and the health of the North Atlantic Treaty Organization, especially if the West were seen as forcing Ukraine to surrender to Russian demands. Freezing the conflict is also perilous, as this would presumably leave Russia holding even more Ukrainian territory than it did following the 2014 invasions of Crimea and the Donbas. It would be hard to spin this as anything but a partial victory for Russia—and Mr. Putin would remain free to renew hostilities at a time of his choosing.”

“The failure to deter Mr. Putin’s attack on Ukraine is more than a failure of the Biden administration. Donald Trump, Barack Obama and George W. Bush must share the blame. This failure may prove to be even costlier than failing to prevent the 9/11 attacks, and President Biden’s place in history hangs on his ability to manage the consequences of this increasingly unspeakable and unpredictable war.”

The US Treasury said it would halt Russia’s ability to make debt payments in dollars through American banks, bringing Moscow a step closer to a possible default on its obligations to international investors, the Financial Times reports.

CNN: “The move was meant to force Moscow to make the difficult decision of whether it would use dollars that it has access to for payments on its debt or for other purposes, including supporting its war effort… Russia faces a historic default if it chooses to not do so.”

“Jake Sullivan, the president’s national security adviser, said that while Russia is refocusing offensive operations on eastern and southern Ukraine, Moscow will likely continue to strike the rest of the country ‘to cause terror,’” the New York Times reports,

“‘The next stage of this conflict may very well be protracted,’ he told reporters, and ‘will likely continue to include wanton and brazen attacks on civilian targets.’”

“The European Commission is set to propose broad new sanctions on Russia on Tuesday, European officials said, including a ban on imports of Russian coal, slashing the access of Russian road and shipping goods carriers into the bloc, targeting oligarchs and their families and blocking some machinery exports,” the Wall Street Journal reports.

“The measures, which will need backing from the bloc’s 27 member states, come after reports this weekend from Ukraine of potential war crimes against civilians by Russian forces, which has galvanized a push for tougher European measures against the Kremlin.”

“The announcement comes amid significant doubt about whether Congress will be able to prevent millions of current ACA enrollees from seeing large premium hikes next year — or from losing their insurance altogether.”

Washington Post: Obama’s return to the White House after a 5-year absence.

The Biden administration plans to freeze federal student loan payments through Aug. 31, extending a moratorium that has allowed millions of Americans to postpone payments during the coronavirus pandemic, the AP reports.

Philip Bump: “At this point, though, insinuations about Democrats embracing pedophilia or downplaying sex crimes victimizing children are not simply the political fringe making its way into the Capitol.”

“Instead, ‘pedophile’ or ‘groomer’ — a term used to describe people who try to prepare children for abuse — has of late replaced ‘socialist’ as a preferred, political, pejorative, long-standing potency of elevating fears about the safety of children has combined with specific political fights like the Jackson nomination and Florida’s new legislation limiting instruction about non-heterosexual relationships to spur a new rhetorical focus.”

“Hunter Biden is apparently spending his father’s presidency living in luxury in Malibu — and so is his taxpayer-funded security detail,” ABC News reports.

“The Secret Service detail protecting the president’s controversial son has been paying more than $30,000 a month to rent out a swanky Malibu, California, mansion for nearly a year.”

“The agency responsible for protecting the president and his family — among other ranking government officials — selected the property in order to be located as close as possible to Biden’s own rented mansion where he is paying about $20,000 a month according to property listings.”

“January 6 select committee Chairman Bennie Thompson told reporters Monday that he believes it will not be necessary for the panel to issue a subpoena to former Vice President Mike Pence and that the committee has been able to glean enough information that his testimony may not be necessary,” CNN reports.

The committee now believes it has enough to go on with reports of Trumpland’s efforts to pressure Pence to steal the 2020 election, Thompson said, “So what is it we need?” However, a subpoena for Pence isn’t off the table, sources from the committee told CNN.

Iran said that it thinks a revival of the nuclear deal with the U.S. is close to happening, Bloomberg reports.

“Chuck Schumer’s team is privately acknowledging to Senate Democrats that Eric Garcetti doesn’t currently have 50 votes within their caucus to be confirmed as ambassador to India,” Axios reports.

“Compensation for U.S. chief executives has rebounded as the pandemic recedes, putting it on pace to set a record amid a tight labor market that is also driving pay higher for many of their workers,” the Wall Street Journal reports.

“For Judge Ketanji Brown Jackson, taking her seat on the Supreme Court will be a study in hurry up and wait,” USA Today reports.

“Assuming President Joe Biden’s nominee to the nation’s highest court is confirmed by the Senate this week, Jackson will have to sit tight for nearly three months for her spot on the bench to open up – an unusually long delay that may have implications for public perceptions of the court, her ascension to it and a number of high-profile cases.”

Historian Julian Zelizer writes about an unusual Zoom call last summer in which Donald Trump tried to influence a group of historians to rate his presidency more highly.

“But if anything, our conversation with the former president underscored common criticisms: that he construed the presidency as a forum to prove his dealmaking prowess; that he sought flattery and believed too much of his own spin; that he dismissed substantive criticism as misinformed, politically motivated, ethically compromised, or otherwise cynical.”

“I didn’t win the election.” — Donald Trump, quoted by The Guardian, in a video interview with historians.

CDC Director Rochelle Walensky announced plans Monday to revamp the agency that has come under blistering criticism for its performance leading the U.S. response to the coronavirus pandemic, saying, “it is time to step back and strategically position CDC to support the future of public health,” the Washington Post reports.

New York Times: “As Republican activists aggressively pursue conservative social policies in state legislatures across the country, liberal states are taking defensive actions. Spurred by a U.S. Supreme Court that is expected to soon upend an array of longstanding rights, including the constitutional right to abortion, left-leaning lawmakers from Washington to Vermont have begun to expand access to abortion, bolster voting rights and denounce laws in conservative states targeting LGBTQ minors.”

“The flurry of action, particularly in the West, is intensifying already marked differences between life in liberal- and conservative-led parts of the country. And it’s a sign of the consequences when state governments are controlled increasingly by single parties. Control of legislative chambers is split between parties now in two states — Minnesota and Virginia — compared with 15 states 30 years ago.”

“The study found that murder rates in the 25 states Donald Trump carried in 2020 are 40% higher overall than in the states Joe Biden won.”

“Former Mississippi Gov. Phil Bryant (R) used the authority of his office, the weight of his political influence and the power of his connections to help his friend and retired NFL quarterback Brett Favre boost a fledgling pharmaceutical venture,” Mississippi Today reports.  “Then he tried to cash in on the project when he left office, text messages show.”

Former Rep. Tulsi Gabbard (D-HI), who has often said nice things about Russian president Vladimir Putin, changed her tune on Twitter:  “President Putin, not only is your brutal attack on Ukraine reprehensible, it has been a huge geopolitical error which has already cost Russia dearly. Those costs will get higher every day you remain in Ukraine. So it is in the best interest of the Russian people and the people of Ukraine, that you pull your forces out now. It is still not too late to salvage the kinship felt between the Russian and Ukrainian people.”

Rep. Lisa McClain (R-MI) falsely claimed that Donald Trump “caught” Osama bin Laden while he was president, USA Today reports.  “Trump was a private citizen in 2011, when President Barack Obama authorized the mission that killed bin Laden, the al-Qaida leader and architect of the 9/11 attacks on the United States.”