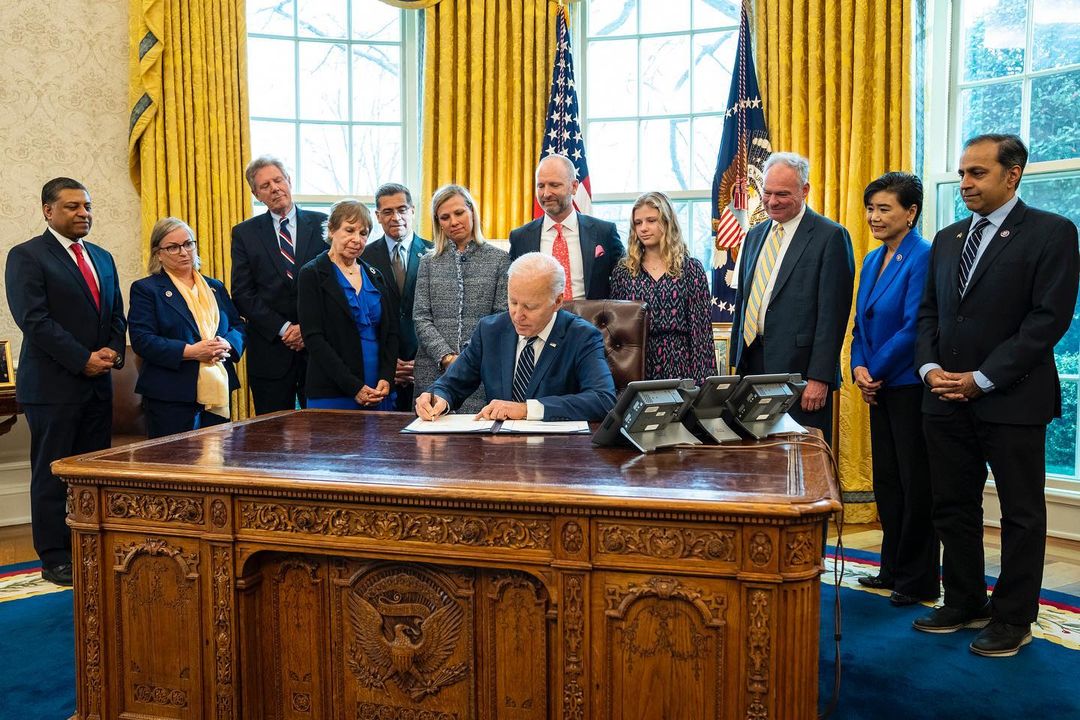 Harry Enten: “For about two years, the popularity of the president (whether Donald Trump or Joe Biden) was tied to how he was handling the coronavirus pandemic. Then a funny thing happened. As Covid-19 cases, hospitalizations and deaths started falling over the last few months, Biden’s approval rating on the pandemic went up while his overall approval rating stayed flat.”

“Why? A recent Gallup poll gives us good insight. Just 3% of Americans said the coronavirus or diseases are the top problem facing the country. That’s less than half the previous low for this answer (8%), which occurred in mid-2021 when case rates were also falling.”

“Two years ago (April 2020), a record 45% said the coronavirus was the top problem in the country. It’s not surprising that we’re nowhere near that level anymore. Still, I had to take a step back when I saw that 3%.”

Aaron Blake: “Evidence now suggests the narrative is coming up well short. Domestic pricing concerns are far outpacing Ukraine on Americans’ list of priorities, and Biden’s poll numbers on his handling of the economy continue to hit new lows. Whatever stomach Americans had for higher prices to support the war in Ukraine, it doesn’t appear particularly strong.”

“Former Alaska governor and vice-presidential candidate Sarah Palin (R) said Friday night she is running for her state’s congressional seat after years away from the national spotlight, casting herself as a fighter against the ‘radical left,’” the Washington Post reports.

New York Times: “She will be joining a crowded field of nearly 40 candidates to fill the House seat left vacant by Representative Don Young, whose unexpected death last month has spurred one of the largest political shifts in the state in 50 years.”

“In the past, Ms. Palin had suggested, but never followed through on, launching various campaigns for elected office several times in the years since she first electrified the base of the Republican Party after 2008 presidential nominee John McCain plucked her from obscurity and named her as his running mate.”

The Anchorage Daily News reports that 51 candidates — including Sarah Palin — have filed to run in the special election to fill the seat of the late Rep. Don Young (R-AK).  “Some of the candidates were proteges of Young; others were rivals. And their experience runs the gamut from political novices to veterans of statewide campaigns.”

Ohio U.S. Senate candidate J.D. Vance, who this week stated his opposition to elevating the war in Ukraine over immigration, writes in the Columbus Dispatch:

A new Wall Street Journal poll finds more American voters favor the idea of a 15-week abortion ban than oppose it, “as the Supreme Court prepares to issue a ruling that could alter the nation’s abortion landscape.”

“With lawmakers in several states pushing forward with bills that would ban abortion after 15 weeks of pregnancy, 48% of voters said they would strongly or somewhat favor such restrictions, with exemptions to protect the life of the mother, while 43% were in opposition.”

“For years, Herschel Walker has told the same inspiring story: that he graduated in the top 1% of his class at the University of Georgia. He’s told the story during motivational speeches over the years and as recently as 2017. The only problem: it’s not true,” CNN reports.

“Walker, who is a candidate in the Republican primary race for US Senate in Georgia, acknowledged in December that he did not graduate from Georgia after the Atlanta-Journal Constitution first reported that the false claim was listed on his campaign website.”

“Tommy Thompson (R) is meeting Thursday with former President Donald Trump as he ponders another run for governor,” the Milwaukee Journal Sentinel reports.

“The get-together comes three weeks after former Lt. Gov. Rebecca Kleefisch (R) had her own meeting with Trump as she pursues a bid for governor.”

Ron Brownstein: “Soaring turnout and big margins among young voters were central to the Democratic victories in the 2018 congressional and 2020 presidential elections. But with many young people expressing disenchantment with President Joe Biden’s performance, preserving those advantages looms as one of the biggest challenges facing Democrats in the 2022 midterms.”

“There’s widespread concern among Democrats that turnout for young people this November could fall back from its gains in 2018 toward the meager levels that contributed to the party’s crushing losses in the 2014 and 2010 midterm elections.”

Said Democratic pollster Ben Tulchin: “If you accept the status quo with young people, it’s not going to go great. Turnout is not going to be good.”

Ruy Teixeira: “All the political signals are screaming: Democrats must move to the center, both to mitigate their losses in 2022 and to keep alive their hopes of retaining the Presidency in 2024 and building political power thereafter.”

Playbook: “A Democratic source recently complained to us about what some see as swampy self-promotion over at the NRCC: According to recent FEC filings, the GOP committee has spent more than $75,000 on bulk book sales, stocking up on Rep. Jim Jordan’s (R-OH) Do What You Said You Would Do, and giving away copies as “donor mementos.”

“Even as the tactic isn’t new, from where we sit, it’s surprising for another reason: Once upon a time, a half-decade ago, Jordan and the NRCC were at war over strategy and candidates — not to mention his group, the Freedom Caucus’ habit of not paying NRCC dues. To see the party’s official campaign apparatus promoting Jordan’s book is still a shock to those of us who covered that era.”

“They’re pushing for environmental reforms, embracing single-payer health care and calling for more government assistance. But increasingly, many are reluctant to call themselves ‘progressives,’” The Hill reports.  “Left-wing candidates from Pennsylvania to North Carolina to Missouri are shying away from the P-word on the campaign trail, in messaging and online fundraising, and even in media blitzes, signaling an attempt to rebrand their wing of the party as Democrats debate how to win the midterm elections.”

“Federal regulators last week allowed a legal loophole that could effectively let former members of Congress spend leftover campaign money on personal expenses,” Axios reports.  “Campaign finance reform advocates say that opens the door to former public servants to live large off of money intended for political contests. Scores are already retired, and more members are heading for the door this fall ahead of potential Democratic losses and GOP challenges.”

Mike Pompeo is running — if not for president, then for a chance to be Donald Trump’s running mate should the former president mount another campaign,” NBC News reports.  “Pompeo is methodically laying the groundwork for his own 2024 presidential bid if Trump skips the race. And Trump has already told associates that Pompeo, one of the few top Cabinet officials who never lost favor with him, could make his vice presidential short list if he runs again.”

Charlie Cook: “The challenge is that so many integrally involved in the respective parties have lost all perspective and do not realize how ideological their party has become.”

“When people ask me that question, as happened just this past week in Chicago, my answer is that with ideological sorting, the nature of the two parties will not change until the moderates or centrists decide they want to take back their respective parties, pulling the GOP back to the center right and Democrats to the center left. Only then will we return to anything like the stability and normalcy that so many people want.”