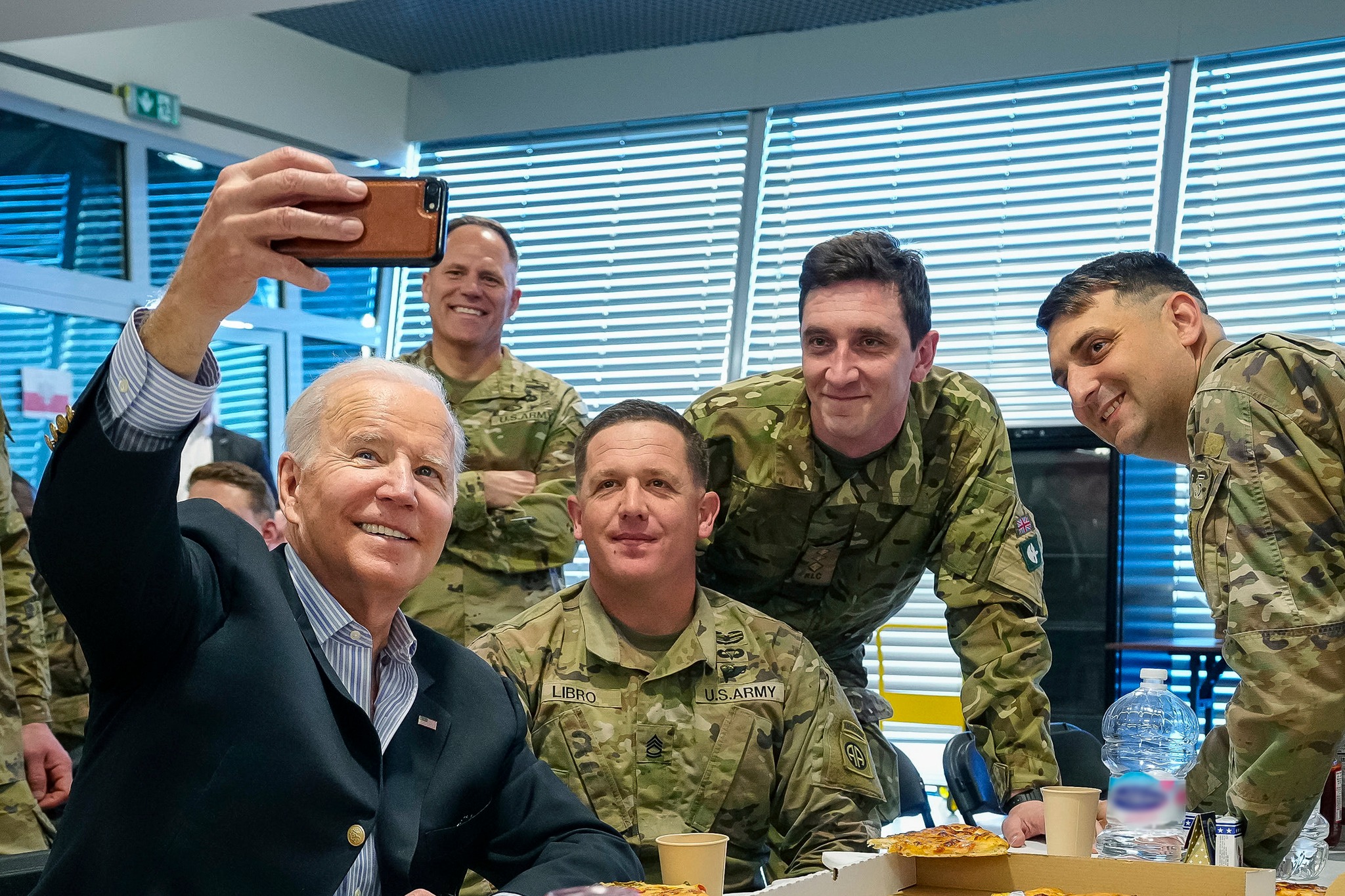 Dan Balz: “Democrats need a change in the national mood: events or things to alter what Gallup and other pollsters continue to report. Here are three factors to watch:

“For now, the good jobs report is something for Biden and the Democrats to point to as progress, though recently, monthly employment numbers haven’t had any real political impact. Democrats have only a few months left to begin turning the lines on all these polls upward.”

“Rep. Marjorie Taylor Greene (R-GA) this week accused Walt Disney Co. of sexualizing children after the entertainment giant criticized a Florida education law that critics have dubbed the ‘Don’t Say Gay’ bill — and vowed to fight against it,” Insider reports.

Said Greene: “Anyone who opposes anti-grooming laws like the one in Florida is pro-child predator. Stop sexualizing children.”

“What Greene didn’t mention is that she is a Disney investor.”

“Nearly 300 civilians have been buried in mass graves by local authorities in this small suburb of Kyiv after Russian troops withdrew last week, one of several regions where Ukrainian officials and independent rights watchdogs say they are uncovering evidence of war crimes perpetrated by occupation forces,” the Wall Street Journal reports.

“Footage taken by the Ukrainian military shortly after Russian forces abandoned Bucha showed streets littered with bodies of civilians, some of them with their hands tied. Human Rights Watch on Sunday released a report documenting cases of rape and summary executions in Russian-occupied parts of Ukraine, including Bucha, as well as other crimes.”

Axios: “Ukraine’s forces retook the Kyiv region and northern areas of the country Saturday after Russian troops pulled out, leaving behind landmines and a trail of bodies.”

White House chief of staff Ron Klain said Sunday the Ukrainians “are winning the war” in the northern part of their country but the overall war is nowhere near won, Politico reports.

Thomas Friedman: “To be sure, Ukraine’s democracy is frail and the country has had its own serious issues with oligarchs and corruption. Kyiv’s burning aspiration, though, was not to join NATO but to join the European Union, and it was in the process of cleaning itself up to do just that.”

“That’s what really triggered this war. Putin was never going to let a Slavic Ukraine become a successful free-market democracy in the E.U. next door to his stagnating Slavic Russian kleptocracy. The contrast would have been intolerable for him, and that is why he is trying to erase Ukraine.”

“But Putin, it turns out, had no clue what world he was living in, no clue about the frailties of his own system, no clue how much the whole free, democratic world could and would join the fight against him in Ukraine, and no clue, most of all, about how many people would be watching.”

New York Times: “Russia vastly underestimated Ukrainians’ resolve to defend their homeland. And a Russian military trained for open spaces has also struggled with basic realities of urban warfare. Even a finely orchestrated military would be challenged by the block-to-block fighting required to secure Kyiv. The Russian army has failed to even surround it.”

“Lithuania has stopped importing gas from Russia as of the beginning of April, the country’s ministry of energy announced on Saturday,” Axios reports.

Ross Douthat: “If we intend to make economic war on Russia for a generation, we should be cleareyed about the calculus. In the hopes of making a dangerous great power as weak as possible, we will make it more likely that Putinism rules for decades, and that Russia remains our deadly enemy for as long as anyone can reasonably foresee.”

Julia Ioffe: “Contrary to Western optimism, there is emerging evidence that, after the initial shock and despair of a poorly planned invasion, Russians are now rallying around their flag and their president. Some are refusing to accept anything less than total victory.”

Israel’s ambassador to Ukraine denounced the killing of civilians in a Kyiv suburb as a “war crime” on Sunday, in a break from the more restrained rhetoric exhibited by Israeli officials since Russia invaded the former Soviet republic just over a month ago, Haaretz reports.

However, the Israeli Foreign Ministry quickly clarified the Ukraine envoy’s comments saying it is not an official position: “It’s a tweet by the ambassador regarding the photos. He didn’t blame Russia.”

At rally in Michigan last night, former President Donald Trump suggested returning American soldiers to Afghanistan by sayin “maybe we ought to go in and take it back.”

The crowd cheered as Trump said leaving the “finest military equipment in the world” as the “dumbest thing I’ve ever seen.”

“Former President Donald Trump tried to boost select Michigan candidates running for secretary of state, attorney general and the Legislature in a nearly two-hour Saturday address that aimed to cement his influence in the Michigan GOP,” the Detroit News reports,

Said Trump: “If they won’t give you that assurance, don’t give them your vote.”

Russian president Vladimir President Putin was visited by a cancer surgeon 35 times in four years at his Black Sea residence, the Times of London reports.

Putin is also said “to have turned to alternative medicine, indulging in a practice of bathing in blood extracted from severed deer antlers.”

“Prime Minister Imran Khan dissolved Pakistan’s National Assembly and called for new elections on Sunday, blocking a no-confidence vote that had been widely expected to remove him from office and threatening to plunge the country into a constitutional crisis,” the New York Times reports.

Pakistan Prime Minister Imran Khan told the New York Times that a forthcoming no confidence vote in parliament was part of a plot by the United States to orchestrate a “regime change” in Pakistan — doubling down on an allegation he has pushed in recent days as his political support has slipped away.

Washington Post: “Just days ahead of Jackson’s likely confirmation this week, Romney remains one of the most intriguing holdouts on her nomination, sending clear signals that he is weighing not just Jackson’s qualifications and legal philosophy but also the historic nature of her nomination as the first Black woman who would serve on the Supreme Court.”

“Romney’s stated openness to Jackson is all the more striking since last year he opposed her nomination to the U.S. Court of Appeals for the D.C. Circuit, considered the second-most powerful court in the nation and a de facto training ground for Supreme Court justices.”

“The Senate is poised to vote this week on whether to confirm Ketanji Brown Jackson to the Supreme Court, and she is in good shape to win a lifetime appointment and become the first Black woman on the court,” NBC News reports.

“The Judiciary Committee is set to meet Monday and vote on whether to advance Jackson, 51, a judge on the U.S. Circuit Court of Appeals for Washington, D.C. The panel, split evenly between the parties, is expected to deadlock and require Democrats to hold a separate vote to ‘discharge’ the nomination to the full Senate.”

“Democratic leaders hope to hold a final vote on the Senate floor as early as Thursday, but it could slide to Friday if Republicans use the delaying tactics available to the minority party to drag it out.”

Rosie Bradbury: “I downloaded the Truth Social app on launch day and created an account – only to be told I’d been put on a waitlist in spot number 157,120. Three weeks later, on March 14, I was finally allowed to use the app.”

“And I found…not very much. It was like a conservative ghost town that had been overrun by bots.”

“The states that received the most money — California, Alabama, New York, South Carolina and Missouri — were either large and well-populated or had influential senators in leadership or on the committee that oversees spending.”

Baton Rouge Advocate: “Over the last 15 years, Attorney General Jeff Landry (R) has funneled more than $420,000 from his campaign war chest into a staffing company that he owns, an unusual arrangement that circumvents the common practice of political figures around the state and ensures the public does not know who he is paying to work on his campaign.”

“Landry, who is widely expected to run for governor in 2023, has been far more successful at political fundraising than his presumptive opponents.”