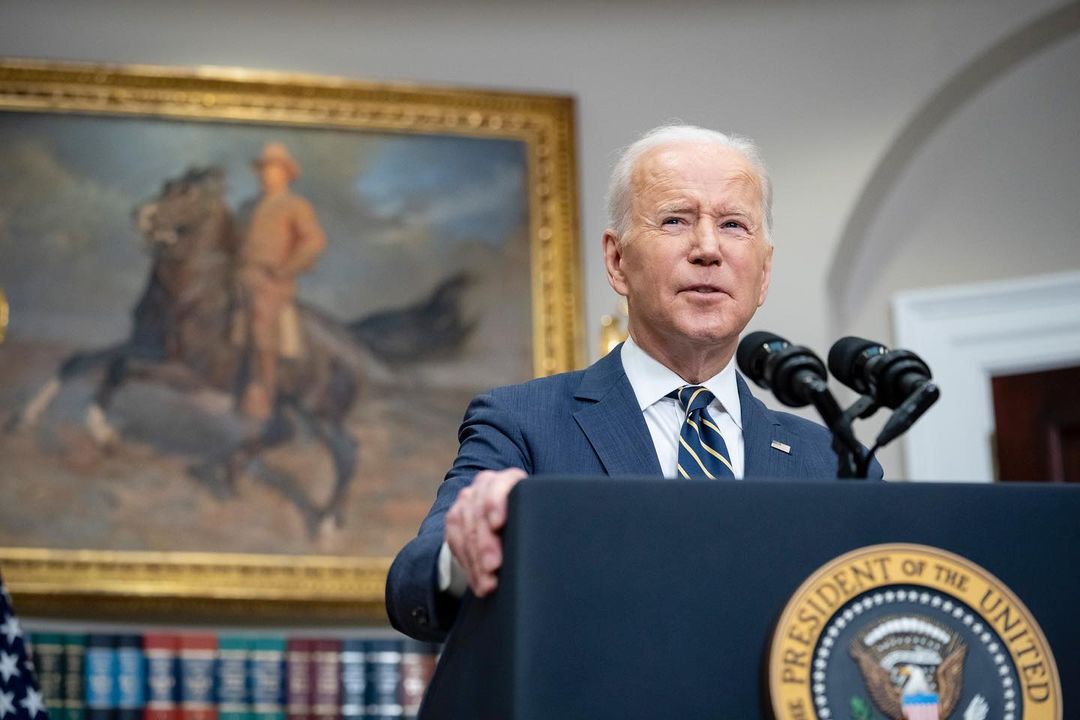 “The Russian forces that were intent on overwhelming Kyiv at the war’s start with tanks and artillery retreated under fire across a broad front on Saturday, leaving behind them dead soldiers and burned vehicles,” the New York Times reports.

“The withdrawal suggested the possibility of a major turn in the six-week war — the collapse, at least for now, of Russia’s initial attempt to seize Kyiv, the Ukrainian capital, and the end of its hopes for the quick subjugation of the nation.”

“Moscow has described the withdrawal as a tactical move to regroup and reposition its forces for a major push in the Donbas region of eastern Ukraine. While there are early indications that the military is following through on that plan, analysts say it cannot obscure the magnitude of the defeat.”

“Ukrainian President Volodymyr Zelenskyy warned his people early Saturday that retreating Russian forces were creating ‘a complete disaster’ outside the capital as they leave mines across ‘the whole territory,’ including around homes and corpses,” the AP reports.

“He issued the warning as the humanitarian crisis in the encircled city of Mariupol deepened, with Russian forces blocking evacuation operations for the second day in a row. Meanwhile, the Kremlin accused the Ukrainians of launching a helicopter attack on a fuel depot on Russian soil.”

“Ukraine denied responsibility for the fiery blast, but if Moscow’s claim is confirmed, it would be the war’s first known attack in which Ukrainian aircraft penetrated Russian airspace.”

“The Biden administration will work with allies to transfer Soviet-made tanks to bolster Ukrainian defenses in the country’s eastern Donbas region,” the New York Times reports.

“The decision to act as an intermediary to help transfer the Soviet-made tanks, which Ukrainian troops know how to use, comes in response to a request from President Volodymyr Zelensky of Ukraine, the official said. It marks the first time in the war that the United States has helped transfer tanks.”

“China staged a huge cyberattack on Ukraine’s military and nuclear facilities in the build-up to Russia’s invasion,” the Times of London reports.

“More than 600 websites belonging to the defence ministry in Kyiv and other institutions suffered thousands of hacking attempts which were co-ordinated by the Chinese government, according to Ukraine’s security service, the SBU.”

“The spy agency revealed that, in an apparent sign of complicity in the invasion, Chinese attacks started before the end of the Winter Olympics and peaked on February 23, the day before Russian troops and tanks crossed the border.”

“Lawmakers investigating the Jan. 6 attack on the Capitol are increasingly going public with critical statements, court filings and more to deliver a blunt message to Attorney General Merrick Garland and the Department of Justice,” the AP reports.

“President Donald Trump and his allies likely committed crimes, they say. And it’s up to you to do something about it.”

“The lawmakers seem nearly certain to send a criminal referral to the Justice Department once their work is through.”

CNN: Garland says the only pressure DOJ feels on January 6 probes is to “do the right thing.”

New York Times: “The attorney general’s deliberative approach has come to frustrate Democratic allies of the White House and, at times, President Biden himself. As recently as late last year, Mr. Biden confided to his inner circle that he believed former President Donald J. Trump was a threat to democracy and should be prosecuted, according to two people familiar with his comments.”

“And while the president has never communicated his frustrations directly to Mr. Garland, he has said privately that he wanted Mr. Garland to act less like a ponderous judge and more like a prosecutor who is willing to take decisive action over the events of Jan. 6.”

“The committee interviewed Trump’s presidential diarist roughly two weeks ago. That interview has not been previously reported, nor has the testimony describing a noticeable drop-off in information provided by Oval Office staff leading up to January 6.”

CNN: “When John Kelly was Trump’s chief of staff, he monitored the switchboard to see who Trump was talking to. Trump would often tell people to hang up and call him back on his cellphone if he didn’t want it showing up on the switchboard call log.”

Said one former Trump official: “Trump hated people knowing who he spoke to, including from the residence at night when they went through the switchboard.”

“Senate Minority Leader Mitch McConnell (R-KY) is putting public and private pressure on Senate Republican colleagues to oppose President Biden’s nominee to the Supreme Court, despite the historic nature of her nomination to be the first Black woman on the court,” The Hill reports.

“McConnell has dug in against Biden’s nominee, arguing the vote isn’t about ‘race or gender’ but about Jackson’s record, which he says is too soft on crime and indicates she’ll likely turn into an activist judge on the bench.”

Washington Post: “Tehran’s demand that the United States lift its designation of the Iranian Revolutionary Guard Corps as a foreign terrorist organization, and U.S. refusal so far to do that, have brought the year-long negotiations over reviving the Iran nuclear deal to a halt, with no new meetings scheduled and little obvious room for compromise.”

Politico: “The U.S. unemployment rate hit 3.6 percent today, as 431,000 jobs were added during the month of March. It’s the type of data point that should make a White House giddy. And yet, one can’t help but smell the whiff of frustration emanating from 1600 Pennsylvania Avenue.”

“There is a remarkable disconnect among the American public involving the reality of the jobs market and the perception of it. A little-noticed survey by Navigator Research last month showed that 37 percent of the public thought that more jobs had been lost (yes, lost) over the last year while just 28 percent thought that they had been gained. That was particularly pronounced among Republicans, 47 percent of whom believed jobs had been lost over the last 12 months.”

“Needless to say, that’s wildly inaccurate: The unemployment rate was 6.4 percent when Joe Biden took office… That these basic facts aren’t translating to the public says a lot about how news is disseminated and consumed.”

“The House passed a bill to legalize marijuana for the second consecutive Congress, signaling a continued interest by Democrats in overhauling the federal approach to a substance that is legal for medical use in 37 states,” Roll Call reports.

“The 220-204 vote on the bill, which would decriminalize the possession and use of marijuana, fell mostly along party lines Friday. Three Republicans voted in favor of the bill, and two Democrats voted against.”

“When a similar bill passed in 2020, the GOP-controlled Senate declined to take it up, but lawmakers are hopeful that growing public support and a Democratic majority in the chamber could spur action.”

Sen. Joe Manchin (D-WV) slammed President Biden’s decision to rescind Title 42, a Trump-era health order used to rapidly deport people who cross the border without authorization, as “a frightening decision” that would likely increase the volume of migrants at the southern border, The Hill reports.

Said Manchin: “Title 42 has been an essential tool in combatting the spread of Covid-19 and controlling the influx of migrants at our southern border. We are already facing an unprecedented increase in migrants this year, and that will only get worse if the Administration ends the Title 42 policy.”

The CDC is warning of an accelerating mental health crisis among adolescents, with more than 4 in 10 teens reporting that they feel “persistently sad or hopeless,” and 1 in 5 saying they have contemplated suicide, the Washington Post reports.

“Starbucks earlier this month announced its first commitment to eliminate harmful PFAS chemicals in its food packaging in both the U.S. and abroad, joining other large companies in banning the toxics,” Environmental Health News reports.

“An Alabama man who brought a truckload of weapons, ammunition, and Molotov cocktails near the U.S. Capitol building on Jan. 6 was sentenced to 46 months in prison on Friday,” NBC News reports.

“The wave of libel suits former Rep. Devin Nunes (R-CA) brought against news organizations and social media companies over the past few years continues to fizzle out in court.,” Politico reports. “The D.C. Circuit Court of Appeals issued a ruling Friday upholding a lower judge’s decision to toss out a $250 million suit Nunes filed over a February 2020 Washington Post article. The story discussed a controversy over a briefing an intelligence official gave Congress, stating that Russian officials wanted to see President Donald Trump reelected.”

The congressional naming commission which was set up to remove Confederate names from military bases will review the names of “more than 750 Department of Defense items” that include everything from military bases to streets and bridges, to determine whether their names “commemorate the Confederacy,” CNN  reports.

White House press secretary Jen Psaki is in exclusive talks with MSNBC to join the network after she leaves the White House around May, Axios reports.   Puck reports that Psaki also had conversations with CNN and that other networks had expressed interest in signing her.

“The U.S. Army would fall below 1 million soldiers for the first time in two decades under a new budget proposal as leaders struggle with recruitment in the aftermath of the coronavirus pandemic,” Bloomberg reports.

“The active-duty Army would drop from the 485,000 soldiers Congress authorized for this year to 473,000, a reduction of 12,000 people, as part of the service’s fiscal 2023 budget proposal. When combined with flat National Guard and Reserve forces, the service would have a total of 998,500 soldiers.”