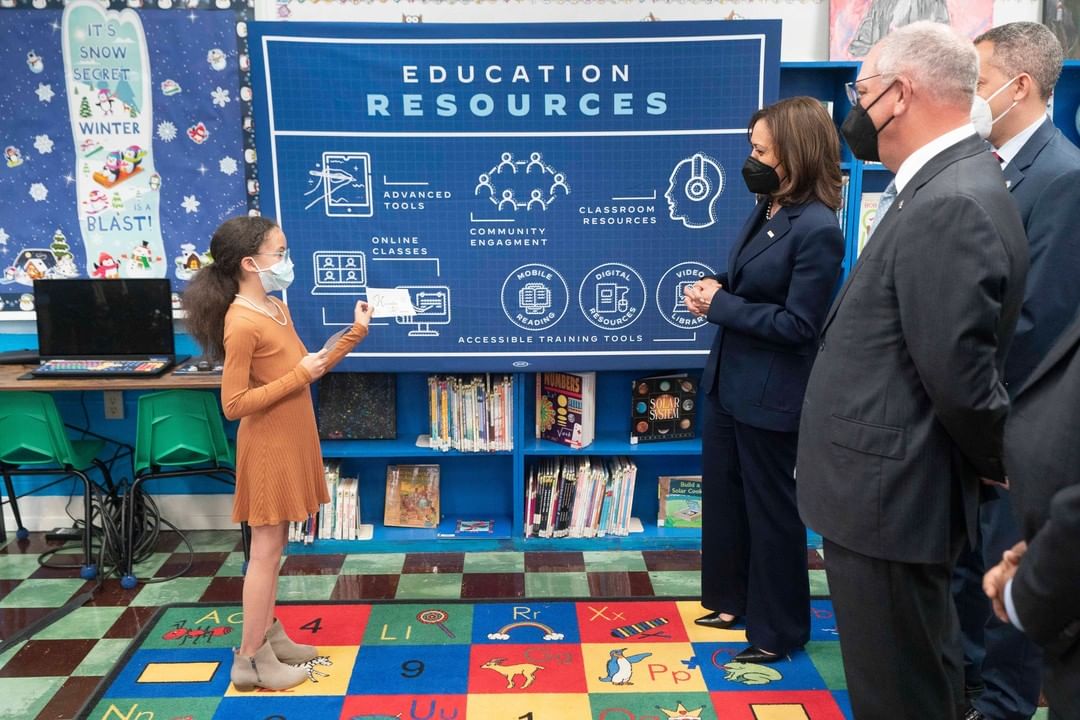 A new Marquette Law School Poll finds 66% of adults say that, if senators, they would support the nomination of Katanji Brown Jackson to the Supreme Court, while 34% would oppose her nomination. She is seen as “very qualified” by 46% of the public and as “somewhat qualified” by 42%, while 12% see her as “not qualified.”

Apparently none of the GOP attacks on Jackson stuck.

A new OH Predictive Insights poll in Arizona finds President Biden’s approval rate has hit a new low of 40% to 55%. Biden is also facing negative numbers on nearly every issue that has dominated news headlines in recent weeks.

If Republicans nominate former Gov. Eric Greitens (R), this could be a competitive race.

Busch Valentine is the daughter of the late August Busch Jr., who was instrumental in the success of the St. Louis-based brewing giant Anheuser-Busch, and she previously donated $4 million of her money to St. Louis University’s nursing school (now known as the Trudy Busch Valentine School of Nursing). Busch Valentine will face Marine veteran Lucas Kunce in the August primary.

GEORGIA GOVERNOR. David Perdue (R) said he “misunderstood” the Donald Trump supporters who chanted about imprisoning Gov. Brian Kemp (R) when he smiled and flashed them a thumbs-up sign at the former president’s rally, the Atlanta Journal Constitution reports.

Perdue is continuing his all-Trump all-the-time advertising strategy for the May GOP primary with a new commercial that uses footage of Trump bashing both incumbent Brian Kemp and Democrat Stacey Abrams at his Saturday rally.

The spot begins with the GOP master bellowing, “Brian Kemp is a turncoat, he’s a coward, he’s a complete and total disaster.” As the crowd repeatedly boos, Trump eggs on his followers by claiming that the governor was “bullied into a consent decree engineered by Stacey Abrams and allowed massive voter fraud to occur throughout the state of Georgia.” The only mention of Perdue in the spot comes afterwards as Trump proclaims that he’ll “never surrender to Stacey Abrams and the militant radical left, and with your vote we’re going to rescue the state of Georgia from the RINOs.”

Meanwhile, Perdue’s allies at Georgia Action Fund are spending another $955,000 on TV advertising for him, which AdImpact says takes the group’s total to $1.64 million.

“Rick Scott likes to think of himself as Gen. Ulysses S. Grant during the Civil War,” the AP reports.  “Barely halfway through his first Senate term, the Florida Republican is already leaning into a fight against his own party’s leadership as he navigates a delicate alliance with former President Donald Trump and pushes a handcrafted policy agenda that many Republicans reject.”

“But Scott, who is also the Senate GOP’s midterm chief, insists he has only begun to fight.”

Playbook: “All signs point to a typical midterm election this year in which the president’s party suffers double-digit losses in the House. The GOP has the big structural advantages on its side: a Democratic president with low approval ratings, a sour public mood driven by inflation concerns and an edge in polling on issues like crime, education and immigration that are proving important to voters in the crucial swing suburbs where the midterms will be decided.”

“One of the few ways Republicans could potentially blow this electoral equivalent of a layup is if former President Donald Trump suddenly returns to center court.”

“Trump is not toxic for his party everywhere. Republicans did better than expected in House races in 2020 because of the high MAGA turnout Trump generated. But he’s deadly for the GOP in the decisive suburbs at the heart of 2022 politics. Recall how Virginia’s Glenn Youngkin treated Trump like Voldemort, concerned that even uttering his name would repel potential supporters in NoVa.”

“The story of Rumble’s success is instructive for both sides of the tense debate over balancing the right to free speech with the growing threat that disinformation poses to the stability of governments around the globe. For those who argue that Google and Facebook algorithms are blunt, deeply flawed instruments for policing discourse, Rumble offers a welcome alternative, albeit an imperfect one. And for those who fear that lawmakers and technology companies aren’t doing enough to tame false and fabricated information ahead of the next presidential election, Rumble has opened up a potentially dangerous loophole.”

“Facebook parent company Meta is paying one of the biggest Republican consulting firms in the country to orchestrate a nationwide campaign seeking to turn the public against TikTok,” the Washington Post reports.

“The campaign includes placing op-eds and letters to the editor in major regional news outlets, promoting dubious stories about alleged TikTok trends that actually originated on Facebook, and pushing to draw political reporters and local politicians into helping take down its biggest competitor.”

“Former president Donald Trump’s Truth Social app is seeing a 93% drop in signups and similarly steep decline in traffic after a rocky rollout last month fraught with technical issues and an extensive waiting list for new signups to actually use the service,” The Wrap reports.

“After going live on President’s Day, the Twitter-lookalike app saw installs decline by more than 800,000 since its launch week… Installs on the Apple app store this month have fallen to about 60,000 per week, based on early estimates.”

LOUISIANA GOVERNOR. “There’s no Senate Republican quite like Bill Cassidy: He voted to convict Donald Trump of inciting an insurrection after getting reelected by 40 points, while helping cut big deals on Covid relief and infrastructure,”  Politico reports. “Now he’s eyeing the governor’s office in Baton Rouge.”

“The Louisianan confirmed in an interview that he’s considering running for governor in his state, which has elected conservative Democrat John Bel Edwards to two consecutive terms — the first one over former Sen. David Vitter (R-La.). Cassidy said it’s not his idea, but that he’s ‘been approached to run for governor’ by people in the state.”

WISCONSIN GOVERNOR. Former Lt. Gov. Rebecca Kleefisch’s new spot for the August GOP primary features her bragging about what an “unapologetic” conservative she is.

CONNECTICUT GOVERNOR. Democratic incumbent Ned Lamont uses his first TV spot to talk about how he managed to balance the budget without raising taxes, saying, “We turned a massive budget deficit into a $3 billion surplus. While investing in schools, healthcare, and public safety.” The governor continues, “And now we are cutting your car tax and your gas tax.”

HAWAII GOVERNOR. Civil Beat reports that Lt. Gov. Josh Green has received endorsements from two of the state’s most prominent unions, the Hawaii State Teachers Association and Hawaii Government Employees Association, for the August Democratic primary. Several other labor groups, including the Hawaii Firefighters Association, are also behind Green, who has posted huge leads in the few surveys that have been released.

OHIO GOVERNOR. Gov. Mike DeWine is spending $131,000 on cable for his first buy for the Republican primary, a spot that extols him for standing up to teachers unions and for police against “radicals.”

The commercial comes a week after former Rep. Jim Renacci, who is DeWine’s most prominent intra-party foe, deployed $104,000 on his own cable ads, which attack the incumbent for “turning his back” on both Trump and Ohio. Renacci’s commercial continues by going after DeWine for “mandating masks on our kids” and argues he’s been “governing Ohio just like his liberal friends Joe Biden and Andrew Cuomo would.” This is the first time we’ve seen Cuomo appear in a TV spot outside New York since he resigned last year, and it doesn’t even allude to the many scandals that resulted in his downfall.

ALASKA AT LARGE CD. Former state Sen. John Coghill has announced that he’ll compete in the June special top-four primary to succeed his fellow Republican, the late Rep. Don Young. Coghill served for 22 years in the legislature and amassed a number of powerful posts, but the Senate Rules Committee chair lost renomination by 14 votes to Robert Myers in 2020 under the old partisan primary system. Myers, who ran to Coghill’s right, said of his tiny win, “I know that this election was not about how much people like me. This election was about how much people hated John Coghill.”

TENNESSEE 5TH CD. Tennessee lawmakers have sent a bill to Gov. Bill Lee that would impose a requirement that House candidates reside in their districts for three years before becoming eligible to run, a move that seems to be aimed at blocking one contender in particular: former State Department spokesperson Morgan Ortagus, who is Trump’s endorsed candidate for the August Republican primary in the newly gerrymandered 5th District.

The legislation could have a tough time surviving a court challenge, however, because of a 1995 Supreme Court decision holding that states cannot add further qualifications to candidates for Congress that aren’t already in the Constitution: namely, a minimum age and length of U.S. citizenship, and residency in the state—but, crucially, not the district—they’re seeking to represent.

However, one of the measure’s proponents said he hoped that the court would now revisit its earlier ruling, a five-to-four decision that saw swing Justice Anthony Kennedy join four liberal justices in the majority to strike down term-limits laws. On the other side, a well-financed group called Tennessee Conservative PAC says it would sue to stop the bill, though Ortagus herself hasn’t said if she’d go to court.

Ortagus moved to Tennessee last year from D.C., and critics have cast her as an interloper. She didn’t help her cause last month when, during an appearance on a conservative radio show, she bombed the host’s quiz about the new 5th District and state. Many observers have argued that the legislature crafted this bill as an attack on Ortagus, especially since its sponsor, state Sen. Frank Niceley, has made it clear he’s not a fan: Niceley said earlier this month, “I’ll vote for Trump as long as he lives. But I don’t want him coming out here to tell me who to vote for.”

Another GOP contender, music video producer Robby Starbuck, has argued that this legislation is meant to harm him as well. However, the former Californian now says that he’d meet the residency requirements of the newest version of the bill.