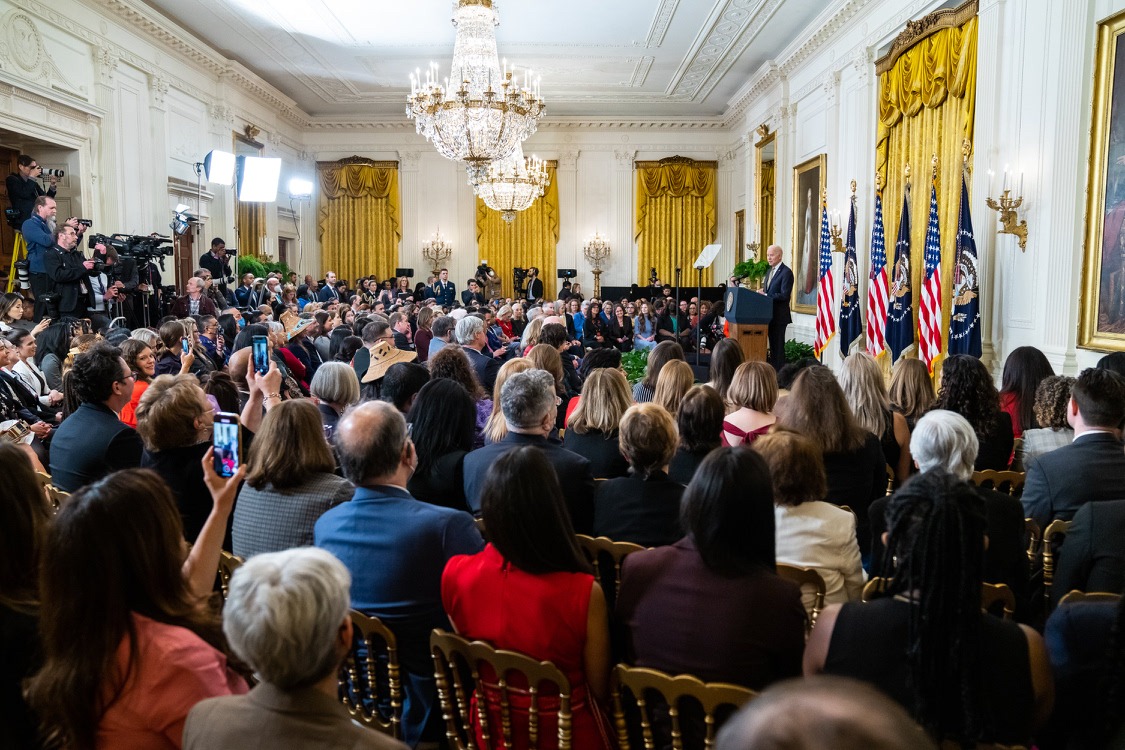 A new Monmouth poll finds 77% of Americans endorse the CDC relaxing its face mask and social distancing recommendations in areas with low Covid rates. At the same time, support for requiring people to show proof of vaccination in order to work in an office or around people has held steady – 44% now and 43% in January.

A new AP-NORC poll finds 56% of Americans believe President Biden’s response to the invasion has not been tough enough, while 55% said they believed the U.S. should sanction Russia “as effectively as possible,” even if it hurts the U.S. economy.

The same poll finds “close to half of Americans say they are very concerned that Russia would directly target the U.S. with nuclear weapons, and an additional 3 in 10 are somewhat concerned about that.”

“Roughly 9 in 10 Americans are at least somewhat concerned that Putin might use a nuclear weapon against Ukraine, including about 6 in 10 who are very concerned.”

Rep. Madison Cawthorn (R-NC) said that he’s experienced “the sexual perversion that goes on in Washington.”

Cawthorn also claimed that lawmakers have done cocaine in front of him.

CNN ranks the 10 Senate seats most likely to flip:

New York Times: “That Ms. Stefanik would be hosting this particular party seemed fitting. A once-moderate Republican who worked in President George W. Bush’s White House and was a protégé of former Speaker Paul Ryan, she is the embodiment of the rapid shift in the Republican Party. In just a few short years, she has morphed from the conservative mainstream into an unlikely star of the MAGA universe and a die-hard Trump loyalist.”

“In an interview on the sidelines of the party retreat, her reinvention was on vivid display. Ms. Stefanik repeated Mr. Trump’s lies about the 2020 election being stolen and refused to acknowledge Mr. Biden as the legitimately elected president.

Lauren Harper: “Every Democrat fantasizes about seeing Marjorie Taylor Greene go down in flames. But the reality is that she won her district by a landslide in 2020 and is on track to do the same in 2022. Trump won in her newly-drawn district with 68.1 percent of the vote in 2020—a bigger vote share than he got in the very red states such as Idaho (63.9 percent), Mississippi (57.6 percent), or Nebraska (58.5 percent).”

“There is no Democratic pathway to victory in Greene’s district. Even for a high roller like Flowers. This fact has not stopped Democratic donors from giving Flowers more than $4.6 million in 2021 alone (87 percent via small-dollar donations of less than $200). That’s a haul exceeded by only a handful of other campaigns.”

“It was also an order of magnitude larger than Democratic challengers raised in seats that are winnable.”

NE-01: Republican Rep. Jeff Fortenberry said Saturday that he would resign from Congress on March 31, an announcement that came two days after he was convicted of concealing illegal campaign funds he received from a foreign national—Lebanese-Nigerian billionaire Gilbert Chagoury—and for lying to federal investigators about those funds. The nine-term congressman, who plans to appeal, is scheduled to be sentenced in June, and each of the three charges he was found guilty of carries a maximum of five years in prison.

Fortenberry had been seeking re-election to Nebraska’s 1st Congressional District, a constituency in the Lincoln area that Donald Trump would have carried 54-43, and because candidate filing closed weeks ago, it’s too late for anyone else to run. State Sen. Mike Flood, a former speaker of the state’s unicameral legislature who is backed by Gov. Pete Ricketts and former Gov. Dave Heineman, should now have no trouble winning the May GOP primary against Fortenberry, whose name will remain on the ballot. Democrats, meanwhile, are fielding state Sen. Patty Pansing Brooks.

Nebraska Secretary of State Bob Evnen also says that a special election must take place before the end of June for the final months of Fortenberry’s current term. That contest would take place using the congressional map that has been in place since 2012, and Trump won the existing 1st District 56-41. State party leaders, rather than primary voters, will choose the nominees for the special election.

Fortenberry had always decisively won re-election, and he appeared to be on track for another easy victory until he was indicted in October. Prosecutors argued that Chagoury had used straw donors to illegally funnel $180,000 to four different Republican candidates, including $30,000 to Fortenberry’s 2016 campaign; Chagoury, who became close to Fortenberry because of their mutual support for oppressed Christians in the Middle East, agreed to pay a $1.8 million fine in 2021 but avoided jail time.

The Bulwark: “Two motivations appear to lead the pack of emotional wolves that maraud Trump’s brain. First, as his niece Mary Trump has said, he owns ‘the most colossal and fragile ego on the planet.’ His frail self-image fears external confirmation that he’s a loser. Restoration would represent redemption.”

“Second, and likely more important, is his fear of federal prosecution. The presidency brings immunity from it under Justice Department memos… Although Attorney General Merrick Garland has appeared reluctant to prosecute Trump, he remains exposed to federal prosecution on a variety of charges—including charges related to Jan. 6th—absent a return to the White House.”

PA-12: Attorney Steve Irwin has earned the backing of the Laborers’ District Council of Western PA for the May Democratic primary.

GA-14: A group of voters in northwest Georgia’s 14th Congressional District have filed a challenge to Republican Rep. Marjorie Taylor Greene’s candidacy with the secretary of state’s office, arguing that she’s ineligible to hold office under the 14th Amendment because she “voluntarily aided and engaged in an insurrection to obstruct the peaceful transfer of presidential power” on Jan. 6. The complaint is similar to one targeting North Carolina Rep. Madison Cawthorn and says that Republican Secretary of State Brad Raffensperger must call a hearing to determine Greene’s eligibility.

Said Timken: “As a mom and former college athlete, I know how important women’s sports are. They teach our girls to be winners. But the Biden Democrats want to force our daughters to compete against men in the pool and on the court.”

Former President Donald Trump boasted Sunday that a “massive” crowd turned out to see him in Georgia, even as two experienced journalists on the scene said the rally was the “smallest” they had seen in years, the HuffPost reports.

Said Greg Bluestein, a political reporter at the Atlanta Journal-Constitution: “I’ve covered more than two dozen Trump rallies around the nation. This is the smallest crowd I’ve seen at a rally of his in Georgia since he won the 2016 election.”

Politico: “As Trump teases a 2024 run, his continued contact with white evangelical Christian leaders in phone calls and regular meetings at Mar-a-Lago is evidence that he is committed to keeping the coalition that first delivered him to the White House intact.”

“It’s a group that Trump recognized early on would be critical for his political trajectory — not just because a cosmopolitan, thrice married, former Playboy cover star who curses and throws out cruel insults to his political enemies lacked a certain appeal to that crowd, but because that crowd is the bedrock of modern Republican politics. Since leaving office, that relationship hasn’t changed.”

“Federal prosecutors and the FBI are investigating whether Lt. Gov. Brian Benjamin (D) of New York played a role in an effort to funnel fraudulent contributions to his unsuccessful 2021 campaign for New York City comptroller, and have issued subpoenas to his campaign advisers and the State Senate,” the New York Times reports.

Politico reports that “spats between governors and state legislators have brought map-making to a standstill in the final four states still without new congressional lines for the 2022 elections.”

“With filing deadlines looming, 44 House seats are still outstanding in Louisiana, New Hampshire, Missouri and, most importantly, Florida, which has 28 districts all by itself.”

Near the end of Trump’s rally for ex-senator-turned-Georgia gubernatorial candidate David Perdue on Saturday, the ex-president told Perdue, “I hope, David, you’re going to be the governor, or I just wasted a helluva lot a time tonight.”

Perdue isn’t doing so hot right now: Incumbent Gov. Brian Kemp (R), one of Trump’s top targets on his post-2020 election revenge crusade, has been consistently leading the polls in the GOP primary. Meanwhile, Perdue lagged behind Kemp by more than 10 points in Fox’s poll on March 8.

Trump’s warning came several days after he unceremoniously dumped Alabama Senate candidate Mo Brooks, whom Trump bashed for not sufficiently lying about the 2020 election enough. More worrying for Perdue, Trump had also privately complained about Brooks’ campaign falling behind his opponents in fundraising and polling.