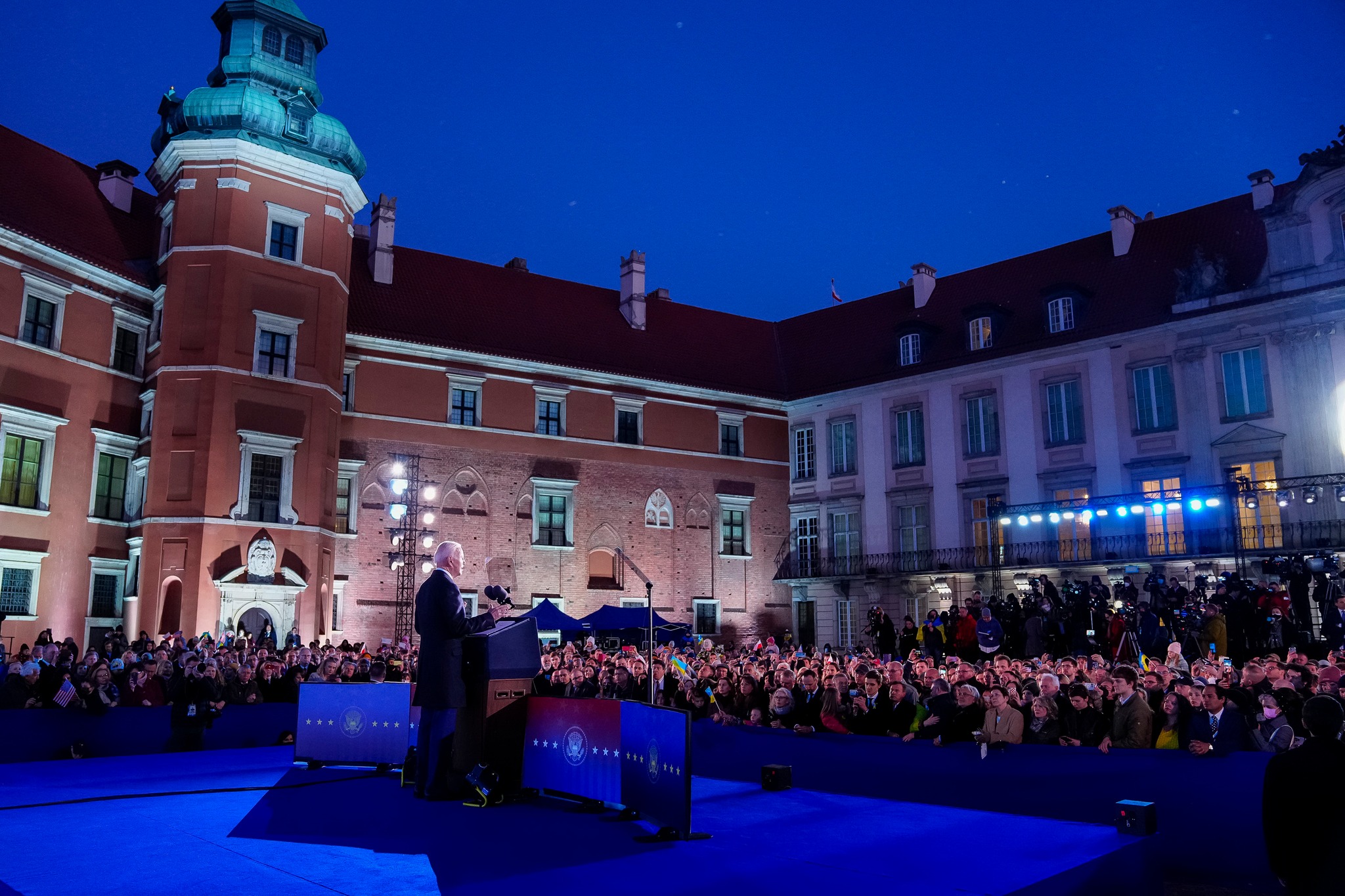 Said Secretary of State Antony Blinken: “We do not have a strategy of regime change in Russia, or anywhere else, for that matter. In this case, as in any case, it’s up to the people of the country in question, it’s up to the Russian people.”

Richard Haass: “The comments by President Biden made a difficult situation more difficult and a dangerous situation more dangerous. That is obvious. Less obvious is how to undo the damage, but I suggest his chief aides reach their counterparts and make clear US prepared to deal with this Russian government.”

Washington Post: “White House officials were adamant the remark was not a sign of a policy change, but they did concede it was just the latest example of Biden’s penchant for stumbling off message. And like many of his unintended comments, they came at the end of his speech as he ad-libbed and veered from the carefully crafted text on the teleprompter.”

Matthew Yglesias: “I think Biden should do more off-script gaffes on domestic politics where his old man instincts are closer to the electorate than his staff. But when addressing great power conflict you want to stick to the prepared text.”

Said Trump: “The smartest one gets to the top. That didn’t work so well recently in our country.”

He added: “But they ask me, ‘Is Putin smart?’ Yes, Putin was smart. And I actually thought he was going to be negotiating. I said, ‘That’s a hell of a way to negotiate, put 200,000 soldiers on the border.’ … I think he made a big mistake, what he’s done to so many people, but that was a big mistake. But it looked like a great negotiation.”

So who is more in tune with the American and World Opinion: Biden, who wants Putin gone, or Trump, who never misses a chance to fellate Putin?

“The war in Ukraine is proving extraordinarily lethal for Russian generals, the gray men bedecked in service medals, who are being aggressively targeted by Ukrainian forces and killed at a rate not seen since World War II,” the Washington Post reports.

“Ukrainian officials say their forces have killed seven generals on the battlefield, felled by snipers, close combat and bombings.”

“Ukrainian President Volodymyr Zelensky accused the West of lacking courage as his country fights to stave off Russia’s invasion, making an exasperated plea for fighter jets and tanks to sustain a defense in a conflict that has ground into a war of attrition,” the AP reports.

“Speaking after President Joe Biden met with senior Ukrainian officials in Poland on Saturday, Zelensky lashed out at the West’s ‘ping-pong about who and how should hand over jets and other defensive weapons to us’ while Russian missile attacks kill and trap civilians.”

“The nation’s courts are facing overwhelming case backlogs because of the Covid-19 pandemic and it could take years for the legal system to dig out,” the Wall Street Journal reports.

“Tens of thousands of legal cases ranging from minor thefts to civil disputes to murder are stuck in limbo in state courts around the country, a situation that has left some defendants waiting in jail and strained prosecutors’ and defense attorneys’ ability to do their jobs.”

A Florida restaurant canceled a party for the Capitol rioter who was photographed with Speaker Nancy Pelosi’s lectern and was sentenced to 75 days in prison, WFLA reports.  Adam Johnson posted to Facebook: “Come help me celebrate my last Friday of freedom before I go to prison for the lamest charge in history.”

“President Jair Bolsonaro narrowed the gap with former president Luiz Inacio Lula da Silva in Brazil’s presidential race as the economic outlook brightens and the government boosts cash handouts to the poor,” Bloomberg reports.  “Lula would win 43% in the first-round of the October vote, down from 48% in the previous tally taken in December… Bolsonaro would get 26%, up from 22% previously.”

“Microplastic pollution has been detected in human blood for the first time, with scientists finding the tiny particles in almost 80% of the people tested,” The Guardian reports.  “The discovery shows the particles can travel around the body and may lodge in organs. The impact on health is as yet unknown. But researchers are concerned as microplastics cause damage to human cells in the laboratory and air pollution particles are already known to enter the body and cause millions of early deaths a year.”

Bloomberg: “House staffers left their jobs last year at the highest rate since at least 2001, according to Legistorm, which tracks staff and member data and salaries. House staff exits have gradually increased since 2009, according to the analysis, but they jumped 55% compared with 2020 in a year that included the Jan. 6 Capitol insurrection and Covid-19 complications.”

Robert Foster (R), a former Mississippi House lawmaker who lost a 2019 bid for governor, called for the execution of those who support the rights of transgender people, the Mississippi Free Press reports.

Said Foster: “The law should be changed so that anyone trying to sexually groom children and/or advocating to put men pretending to be women in locker rooms and bathrooms with young women should receive the death penalty by firing squad.”

“Women in Afghanistan are struggling with new Taliban rules requiring them to be accompanied by a male relative, one in a series of measures that they say threaten to squeeze them out of public and professional life,” the Wall Street Journal reports.

“The official new rules don’t bar women from traveling alone near their homes… However, women across the country say guardianship rules are being imposed on a far wider scale, and include needing a male relative to join them for basic tasks such as entering government buildings, seeing a doctor or catching a taxi.”

Axios: “At least 22 governors have proposed cutting or suspending gas taxes, seven states are considering measures to alleviate food costs, and about a dozen are maneuvering to reduce income taxes.”

“States are flush with cash after reaping a windfall from the federal government in the early going of the pandemic, when federal stimulus dollars were flowing. So they’ve got some money to spend.”

“Amid pushback from industry groups and lawmakers in both parties, federal energy regulators on Thursday scaled back plans to consider how natural gas projects affect climate change and environmental justice,” the AP reports.

“Another record-breaking surge of migrants may attempt to cross the US-Mexico border this spring, alarming officials who are now rushing to build more facilities and lining up prison buses to help accommodate the new arrivals,” CNN reports.

“An ice shelf the size of New York City has collapsed in East Antarctica, an area long thought to be stable and not hit much by climate change,” the AP reports.