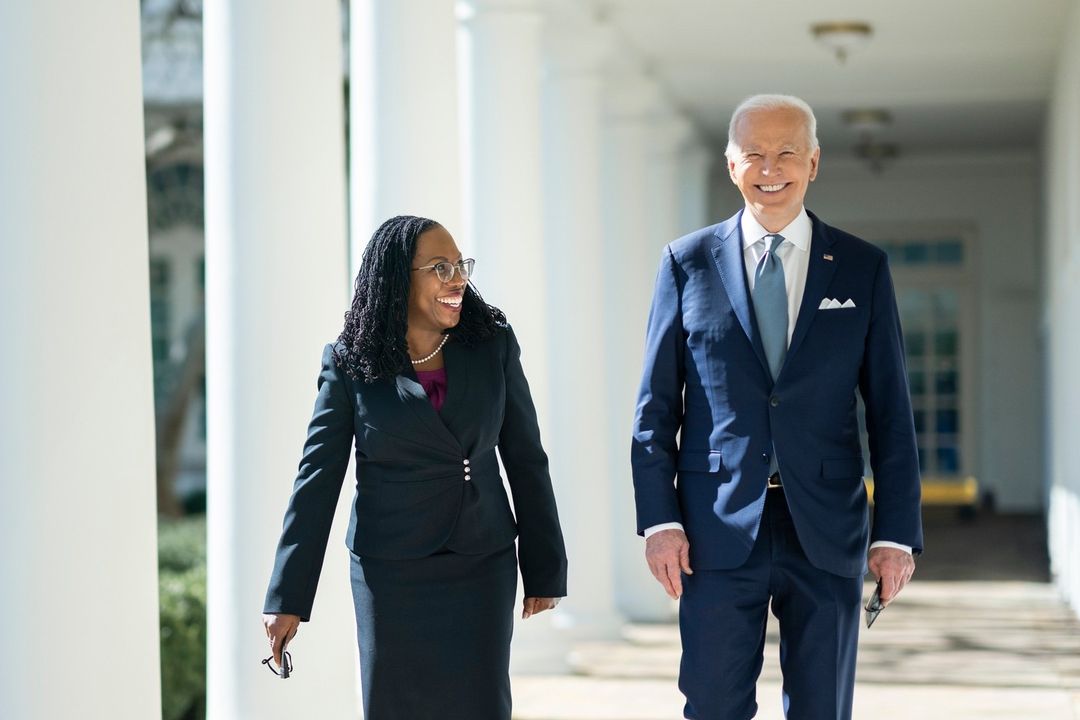 “About 7 in 10 Americans say the nation’s economy is in bad shape, and close to two-thirds disapprove of Biden’s handling of the economy… In addition, Americans are more likely to say his policies have hurt the economy than helped it.”

“Yet less than half say the jump in gas prices is Biden’s fault, a reflection of how the country is processing Russian President Vladimir Putin’s invasion of Ukraine and the resulting increase in oil costs.”

Wall Street Journal: “Nationwide, the Wharton School of the University of Pennsylvania estimates that last year’s inflation required the average household to spend around $3,500 more to achieve the same level of consumption of goods and services as in 2019 or 2020.”

“Democrats once expected a thriving post-Covid economy to be their big strength heading into the midterms. Instead, the path to Election Day is littered with land mines for a party struggling to avoid annihilation at the ballot box,” Politico reports.

“President Biden and Democratic lawmakers face the threat of spiraling inflation, driven by soaring food, energy and lodging costs. The Federal Reserve is embarking on an aggressive series of interest rate hikes — as many as seven this year alone — to curb rising prices and slow the economy. The war in Ukraine is further disturbing supply chains, roiling commodities markets and fueling uncertainty. Add in a new wave of Covid lockdowns in China that could bring more disruptions to trade and you’ve got a toxic mix.”

Karl Rove: “Mr. Biden and congressional Democrats have made mistakes in policy, message, ideology and tone over the past 14 months. They’ll pay a fearsome price later this year.”

Daily Beast: “If the worst thing Rep. Madison Cawthorn (R-NC) did this month was call Ukraine’s President “a thug,” or get caught speeding multiple times with a revoked license, or accuse Speaker Nancy Pelosi of being an alcoholic, the 26-year-old MAGA-influencer would probably be just fine in his re-election bid.”

“But Cawthorn did something far worse, at least for his own political prospects, and it may cost him his seat: He left his constituents—and then was forced to return to them, hat in hand, after the courts predictably struck down the new map on Feb. 23.”

“The about-face opened up a more damaging line of attack than anything Cawthorn has said or done. It showed, at least briefly, that he was less interested in representing the voters who first elected him than he was in just being in Congress.”

Said Ocasio-Cortez: “We need to acknowledge that this isn’t just about middle of the road, increasingly narrow band of independent voters.”

She added: “But, this is really about the collapse of support among young people, among Democratic base, feeling like they worked overtime to get this president elected and they aren’t necessarily being seen.”

Consulting fees for campaigns pursuing an endorsement from former President Donald Trump can run in the $10,000 per month range, the Washington Post reports.

Fort Worth Star-Telegram: “In Tarrant County alone, 815 ballots were rejected over the ID rule — three in the Republican primary and 812 in the Democratic primary. Those interviewed for this story said they could not provide a definitive reason for the discrepancy between the parties.”

New Yorker: “Whatever hope remains for the Georgia congresswoman’s many detractors seems to depend on either a new lawsuit or a candidate who’s been called ‘Marjorie with a brain.’”

MISSOURI 1ST CD. Republican state Senate President Pro Tem Dave Schatz told the St. Louis Post-Dispatch earlier this month that Democratic state Sen. Steven Roberts wants lawmakers to modify the boundaries of the safely blue 1st District to strengthen his chances for a potential primary campaign against Rep. Cori Bush. Roberts rejected Schatz’s claim about his interest in shaping redistricting, though he did not deny he was considering a campaign against the high-profile freshman. “Is this on the record or off the record?” he asked a reporter, and when he was informed he was on the record, Roberts simply said he was focused “on my legislative duties.”

Roberts appeared in the news again on Monday when The Intercept reported that someone with an IP address in the Missouri Office of Administration edited Roberts’ Wikipedia page to delete a section describing how he’d been accused of sexual assault by two different women in 2015 and 2017, though he was never charged. A spokesperson for Roberts denied any knowledge of the edits and also deflected a question about a possible campaign against Bush. Missouri’s candidate filing deadline is still set for March 29 even though the GOP-run legislature hasn’t yet passed a new congressional map.

FLORIDA 7TH CD. Longtime congressional aide Rusty Roberts announced this week that he was entering the Republican primary to succeed retiring Democratic Rep. Stephanie Murphy. Roberts previously served as chief of staff for John Mica, the Styrofoam-obsessed Republican whom Murphy unseated in 2016. (Politico wrote during that campaign that Mica “obsessively hordes throwaway coffee cups in his office and home, insisting that his companions reuse the same paper or Styrofoam carries because ‘it’s recyclable!'”)

NEW JERSEY 11TH CD. For the second cycle in a row, former Kinnelon Council President Larry Casha has dropped out of the Republican primary to face Democratic incumbent Mikie Sherrill.

COLORADO 8TH CD. While Adams County Commissioner Chaz Tedesco initially sought to collect signatures to qualify for the June Democratic primary ballot for this new seat, he didn’t end up turning in enough petitions before last week’s deadline. Tedesco will instead seek to advance by competing at the April 5 party convention, where he’ll need to win the support of at least 30% of the delegates in order to keep his candidacy alive.

The other major Democratic candidate is state Rep. Yadira Caraveo, who did turn in the requisite number of petitions. She’s also competing for the party endorsement next month, but she’ll make it to the primary ballot as long as she wins at least 10% of the delegates.

TENNESSEE 5TH CD. Maury County Mayor Andy Ogles has announced that he’s joining the August Republican primary for the open 5th District, which Republicans recently transformed from blue to red by cracking apart the city of Nashville. Ogles is a former state director for the Koch network’s Americans for Prosperity, and he launched a primary bid in 2017 against Sen. Bob Corker days before the incumbent decided to retire. Ogles, though, attracted little attention in the new open seat race from the Kochs or anyone else, and he soon dropped out and launched a successful bid for Maury County mayor.

Ogles, who established himself as a loud opponent of Gov. Bill Lee’s pandemic measures, responded to Lee’s summer declaration that school districts could decide for themselves if a mask mandate would be required in elementary schools by calling for the legislature to hold a special session to address his “continued abuses of power.” Ogles also didn’t rule out a primary campaign against Lee before the new congressional maps were unveiled, but he soon shifted his focus to the 5th District.

Ortagus gave her critics some fresh material last month when, during an appearance on Michael Patrick Leahy’s conservative radio show, she bombed the host’s quiz about the new district and state. Among other things, Ortagus couldn’t answer when asked which “three interstate highways” are in the 5th, the names of the four living former Republican governors (she only got Lee’s predecessor, Bill Haslam), and the identity of “[o]ne of the most famous NASCAR drivers living today [who] lives in the 5th District and has a large auto dealership in Franklin.” (The answer is Darrell Waltrip.)

Each chamber of the state’s GOP-dominated legislature has also passed a bill that would impose a three-year residency requirement on congressional candidates, and while its state House sponsor denied it had anything to do with any specific contender, observers were quick to note that it would keep Ortagus off the ballot. However, while the Senate version would take effect this cycle, the House bill wouldn’t come into force this year. It likely wouldn’t matter what the legislature ends up agreeing to, though, because of a 1995 Supreme Court decision that ruled that states cannot add further qualifications to candidates for Congress that aren’t in the U.S. Constitution.

VERMONT AT LARGE CD. Sianay Chase Clifford, who is a former aide to Massachusetts Rep. Ayanna Pressley, announced last week that she was joining the August Democratic primary for Vermont’s open House seat and campaigning as “a real progressive option.” Chase Clifford, who is 27, moved to the Bay State for college, and she returned to Vermont during the pandemic. The candidate, whose mother is from Liberia, would be the first Black person to represent the state in Congress.

NEW JERSEY 5TH CD. Marine veteran Nick De Gregorio on Wednesday decisively defeated 2020 nominee Frank Pallotta at a party convention to win the important organization line in Bergen County, which is home to 82% of the new 5th District’s residents, for the June Republican primary to face Democratic incumbent Josh Gottheimer. This seat would have supported Biden 56-43.

Pallotta, for his part, has the party endorsement in Passaic County, which forms another 7% of the constituency. The balance is in Sussex County, which has no organization line: However, Pallotta is running on the same slate as Sheriff Michael Strada and other notable politicians.

SOUTH CAROLINA 1ST CD. Katie Arrington (R), a Trump-backed South Carolina congressional candidate, lashed out at the former president’s chief of staff in a series of text messages this week, where she twice called Mick Mulvaney a “piece of shit” after he told a national news outlet she was “not the best candidate by any stretch of the imagination,” The State reports.

NORTH CAROLINA 13TH CD. In his first ad for the May Democratic primary, state Sen. Wiley Nickel tells the audience that “before I served my community in the state Senate, I worked for President Obama during some of his toughest fights. He taught me never to run away when people are counting on you to do the right thing.” Nickel continues, “So, when Republicans targeted black and brown voters with a bill that ‘would lead to thousands of legitimate votes being thrown in the trash,’ I stood firm and blocked it from becoming law.”

Law student Bo Hines uses his first spot for the May Republican primary to talk about his time as a college football player and to inform the viewer that he’s Donald Trump’s endorsed candidate. The spot features a montage of Hines jumping rope, lifting weights, and, in one weird moment at the 12-second mark, apparently talking to himself in the mirror.

MICHIGAN 10TH CD. Even though John James has no serious Republican primary opposition in sight, the two-time Senate nominee is running a commercial faulting the Biden administration’s “weakness” on foreign policy and touting his own military service.

TEXAS 34TH CD. Rep. Filemon Vela, a Democrat who was already retiring from Congress, announced Thursday that he would resign in the next few weeks in order to take a job at the lobbying and law firm Akin Gump. Vela’s early departure will set off a special election to succeed him within the current boundaries of the 34th District, a Rio Grande Valley constituency that Biden won 52-48, but it remains to be seen if the all-party primary would take place before Texas’ regular November general election.

To make things even more complicated, the Democratic nominee for the new 34th, a redrawn seat that would have supported Biden 57-42, is Vicente Gonzalez, who represents the existing 15th District. Gonzalez, who decided to run to succeed Vela after Republicans made the 15th more conservative, quickly said, “I intend to represent present-day TX-15 until the end of my term,” which would take him out of contention for the special. However, Republican Mayra Flores, who will face Gonzalez in November for the new 34th, said she “will absolutely be a candidate in any special election.”