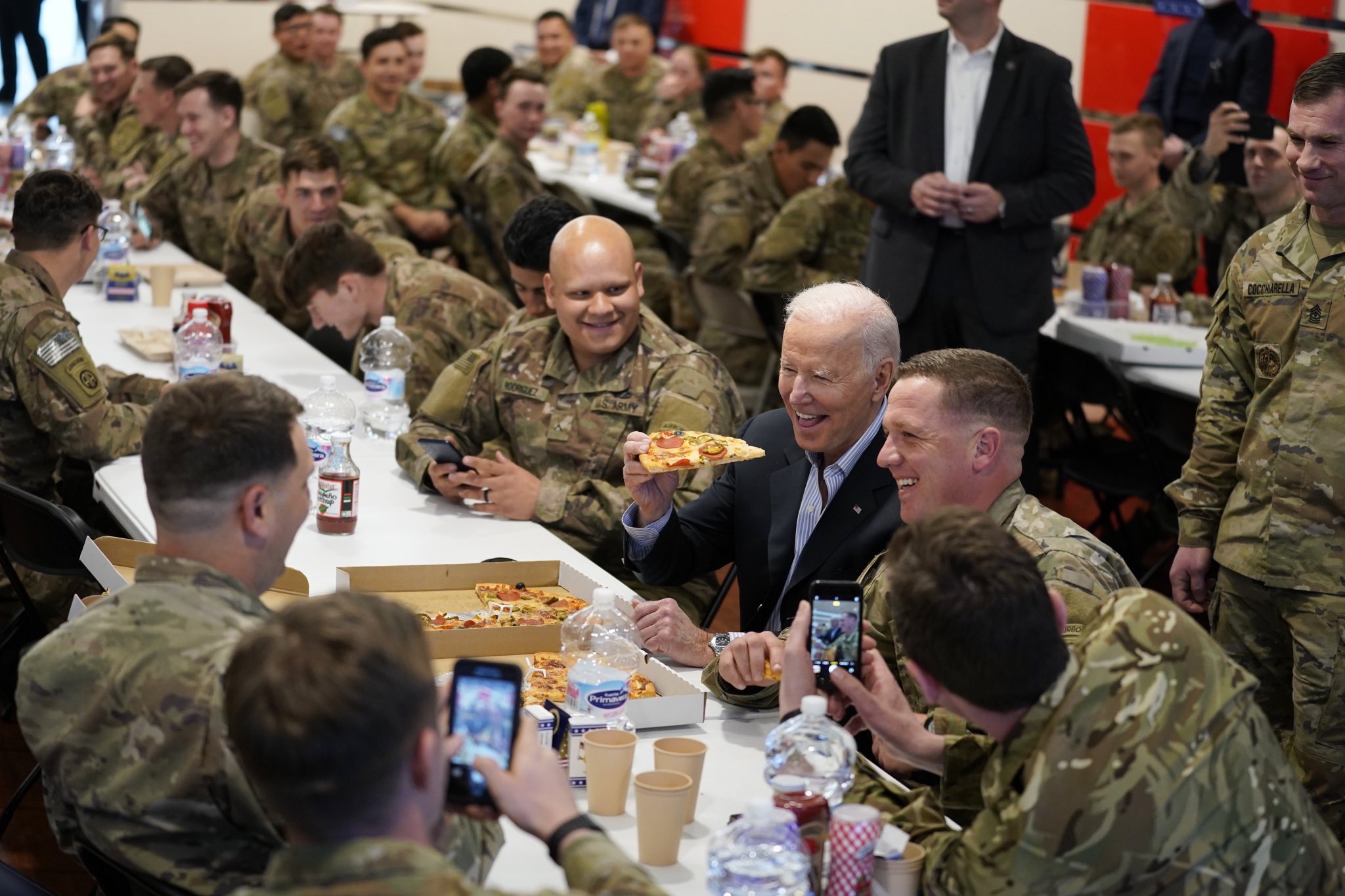 A new NRCC poll in 77 competitive House districts which shows Republicans lead the generic ballot by 4 points. Biden won these battleground seats by an average of 5.5 points.   President Biden’s net approval rating in these districts is -15 percentage points.

Playbook: “Take the results with a grain of salt, obviously: The numbers are committee internals. Also keep in mind that this is too small a sample to tell us about individual districts, but in aggregate, it comprises what the NRCC sees as a representative sample of the seats that will be up for grabs in November.”

House Minority Leader Kevin McCarthy (R-CA) “predicted that Republicans will win control of the House in November — and that they won’t just scrape by with the bare minimum number of seats they need,” The Hill reports.  Said McCarthy: “We’re going to win the majority, and it’s not going to be a five-seat majority.”

Vanity Fair reports on a “behind-the-scenes Democratic conversation” which is becoming increasingly active and anxious: “If Biden does not run, whether for political or personal reasons, what then?”

“Heading into the 2022 midterm elections, Republicans have been riding a wave of positive press about their gains among Hispanic voters as Democrats fret about hemorrhaging support from the fast-growing demographic,” NBC News reports.  “But while Democrats clearly have a problem, the GOP’s growing support among Latinos is less dramatic than some headlines suggest, according to a new poll conducted by a top Latino Democratic pollster and underwritten by a conservative Spanish-language network.”

“About 48 percent of Hispanics nationwide consider themselves Democrats, and only 23 percent identify as Republican, the poll found.”

Alan Abramowitz: “One key question in American politics is the trajectory of Latino voters. Donald Trump performed better in 2020 with Latino voters than he did in 2016, particularly in places like South Texas and South Florida.”

“However, an analysis of the longer-term trend in Latino presidential voting shows that this growing voting bloc is not necessarily trending one way or the other.”

“Former president Donald Trump has slowed his efforts to shape the nation’s most competitive Republican primaries, holding back endorsements in some of the biggest Senate races and publicly abandoning his support for the struggling Senate campaign of Rep. Mo Brooks,” the Washington Post reports.

“But the president’s decision to temporarily delay endorsements, in the face of struggles by several of those he earlier sided with, has served only to increase efforts among Republican candidates, former advisers and political consultants to court his favor.”

John Harris: “Trump has moved from being the beneficiary of America’s instinctual suspicion that most politicians are phonies who don’t really believe a thing they say, to being the enforcer against politicians who are insufficiently phony in professing blind devotion to him.”

“One suspects that Trump himself does not realize how far he has drifted from the original source of his appeal as someone who is not connected to a reigning power structure and may lie and even cheat but does not traffic in the usual political B.S.”

“Trump makes so much noise, and instills so much fear in Republican politicians, that it can be hard to see the deterioration that is taking place in his political foundation.”

Benjy Sarlin: “It’s a weird moment where Trump simultaneously 1) has never looked weaker, 2) is still the frontrunner for the nomination, and 3) cannot be making it clearer his one guiding issue is re-running 2020 only now rigged in his favor at the state level.”

New York Times: “As war has raged, the Kremlin’s talking points and some right-wing discourse in the United States — fueled by those on the far right — have coalesced. On social media, podcasts and television, falsehoods about the invasion of Ukraine have flowed both ways, with Americans amplifying lies from Russians and the Kremlin spreading fabrications that festered in American forums online.”

“By reinforcing and feeding each other’s messaging, some right-wing Americans have given credibility to Russia’s assertions and vice versa. Together, they have created an alternate reality, recasting the Western bloc of allies as provokers, blunderers and liars, which has bolstered Mr. Putin.”

Roll Call: “Republican senators have a tough job this week as Supreme Court nominee Ketanji Brown Jackson faces questioning from the Judiciary Committee. In many ways, how the GOP side of the dais decides to treat the first Black woman ever nominated to the high court is the opening salvo of what promises to be a bruising midterm election cycle.”

“They must, all at once, be tough on a liberal federal appellate judge to placate and excite their base ahead of November’s midterm elections. But they also risk further alienating suburban white women and other swing voters who ditched them in 2020 to give Joe Biden the White House and Democrats control of both chambers of Congress.”

The Hill: Republicans to roll dice by grilling Jackson over child-pornography sentencing decisions.

GEORGIA GOVERNOR. The RGA has launched a $350,000 ad buy that portrays Democrat Stacey Abrams as someone devoted to traveling the world in order to boost herself, while it praises Republican Gov. Brian Kemp as a “leader here at home working hard, solving problems, getting results.” The spot does not mention former Sen. David Perdue, Kemp’s main opponent in the May primary.

OREGON GOVERNOR. Former Gov. John Kitzhaber, who resigned early in his fourth term in 2015, has endorsed state Treasurer Tobias Read in the May Democratic primary.

Oregon Public Broadcasting’s Dirk VanderHart notes that Reed’s intra-party rival, former state House Speaker Tina Kotek, was one of the legislative leaders who pressured Kitzhaber to quit seven years ago after he was accused of being complicit in allowing his fiancée, Cylvia Hayes, to use her access to the governor for financial gain; federal prosecutors ultimately announced, however, that they wouldn’t charge either Kitzhaber or Hayes with any wrongdoing. Kitzhaber has reemerged in recent years as a vocal health policy advocate, and Willamette Week’s Nigel Jaquiss says he “retains a core following among many Democrats.”

The Club also takes a look at the race for governor, where it has yet to take sides: WPA shows Clark County Sheriff Joe Lombardo leading former Sen. Dean Heller 28-22, with North Las Vegas Mayor John Lee at 13%. A recent PPP survey for the Democratic Governors Association had Lombardo ahead with a similar 26%, while Heller and Lee tied with 13% each.

RHODE ISLAND GOVERNOR. Businesswoman Ashley Kalus on Tuesday announced that she would seek the Republican nomination to take on Democratic Gov. Dan McKee, a move that at last gives Team Red a notable contender in this year’s race for governor. The newly minted candidate, who runs a company that describes itself as “a medical practice focused on COVID testing, vaccination, and medical care run by physicians,” also said she’d engage in some self-funding, explaining, “I am going to raise money and I’m also going to put my own money into the campaign, and I’ll do whatever it takes to be competitive.”

Kalus has touted herself as a “political outsider,” though that’s only really true as far as Rhode Island politics is concerned: She worked on Republican Bruce Rauner’s successful 2014 campaign for governor of Illinois and went on to serve as his director of public engagement. She later relocated to Florida, where she cast a ballot in 2020.

It’s not clear when exactly Kalus moved to Rhode Island, though she bought a $770,000 home there last May and registered to vote in January. Kalus, though, tried to argue in her announcement that her love for the Ocean State goes back further, saying, “My husband, Jeff, and I originally hoped to start our life and family together in Providence, but the financial crisis hit and opportunity disappeared. With a quarter of a million dollars in student loan debt, we had to leave for better opportunities.” Kalus, who described herself as “pro-life,” also was asked Tuesday which Republican office-holder she likes the most and selected Florida’s far-right governor, Ron DeSantis.

NORTH CAROLINA U.S. SENATOR. Conservative Outsider PAC, an organization affiliated with Rep. Ted Budd’s allies at the Club for Growth, is spending almost $1 million on a TV ad campaign targeting former Gov. Pat McCrory ahead of the May Republican primary. The spot portrays McCrory as weak on immigration enforcement by making use of a 2001 clip of the then-Charlotte mayor saying, “We do have illegal immigrants, they are contributing greatly to our workforce and frankly are not breaking the law.”

Budd, aka the far-right congressman running for Senate that Trump still backs, is running a spot for the May primary based around his support for finishing Trump’s border wall.

OKLAHOMA U.S. SENATOR B. The Oklahoma Supreme Court ruled on Thursday that it did not have jurisdiction to hear a lawsuit brought by attorney Stephen Jones challenging Gov. Kevin Stitt’s decision to call a special election for Jim Inhofe’s Senate seat this fall, following oral arguments a day earlier. Jones said in response that he’s “looking at federal court options,” though it’s also possible he could file a new case with a lower state court since the Supreme Court specifically held that it was not the proper forum to initiate this lawsuit in (or, in legal parlance, that it lacked “original jurisdiction”).

“Scott Pruitt, who ran the Environmental Protection Agency under Donald Trump before resigning under a crush of ethics scandals, called two major Republican donors while weighing a run for Senate in Oklahoma in recent weeks,” the Washington Post reports.

MARYLAND GOVEROR. Former U.S. Secretary of Labor Tom Perez has launched what his campaign says is a six-figure opening buy ahead of the July Democratic primary, and the first spot uses old footage of Barack Obama praising him as “tireless” and “wicked smart,” and commending his record in the cabinet.

Former Prince George’s County Executive Rushern Baker has publicized a GQR internal of the twice-delayed Democratic primary, which is now set for July, that shows him trailing state Comptroller Peter Franchot 23-15; former Democratic National Committee chair Tom Perez and former nonprofit head Wes Moore aren’t far behind with 11% and 10%, respectively. Baker, who was the runner up in the 2018 primary, has released these numbers to argue that he’s the strongest alternative to Franchot.

PENNSYLVANIA U.S. SENATOR. Lt. Gov. John Fetterman’s new commercial for the May Democratic primary touts him as someone who “beat the political machine statewide, reformed the office more than anyone in decades.”

NEW MEXICO GOVERNOR. 2020 Senate nominee Mark Ronchetti’s new commercial for the June GOP primary consists of the longtime TV weatherman promising to “keep violent criminals in jail, secure the border, and take back our schools.” As an image of Democratic incumbent Michelle Lujan Grisham flashes by, Ronchetti declares, “This is our state. It doesn’t belong to the political elites.”

ALASKA AT LARGE CD. Both the Anchorage Daily News and the Alaska Landmine report that Republican state Sen. Josh Revak plans to run in the special election to succeed his one-time boss, the late Rep. Don Young.

Sarah Palin suggested on Fox News that she might “throw her hat in the ring” for the House seat left open by the death of Rep. Don Young (R-AK) because she’s sick of the “vanilla milquetoast namby-pamby wussy pussy stuff” in Congress.

House Minority Leader Kevin McCarthy (R-CA) said he won’t be wading into any other primaries to oust incumbents in his own party, after taking the unprecedented step of endorsing Rep. Liz Cheney’s primary opponent last month, CNN reports.  Said McCarthy: “This is a very special case.”

CHICAGO MAYOR. Allies of Rep. Mike Quigley tell Politico that he’s “close” to deciding if he’ll challenge incumbent Lori Lightfoot, a fellow Democrat, in next year’s officially nonpartisan race to lead Chicago. Quigley is seeking re-election this year to his safely blue 5th District without any serious opposition, and he wouldn’t need to give up his seat in the House unless he won the mayor’s office.