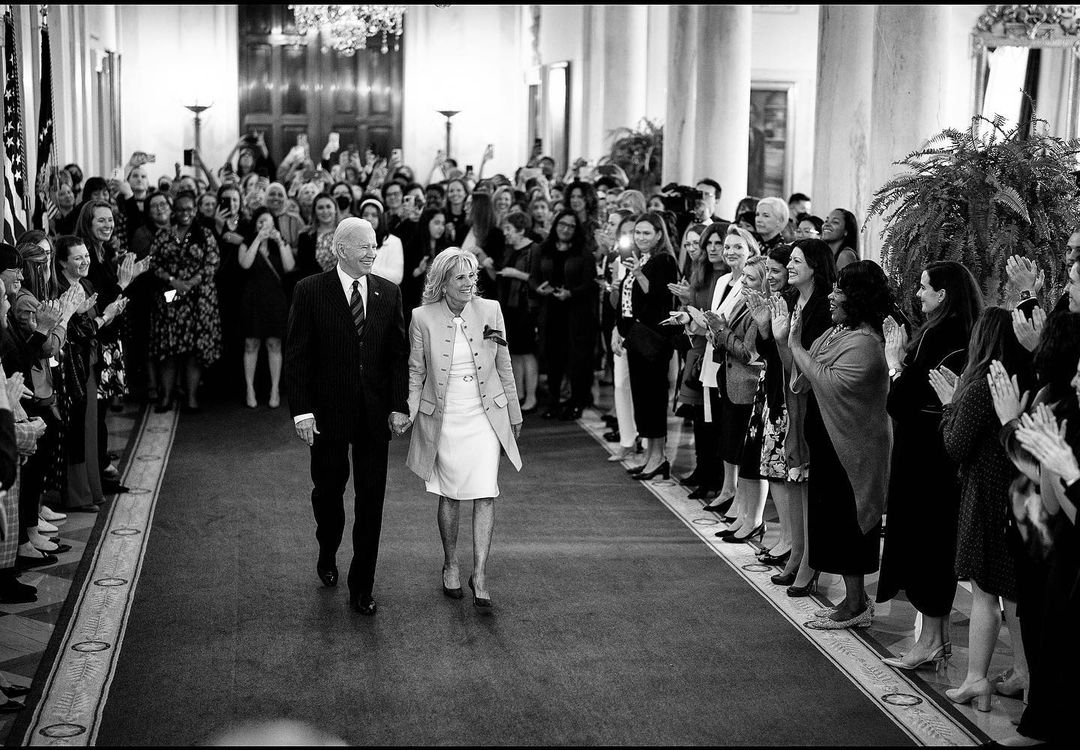 A new Monmouth Poll finds that 55% of Americans said Ketanji Brown Jackson should be confirmed to the Supreme court, while 21% disagreed and 24% had no opinion.

ALASKA AT LARGE CD. Republican Rep. Don Young, who was first elected in 1973 to Alaska’s sole House seat, died Friday at the age of 88 after losing consciousness  while on a flight. Young’s 49-year tenure made him the longest-serving sitting member of either chamber of Congress, as well as the body’s oldest member. Young additionally holds the record for longest-serving Republican in congressional history.

The contest to succeed him this year will mark the first time that the Last Frontier has held an open seat statewide race since 2002, when Democrat Tony Knowles was termed out as governor. It will also be the very first congressional race in the state without an incumbent running since Young himself first was elected in a 1973 special election. Republicans begin as the favorites in a state that Donald Trump carried 53-43.

The special election will likely take place using the new top-four system that voters approved in a 2020 referendum; while state election authorities say they’re still trying to determine the details, the governor’s office says the top-four system will be used. Under the new rules, which will be used in the regularly scheduled 2022 contests, all the candidates will face off on one primary ballot, where contenders will have the option to identify themselves with a party label or be listed as “undeclared” or “nonpartisan.” The top four vote-getters will advance to the general election, where voters will be able to rank their choices using instant-runoff voting.

As for the timing of the special, Matt Acuña Buxton of the Midnight Sun wrote Friday evening right after Young’s death was announced, “State law requires the seat to be filled in a special primary election to be held between 60 and 90 days [after the vacancy occurs] to serve the remainder of Young’s term with a special election to be held 60 days after that. How that interacts with the state’s regular primary, which is 151 days away, isn’t immediately clear.”

NBC News has this interactive graphic to help you navigate your state’s rules on voting in November, including voter registration deadlines and whatever rule changes your state might’ve made since the 2020 election (so you Texans might find the guide to be especially helpful).

“Redistricting has forged a new House map with a small group of Democrats in a perilous place at the center: defending turf that former President Donald Trump carried in 2020,” Politico reports.

“All but four states have finalized their political lines, offering the clearest picture yet of a new House battleground that will force Democrats to protect at least five incumbents in districts Trump carried last election — the most politically hazardous place to be for the midterms. Adding to their burden, another five Democratic members abandoned Trump-won seats and left them open rather than seek reelection there.”

ALABAMA U.S. SENATOR. Rep. Mo Brooks (R-AL) “is calling for Mitch McConnell to be ousted as Senate GOP leader, making him the party’s third major Senate candidate to come out in favor of booting the Kentucky Republican,” Politico  reports. Said Brooks, in a new ad: “America can’t afford a Senate leader who is a weak-kneed, debt junkie, open-border RINO Republican and who, worse yet, sells out America for special interest group cash.”

“Brooks joins two other Republican candidates — Eric Greitens of Missouri and Kelly Tshibaka of Alaska — in pushing for McConnell’s removal. All three are running staunchly anti-establishment campaigns and are aligning themselves with former President Donald Trump, who has repeatedly laced into McConnell over the past year.”

AL-Sen: Former Business Council of Alabama head Katie Boyd Britt’s latest commercial for the May Republican primary stars her husband, former University of Alabama football player Wesley Britt. He tells the audience that, while he’s “knocked heads with the baddest dudes in the SEC and the NFL,” the candidate is actually “the toughest person I’ve ever met.”

FLORIDA 1ST CD. Rep. Matt Gaetz (R-FL) announced Saturday that he will be running for reelection this year, the Northwest Florida Daily News reports.  Said Gaetz: “It’s choose your fighter time. I’m your Florida man. I’m ready to take the fight to Washington and I hope you’ll fight with me.”

It’s been almost exactly a year since the New York Times first reported that the Justice Department was investigating Gaetz over an alleged sexual relationship with a 17-year-old and allegedly paying for her travel across state lines.

NEVADA GOVERNOR. “Las Vegas Councilwoman Michele Fiore, who announced her candidacy for Nevada governor in October with a YouTube ad, changed her mind on Thursday and filed to run for state treasurer instead,” the Las Vegas Review Journal reports.

“A proposed Nevada ballot initiative filed this month by an organization called Common Sense for Uniting America aims to ‘close the great American divide’ by adopting a star rating system for voting,” the Nevada Independent reports.  “Similar to product reviews on Amazon, Max Voting asks voters to express their opinion in a star rating system on a scale from zero to seven that reflects how much they align with a candidate’s stance on the issues. The voting method would award the election to the candidate with the highest average score.”

Politico: “While the RINO term has been employed in some form for more than 100 years, its meaning has shifted over time. In previous decades, a Republican risked getting tagged as a RINO for supporting tax increases, gun control or abortion rights. Today, in a reflection of the GOP’s murkier ideological grounding in the Trump era, it’s a term reserved almost exclusively for lack of fealty to Trump.”

“The evidence of that is explicit. On ads on Facebook last year, one right-wing PAC spent heavily blistering Republicans who voted to impeach Trump or to investigate the insurrection at the Capitol on Jan. 6, labeling them ‘RINO turncoats’ or ‘RINO traitors’ — even ‘RINO communist traitors.’”

“Nearly a third of the top leaders in the nation’s 99 state legislative chambers will quit their posts this year, signaling a wave of turnover that will hand power to a new generation,” The Hill reports.  “At least 30 state House Speakers, Senate presidents and majority leaders have either resigned or said they will retire at the end of their current terms.”

CALIFORNIA 15TH CD. Four Democrats, two Republicans, and a pair of independents are campaigning to succeed retiring Democratic Rep. Jackie Speier in the new 15th District, a seat that’s home to most of San Mateo County as well as a portion of San Francisco. Biden would have carried this constituency 78-20, so there’s a good chance that two Democrats will advance out of the top-two primary.

Team Blue’s three leading contenders are San Mateo County Supervisor David Canepa, Assemblyman Kevin Mullin, and Burlingame Councilmember Emily Beach, while attorney Andrew Watters hasn’t generated much attention yet. Canepa ended 2021 with a clear financial advantage over his opponents, while Mullin has the support of both Speier and the state party.

CALIFORNIA 37TH CD. Democratic Rep. Karen Bass is giving up her seat in Congress to run for mayor of Los Angeles, and five Democrats and one Republican are campaigning to replace her. This constituency, which includes central Los Angeles, would have gone for Biden 86-12, so it would be a surprise if there’s anything other than an all-Democratic general election.

The frontrunner appears to be state Sen. Sydney Kamlager, who represents over 90% of the 37th District in the legislature and has endorsements from Bass, the state Democratic Party, and EMILY’s List. Also running for Team Blue are Culver City Vice Mayor Daniel Lee, whom Kamlager beat in a 69-13 landslide in last year’s special election for the state Senate; and former Los Angeles City Councilwoman Jan Perry, who lost the 2013 race for mayor and a 2018 contest for Los Angeles County supervisor.

CALIFORNIA 42ND CD. Six Democrats, one Republican, and one independent are campaigning for a seat that Biden would have carried 72-26, though the only two Democrats who have attracted much attention are Long Beach Mayor Robert Garcia and Assemblywoman Cristina Garcia, who represents communities to the north (the two do not appear to be related).

Robert Garcia, who would be the first gay Latino to represent California in Congress, is a former Republican who founded the Long Beach Young Republicans in 2005, but he became an independent in 2007 and a Democrat in 2010. Garcia has the backing of two of the state’s most prominent Democrats, Gov. Gavin Newsom and Sen. Alex Padilla, as well as retiring Rep. Alan Lowenthal, who represents 38% of the new seat. (Rep. Lucille Roybal-Allard, who is also not seeking re-election, represents a 48% plurality of the revamped 42nd, but she hasn’t taken sides yet.)

Cristina Garcia is arguing that she has a more dependable progressive record, though her behavior in office has brought her bad press. In 2018, after a staffer accused her of making unwanted advances, two Assembly investigations concluded she had been “overly familiar” with a subordinate. Garcia also acknowledged that she’d called then-Speaker John Pérez, who is gay, a “homo” in 2013. Additionally, after a group of Asian American activists successfully lobbied to defeat legislation to end the state’s ban on affirmative action in college admissions in 2014, she reportedly reacted, “This makes me feel like I want to punch the next Asian person I see in the face.”