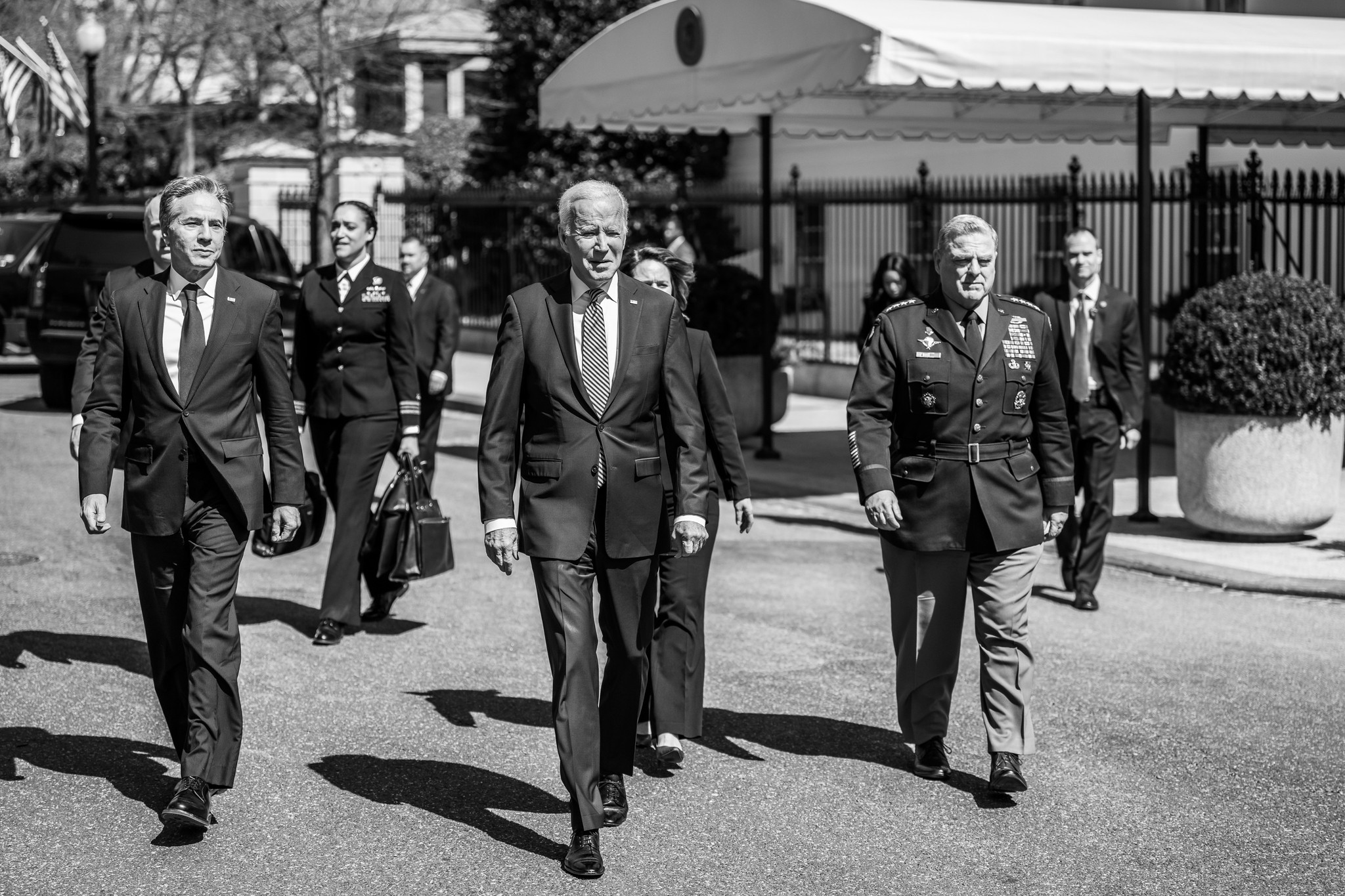 “President Biden and Chinese President Xi Jinping spoke for nearly two hours on Friday in a video call that came as the U.S. tries to convince Beijing to distance itself from Russia’s war in Ukraine,” Axios reports.  Xi told Biden that “conflict and confrontation are not in anyone’s interest,” and that the Ukraine crisis was “not something we want to see.”

In a video call Friday morning that lasted nearly two hours, President Biden “described the implications and consequences if China provides material support to Russia as it conducts brutal attacks against Ukrainian cities and civilians,” the Washington Post reports.  “The call was part of an urgent U.S. effort to head off any Chinese moves to provide economic or military help to Russia as America and its allies try to shut down Moscow’s financial lifelines.”

“There was little indication, however, that Xi was receptive to Biden’s entreaties that his country not come to Russia’s aid.”

Washington Post: “More than two dozen Senate Republicans are demanding that President Biden do more to aid war-torn Ukraine and arm its forces against Russia’s brutal assault, after voting last week against $13.6 billion in military and humanitarian assistance for Ukraine.”

“Switchblade drones are among the military support items President Biden announced yesterday in an $800 million package for Ukraine,” Axios reports.  “Unlike the large drones the U.S. military uses for reconnaissance and deploying weapons against targets, these tiny Switchblades are themselves the weapon.”

Breaking Defense has more on these “suicide drones.”

“In the first weeks of the first major European land war of the 21st century, the United States has sent tank-killing weapons to Ukrainian forces, but not fighter jets. It is equipping embattled Ukrainian troops with lightweight ‘kamikaze’ attack drones, but not, at least in an obvious way, conducting an aggressive cyberwar to degrade Russia’s technological advantage,” the New York Times reports.

“The White House will commit no American or NATO planes to the skies above Ukraine, a move American officials fear could risk turning a regional war into a global conflagration, but it is providing Ukraine with missiles that could accomplish the same task of destroying Russian aircraft.”

“Such is the tenuous balance the Biden administration has tried to maintain as it seeks to help Ukraine lock Russia in a quagmire without inciting a broader conflict with a nuclear-armed adversary or cutting off potential paths to de-escalation.”

Russian president Vladimir Putin held a gigantic, heavily-produced war rally in Moscow’s Luzhniki stadium, which hosted the World Cup final in 2018.  Interestingly, Putin appeared on his own special giant stage so nobody could get within 20 yards of him.

“Three Russian cosmonauts arrived at the International Space Station last night in flight suits made in the yellow and blue of the Ukrainian flag, in what appeared to be a daring statement against the war,” the Times of London reports.

“President Volodymyr Zelensky of Ukraine called publicly on Saturday for direct negotiations with President Vladimir Putin of Russia, but a senior Turkish official said that Mr. Putin was not ready for such talks,” the New York Times reports.

The Turkish official said that Mr. Putin no longer advocated replacing Mr. Zelensky but “now accepts the reality of Zelensky as the leader of the Ukrainian people, whether he likes it or not.”

“Ukrainian President Volodymyr Zelensky said Russian forces are blockading his country’s largest cities to wear the population down into submission, but he warned Saturday that the strategy will fail and Moscow will lose in the long run if it doesn’t end its war,” the Associated Press reports.

“Zelenskyy accused the Kremlin of deliberately creating ‘a humanitarian catastrophe ‘ and appealed for Russian President Vladimir Putin to meet with him, using a huge Moscow stadium rally where Putin lavished praise on Russian forces Friday to illustrate what was at stake.”

“The mounting death toll in Ukraine has forced President Volodymyr Zelensky to consider concessions to Russia in order to bring an end to the devastating conflict, but the specific elements of any peace deal his government may be discussing with Moscow remain a mystery to Western leaders,” the Washington Post reports.

“The secretive rounds of meetings between Russian and Ukrainian negotiators could hold the key to ending the conflict but also carry broader implications for European security depending on how the warring parties settle their differences. If Russian President Vladimir Putin can use military force to compel political change in Ukraine, he could use the same tactic elsewhere, U.S. and European officials fear.”

“The prospects of a near-term deal look bleak, diplomats say, but mixed signals from Zelensky about how close he is to striking an agreement have only heightened anxiety about the trajectory of the negotiations.”

New York Times: “Despite all the determination of Ukraine’s people, all the losses among Russia’s forces, and all the errors of Russia’s leaders, there is no sign that the war will soon be over. Even if he fails to take control of the country, Putin can keep up the punishing attacks on its cities and people.”

“The nation’s largest federally owned utility plans to invest more than $3.5 billion in new gas-burning electric plants, despite President Biden’s commitment to swiftly move away from fossil fuels and eliminate greenhouse gases from the power sector in a little more than a decade,” the New York Times reports.  “The Tennessee Valley Authority, which provides electricity to nearly 10 million people across the Southeast, is replacing aging power plants that run on coal, the dirtiest fossil fuel. But critics say substituting gas for coal would lock in decades of additional carbon dioxide emissions that are heating the planet and could be avoided by generating more electricity from solar, wind or another renewable source.”

“It marks the second time in recent months that a federal entity has clashed with Mr. Biden’s climate agenda. The United States Postal Service is replacing 165,000 aging mail trucks with mostly gasoline-powered vehicles, despite the desire of the White House and leading Democrats to convert the fleet to all-electric vehicles.”

Both the Postal Service and the Tennessee Valley Authority have boards dominated by members nominated by former President Donald Trump.

“Donald Trump’s presidential campaign has been ordered to pay more than $300,000 in legal fees and expenses to a former employee who the campaign’s lawyers said had violated the terms of a nondisclosure agreement when she accused Mr. Trump of forcibly kissing her in 2016,” the New York Times reports.  “The award, the culmination of an arbitration claim that was dismissed in November, represents the latest instance of Mr. Trump’s failure to use a nondisclosure agreement successfully against an ex-worker.”

“A former West Virginia state lawmaker who livestreamed the Jan. 6, 2021, rioting at the Capitol pleaded guilty on Friday to a felony charge of civil disorder over his involvement in the uprising,” The Hill reports.  “Derrick Evans, 36, faces up to five years in prison and a potential fine of up to $250,000.”

House Minority Leader Kevin McCarthy (R-CA) said Republicans would boot House Intelligence Committee Chair Adam Schiff (D-CA) from the committee altogether if they attained the majority in the midterms, The Hill reports.  Said McCarthy: “You cannot make this committee political, you cannot use it as a position of chairman to lie, and you should be focused on what the American people want you to be focused on around the world.”

“Until last summer, Khalid Payenda was Afghanistan’s finance minister, overseeing a $6 billion budget — the lifeblood of a government fighting for its survival in a war that had long been at the center of U.S. foreign policy,” the Washington Post reports.

“Now, seven months after Kabul had fallen to the Taliban, he was at the wheel of his Honda Accord, headed north on I-95 from his home in Woodbridge, Va., toward Washington, D.C. Payenda swiped at his phone and opened the Uber app, which offered his ‘quest’ for the weekend. For now his success was measured in hundreds of dollars rather than billions.”

“The coldest location on the planet has experienced an episode of warm weather this week unlike any ever observed, with temperatures over the eastern Antarctic ice sheet soaring 50 to 90 degrees above normal. The warmth has smashed records and shocked scientists,” the Washington Post reports.

“A federal appeals court has resuscitated a bid by journalists to make public the Justice Department’s grounds for getting a search warrant for Sen. Richard Burr’s (R-NC) phone two years ago during a since-closed criminal investigation into potential insider trading by the North Carolina Republican,” Politico reports.

“We had thought with the ending of the war in Afghanistan, we could push for a real reduction in the defense budget, and there will be another opportunity. But look, this is an epic battle.”  — Rep. Pramila Jayapal (D-WA), quoted by the New York Times.

“In 2021, the Transportation Security Administration caught 5,972 firearms at airport checkpoints, the most ever,” the Washington Post reports.