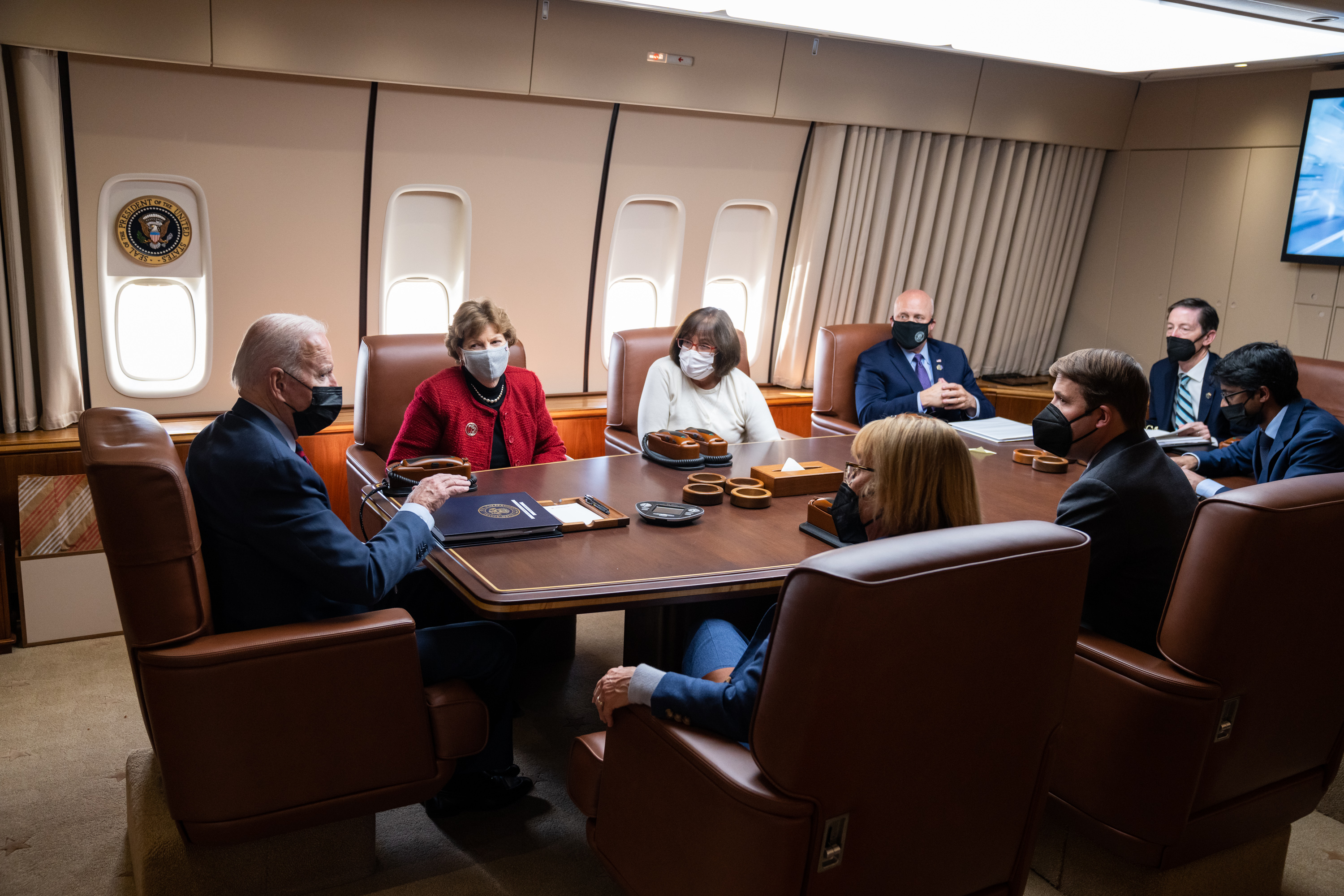 The latest Wall Street Journal poll finds that 15% of U.S. voters don’t like either Joe Biden or Donald Trump.

A recent Susquehanna poll had a similar finding. Biden leads Trump in a possible 2024 rematch by three percentage points (46% to 43%), while Republicans lead by six points on the 2022 generic ballot (47% to 41%).

Both of these polls suggest Trump doesn’t really help the GOP’s electoral prospects.

Said GOP pollster Tony Fabrizio: “A lot of Democrats will want to use Trump as the boogeyman in the midterm elections, but he’s not on the ballot. And that’s really important, given how important inflation and the economy are to voters.”

“More than two years before the next presidential election, a shadow primary is already beginning to take shape among at least three fierce Republican critics of former President Donald Trump to determine who is best positioned to occupy the anti-Trump lane in 2024.”

“Their apparent willingness to run — even if Trump does, as is widely expected — represents a shift from previous years when “Never Trump” operatives failed to recruit any GOP officeholders to challenge the incumbent president. But with the 2024 contest almost in view, the question is no longer whether one of Trump’s prominent Republican critics will run, but how many will mount a campaign and how soon they will announce.”

CNN: “Cheney’s own activity suggests she is laying the groundwork for something more. Last year, she traveled to the early primary state of New Hampshire. She has been making speeches to national Republican organizations such as the centrist Ripon Society. And Cheney has demonstrated impressive fundraising prowess, including raising a personal record $2 million in the final quarter of 2021.”

Politico: “Over the past few weeks, three would-be presidential candidates who hail from the conservative wing of the Republican Party — Arkansas Sen. Tom Cotton, former Vice President Mike Pence and Florida Gov. Ron DeSantis — have prodded at or even outright criticized the former president’s record. After spending years lavishing praise on Trump and touting his policies, they are zeroing in on key moments from his tenure in office, from his pandemic response, to his words and actions regarding Russia, to the prison reform legislation he signed into law.”

“Unlike several potential 2024 contenders who hail from the more moderate wing of the GOP, the three are being guarded in their criticism of Trump. But each critique has attracted special attention given the near-lockstep party support Trump has commanded for years.”

“The DNC hauled in more than $14.4 million in February — the most in any February in DNC history — as Democratic donors are waking to the possibility of their party taking a beating in the midterms,” NBC News reports.

“A Democratic super PAC said it is filing a formal complaint with the Federal Election Commission on Monday accusing Donald Trump of violating campaign finance law by spending political funds on a 2024 presidential bid without formally declaring himself a candidate,” the New York Times reports.

“The complaint uses Mr. Trump’s own words about a 2024 run — ‘I know what I’m going to do, but we’re not supposed to be talking about it yet from the standpoint of campaign finance laws,’ he said in the fall — to accuse him of improperly using his existing political committees to advance a presidential run.”

Politico: “Democrats running for Senate are still holding their fire in primaries. Republicans are stuck in the Thunderdome.”

“GOP candidates are already pummeling each other in monthslong advertising free-for-alls, fights intensified by unprecedented television spending. The parties’ approaches in money spent and messaging could hardly be more different so far, as is the mere number of contested races: For Republicans, there are more than a dozen states where GOP candidates are attacking each other in bids for Senate nominations, while Democrats have unresolved primaries in just two key states — neither of which have turned vicious yet.”

Rep. Madison Cawthorn (R-NC) claimed that Speaker Nancy Pelosi (D-CA) — who doesn’t drink — has a drinking problem.  Said Cawthorn: “Rules for thee but not for me I guess is Nancy Pelosi’s, that’s Nancy Pelosi’s campaign slogan. I’ll tell you I have to work with her every single day so please do pray for me. The theories of alcoholism are very true and it’s very sad.”

CA-Gov: Former San Diego Mayor Kevin Faulconer said Thursday evening that he wouldn’t challenge Democratic Gov. Gavin Newsom, an announcement that came just a day before the filing deadline. Faulconer for years was one of the only Republican rising stars in dark blue California, but last September’s recall campaign saw him plummet hard to earth: Faulconer took a distant third place with just 8% in the race to replace Newsom, a question that didn’t even end up mattering because a 62-38 majority voted against ousting the governor.

NE-Gov: University of Nebraska Regent Jim Pillen’s new commercial for the May GOP primary stars Larry the Cable Guy, who at one point shouts out, “Vote for Jimmy or you’re a communist!” That’s the joke.

CA-09: While astronaut Jose Hernandez, who was the Democratic candidate in a competitive 2012 race for the old 10th District, had filed paperwork last month for a potential intra-party bid against Rep. Josh Harder, he announced Friday that he wouldn’t run.

IL-03: The first poll of the June Democratic primary in Illinois’ redrawn—and open—3rd Congressional District comes from Lake Research Partners on behalf of state Rep. Delia Ramirez’s allies at the Working Families Party, and it shows her leading Chicago Alderman Gilbert Villegas 19-11 with most respondents undecided; a mere 1% goes to Iymen Chehade, a history professor at the center of an ethics probe involving Rep. Marie Newman (who is seeking re-election in the 6th District). The survey argues that Ramirez will increase her lead once voters learn more about each candidate.

MN-01: State Rep. Nels Pierson and former Freeborn County GOP chair Matt Benda have each announced that they’re joining the May special election primary to succeed the late Rep. Jim Hagedorn, a fellow Republican. Pierson was elected to the legislature in 2014 and held on only 51-49 in 2020 even though Donald Trump was taking his constituency by a stronger 52-47, while Benda lost a tight race for the lower chamber all the way back in 2006.

Meanwhile, multiple Republicans tell Politico that they expect Hagedorn’s widow, former state party chair Jennifer Carnahan, to enter the contest ahead of the March 15 filing deadline. Carnahan resigned in disgrace last August after Tony Lazzaro, a close friend and party donor, was arrested on sex-trafficking charges, but she already had her share of enemies within the party: The Associated Press wrote last year that Carnahan was “also accused of creating a toxic workplace environment in which personal and professional lines were blurred, concerns about sexual harassment ignored, and employees who didn’t fall in line were subjected to retaliation.”

In addition, in a recording of a phone call released last year, Carnahan was heard saying of her husband, “I don’t care. Jim, he’s going to die of cancer in two years.” She later said she’d uttered those words “in grief” after drinking following a long day.

“South Dakota Gov. Kristi Noem’s (R) election-year fight with fellow Republicans in the Legislature has spurred criticism she is neglecting her job to angle for the White House, but the resistance could actually be helping her national brand rather than tarnishing it,” the AP reports.

“I have a better, real clear understanding of just how powerful the election of Donald Trump was. In many respects, it lit the fire onto the base of our party, and I think that’s a good thing in many respects, you know. Maybe personally, it didn’t work out for me, but I think he created the energy we needed to oust him as president in four years.”