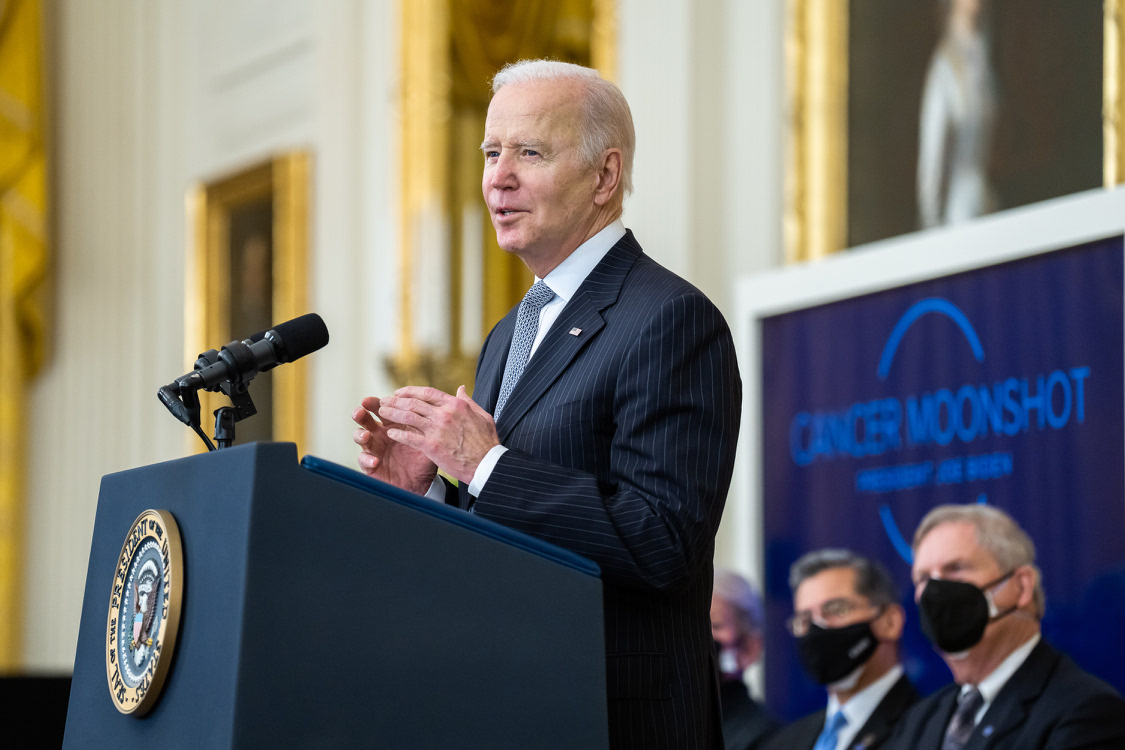 Democrats once thought beating back the pandemic and restoring the economy would be the key to ensuring their political success.  It turns out that was probably necessary but not sufficient.  Falling coronavirus positivity rates and rising employment numbers — and even foreign policy leadership — have barely moved the needle on public opinion.

Instead, a new Wall Street Journal poll last week found that 50% of voters cited inflation as the main issue they wanted the federal government to address — doubling the Ukraine war, which was the number two issue.  But another finding is a five-alarm fire for Democrats: Republicans have a 17-point advantage over Democrats — 47% to 30% — on which party is better able to handle inflation. An astonishing 63% said they disapproved of President Biden’s handling of rising costs.

In other words, Republicans are crushing Democrats on the single most important issue to voters right now.  Democrats have plenty to be proud of since taking control of the federal government last January. The pandemic relief and infrastructure bills were huge successes. The pandemic seems to finally be waning. The strong labor market is another huge positive.

But unless reducing consumer costs is at the center of the Democratic agenda for the midterm elections, everything else will be ignored.  And coming up with new slogans or blaming rising prices on Vladimir Putin won’t nearly be enough.

Rep. Tom Rice (R-SC) slammed former President Donald Trump on Saturday following the former president’s rally in South Carolina, calling him “a would-be tyrant,” The Hill reports.  Rice had voted to impeach Trump after the January 6 insurrection. At the rally, Trump said Rice is a “disaster” and “total fool.”

New York Times: “Other prominent Democrats have also privately voiced discontent to Mr. Biden. Those ranks include Democrats who may also run for president and some who already have. Speaking to a friend last month, Hillary Clinton expressed concern that Mr. Biden was not offering a compelling narrative to voters about his presidency.”

Former Montana Secretary of State Corey Stapleton (R) announced that he is “testing the waters” for a potential run for president of the United States, the Helena Independent Record reports.

“The late Rep. Jim Hagedorn’s (R-MN) widow is laying the groundwork to try to seek his old seat in Minnesota, according to multiple well-placed Republicans who are already raising alarms about her polarizing background,” Politico reports.

“Republicans are preparing for Jennifer Carnahan (R) to launch her campaign for Minnesota’s 1st District as early as Friday… But Carnahan resigned the Minnesota Republican chair position last summer amid a scandal that began when a donor got charged with multiple counts of sex trafficking.”

YouTube has removed a podcast episode featuring Donald Trump because it contained content that “advances claims that widespread fraud, errors or glitches changed the outcome of the U.S. 2020 presidential election,” The Wrap reports.

Trump ripped the decision in a statement: “In the 24 hours that it was up it set every record for them, by many times. Interestingly on the show I told them this would happen because Big Tech and the Fake News Media fear the truth, they fear criticism about Biden, and above all, they don’t want to talk about the Rigged 2020 Presidential Election, all topics discussed.”

“Disney said the company is ceasing its political donations in Florida due to the state’s so-called ‘Don’t Say Gay’ bill, and he apologized for the company’s previous silence on the issue,” CNBC reports.  Said CEO Bob Chapek: “You needed me to be a stronger ally in the fight for equal rights and I let you down. I am sorry.”

“But no such winner was flown to New Orleans last weekend, according to four people familiar with the matter. No flight or ‘very nice’ hotel was booked. Trump had no individual meeting with a small-dollar donor, instead only privately greeting a handful of Republican Party donors who gave large checks, taking pictures with some of the party’s most well-heeled members and speaking to a larger group of donors who each gave tens of thousands of dollars.”

“President Biden and his party have moved in recent days to reorient their election-year pitch to voters around Russia’s invasion of Ukraine — seeking to shift blame for struggles to tame rising prices onto Vladimir Putin and promoting the White House strategy to punish the Kremlin as a muscular response to a geopolitical threat,” the Washington Post reports.

“Democrats said they hope the message, which they honed in political meetings over the past week, will help address some of their biggest liabilities ahead of the November midterm elections. Chief among them are Biden’s low approval ratings and a widespread perception that Democrats are at fault for a sharp increase in inflation.”

“Donald Trump will headline a rally in Georgia this month to try to turn the tide of the election against Gov. Brian Kemp and other Republicans he’s vowed to unseat,” the Atlanta Journal Constitution reports. “The former president will headline a March 26 event to boost Perdue and other GOP candidates he’s endorsed as part of an ongoing vendetta against state leaders who refused his attempt to illegally overturn the election.”

“I ran twice, I won twice, and I did much better the second time.” — Donald Trump, quoted by Rolling Stone, on the 2020 presidential election that he lost by over seven million votes.

MO-Sen: When LL Cool J demanded, “Don’t call it a comeback,” he gave us good reason to believe him with the explosive success of his fourth studio album, “Mama Said Knock You Out.” But when a politician tells you, “Don’t call it an endorsement,” it’s probably just a load of malarkey.

Take Republican Dave Schatz, the president pro tem of the Missouri State Senate who’s running to replace retiring U.S. Sen Roy Blunt. Later this month, Schatz is hosting a fundraiser where Gov. Mike Parson will be featured as a “special guest.” Parson hadn’t previously weighed in on the contest, which includes a large cast of ambitious hopefuls and even one nightmare candidate that national Republicans are eager to block.

But if you’re actually helping one of the contenders to raise money, that means you want them to win the race, right? Well, not according to Schatz, who insists, “I wouldn’t say it’s an endorsement.” Perhaps he wouldn’t—but we would! It’s not as though the concept of an “endorsement” has any legal significance. If anything, headlining a fundraising event is a much bigger deal than simply slapping your name on a press release announcing you’re endorsing someone: One generates actual dollars, the other generates … a press release.

Schatz also said of Parson, “I think anybody who would ask him to help in that way, I think he’s not opposed to that.” Anybody? Really? Even Eric Greitens? Yeah, we don’t think so. Look, if Parson does wind up helping other candidates raise money, then we’ll concede the point. But unless and until that happens, Schatz is just playing a silly game—perhaps even one Parson insisted he play.

That first charge is accompanied by 2000 footage of Mandel, who was student body president at OSU at the time, alongside Gore during the vice president’s visit to campus, video that became public in 2011 during Mandel’s first failed bid for the Senate. Mandel did not actually endorse Gore, and Michael Kruse recently wrote in a long profile in Politico that “Mandel celebrated, too, a visit to campus by Republican candidate John McCain.” Of course, that may be a far worse offense in today’s GOP.

Mandel’s allies at the Club for Growth, meanwhile, are focusing once again on a different intra-party opponent, former state party chair Jane Timken. Their new commercial declares that one of Vladimir Putin’s “old oligarchs partnered with Jane Timken’s family business to build high-capacity freight rail cars, supplying Putin’s government with military-grade machinery.” The narrator continues, “Timken’s family gets rich, Timken money funds her campaign. And she has the gall to run for United State Senate.” (By the way, that makes this the second Putin-related ad we’ve seen so far in a GOP Senate primary, following one in North Carolina.)

NC-Sen: Rep. Ted Budd has dropped a Meeting Street Research internal that shows him trailing former Gov. Pat McCrory 31-25 in the May Republican primary, with former Rep. Mark Walker grabbing 16%; the memo says that an unreleased June poll gave McCrory a 45-19 edge and argues that the congressman “has a lot of room to grow thanks to President Donald Trump’s endorsement.”

Those numbers, though, may have been overshadowed by the over-the-top Budd press release accompanying them, which included the line, “Politico [sniffs disdainfully and orders another cocktail at the country club]: That can’t be right. We have been ASSURED by some of the premier Establishmentarians in Washington that President Trump has zero juice in primaries anymore.”