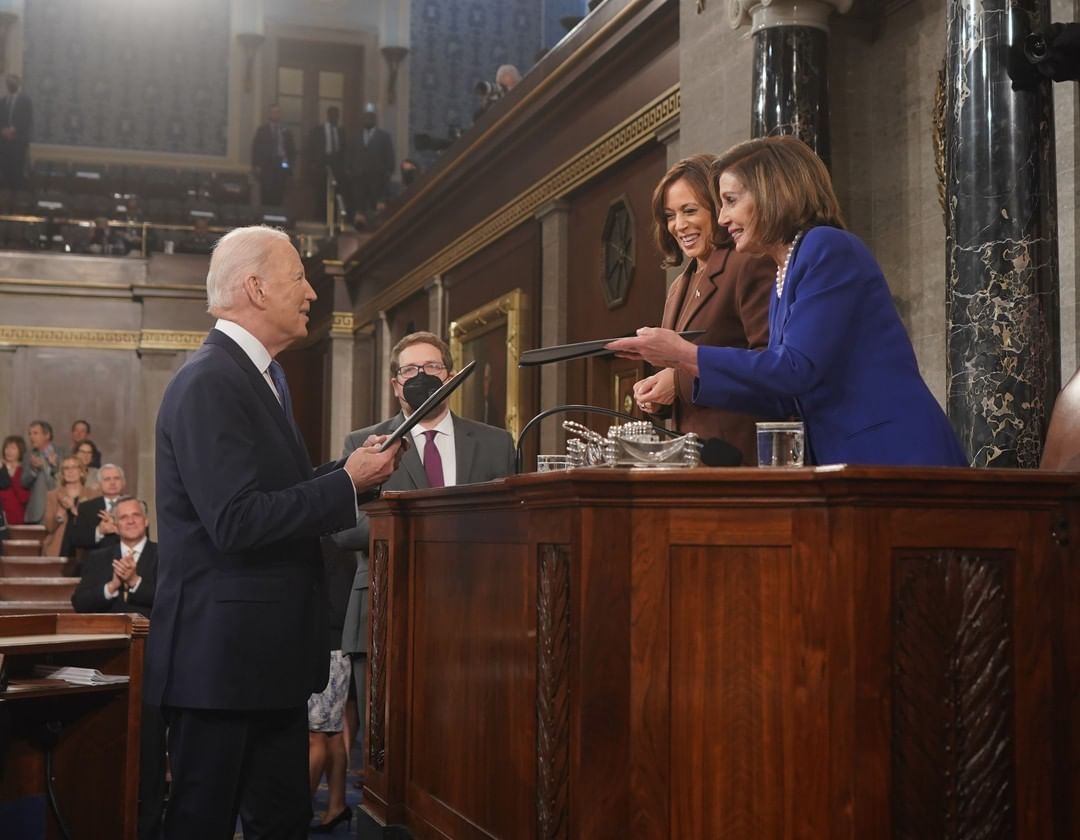 Aaron Blake: “We looked back through the Roper Center’s polling archive to see how Putin’s new numbers compared to some of the most nefarious leaders in the recent past. The upshot: Putin is now in the territory of Osama bin Laden, Saddam Hussein, Kim Jong Un, Fidel Castro and Iranian Ayatollah Ruhollah Khomeini.”

Nate Cohn: “In a striking — if perhaps not surprising — shift over the last year and since Russia’s invasion, an overwhelming majority of Americans now say Ukraine is a friendly country. In a new YouGov survey, 81 percent of Americans say Ukraine is either friendly or an ally, a figure that rivals or even exceeds that of many longtime U.S. allies like France or Japan. Only Britain, Canada and Australia earned more favorable ratings from voters.”

A new CBS News poll finds 77% of America s support U.S. sanctions on Russia’s oil and gas.  “The overwhelming support for sanctions on Russia’s oil and gas, and the willingness to pay more as a result, is the kind of widespread sentiment we don’t always see in public opinion these days: bipartisan, cutting across race, region, and even income. And it is driven, Americans say, by a desire to help Ukraine and punish Russia.”

A new Wall Street Journal poll finds Joe Biden and Donald Trump are deadlocked in a possible 2024 presidential match up, 45% to 45%.

Donald Trump claimed to Sean Hannity that he had a “very strong” conversation with Vladimir Putin in which he received assurance that Putin wouldn’t invade Ukraine while he was in office.

He also declined to call Putin “evil” when prompted by Hannity.

“National Democratic leaders have drafted a proposal that could significantly reshape the party’s presidential nominating process and put an end to Iowa’s prized first-in-the-nation caucuses — a tradition that has shaped presidential politics and boosted Iowa’s place in the American spotlight for the last half-century,” the Des Moines Register reports.

“A draft resolution… would set new criteria for early-voting states that favor primaries over caucuses and diversity over tradition.”

“If the proposal advances, it would upend the party’s presidential nominating calendar by requiring states to apply to hold their nominating contests before the rest of the country and expanding the number of early voting states to as many as five. Iowa, New Hampshire, Nevada and South Carolina, which currently lead off the process, would not necessarily be given preferential consideration over other states that apply.”

Leaving aside what a mess the Iowa caucuses were in 2020, the idea that two non-diverse states like Iowa and New Hampshire lead off the Democratic party’s nomination process never made much sense.

“Dozens of voting members of the Democratic National Committee quietly met Friday to organize a new voting block to push for changes to the internal governance of the national party and send more money to state party groups,” the Washington Post reports.

“The war in Ukraine has opened a new front in the U.S. Republican Party’s civil war, with party primary candidates vying to run in the November midterm elections attacking each other for past comments praising Russian President Vladimir Putin,” Reuters reports.

Elaine Godfrey: “It was fair, last week, to question whether Republicans in Congress would condemn Russia’s invasion of Ukraine, because the party’s de facto leader was praising Vladimir Putin’s aggression as ‘genius’ and ‘wonderful.’ Yet instead of falling in line behind Donald Trump, most congressional Republicans have denounced Putin just as loudly as Democrats have.”

“This fact would not have been surprising just a few years ago. But it’s one of the more meaningful distinctions that rank-and-file members of the party have drawn recently between themselves and the former president, a man with an almost preternatural ability to turn anyone who questions him into a political pariah. At least temporarily, the war in Ukraine has established a cease-fire between America’s ever-dueling parties, and lowered the temperature on Capitol Hill by a few degrees. Many Republicans seem relieved, both for the reprieve and for the chance to distance themselves a bit from Trump. The break probably won’t last long.”

“Top Democratic operatives see expanding defections by Hispanic voters to the GOP, worsening Democrats’ outlook for November’s midterms,” Axios reports.  “Democrats had hoped this might be a phenomenon specific to the Trump era. But new polling shows it accelerating, worrying party strategists about the top of the ticket in 2024.”

A Wall Street Journal poll finds that by 9 points, Hispanic voters said they’d back a Republican candidate for Congress over a Democrat. In November, the parties were tied.

PENNSYLVANIA U.S. SENATOR. Rep. Conor Lamb is spending at least $198,000 on his first TV ad for the May Democratic primary, a commercial that highlights his background in the Marines and as a federal prosecutor. After introducing Lamb, a narrator continues, “And when a mob stormed the Capitol on Jan. 6, Lamb stood up to the Republicans, calling out their lies.” The voiceover concludes, “Our best chance to beat the Republicans this fall, Lamb has defeated the Trump machine three elections in a row.”

OKLAHOMA U.S. SENATOR B. Former state House Speaker T.W. Shannon  announced Thursday that he would enter the special election to succeed departing Sen. Jim Inhofe, a campaign that will take place eight years after Shannon lost the Republican nomination for Oklahoma’s other Senate seat to now-Sen. James Lankford. The primary may also add another candidate soon, as Rep. Kevin Hern has confirmed he’s considering, though he acknowledged he would need to give up his coveted spot on the House Ways and Means Committee to run.

Shannon made history in 2013 when he became the first African American or Chickasaw Nation member to lead the state House, and he got the chance to mark another milestone when Sen. Tom Coburn resigned the following year. Shannon earned endorsements from anti-establishment groups, which spent $1.7 million on his behalf, but he faced a tough contest against then-Rep. Lankford. Shannon and his allies tried to portray his opponent as too close to D.C. leaders, while Lankford fought back by emphasizing his own conservative record. The congressman also made sure to broadcast a statement from Coburn, who was ostensibly neutral, condemning the ads against Lankford while praising him as “a man of absolute integrity.”

Polls showed Lankford ahead but not close to the majority he needed to avoid a runoff, but he ended up prevailing by a surprisingly strong 57-34 margin, a showing fellow Sooner State politicians attributed to his extensive connections with the state’s large Baptist community. Shannon also likely suffered because his allies, who incorrectly assumed there would be a second round of voting, focused their resources on an unsuccessful attempt that same day to deny renomination to Mississippi Sen. Thad Cochran. Shannon went on to co-chair Black Voices for Trump and to lead Chickasaw Community Bank, but this is the first time he’s sought office since that 2014 defeat.

IOWA GOVERNOR. Deidre DeJear, who is the only Democrat in the race with just over a week to go before the filing deadline, has earned an endorsement from 2018 nominee Fred Hubbell. The Des Moines Register writes that Hubbell’s support could help encourage donors to contribute to DeJear, who has struggled to raise money.

WISCONSIN U.S. SENATOR. Republican Sen. Ron Johnson, who has up until now run ads showcasing him as a hardline conservative culture warrior, uses his newest spots (here and here) to depict him as a caring person. Both spots star Markeitha Smith, the widow of a late Milwaukee pastor. Smith in one commercial says of the senator, “When I lost my husband, he made sure he reached out to me. He made sure I had everything that I need.”

CALIFORNIA 3RD and 49TH CDs. The California GOP issued endorsements on Thursday in two primaries contested by multiple credible Republicans. One went to Assemblyman Kevin Kiley, who is running in the open 3rd District, while the other was bestowed on financial advisor Brian Maryott, who is waging another campaign against Democratic Rep. Mike Levin in the 49th. The rest of the party’s congressional endorsements went to incumbents, candidates who face no serious intra-party opposition, and people seeking safely blue constituencies.

CALIFORNIA 41ST CD. On Thursday, one day ahead of California’s filing deadline, pastor Brandon Mosely announced that he was ending his campaign against Republican Rep. Ken Calvert and endorsing fellow Democrat Will Rollins, a former federal prosecutor.

MINNESOTA 1ST CD. Jeff Ettinger, who served as CEO of the food processing giant Hormel from 2005 through 2016, announced Thursday that he would run as a Democrat in the special election to succeed the late Republican Rep. Jim Hagedorn. Ettinger, who has not been politically active before, is campaigning as a moderate, saying, “I think solutions that come from the middle stick, and are accepted by people more.”

NORTH CAROLINA 11TH CD. Local media reported Wednesday that the North Carolina State Highway Patrol had charged Republican Rep. Madison Cawthorn days before with driving on a revoked license. The congressman had been similarly charged in a 2017 case that was later dismissed, though law enforcement, citing privacy laws, would not comment on what Cawthorn had done to get his license revoked in the first place.

NEW YORK 4TH CD. Malverne Mayor Keith Corbett announced Wednesday that he was joining the June primary to succeed retiring Rep. Kathleen Rice, a fellow Democrat. Corbett, who leads a village with a population of about 8,500, is close to Jay Jacobs, who chairs both the state and Nassau County parties. Jacobs praised both the mayor and another contender, Nassau County Legislator Siela Bynoe, saying, “Between the two of them will come a candidate that’ll win.”

The chair himself made news last week when he emailed party donors and told them that they should “HOLD OFF on making ANY contributions to ANY of the candidates until we have had an opportunity to discuss the complexities of the race.” Jacobs added that he believed that “[n]ot every one of the contenders right now” could win, and while he didn’t elaborate at the time, he now tells Newsday that former Hempstead Town Supervisor Laura Gillen “would have a very tough time winning in this congressional seat, given what I know about the voters and the opposition that she would have.” He didn’t elaborate on what he felt Gillen’s drawbacks were, though Jacobs says that he’d also unsuccessfully encouraged her to seek an open state Senate seat.

On Thursday, the DCCC unveiled the first round of its “Red to Blue” program for the 2022 election cycle, highlighting candidates whom the committee thinks has the strongest chance of picking up GOP-held districts or defending competitive open seats. The full list of contenders making the DCCC’s initial roster are below:

Most of these candidates don’t face any serious intra-party opposition in their primaries. The most notable exception is Gordon, who faces two Suffolk County legislators, Bridget Fleming and Kara Hahn. Rose also has to get past Army veteran Brittany Ramos DeBarros in his own primary, but he looks like the favorite.

The DCCC’s counterparts at the NRCC have a similar program called Young Guns, but there are some key differences between the two operations. When the DCCC adds a candidate to Red to Blue, it’s declaring that this contender is the national party’s choice in a key race. By contrast, the NRCC often will highlight multiple candidates running in the same race, as well as people running in safely red open seats.

OKLAHOMA 2ND CD. State Rep. Dustin Roberts announced that he was entering the June primary to succeed Rep. Markwayne Mullin, a fellow Republican who is running for the Senate. Both Roberts and the congressman are citizens of Native American nations: Roberts is a member of the Choctaw Nation while Mullin is part of the Cherokee Nation.