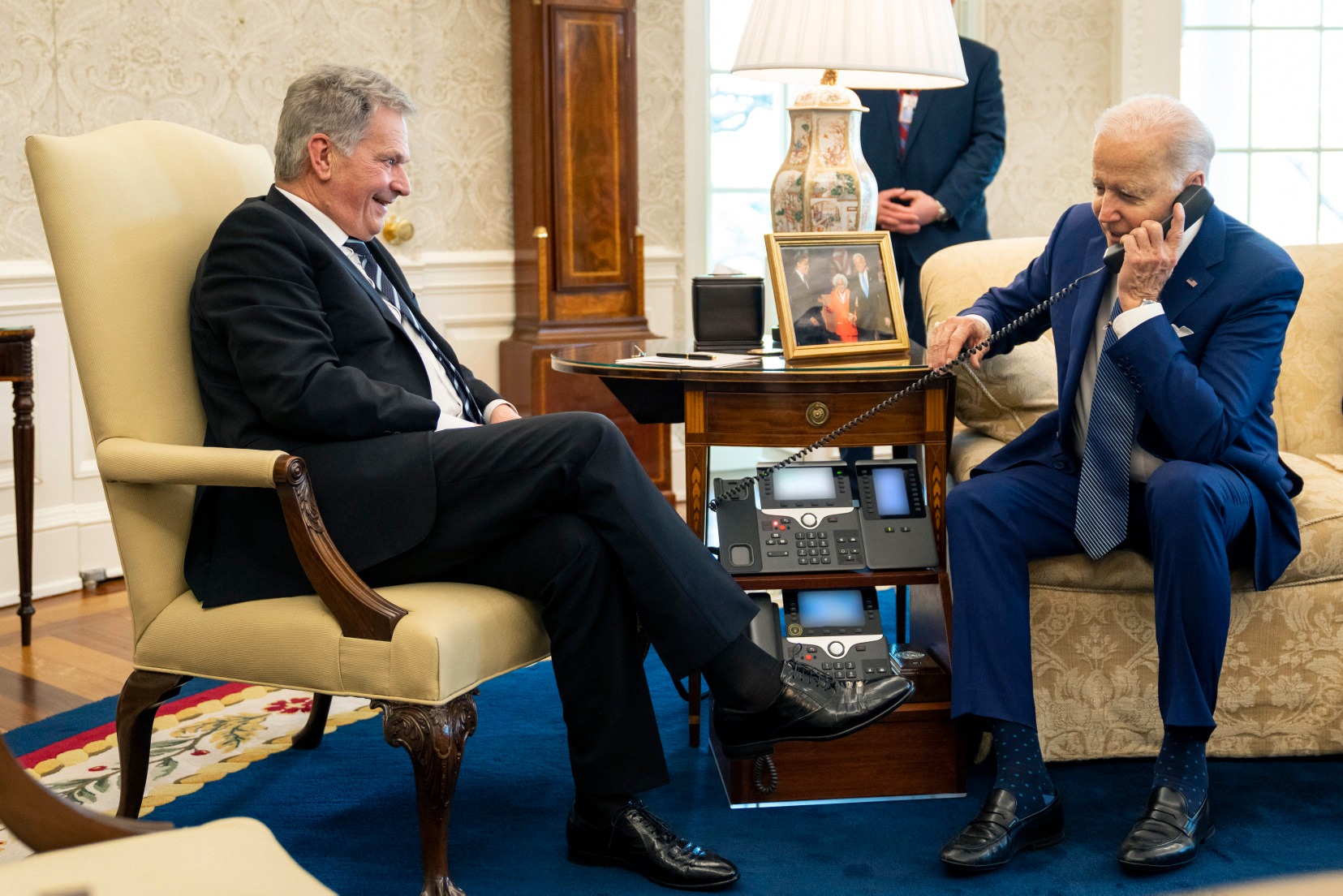 “At least 35 people were killed and 134 injured early Sunday when a barrage of Russian missiles slammed into a military facility in Western Ukraine about 15 miles from the border with Poland, a NATO member,” the Washington Post reports.

“The Yavoriv military range near Lviv, also known as the International Peacekeeping and Security Center, has for years been used for exercises by NATO troops and Ukrainians, with Americans on-site as recently as February… The airstrike came a day after the Kremlin warned that it viewed Western weapons shipments as ‘legitimate targets,’ heightening the possibility of a direct conflict with the West.”

Wall Street Journal: “Russia’s attempt to use rapid thrusts by armored columns and assaults by paratroopers and special forces to seize the Ukrainian capital of Kyiv and other cities, overthrowing the country’s government, has stalled in the face of fierce resistance. Now, Moscow is resorting to a punishing, wholesale destruction, shelling and bombing residential neighborhoods and historic downtowns.”

“Kharkiv has been pulverized with particular cruelty, even though almost all of its citizens are Russian-speakers, many of whom felt affinity with Russia in the past.”

“When Russia invaded Ukraine last month, a spate of wishful thinking ran through the West that China, a great power with friends on both sides, might step in to mediate a cease-fire,” the Los Angeles Times reports.  “China’s government struck a pose of neutrality, called for a peaceful resolution and said it supported the principle of ‘territorial integrity.’ Ukrainian President Volodymyr Zelensky made a public plea to China’s Xi Jinping to intervene.”

“But Xi has been missing in action — and in practice, his policies have been far less neutral than advertised.”

National Security adviser Jake Sullivan will travel to Rome on Monday to meet Yang Jiechi, China’s top foreign policy official, in talks that are expected to focus on the war in Ukraine, the highest level US-China face-to-face meeting since the Russian invasion began, the Financial Times reports.

“As international companies pause operations or withdraw from Russia as punishment for its invasion of Ukraine, President Vladimir Putin is openly discussing seizing assets from those companies,” the New York Times reports.  “Among the most lucrative assets in Russia that are at risk are airplanes… All told, the planes are worth as much as $12 billion.”

Francis Fukuyama: “Russia is heading for an outright defeat in Ukraine. Russian planning was incompetent, based on a flawed assumption that Ukrainians were favorable to Russia and that their military would collapse immediately following an invasion. Russian soldiers were evidently carrying dress uniforms for their victory parade in Kyiv rather than extra ammo and rations. Putin at this point has committed the bulk of his entire military to this operation—there are no vast reserves of forces he can call up to add to the battle. Russian troops are stuck outside various Ukrainian cities where they face huge supply problems and constant Ukrainian attacks.”

“The collapse of their position could be sudden and catastrophic, rather than happening slowly through a war of attrition. The army in the field will reach a point where it can neither be supplied nor withdrawn, and morale will vaporize. This is at least true in the north; the Russians are doing better in the south, but those positions would be hard to maintain if the north collapses.”

“There is no diplomatic solution to the war possible prior to this happening. There is no conceivable compromise that would be acceptable to both Russia and Ukraine given the losses they have taken at this point.”

Evelyn Farkas: “We need to make our own judgments about what counts as escalation and what counts as a reasonable step to help Ukrainians, and not defer to Putin on these questions. After all, he has already asserted that economic sanctions amount to a “declaration of war” (and yet he has not responded as if he believes this). And when considering whether a NATO move would be ‘provocative,’ it is important to remember that Putin provoked all of this — he chose to launch this unjustified war against Ukraine.”

“Ultimately, we must weigh the dangers of escalation against what is at stake: the real possibility — given the brutal nature of the war so far — of the slaughter of civilians that could rise to the level of genocide. And we should weigh those dangers against what the United Nations calls the “responsibility to protect.” While there are risks in helping Ukraine survive the Russian onslaught, there are also risks in letting Putin’s expansionist aggression go unchecked. If he sees that NATO will sit back and let him take Ukraine, he is likely to turn next to other neighboring former Soviet republics that aren’t in the alliance, such as Moldova and Georgia (which he already invaded once, in 2008)…”

“By publicly dithering about providing fighter jets, and rejecting out of hand even limited humanitarian no-fly zones, we are setting unnecessary limits on ourselves and deferring to Putin — while the Russian army remorselessly kills Ukrainian civilians.”

“The war in Ukraine has prompted the biggest rethinking of American foreign policy since the Sept. 11, 2001, attacks, infusing the United States with a new sense of mission and changing its strategic calculus with allies and adversaries alike,” the New York Times reports.

“The Russian invasion has bonded America to Europe more tightly than at any time since the Cold War and deepened U.S. ties with Asian allies, while forcing a reassessment of rivals like China, Iran and Venezuela.”

“And it has re-energized Washington’s leadership role in the democratic world just months after the chaotic U.S. withdrawal from Afghanistan ended 20 years of conflict on a dismal note.”

“The U.S. won’t negotiate exemptions to Ukraine-related sanctions on Russia to save the 2015 Iranian nuclear deal and instead would try to strike an alternative agreement that excludes Russia if the Kremlin doesn’t back off from last-minute demands,“ the Wall Street Journal reports.

“With one of President Biden’s top foreign-policy goals imperiled, the senior U.S. official said Moscow had a week to withdraw its demand for written guarantees exempting Russia from any Ukraine-related sanctions that would constrain Moscow’s future trade with Iran. Such guarantees could undercut the West’s punishing array of sanctions leveled at Russia over the Ukraine invasion.”

Brent Renaud, an award-winning American filmmaker and journalist, was killed in Ukraine on Sunday while reporting in a suburb of the capital, Kyiv, the New York Times reports.

“The amount of evidence collected as part of the investigation into the Jan. 6, 2021, insurrection rivals what the Hubble telescope has amassed in its three-decade orbit. And sorting through it all has ground many of its criminal cases to a halt,” the Los Angeles Times reports.

“To speed things along, U.S. attorneys and public defenders have teamed up to create a massive, searchable database to comb through the thousands of social media messages, videos and other evidence produced when the assault on the Capitol was broadcast to the world by journalists, bystanders and the rioters themselves.”

Fox News host Maria Bartiromo wondered aloud whether President Biden actually wanted to see Ukraine “taken down” and was looking to “sell out” the country.  Said Bartiromo: “Some people have told me over the weekend that they feel that, at the end of the day, this administration does not see Putin as the enemy, they see him as a partner!”

“At an Oval Office meeting with then-Ukrainian president Petro Poroshenko in 2017, Donald Trump asked his national security adviser if U.S. troops were in Donbas, territory claimed by Russian-backed separatists,” The Guardian reports.  Writes then U.S. ambassador to Ukraine Marie Yovanovitch, in her new book: “An affirmative answer to that question would have meant that the United States was in a shooting war with Russia.”

She added: “I pondered whether it was better to interpret Trump’s question as suggesting that the commander-in-chief thought it possible that US troops were fighting Russia-led forces, or instead as an indicator that the president wasn’t clear which country was on the other side of the war against Ukraine. Either way, it was disconcerting that he did not seem to know where we had our troops – his troops – deployed. I could only imagine what the Ukrainians were thinking.”

Rep. Adam Kinzinger (R-IL) expressed regret for failing to vote to impeach former President Trump the first time over his dealings with Ukraine in light of the recent Russian invasion, The Hill reports.  Said Kinzinger: “I want to be honest, in congress I have only a few votes that in hindsight, I regret. My biggest regret was voting against the first impeachment of Donald Trump.”

Former President Donald Trump called on his supporters to “lay down their very lives” to fight against Critical Race Theory at a rally in South Carolina last night.  Said Trump: “If we allow the Marxists, and communists, and socialists to hate America, there will be no one left to defend our flag or to protect our great country or its freedom.”

Meanwhile, Trump has lost a legal bid to countersue journalist E. Jean Carroll who has accused him of raping her nearly 20 years ago, Bloomberg reports.  In a scathing decision, U.S. District Judge Lewis Kaplan said Trump’s continuing attempts to delay the 2019 case were “futile” and in “bad faith.”

“Pro-Russian channels and QAnon conspiracy theorists think Moscow is launching airstrikes on Ukraine to destroy bioweapon manufacturing labs in order to prevent the American infectious disease expert Anthony Fauci from creating a sequel to the COVID-19 virus,” Foreign Policy reports.  “This theory hangs on the entirely discredited idea that the coronavirus was designed as a bioweapon, perhaps by the U.S. government itself. And yet, the theory is being shared thousands of times, faster than regulated social media networks can yank the conspiracy theory down. On unregulated platforms, such as Telegram and 8chan, the conspiracy theory has become incredibly popular, racking up hundreds of thousands of hits each day.”

“The theory is now being actively contributed to, and promoted, by one Russian embassy, an official Russian state propaganda outlet, and media channels in Serbia and China.”

Andrew Sullivan: “It would perhaps be too glorious an irony if it were Vladimir Putin who finally buzz-killed the American and European right’s infatuation with post-liberalism.”

“But, as Russia’s invasion of Ukraine staggers shambolically and criminally forward, it’s no longer unthinkable. The icon of the West’s new right is in serious trouble now — and it might tarnish all of those who only yesterday were idolizing his reactionary zeal.”

“At first, the White House resisted calls from Congress to ban Russian oil imports to the U.S. And then, it did just that,” the AP reports.

“The administration hit the brakes on legislation that would have revoked Russia’s normal trade status, until President Joe Biden announced the move Friday. The administration persuaded senators to hold off on imposing Russian sanctions, then slapped stiff sanctions itself. It rejected efforts in Congress to stop the Nord Stream 2 energy pipeline, then led allies in halting it.”

“It’s an emerging pattern that has not gone unnoticed during the escalating war in Ukraine: A remarkably unified Congress is out front on foreign policy, pressuring Biden to go further and faster with a U.S. response to a devastating conflict that has no clear endgame in sight.”

“Officials in Poland’s two largest cities have warned that they can no longer cope with the waves of refugees fleeing Russia’s invasion of Ukraine,” the Washington Post reports.

“The mayors of both Warsaw, the capital, and Krakow, Poland’s second largest city, said that they are struggling to accommodate the sheer number of people who are arriving — and urged the United Nations and European Union to intervene.”