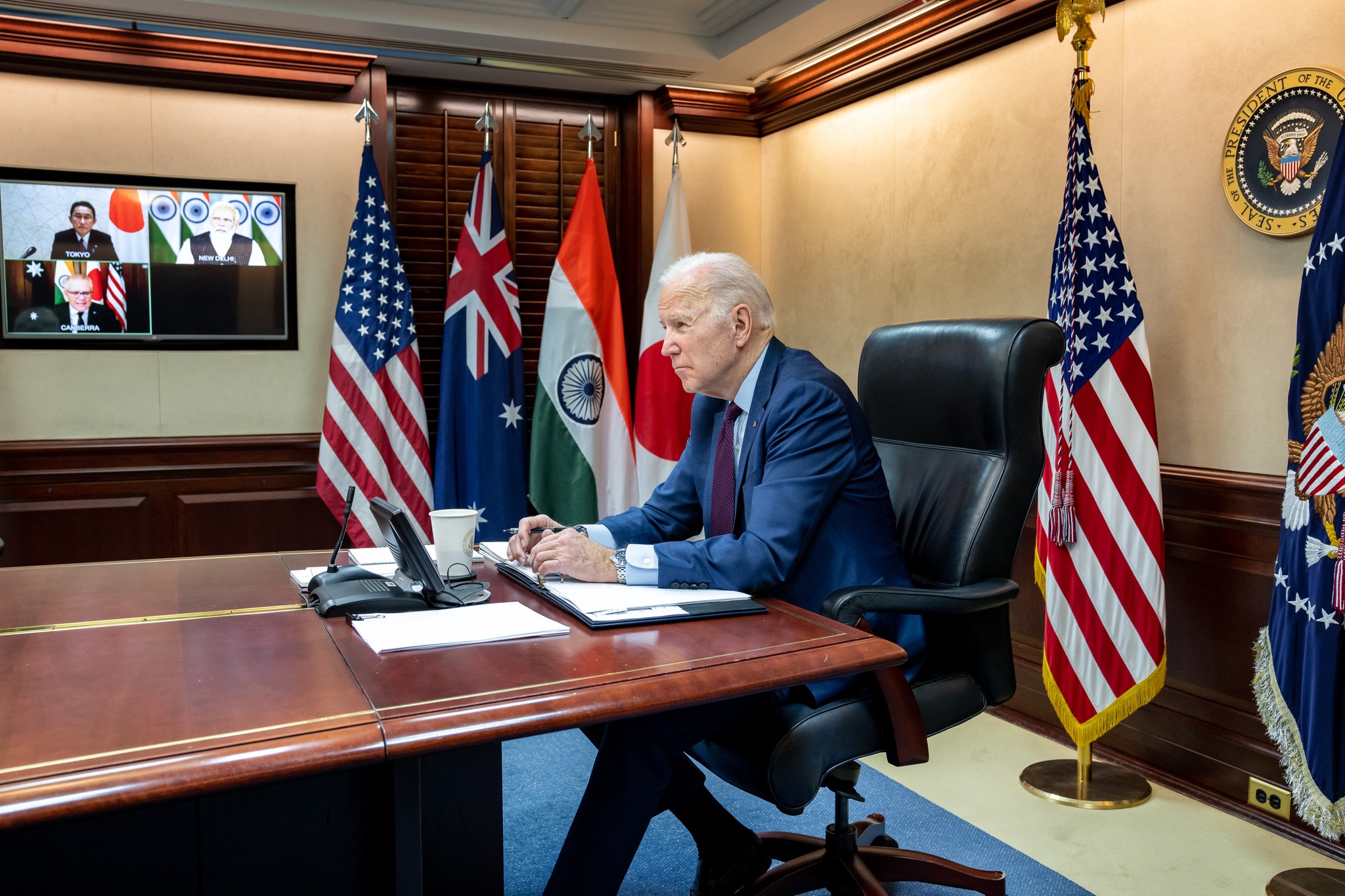 “President Joe Biden will announce Friday that the US, along with the G7 and European Union, will call for revoking ‘most favored nation’ status for Russia,” CNN reports.  “Each country is expected to implement this measure based on its own national processes. The sources made note of congressional efforts to revoke Russia’s permanent normal trade relations.”

“Besieged by an onslaught of sanctions that have largely undone 30 years of economic integration with the West in the space of two weeks, President Vladimir Putin on Thursday opened the door to nationalizing the assets of Western companies pulling out of Russia and exhorted senior officials to ‘act decisively’ to preserve jobs,” the New York Times reports,

“With Russia in danger of defaulting on its sovereign debt and facing a sharp contraction in its economy, the West is betting that the looming, generation-defining economic crisis could make Russians turn on their president. It is also possible, however, that the crisis could end up strengthening Mr. Putin, validating his narrative that the West is determined to destroy Russia.”

Bloomberg: “The campaign to starve Russia of technology — stripping the nation of everything from iPhones and Airbnb listings to defense electronics — is an unprecedented experiment that risks pushing Vladimir Putin further into China’s orbit.”

Anatol Lieven: “One of the worst effects of this war is going to be deep and long-lasting Russian isolation from the west. I believe, however, that Putin and the siloviki (though not many in the wider elites) welcome this isolation. They are becoming impressed with the Chinese model: a tremendously dynamic economy, a disciplined society and a growing military superpower ruled over with iron control by a hereditary elite that combines huge wealth with deep patriotism, promoting the idea of China as a separate and superior civilization.”

Deutsche Bank said it is not “practical” to close its Russia business, despite similar moves by major corporations seeking to distance themselves from the country over its invasion of Ukraine, CNBC reports.

“Goldman Sachs, the giant New York investment bank, is cashing in on the war in Ukraine by selling Russian debt to U.S. hedge funds — and using a legal loophole in the Biden administration’s sanctions to do it,” NBC News reports.  “As the Western world scrambles to defend Ukraine by locking down Russian money, the company is acting as a broker between Moscow’s creditors and U.S. investors, pitching clients on the opportunity to take advantage of Russia’s war-crippled economy by buying its debt securities low now and selling them high later.”

“As Western leaders congratulate themselves for their speedy and severe responses to Russia’s invasion of Ukraine, they’re also scratching their heads with uncertainty about what their actions will accomplish,” the AP reports.  “They may not say it publicly, but U.S. officials and their NATO allies don’t see a breaking point for Putin — either an economic toll so severe or battlefield losses so devastating — that would convince him to order his troops home and allow Ukraine’s leaders to govern in peace.”

David Brooks: “There have been hints that Putin might be willing to cut a deal with some sort of compromise and retreat from Ukraine, but that would be a shock. It would destroy the bloated and fragile personal and national identity that he has been building all these years. People tend not to compromise when their very identity is at stake.”

David Rothkopf: “The likelihood that the conflict may go on for much longer is based on the fact that neither side is in a position to win a quick victory.”

“For all their courage and the damage they are inflicting on the Russians, it is hard to imagine Ukraine’s armed forces will drive out Moscow’s troops any time soon. More likely is that Russia continues to make slow gains. They are not well set up for urban fighting and we could see stand-offs in major cities.”

“We are all dealing with a terrorist state.” — Ukraine president Volodymyr Zelensky, quoted by The Guardian, on Russia.

“One of Russia’s most incendiary disinformation campaigns ramped up days ago, when its defense and foreign ministries issued statements falsely claiming that the Pentagon was financing biological weapons labs in Ukraine,” the New York Times reports.

“Then Chinese diplomats and state media organizations repeated the conspiracy theory at news conferences in Beijing, in articles and on official social media accounts.”

“Now, the Biden White House has taken the extraordinary step of calling out both countries on their coordinated propaganda campaign and saying they might be providing cover for a potential biological or chemical weapons attack on Ukrainians by the Russian military.”

Politico on why the Polish-MiG fighter jet deal failed: “The transfer might have been possible if the deal was kept under wraps, but that became impossible after Josep Borrell, the EU’s foreign affairs and security policy chief, declared unequivocally to reporters on Feb. 27 that the bloc would provide Ukraine with fighter jets. The announcement came as a shock to many, U.S. and European officials said, including aides in Eastern European capitals who hoped to keep the transfer quiet.”

“But the Ukrainian government heard the proposal and ran with it, producing infographics claiming they were about to receive 70 used Russian fighter jets from Poland, Slovakia and Bulgaria. A Ukrainian government official told Politico that Ukrainian pilots had even traveled to Poland to wrap up the deal and bring the planes back over the border.”

“Congress cleared the first major federal spending legislation of President Biden’s administration on Thursday, approving a $1.5 trillion measure with substantial increases for domestic and national security programs, along with $13.6 billion in emergency aid for Ukraine as it battles Russia’s invasion,” the New York Times reports.  “The Senate approved the 2,700-page measure by a vote of 68 to 31 less than two days after it was finalized and pushed through the House, a rapid timetable that reflected strong bipartisan support for assisting Ukraine and a sense of urgency to avert a government shutdown within days.”

“The bill, which funds the government through September, includes generous spending on domestic programs long prioritized by Democrats and military investments championed by Republicans.”

“The United States is poised to run out of tests, treatments and vaccines to fight the coronavirus after a $15.6 billion funding plan collapsed in Congress on Wednesday, alarming health-care advocates and raising concerns about the fate of President Biden’s broader covid response plan,” the Washington Post reports.

“The number of people worldwide who died because of the pandemic in its first two years may total more than 18 million, according to a sobering study released Thursday,” NBC News reports.  “That’s three times more than the reported global death toll from Covid-19, which crossed 6 million earlier this week.”

“Travelers will have to continue to wear masks until April 18 when flying commercially and in other transportation settings, including on buses, ferries and subways,” the Washington Post reports.

Janan Ganesh: “By cutting immigration and elevating technocracy, the coronavirus pandemic wounded populism. But the Ukraine war is much the worst setback for that movement since its electoral breakthrough in the US and UK in 2016.”

“In the west, a certain kind of leftism never recovered from the vicarious shame of the Soviet quelling of Hungary in 1956. This moment might come to be recorded as an equivalent watershed for the west’s populists.”

Just hours after he was caught on tape trashing Ukrainian President Volodymyr Zelensky in Putin-esque terms at a recent town hall, far-right Rep. Madison Cawthorn (R-NC) held another town hall at a North Carolina county Republican HQ on Thursday and expressed his deep regret that there was an election.

“I have got to tell you how sorry I am that in Washington, DC, we were not able to stop the 2020 election from happening,” a somber Cawthorn told his supporters.

Cawthorn’s apology, which was obviously rooted in Trump’s Big Lie, came after he accused Zelensky of pushing “misinformation on America” on Thursday as the GOP lawmaker was defending his previous attacks against the Ukrainian president.

There’s no evidence Zelensky’s been spreading misinformation about Russia’s assault on his country.

Sen. Lindsey Graham (R-SC) claimed that Rep. Madison Cawthorn (R-NC) is an outlier “in the largest sense possible on our side.”

Republican state senators in Georgia have introduced their own version of Florida’s “Don’t Say Gay” bill that would make it illegal for teachers to “promote, compel, or encourage classroom discussion of sexual orientation or gender identity in primary grade levels or in a manner that is not appropriate for the age and developmental stage of the student.”

The measure is unlikely to pass given that it was introduced this late in the legislative session (right after Florida’s GOP-controlled legislature passed its bill on Tuesday, in fact), as the Atlanta Journal-Constitution notes. But that’s obviously not going to stop it from getting brought up again later down the road.

The bill also takes aim at “critical theory” being taught in schools, an efficient way to make sure all the GOP’s “anti-wokeness” bases are covered in one strike (not clear why it’s not the full “critical race theory” though).

Two of the bill’s 10 co-sponsors are running for higher office, including lieutenant governor.

“Republican lawmakers who control the state Legislature on Tuesday ignored the Democratic governor’s call to convene a special legislative session to take up legislation that would have given each Wisconsin resident $150,” the Milwaukee Journal Sentinel reports.  “Senate President Chris Kapenga (R) and Assembly Speaker Pro Tempore Tyler August (R) quickly gaveled in and gaveled out of the session Evers ordered to begin Tuesday.”

“A handful of House Republicans are beginning to jockey behind the scenes for the No. 3 leadership role next year, an early signal of Kevin McCarthy’s firming grip on the speakership in a future GOP majority,” Politico reports.  “As it stands, McCarthy is set to claim the gavel uncontested if Republicans win back the House in November, a widely favored possibility. And that leaves current House Minority Whip Steve Scalise poised to become majority leader without an opponent, creating a rare opening in the whip’s spot — and a potential race that could draw multiple contenders.”

“Since the U.S. government first marshaled its historic economic response to the coronavirus pandemic, the Justice Department has uncovered a vast array of alleged fraud, resulting in charges and investigations involving more than $8 billion in federal aid,” the Washington Post reports.  “The extent of the fraud alleged and uncovered by the Justice Department is vast, touching nearly every major facet of the roughly $6 trillion that Congress adopted over a two-year period to support families, workers and businesses.”

“The Ukrainian Anonymous hacker group has hacked into Roskomnadzor, the Russian federal agency responsible for monitoring and censoring media, and released 360,000 files,” the Jerusalem Post reports.  “Among the censored documents released by Anonymous, some of which are dated as late as March 5, are ones that show Moscow censored anything that referred to the war as a Russian invasion of Ukraine.”

“The 2020 census undercounted the country’s population by 18.8 million people, the Census Bureau said, acknowledging that the count had underrepresented Black, Latino and Indigenous residents,” the New York Times reports.  “At the same time, the census overcounted the number of white and Asian residents.”