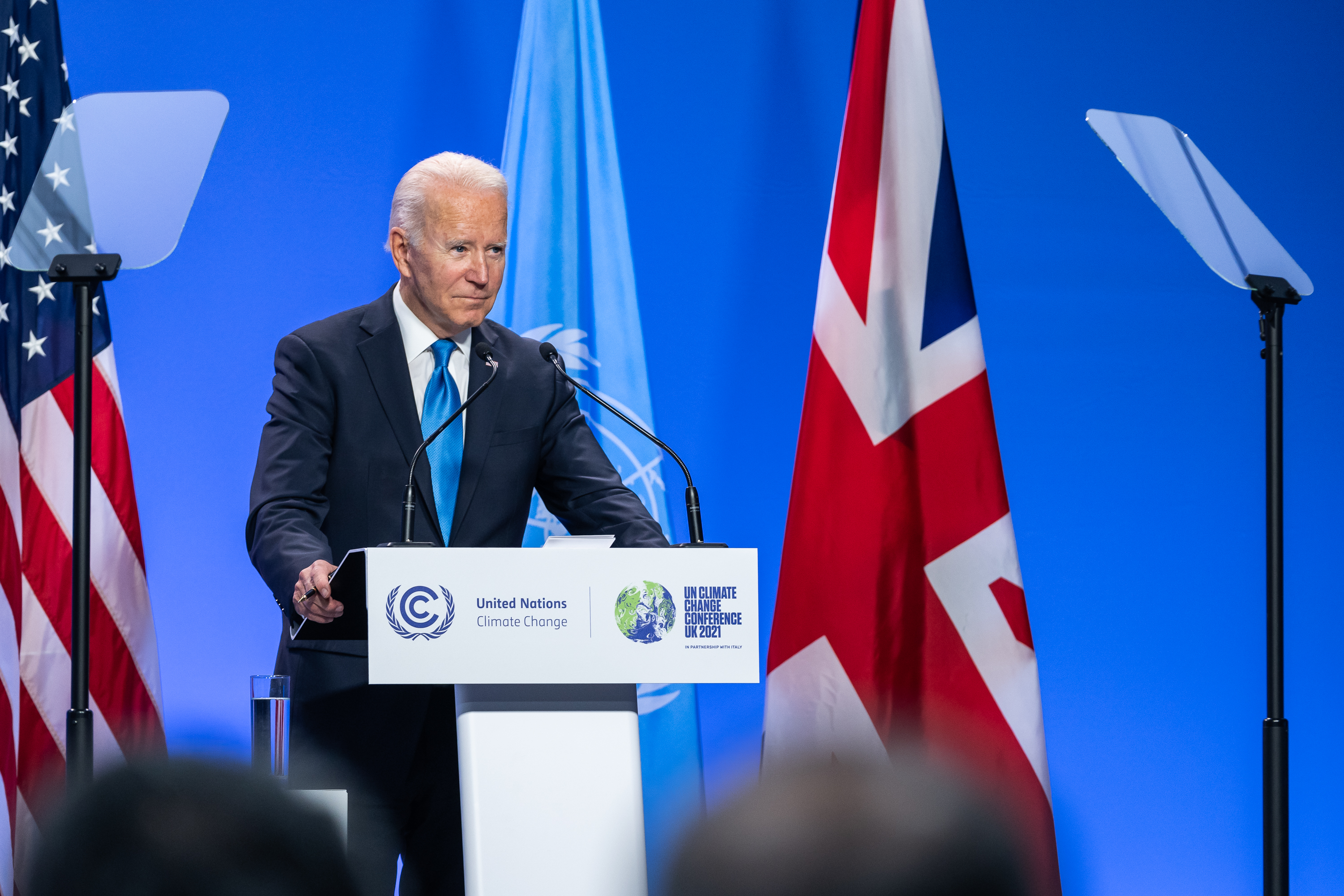 A new Wall Street Journal poll finds that 79% of Americans said they favored a ban on Russian oil imports even if the prohibition increased energy prices in the U.S. Just 13% said they opposed it.

A new Fox News poll in Georgia finds Gov. Brian Kemp (R) leading primary challenger David Perdue, who was endorsed by Donald Trump, 50% to 39%. Just 10% are unsure or would vote for someone else.

A Fox News poll in Pennsylvania finds David McCormick (R) leading Dr. Mehmet Oz in the GOP Senate primary, 24% to 15%.  Others receive support in the single digits, including Kathy Barnette and Jeff Bartos (9% each), and Carla Sands (6%). Nearly one-third (31%) are unsure which candidate they will support in the May 17 primary.

Donald Trump’s assertions that Russian president Vladimir Putin was “savvy” and his invasion of Ukraine was “genius” were quickly condemned by politicians on both sides of the aisle.

But political science has consistently shown that the political opinions of voters are directly influenced by cues from political leaders.

A new YouGov survey finds that when respondents are given statements about the Ukraine war, their opinions change if told they were made by Trump

A similar pattern emerges for the statement “Vladimir Putin is very savvy”: Republicans are 10 percentage points less likely to say this does “not at all” match their opinion when the statement is attributed to Trump than when it is not.

Similarly, and not surprisingly, Democrats are much more likely to disagree with statements attributed to Trump.

That doesn’t mean that Trump’s views on Ukraine are held by the majority of Americans — they are not. That’s why many Republican lawmakers quickly backed away from Trump after he made these remarks.

But it shows how Trump’s views still impact how many Americans think about the war.

Sen. Ron Johnson (R-WI) told Breitbart News Radio on Monday that Republicans should come up with a plan to kill Obamacare again if they take control of Congress and the White House in 2024.

“Newly released records show taxpayers picked up the cost of sending former Supreme Court justice Michael Gableman to address a Republican Party county chapter, where he promoted his partisan review of the 2020 election and called on one of his loudest critics to resign from office,” the Milwaukee Journal Sentinel reports.

Former Vice President Mike Pence would not rule out a presidential bid in 2024 during a Fox Business interview, saying that he and his family will “consider how we might participate in that process” after the 2022 midterm elections.

Mike Pence met with Miriam Adelson, the influential GOP megadonor, at her home in Jerusalem on Monday night, just hours after he had touched down in Israel for a multi-day trip through the Middle East, Jewish Insider reports.

“Republican Senate candidate Herschel Walker indicated he won’t debate his GOP rivals. Gov. Brian Kemp chastised David Perdue, his main primary challenger, for not yet committing to a series of showdowns ahead of their May 24 matchup,” the Atlanta Journal Constitution reports.

“While Stacey Abrams and U.S. Sen. Raphael Warnock have avoided serious Democratic opposition, the intense GOP competition has created a divide among top candidates over whether to take part in debates.”

“Seven months after former Gov. Andrew Cuomo (D) resigned in disgrace amid accusations of sexual harassment and the threat of impeachment, he is now moving aggressively to chart a path back to public life,” the New York Times reports.

“He is still out of a job and still politically isolated, following one of the most stunning collapses in modern American political history.”

“But in recent weeks, his campaign account has funded advertising that casts him as the victim of politically motivated ‘attacks.’ He inveighed against ‘cancel culture’ during an appearance at a Black church in Brooklyn on Sunday. And he has made headlines for dining with prominent figures including former Gov. Chris Christie, Republican of New Jersey, and Mayor Eric Adams of New York City.”

“After losing her earliest races as a mainstream Republican, she moved farther and farther right until she beat an incumbent by campaigning as the more conservative choice. Now, after a year of fanning bogus allegations about election fraud and other false claims, she is the most successful fundraiser in the Arizona state legislature.”

“She raised nearly $2.5 million in 2021, outraising even statewide candidates for governor, attorney general and secretary of state… Nearly $2 million of that money came from small donations from outside Arizona as she traveled the U.S. calling for the 2020 election to be overturned and demanding audits of the vote without credible evidence of fraud.”

Robert Regan (R), who is favored to win a seat in the Michigan House, said he tells his daughters to “just lie back and enjoy it” if they are raped, the Washington Post reports.

Said Regan: “I tell my daughters, ‘Well, if rape is inevitable, you should just lie back and enjoy it.’”

One of Regan’s daughters urged voters not to elect him to office two years ago.

OKLAHOMA U.S. SENATOR B. Republican Alex Gray, who served as a Trump staffer on the White House National Security Council, has filed with the FEC for a potential Senate bid.

MARYLAND GOVERNOR. Former nonprofit head Wes Moore earned an endorsement over the weekend from Prince George’s County Executive Angela Alsobrooks, who leads a populous and very blue community in the D.C. suburbs, ahead of the June Democratic primary.

PENNSYLVANIA GOVERNOR. Bill McSwain is running a joint TV ad for the GOP primary with the well-funded Commonwealth Leaders Fund that shows him enthusiastically standing with Donald Trump and exclaiming, “As President Trump’s U.S. attorney, I took down corrupt public officials.” Well, the version running on Fox does: As the Philadelphia Inquirer points out, the one airing on broadcast TV notably lacks that Trump photo.

NEW YORK GOVERNOR and ATTORNEY GENERAL. The Daily News briefly caught up with Andrew Cuomo on Thursday as he left a Manhattan lunch with another ex-governor, Chris Christie, and asked him whether he was considering a bid for state attorney general, to which Cuomo replied, “No.” However, a group called “Friends of Cuomo” that’s apparently setting the stage for some sort of comeback has now spent $1.3 million on TV ads trying to rehabilitate the disgraced former leader, including a spot that cites a professional misconduct complaint Cuomo supposedly plans to file against Attorney General Tish James that misleadingly tries to frame its claims that she engaged in “witness tampering and perjury” as facts reported by “CBS News.” Not so: The outlet simply published a story about Cuomo’s allegations and did not confirm them.

GEORGIA GOVERNOR. A new poll of Georgia’s Republican primary for governor from Fox5 Atlanta, conducted by the GOP firm InsiderAdvantage, shows former Sen. David Perdue gaining ground on incumbent Brian Kemp. In this latest survey, Kemp leads 44-35, which is a considerably smaller margin than the 41-22 advantage he enjoyed when InsiderAdvantage last checked in on the race in December.

Since that time, however, former state Rep. Vernon Jones abandoned his bid and opted to run for the House instead at the behest of Donald Trump, who orchestrated the move in order to boost Perdue. It may be working, as the bulk of Jones’ support, which stood at 11% in the previous poll, has now gone to Perdue.

ARIZONA GOVERNOR. A consulting firm run by businessman Marco López received $35,000 in payments from former Mexican President Enrique Peña Nieto’s successful 2012 campaign that allegedly originated with a multimillion-dollar bribe from a Brazilian construction firm, according to documents obtained by a Mexican news organization and reported by the newsletter Arizona Agenda. That firm, Odebrecht, admitted in 2016 to running a nearly $800 million bribery scheme across Latin America, which included, says a former top Peña Nieto staffer named Emilio Lozoya, a $3 million payoff to the campaign “in exchange for an agreement for future inflated public works contracts,” per the tipsheet.

Lozoya, who has been cooperating with Mexican authorities, further says that payments to López and other consultants were concealed by having the consultants make out invoices for work on made-up mining ventures in South America; one document Lozoya provided to investigators shows an invoice from López’s firm (known both as Intermestic Partners and International Strategic Solutions) seeking remuneration for something called the “Colombia Project.” The $35,000 López received came from a Swiss bank account held by Latin America Asia Capital Holdings, a shell company run by Lozoya out of the British Virgin Islands, documents show.

López, who is seeking the Democratic nod for governor, declined to answer questions put to him by the Arizona Agenda, including what exactly the Colombia Project was, and whether he knew that Odebrecht’s bribe money was the source of the funds used to pay his company, as Lozoya has alleged. López did, however, deny all wrongdoing to the Arizona Republic, and he has not been charged with any crimes.

Separately, on the Republican side, former TV anchor and current far-right conspiracy theorist Kari Lake has picked up the backing of Rep. Paul Gosar, who has a long, ugly, and ongoing history of ties to prominent white supremacists.

UTAH U.S. SENATOR. Candidate filing closed Friday for Utah’s June 28 primary, and the state has a list of contenders here. Filing alone, however, isn’t sufficient to make it on the ballot: candidates must also either turn in the requisite number of signatures by April 9 or win enough support at their state party convention on April 23, though they can also try both methods. If no one wins at least 60% of the support of the convention delegates, then the two contenders with the most votes advance to the primary.

Because Republicans gerrymandered the competitive 4th Congressional District, the only major race in the state this year is the Senate contest, where Republican incumbent Mike Lee, who has unsuccessfully pushed for a constitutional amendment to limit senators to two terms in office, is seeking a third.

Six fellow Republicans have filed to take him on, and the two who have attracted the most attention are nanotechnology firm executive Ally Isom and former state Rep. Becky Edwards. Isom and Edwards, who like Lee are pursuing both routes to the ballot, are hoping to rally the state’s vocal contingent of anti-Trump Republicans against the incumbent, but they face a very difficult battle. A recent primary poll from the Republican firm OH Predictive Insights showed Lee defeating Edwards in a 51-5 landslide, and it doesn’t help that both challengers are aiming for the same group of voters.

The general election is potentially more interesting, though Lee is still the heavy favorite in this very red state. Lee’s most notable opponent is independent Evan McMullin, who took 21% of the vote in Utah when he ran for president in 2016 as an anti-Trump Republican and has support from some prominent Democrats: Former Rep. Ben McAdams endorsed McMullin last year, while Salt Lake County Mayor Jenny Wilson, who was Team Blue’s 2018 nominee for the other Senate seat, just backed him on Monday. OH Predictive Insights recently found Lee beating McMullin 34-24 while Kael Weston, who is the only Democrat in the race, took 12%. Three other third-party candidates have also filed.