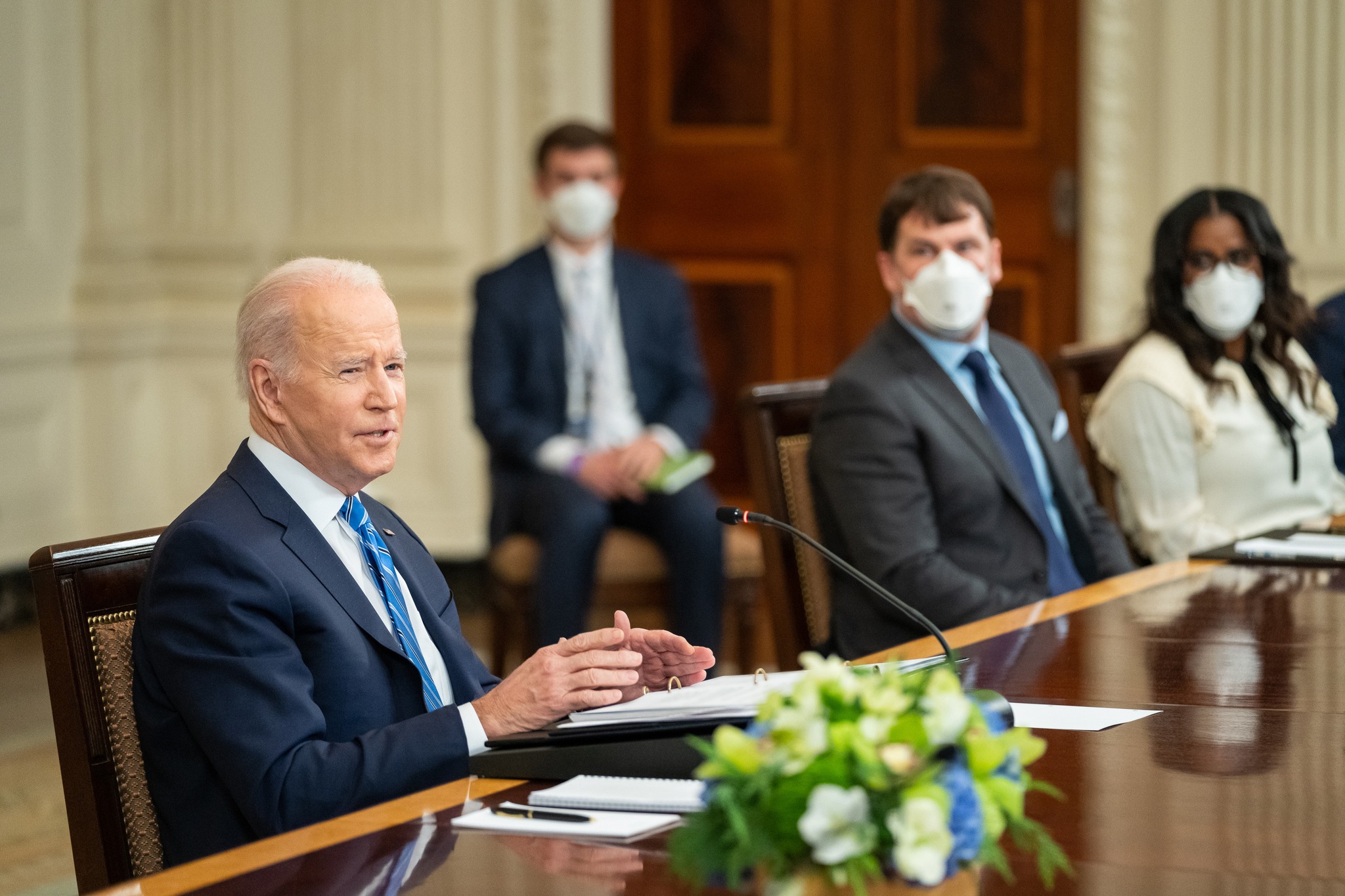 A new Des Moines Register/Mediacom Iowa Poll finds Gov. Kim Reynolds (R) leading challenger Deidre DeJear (D) in the race for Iowa governor, 51% to 43% with 5% undecided. While that’s not great news for Democrats in a state that Barack Obama won in 2008 and 2012, it’s not great news for Republicans either.

That’s because in a midterm election year that’s supposed to be bad for Democrats, Reynolds holds just an 8-percentage point lead. That’s the exact same margin that Donald Trump won the state by in the 2020 presidential election.

Pollster Ann Selzer called the results “surprising” because DeJear has very low name recognition across the state. Just 31% of Iowans know her well enough to rate their feelings about her. Selzer said she would have expected a greater percentage of people to say they weren’t sure who they would vote for in November, given DeJear’s low visibility. Said Selzer: “It just says that people are voting on party, really.”

So if DeJear is really just a proxy for the Democratic vote share, that suggests that — at least in Iowa and in this one poll — Republicans haven’t improved their position at all since the 2020 election.

TEXAS ATTORNEY GENERAL. “The race for Texas attorney general is asking Republicans to determine how many indictments and allegations of corruption are too many. The answer may be there is no limit — so long as the candidate has an endorsement from former President Donald Trump,” the New York Times reports.

“Ken Paxton, the Trump-backed attorney general, was indicted and arrested on criminal securities-fraud charges that are still pending. He has faced calls for his resignation after several of his top aides claimed he abused his office by helping a wealthy donor. And he has been serving as the state’s top lawyer while under threat of a possible new indictment, as the F.B.I. investigates the abuse-of-office and bribery accusations.”

Former New York Gov. Andrew Cuomo (D), who resigned last year amid multiple accusations of workplace sexual misconduct, spoke out in public about his exit from office for the first time on Sunday and blamed “the cancel culture mentality” for his decision to leave, The Hill reports.

Said Cuomo: “With cancel culture, we now live in a frightening new world where any accusation can trigger condemnation without facts, without due process. We are a nation of laws – not a nation of Tweets. Social media and Twitter spread cancel culture like a virus. They allow the extreme minority to overpower the reasonable majority.”

“As the prospect of a red wave grows, a series of Republican missteps including recruiting stumbles, weak fundraising and intense infighting is threatening the GOP’s path to the Senate majority,” the AP reports.

“Republican candidates in Arizona, Georgia and Nevada are struggling to keep pace with Democratic fundraising. Recruiting failures have dashed GOP hopes in reach states like Maryland and threaten a prime pickup opportunity in New Hampshire. And a recent plan that would raise taxes on low-income Americans and seniors, released by the Republican Senate midterm chief, Florida Sen. Rick Scott, is putting GOP candidates in a difficult position across states like Wisconsin, Ohio and Florida.”

“With Democrats confronting historic headwinds and the weight of an unpopular president, a Republican Senate majority is easily within reach. But, sensing discord within the GOP, Democrats are suddenly optimistic they may have a path to hold — or even expand — their majority.”

TEXAS GOVERNOR. “After clinching the Democratic nomination for Texas governor, Beto O’Rourke took the stage and made a promise that could possibly define his fall campaign,” KCEN reports.  Said O’Rourke: “And don’t you think it’s time we legalize marijuana in the state of Texas? I do too. We can get that done.”

Republican National Committee chair Ronna McDaniel sent a letter to the Committee on Presidential Debates (CPD) telling the organization not to fundraise off potential GOP participation in the 2024 CPD-sponsored debates, the Wall Street Journal reported on Thursday.  McDaniel also told the organization that she was sure that the RNC’s proposed resolution requiring its presidential candidates to pledge not to participate in CPD-sponsored debates would pass “overwhelmingly” when it gets put to a vote later this year.

It’s an escalation of the RNC’s war on the CPD prompted by Trump’s whining that the debates were rigged against him. McDaniel is also mad that the CPD changed one of the 2020 debates to a virtual format, a decision the organization made because Trump had come down with COVID-19.

“Reps. Marjorie Taylor Greene and Lauren Boebert are two backbench freshmen in the House minority, powerless in the official hierarchy and unlikely to gain much power even in a likely Republican majority next year,” the New York Times reports.

“But their antics, violations of decorum and association with white nationalists have elevated their profile far beyond their positions, and Democratic operatives are determined to make them the face of the Republican Party in the looming election season.”

“Greitens has staunchly aligned himself with the former president, become a favorite of the pro-Trump media universe, and distinguished himself as one of the few Republican Senate candidates willing to speak out against McConnell. Now, Trump, who in the past has privately criticized the former governor over the scandal that led to his downfall, is telling people he’s open to endorsing Greitens — despite fears among other powerful Republicans that the Missouri Republican is the only GOP candidate who could potentially lose the seat in November.”

ALASKA. “The commission charged with enforcing Alaska’s campaign finance laws has lifted all limits on donations to candidates for governor, state legislative seats and municipal races — a decision that could allow a huge wave of cash to flow into Anchorage elections next month and state elections in August,” the Anchorage Daily News reports.

MAINE GOVERNOR. Former Maine Gov. Paul LePage (R) “often made headlines but not always for not the right reasons” during his eight years in office but told WCSH that the time away from office has changed him and that’s why he’s running for governor again.

Said LePage: “The big change in me has been the last four years watching what’s going on in the country. I am absolutely convinced that if we continue to hate each other, if we don’t find a path to at least like each other and respect each other, our country is in for doom. Our constitution will not survive. We need to find a path to have civil discourse so we can talk both sides of the argument.”

NORTH CAROLINA U.S. SENATOR. While there were plenty of late developments in North Carolina’s U.S. House races, the contest to succeed retiring Republican Sen. Richard Burr in this light-red state has been stable for some time. The Democratic field features 11 different candidates, but former state Supreme Court Chief Justice Cheri Beasley is the only one running a serious campaign. Beasley, who would be the first Black woman to represent the state in the upper chamber, ended 2021 with $2.82 million in the bank.

There’s far more action in the 14-way Republican primary, where Rep. Ted Budd and former Gov. Pat McCrory have been going at it for some time. Budd has the endorsement of Donald Trump and has already benefited from millions in spending from the radical anti-tax Club for Growth, but Politico reported in late January that the GOP leader was “starting to have regrets” about supporting the congressman after seeing bad poll numbers. Trump, though, went on to reiterate he was still for Budd, and he’s shown no indication he’s wavering. Budd finished last year with a small $2.23 million to $1.95 million cash-on-hand lead over McCrory, who narrowly lost re-election in 2016 to Democrat Roy Cooper.

The field also includes two other notable Republicans who have struggled to gain traction. Former Rep. Mark Walker, who shares a similar hardline profile as Budd, stayed in the Senate race even though Trump offered to endorse him if he instead tried to return to the House, but he had a mere $572,000 available. (Trump himself reportedly told an RNC donor retreat on Saturday, “We’ve got to get Walker out of that race.”) Businesswoman Marjorie Eastman had an even smaller $287,000 war chest, but a super PAC called Restore Common Sense spent about $1 million on digital and radio ads to help her in January.

PENNSYLVANIA U.S. SENATOR and GOVERNOR. The Republican pollster TargetPoint, on behalf of the conservative Free Beacon, has conducted a new survey of Pennsylvania’s GOP Senate primary and finds rich guy David McCormick leading TV personality Mehmet Oz 25-19, while Carla Sands, a former Trump ambassador to Denmark, takes 11%. In the battle for the Republican gubernatorial nomination, meanwhile, former Rep. Lou Barletta has a 17-14 edge over state Sen. Doug Mastriano, with all others in single digits. In both races, a plurality of voters said they were undecided or preferred some unnamed candidate.