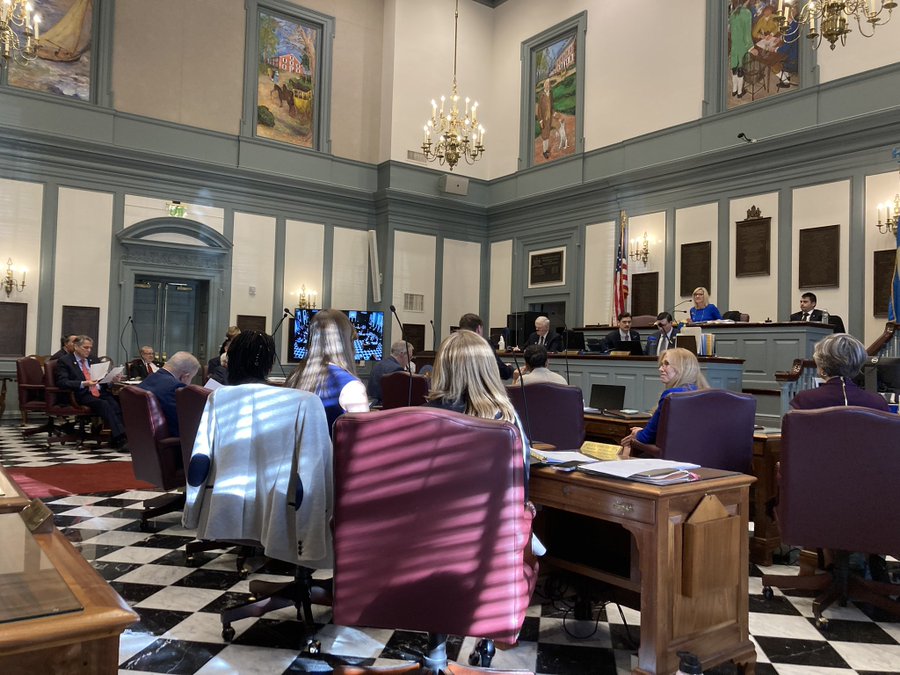 All Senate Democrats voted yes on the passage of the Healthy Delaware Families Act, or Senate Bill 1(S) today, while all Senate Republicans voted no. Once again Democrats prove that we are working to make your and your family’s life easier, and Republicans could give two shits about you and your family.

Once fully implemented, The Healthy Delaware Families Act would provide eligible full-time workers in Delaware with up to 12 weeks of paid parental leave a year, and up to 6 weeks of paid family caregiving leave, paid medical leave or paid military leave every two years.

Workers forced to take extended time off from work due to a major family or medical event will be able to earn up to 80% of their average weekly wages through the state insurance program created by the Act.

The federal Family and Medical Leave Act currently provides some workers with job protections when they need extended absences of work for medical and family reasons. But workers are not guaranteed any pay during those 12 weeks, and a significant portion of Delaware’s workforce receives no protections at all under the law.

Fewer than 1 in 5 workers nationwide has access to paid family leave through their employer – a lack of financial security that costs working families in the United States about $22.5 billion in lost wages each year.

In Delaware, nearly 60% of workers do not have access to even unpaid leave under the federal Family and Medical Leave Act.  Women – particularly women of color – tend to suffer the most serious consequences, with 82% of Black mothers, 56% of Latina mothers and 48% of white mothers being the primary breadwinners in their households.

According to at least one survey, 1 in 4 working women who give birth return to work within two weeks because they cannot afford to go any longer without pay. Meanwhile, the vast majority of low-wage earners have zero access to paid leave, meaning they are often forced to leave the workforce when they develop serious health conditions, have a seriously ill family member or become parents.

The Healthy Delaware Families Act would provide an affordable solution to alleviate those financial pressures and unlock the economic potential of Delaware’s working families.

More than 50 Delaware-based organizations also have called on the General Assembly to pass paid family and medical leave legislation, including the Delaware chapters of the AARP, the League of Women Voters, the American College of Obstetricians and Gynecologists, the National Alliance on Mental Illness, the National Coalition of 100 Black Women, the Delaware Nurses Association, as well as local labor unions, congregations, businesses, and many other groups.

The Healthy Delaware Families Act now heads to the Delaware House of Representatives for final consideration.

“Today marks a historic milestone in our fight to make sure working families in Delaware are never again forced to make an impossible choice between earning a paycheck and staying home to welcome a newborn or provide care for a family member fighting for their life,” said Sen. Sarah McBride, the prime sponsor of The Health Delaware Families Act.

“This legislation, crafted through good-faith negotiations, reflects both real compromise and one of the most impactful new employment benefits in our state’s history,” she said. “I’m grateful for the unanimous support from my Democratic colleagues in the Senate and I look forward to working with my friend and co-sponsor Rep. Debra Heffernan as she leads the way to get The Healthy Delaware Families Act to passage in the House.”

“Delaware set the example by becoming one of the first states to establish paid parental leave for state employees and teachers. Now we’re poised to take another step toward ensuring private workers in Delaware also have access to paid family and medical leave,” said Rep. Heffernan, D-Bellefonte. “Our parental leave program has been an undeniable success, improving the health and wellbeing of families while boosting state employee recruitment and retention. As we did before in creating a program for state workers, Delaware must again lead on leave. I’m looking forward to getting the Healthy Delaware Families Act across the finish line in the House.”

“The reality is that many of us will have to step away from our work to welcome a new family member, recover from an illness, or care for our loved ones. Unfortunately, without a safety net like paid leave, workers are left to deal with these life-altering events without job security or financial stability,” House Majority Leader Valerie Longhurst said. “We need a comprehensive paid family and medical leave program here in Delaware so that workers can meet their urgent personal and family needs without fearing the loss of a job or missing a paycheck. The Healthy Delaware Families Act will be that lifeline to countless residents, so people don’t have to live in fear of falling behind financially when there is a birth or illness in the family.”

“We should do everything we can to support businesses and the employees who work there,” said Governor John Carney. “Younger workers aren’t just looking for a job; they’re looking for a way of life. This legislation builds on the work we’ve done for state employees and extends paid leave into the private sector. It’s the right thing to do, and it will help attract a talented workforce to live, work, and raise their families in Delaware. Thank you to members of the Senate for passing this legislation, and to Senator McBride for her leadership on this important issue.”