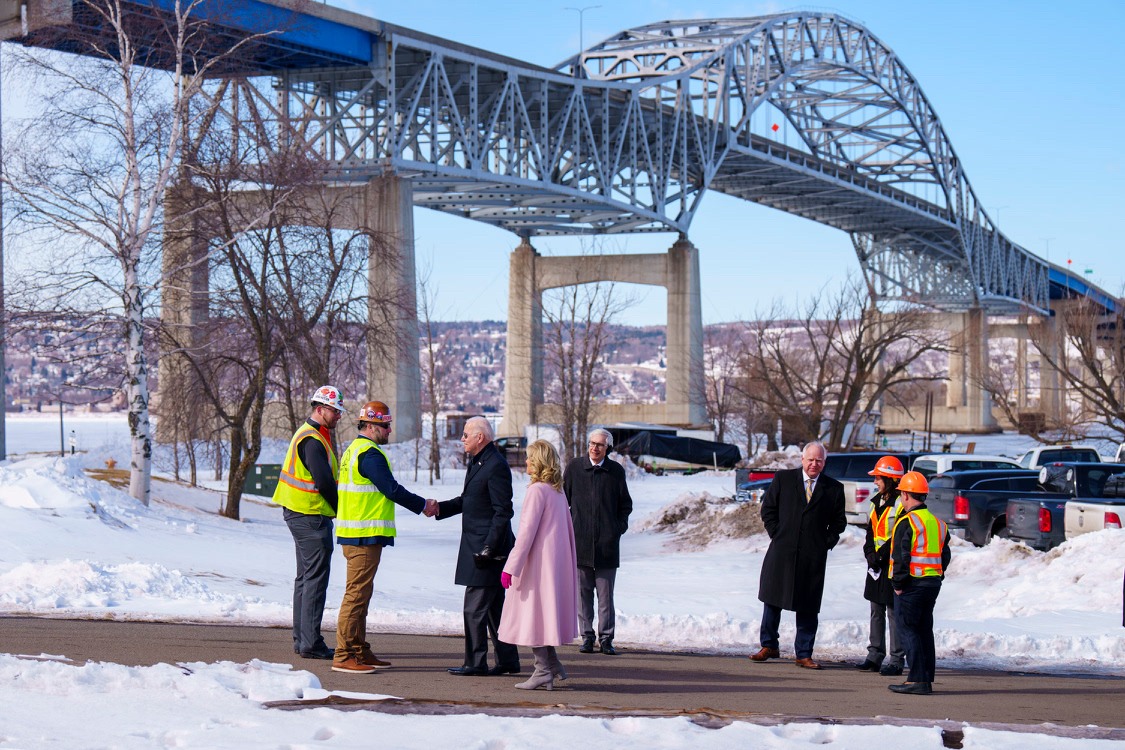 Aaron Rupar: “It feels like ancient history now, but it was barely two years ago that every Republican in Congress (with the exception of Mitt Romney) stood by Donald Trump after he was caught in the act of trying to disarm Ukraine.”

“Now, in their desperation to spin Russia’s brutal attack on Ukraine into a political attack on President Biden, some of those very same Republicans are hoping you suffer from a case of amnesia about the circumstances surrounding Trump’s first impeachment — which took place after Trump used nearly $400 million in military aid to try to extort Ukrainian President Volodymyr Zelensky’s government into coming up with dirt on the Bidens. And it’s worth remembering that military aid was desperately needed by Ukraine because the country has been at war with Russia since 2014.”

Although Donald Trump quickly praised the power of his endorsements in yesterday’s Texas primaries, Philip Bump notes he “glosses over” some pretty important qualifiers:

The point is that Trump endorses candidates who are obviously going to win and then uses those victories to hold himself up as a kingmaker. There are dozens of primaries in the coming months where Trump’s record will be tested. Until then, there have been other indications that Trump’s grip on the Republican base may be slipping.

In December, Trump loudly defended vaccines at a speech but then abruptly stopped talking about them after GOP factions erupted in anger and confusion. Just last week, Trump praised Russian president Vladimir Putin last week as a “genius” for his “very savvy” move of invading Ukraine. But within days he tried to walk it back when he discovered many Republicans were appalled.

And just today, we learned that Trump’s new social media company — which was supposed to attract millions of users — is actually a bust so far. Trump himself isn’t even using it. If you’re an anti-Trump Republican, these are hopeful signs the former president’s stranglehold on the GOP might actually be weakening.

WISCONSIN U.S. SENATOR. Milwaukee Bucks executive Alex Lasry has released a poll from Normington Petts that shows him trailing Lt. Gov. Mandela Barnes 35-27 in the August Democratic primary, while everyone else remains mired in the single digits. The memo includes numbers from unreleased surveys to argue that Lasry has dramatically shrunk what was a 43-4 deficit last August as he’s gotten his name out. The last poll we saw was a December Impact Research internal for Barnes that had him leading Lasry 40-11.

“I’m not going to change how I feel. I’m not going to stop saying defund the police at all.”  — Rep. Cori Bush (D-MO), quoted by the Associated Press, responding to President Biden’s State of the Union address.

“He’s generally more optimistic than I am… It’s a good thing! He likes people more than I like people.” — Sen. Bernie Sanders (I-VT), on The Late Show with Stephen Colbert, comparing his outlook to President Biden.

NORTH CAROLINA 11TH CD. The North Carolina voters who mounted a legal challenge against far-right Rep. Madison Cawthorn’s (R-NC) candidacy are starting over after the North Carolina State Board of Elections pulled the plug on their first attempt last week.

Two voters who live in the district Cawthorn’s running in, North Carolina’s 11th Congressional District, initiated a new lawsuit on Wednesday. One of them is a former GOP county commissioner, according to Free Speech For People, the nonpartisan election reform group that’s been backing the challenges.

The elections board had decided that the first challenge was invalid after a North Carolina court established a new district map that moved the district Cawthorn was running in at the time (North Carolina’s 13th Congressional District) away from the voters who’d filed that lawsuit.

A brief summary of what happened during the first fight before it got shut down:

ARIZONA U.S. SENATOR. Arizona Gov. Doug Ducey (R) will not run for the U.S. Senate this year, “finally putting to rest whether he held aspirations for elected office this cycle,” the Arizona Republic reports.

Wealthy businessman Jim Lamon’s new spot for the August Republican primary rhetorically asks how Democratic incumbent Mark Kelly, who has only been in office since December of 2020, can run “to solve the problems you’ve created?” The only mention of Lamon is his brief appearance at the beginning giving his required approval to his commercial.

TEXAS 1ST CD. Smith County Judge Nathaniel Moran won 63% of the vote in the Republican primary to succeed Rep. Louie Gohmert, who gave up this safely red seat in northeast Texas to wage a failed bid for attorney general. Far behind in second place with 24% was Joe McDaniel, who lives far from the 1st District in Dallas.

TEXAS 4TH CD. Republican Rep. Pat Fallon ended up defeating former TV anchor Dan Thomas by an unimpressive 59-30 in this safely red seat in east Texas, though that was more than enough for him to win the primary outright. Thomas, who was fired in October as News 12 anchor for refusing to get vaccinated for what he claimed were health reasons, may have benefited from his existing name recognition even though he raised little for his campaign.

Fallon himself also was waging his very first congressional primary because party leaders awarded him the nod in 2020 when incumbent John Ratcliffe resigned after securing the nomination in order to become Trump’s director of national intelligence. The congressman only represents about 55% of this new seat, which may also explain why he didn’t do better.

TEXAS 8TH CD. With 65,000 votes counted in the 11-way Republican primary to succeed retiring Rep. Kevin Brady, retired Navy SEAL Morgan Luttrell is in first with 52%, a little over the majority he’d need to win this very expensive race outright, but the AP has not yet made a call. Political operative Christian Collins, who is a former Brady campaign manager, is well behind with 22%. This seat, which includes the northern Houston area and nearby rural counties, is safely red.

TEXAS 15TH CD. 2020 nominee Monica De La Cruz secured the Republican nod again with 57% of the vote in her bid to succeed Democratic Rep. Vicente Gonzalez, who decided to run for the considerably safer 34th District rather than defend a redrawn Rio Grande Valley constituency that would have favored Trump 51-48. De La Cruz sported endorsements from Donald Trump and House Minority Leader Kevin McCarthy, and she enjoyed a big financial lead over Mauro Garza, a self-funder who was a distant second with 15%.

On the Democratic side, Army veteran Ruben Ramirez, who has Gonzalez’s endorsement, took first with 28% of the vote. Businesswoman Michelle Vallejo edged out attorney John Rigney 20-19 for the second runoff spot, and Rigney conceded Wednesday afternoon.

TEXAS 23RD CD. Marine veteran John Lira beat social worker Priscilla Golden 56-44 in the Democratic primary, but national Democrats haven’t signaled much interest yet in his campaign to challenge freshman Republican Rep. Tony Gonzales. The GOP legislature extended Trump’s margin of victory in this west Texas seat from 50-48 to 53-46, and Lira so far has struggled with fundraising.

TEXAS 30TH CD. State Rep. Jasmine Crockett took first place in the nine-way Democratic primary with 48%, just below the majority she needed to win outright. Party operative Jane Hamilton secured second by defeating Cedar Hill Independent School District Trustee Keisha Lankford 17-8. Crockett has the backing of Rep. Eddie Bernice Johnson, who is retiring after 30 years representing a safely blue Dallas district, while two groups affiliated with the cryptocurrency industry together expended a massive $2.15 million to boost her. Hamilton, who didn’t benefit from any major outside spending, has the support of neighboring Rep. Marc Veasey and former Dallas Mayor Ron Kirk.

TEXAS 37TH CD. Rep. Lloyd Doggett had no trouble defeating Donna Imam, who lost to Republican Rep. John Carter in 2020 in the old 31st District, 79-18 in the Democratic primary for this safely blue seat centered around his longtime Austin base.

TEXAS 35TH CD. Former Austin City Council member Greg Casar took 61% of the vote in the Democratic primary for this open and safely blue seat, which the GOP once again gerrymandered to connect the Austin area with San Antonio by means of a pencil-thin corridor along Interstate 35; two other candidates, state Rep. Eddie Rodriguez and former San Antonio City Councilwoman Rebecca Viagran, were far behind with 16% each. Casar, who is a member of the Democratic Socialists of America, enjoyed the support of Mayor Steve Adler as well as a number of prominent national progressive organizations, and he also had a big financial edge over Rodriguez.

TEXAS ATTORNEY GENERAL. Land Commissioner George P. Bush spent the first hours of his Republican primary runoff campaign against scandal-plagued incumbent Ken Paxton by publicly appealing to Donald Trump to unendorse the attorney general ahead of the May 24 second round. The Texas Tribune’s Patrick Svitek relays that Bush, who is the son of Florida Gov. Jeb Bush, told conservative radio host Mark Davis that he wanted to “re-establish those lines of communication and say, ‘Look, Mr. President, I believe you made a mistake on this one.'” The Land Commissioner continued, “There’s great conservatives that have also won without the endorsement. I’m giving you a chance to reassess … because there’s a lot at stake here.”

Bush tried hard last year to win Trump’s support, a charm offensive that famously involved him creating beer koozies dissing his family: That merchandise depicted outlines of Bush and Trump shaking hands above a Trump quote reading, “This is the only Bush that likes me! This is the Bush that got it right. I like him.” But Trump soon demonstrated that he liked Paxton, who spearheaded an unsuccessful lawsuit aimed at overturning Joe Biden’s victory, a whole lot more by backing him for renomination.

CNN wrote all the way back in July that even Bush’s allies correctly predicted this would happen and “warned him not to publicly play up to the former President because Trump would once again take glee in embarrassing the Bush family.” One source even said then that “Trump endorsing Paxton is like Lucy and the football and Charlie Brown.” Bush, though, seems to be quite content to take more kicks at the pigskin.

Paxton, for his part, also previewed his runoff strategy against Bush earlier on Wednesday by telling Davis, “If conservatives unite … we can end the Bush dynasty.” The attorney general added that his opponent “has got personal issues too that I can bring up that I’ve never brought up. … I don’t want to do that.” Paxton didn’t hint what he meant, though he predicted that Bush “knows it’s gonna change the dynamic of the race.”

On the Democratic side, former ACLU attorney Rochelle Garza took first place in the primary with 43%, while the second runoff spot has not yet been decided. With 989,000 votes counted, former Galveston Mayor Joe Jaworski, who is the grandson of Watergate special prosecutor Leon Jaworski, held a tiny 19.6-19.5 edge over civil rights attorney Lee Merritt.