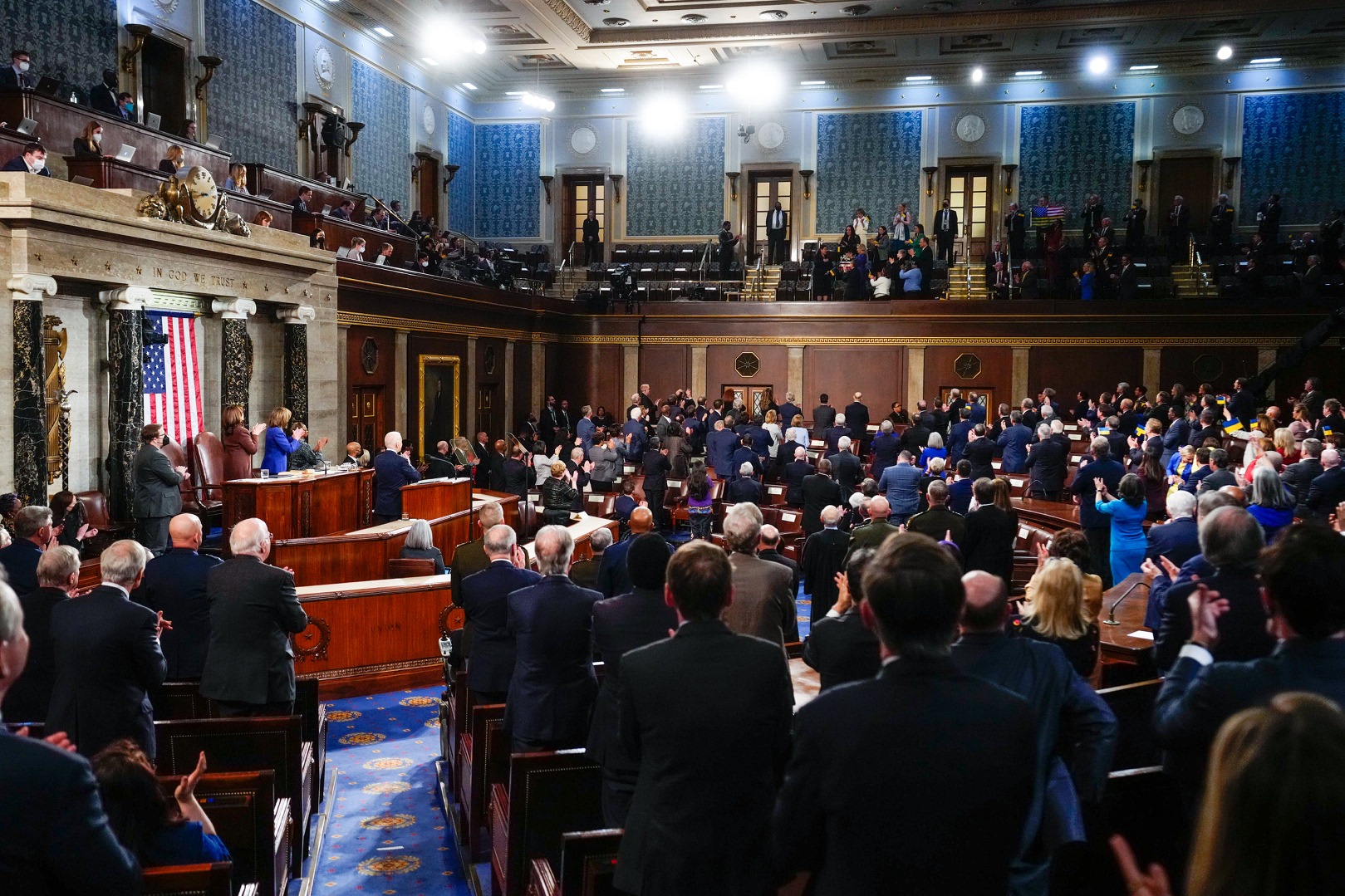 Playbook: “If he does block Russian oil, skyrocketing gas prices will go even higher. On Wednesday, crude oil prices reached their highest level in more than a decade, which will further inflate the cost of gasoline, already averaging $3.60 a gallon nationally. While Russian oil and gas makes up a tiny fraction of U.S. energy supply, choking off its energy products will likely send prices soaring even more.”

“That’s the last thing Biden wants, as inflation is already dragging down his poll numbers. It’s why he used his State of the Union to announce that the U.S. and other countries would release 60 million barrels of oil from reserves. It’s why desperate Hill Democrats looking toward the midterms are floating the idea of a gas tax holiday.”

“If he doesn’t block Russian oil and gas imports, Biden opens himself to allegations that he’s giving Putin precious breathing room. And the GOP is itching to pounce.”

Rep. Van Taylor (R-TX) allegedly paid $5,000 in hush money to an “ISIS bride” he was engaged in an affair with during his time in Congress, Breitbart News reports.  The story about the married congressman and father of three is quite graphic.

Taylor apologized for an affair with an ex-jihadist dubbed the “ISIS bride” and abruptly dropped his bid for a third term, the Dallas Morning News reports.  Said Taylor: “About a year ago, I made a horrible mistake that has caused deep hurt and pain among those I love most in this world. I had an affair, it was wrong, and it was the greatest failure of my life.”

Texas Tribune: “Taylor made the stunning announcement Wednesday, hours after he finished his five-way primary with 49% of the vote, just missing the cutoff for winning the primary outright.”

OHIO U.S. SENATOR. J.D. Vance’s allies at Protect Ohio Values have released a survey of the May Republican primary from Fabrizio Lee arguing that the group’s recent ad buys have helped stabilize Vance in the weeks since it found his campaign in a “precipitous decline.” The new numbers are below, with the January results in parentheses:

Businessman Bernie Moreno, who took 11% in January, dropped out of the race in the time between the two surveys.

“Donald Trump is blowing the launch of his new social media company, via a series of unforced errors,” Axios reports.  “The SPAC that agreed to take Truth Social public is valued at over $3.5 billion. At some point, investors will begin paying attention.”

OKLAHOMA U.S. SENATOR A and B. State Sen. Nathan Dahm has announced that he’s ending his longshot primary challenge to Republican Sen. James Lankford and will instead compete in the special election to replace outgoing Sen. Jim Inhofe. Lankford’s other intra-party foe, pastor Jackson Lahmeyer, has decided to keep campaigning against the incumbent, though like Dahm, he ended 2021 with little money. Meanwhile, Tulsa Mayor G.T. Bynum says he will not seek the GOP nod for any office in 2022.

MISSOURI U.S. SENATOR. Rep. Vicky Hartzler (R-MO), who is running for U.S. Senate candidate, was suspended from Twitter after tweeting about transgender women in sports saying they are “men pretending to be women,” Fox News reports.

CHICAGO MAYOR. “Former Secretary of Education Arne Duncan will not mount a bid to become mayor of Chicago in 2023, he said, ending months of speculation he helped stoke as he became increasingly critical of the incumbent,” The Hill reports.

FLORIDA 15TH CD. While former state Rep. Adam Hattersley showed some interest last year in making a second run for Florida’s 15th Congressional District, the Democrat announced this week that he’d instead run to unseat state Chief Financial Officer Jimmy Patronis, a Republican who has many of the duties that would belong to a treasurer or comptroller in other states. (The CFO is also the state fire marshal.)

FLORIDA 22ND CD. Democratic Rep. Ted Deutch tells the South Florida Sun-Sentinel that he plans to start his new job leading the American Jewish Committee on Oct. 1, which means he’ll be resigning sometime before then. Several fellow Democrats have already expressed interest in running to succeed him in what’s currently a 57-42 Biden seat, but state Sen. Tina Polsky says she’s not going to go for it.

However, while this will likely remain a solidly blue district after redistricting concludes, Republican state Rep. Chip LaMarca says he’s thinking about running here and says he’ll decide after the legislative session, which is set to conclude March 11.

Yanez, who is a retired firefighter, previously ran for Congress in 2010 against then-Rep. Candice Miller in a safely red seat (which was also numbered the 10th District) and lost the general election 72-26, but he bounced back two years later by winning a competitive state House district. He convincingly held on during the 2014 GOP wave and won his final term 54-46 even as Donald Trump was carrying his constituency 52-43, but he went on to lose a contested race in 2018 for a GOP-leaning state Senate district. Yanez’s time out of office was short, though, as he was appointed to a vacant seat on the Sterling Heights City Council months later and subsequently held it at the ballot box.

NORTH CAROLINA 13TH CD. State House Speaker Tim Moore said over the weekend that he would seek another term leading the chamber, a move that once and for all takes the Republican out of contention for Congress this cycle.

NEW YORK 4TH CD. Nassau County Legislator Carrié Solages, who has reportedly been considering a bid for New York’s open 4th Congressional District, recently filed FEC paperwork ahead of a possible campaign. In 2018, Solages pled guilty to charges of disorderly conduct after allegedly assaulting his girlfriend and was required to participate in a 26-week “batterer intervention program.”

NEW YORK 21ST CD. Former speedskater Bridie Farrell, who was a member of the U.S. national team, has dropped her bid against Republican Rep. Elise Stefanik “[a]fter reviewing the new district maps.” Democrats in the legislature made upstate New York’s 21st Congressional District even redder as part of their statewide gerrymander: Under the old lines, the 21st went for Donald Trump 54-44, but the new version would have voted for Trump 58-40.

OKLAHOMA 2ND CD. Republican Rep. Markwayne Mullin’s decision to run for the Senate sets off a race to succeed him at home in Oklahoma’s 2nd Congressional District, a seat in the eastern part of the state that Trump would have carried 76-22. This region, nicknamed “Little Dixie,” was relatively friendly turf for conservative Democrats through 2010, when Rep. Dan Boren easily won a fourth term during that year’s red wave, but those days are gone: Mullin decisively won the open seat race to replace the retiring Boren two years later, and the area has only become more hostile to Democrats since then.

There are plenty of Republicans who could get in ahead of the April filing deadline, and The Oklahoman mentions state House Speaker Charles McCall as a possibility.