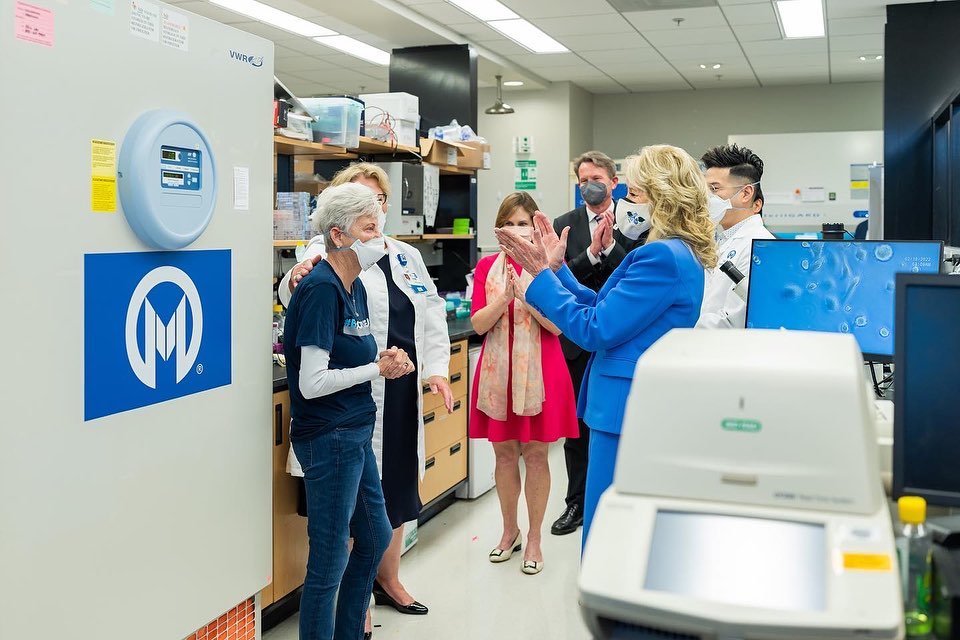 “The 2022 midterm elections officially kick off Tuesday in Texas, which will feature 38 congressional races, in addition to a handful of contested primaries for statewide office,” Politico reports. “Not all of those elections are competitive: 14 House incumbents have no primary opposition at all.”

Politico: What to watch for in Texas primaries.

We will be updating the results of these primaries throughout the rest of the week.

President Biden said last night in the State of the Union that we’re in “one of the strongest labor market recoveries in American history.” While that’s empirically true, a lot of Americans just don’t believe it, and that is the story behind Biden’s approval rating.

Furthermore, just 47% of “economically persuadable Americans” have heard about the economic legislative agenda proposed by President Biden and Democrats.

When they are told about the details, 60% support it.

Aaron Blake: “For the better part of five-plus years, Donald Trump attempted to inject some nuance into the GOP’s posture toward Russia. It was a partially a strategy of necessity — given how Russia’s 2016 election interference loomed over his presidency — and partially a symptom of both Trump’s penchant for provocation and admiration for authoritarians. But the result was the same: As Vladimir Putin inched toward an invasion of Ukraine, he had plenty of isolationists, conspiracy theorists, rationalizers and even apologists in prominent positions on the American right arguing for averting our eyes.”

“Their argument, though, has clearly run into reality and fallen badly out of favor. And many of those who downplayed or dismissed Russia’s threat have been forced to reckon with the rather black-and-white view that has now registered with the American people.”

New York Times: “Donald Trump’s brand of populism has been widely viewed as an appeal to white voters: Republicans around the country continue to exploit the fear that the left is attacking religious values and wants to replace traditional white American culture with nonwhite multiculturalism.”

“But similar grievances have resonated in the Rio Grande Valley in a profound way, driving the Republican Party’s successes in a Democratic stronghold where Hispanics make up more than 90 percent of the population.”

“The Trump-era anti-immigrant rhetoric of being tough on the border and building the wall has not repelled these voters from the Republican Party or struck them as anti-Hispanic bigotry. Instead, it has drawn them in.”

ARKANSAS U.S. SENATOR. Republican Sen. John Boozman’s new commercial for the May primary features a woman named Dee Engle telling the audience how her cousin “was murdered by an illegal immigrant in her own home.” Engle goes on to praise the incumbent “for fighting to get President Trump’s wall finished. The work Sen. Boozman’s doing will save many lives and families having to go through what our family’s gone through.”

MISSOURI U.S. SENATOR. Politico reports that Attorney General Eric Schmitt’s allies at Save Missouri Values are spending $500,000 on an ad campaign for him well ahead of the August Republican primary. The super PAC’s spot stars Texas Sen. Ted Cruz praising the attorney general for fighting the Biden administration and for standing up “to bureaucrats who mandated masks on our kids.” Cruz goes on to reference Schmitt’s role in an unsuccessful lawsuit to overturn Biden’s victory by declaring, “And when it mattered most, he fought to secure our elections.”

OKLAHOMA U.S. SENATOR RACES A AND B. Rep. Markwayne Mullin on Saturday announced he would enter the June primary to succeed Sen. James Inhofe, whose resignation takes effect at the end of this Congress. Mullin, who is a member of the Cherokee Nation, would be the first Native American to serve in the Senate since Ben Nighthorse Campbell, a Colorado Democrat-turned-Republican, retired in 2005. Mullin joins Luke Holland, who resigned as the senator’s chief of staff just before he launched his own bid with Inhofe’s endorsement.

The field may be about to attract another congressman, as Read Frontier Reese Gorman reports that Rep. Kevin Hern is “expected” to announce this week. Former state House Speaker T.W. Shannon, who lost the 2014 primary to now-Sen. James Lankford, also sounds very interested, saying, “In such a time as this my family and I are seeking God’s guidance on how our gifts and talents can best serve Oklahoma.” Pastor Jackson Lahmeyer, who is currently waging a longshot bid against Lankford, also confirms he’s thinking of switching races.

Mullin, for his part, ran a plumbing business when he first ran for office in 2012 to succeed retiring Democratic Rep. Dan Boren in the 2nd District in the eastern corner of the state. Mullin, who did some self-funding, outspent his many intra-party rivals and won the primary runoff 57-43, and he had no trouble in the general election in an ancestrally blue seat that was rapidly turning its back on the Democratic Party.

However, while Mullin pledged to serve just three terms in the House, he indicated in 2016 that he was interested in sticking around much longer. That didn’t sit well with former Sen. Tom Coburn, who endorsed Army veteran Jarrin Jackson in the primary; the challenger raised little money and didn’t come close to winning, but he held Mullin to an unimpressive 63-37 showing. The incumbent soon announced he would indeed seek a fourth term, and this time, he earned just 54% of the vote―just a few points above what he needed to avoid a runoff―while Jackson took 25%. Mullin, though, rebounded in 2020 with an 80-13 primary victory against state Sen. Joseph Silk.

PENNSYLVANIA U.S SENATOR. Lt. Gov. John Fetterman is running the very first TV ad of the May Democratic primary, a minute-long spot centered around his time leading the small western Pennsylvania community of Braddock. The narrator says of the candidate, “Moved to Braddock to start a GED program. A forgotten steel town. When two of his students were gunned down, John ran for mayor to stop the violence.” The commercial goes on to commend him for bringing “people hope” and calls him a “Democrat with backbone.”

Over in the GOP primary, which has already seen tens of millions in advertising, former hedge fund manager David McCormick’s allies at Honor Pennsylvania have publicized a poll from Osage Research showing him edging out TV personality Mehmet Oz 24-21, with former Ambassador to Denmark Carla Sands in third with 11%. Osage is a firm we’ve only seen numbers from once back in March of 2018 when it showed Patrick Morrisey narrowly ahead in the West Virginia Senate primary, a contest he’d win several weeks later (the general election didn’t go so well for him).

MARYLAND GOVERNOR. Former state Commerce Secretary Kelly Schulz’s first commercial for the June Republican primary, which Maryland Matters says is running on cable TV, features her standing in a classroom. After telling the audience she’s a mother, she says, “It’s why I introduced a Parental Bill of Rights—providing real school choice, record funding, and accountability, with education transparency. And of course, schools have to be open and masks off.”

Not so lucky was 2020 Senate nominee Mark Ronchetti, who took just 16%, but he says he’s submitted enough signatures to advance to the primary; far back in fifth was anti-abortion activist Ethel Maharg, who has attracted little attention. Ronchetti on his way out torched the convention as “just another example of a flawed process,” and even the other contenders agreed Saturday’s proceedings did not go well at all. The state GOP announced the results at 11 PM local time―which the Albuquerque Journal says was almost eight hours after the candidates were done speaking―after what a party spokesperson called “glitches” forced the almost 750 delegates to switch from electronic voting to paper ballots.

While the GOP argued that the delay in results was done in the name of “election integrity,” Dow said that some delegates left before the long voting process was done. State party chair Steve Pearce himself called the event “magnificent,” to which reporter Joe Monahan wrote, “The absurdity was not lost on his fellow Republicans and rumblings were heard expressing relief that Pearce’s tenure as chairman concludes at the end of the year.”

Ronchetti himself used his convention speech to tell delegates that, because he’d already collected enough signatures to advance, they should consider voting for one of the other candidates, saying, “And let’s get as many people on that ballot to take on Michelle Lujan Grisham as possible.” Block, though, argued that Ronchetti only made this appeal because he already knew he wouldn’t take at least 20% of the vote.

NEW YORK GOVERNOR and ATTORNEY GENERAL. Disgraced former Gov. Andrew Cuomo is using his millions in leftover campaign cash to launch what Ad Impact says is a $370,000 ad buy that features several anchors talking about how district attorneys have declined to prosecute him, with on-screen text concluding, “Political attacks won. And New Yorkers lost a proven leader.” The spot doesn’t tout Cuomo for any office, though it notably features one clip where TV host Dan Abrams says of Attorney General Tish James, “The New York state attorney general may have turned a blind eye to crucial details.”

IDAHO 2ND CD. Republican Rep. Mike Simpson has launched a 15-second negative ad against attorney Bryan Smith, who is seeking a rematch against the congressman eight years after losing their first bout 62-38. The narrator decries unnamed “false attacks” before saying of the challenger, “Smith got rich targeting veterans who can’t pay medical bills.”

ILLINOIS 6TH CD. Democratic Rep. Marie Newman has released a Victoria Research poll of her June primary matchup with fellow incumbent Sean Casten that shows the two tied at 37% apiece, with 26% undecided. These are the first numbers we’ve seen of the race.

NORTH CAROLINA 1ST CD. Rocky Mount Mayor Sandy Roberson is seeking the Republican nomination for an eastern North Carolina district that would have gone for Biden 53-46.

NORTH CAROLINA 13TH CD. Former Rep. Renee Ellmers has confirmed she’ll seek the Republican nod for the new 13th District, a suburban Raleigh constituency that would have favored Biden by a narrow 50-48 margin.

NEW YORKK 12TH CD. State Sen. Brad Hoylman, who recently didn’t rule out a primary challenge to longtime Democratic Rep. Carolyn Maloney, instead endorsed the incumbent at an event over the weekend.

TEXAS 3RD CD. The Texas Tribune reports that a group called Defeating Communism PAC recently disclosed $436,000 it spent against Republican Rep. Van Taylor in early February ahead of Tuesday’s primary. The congressman’s outside group allies have deployed $800,000 to defend him.