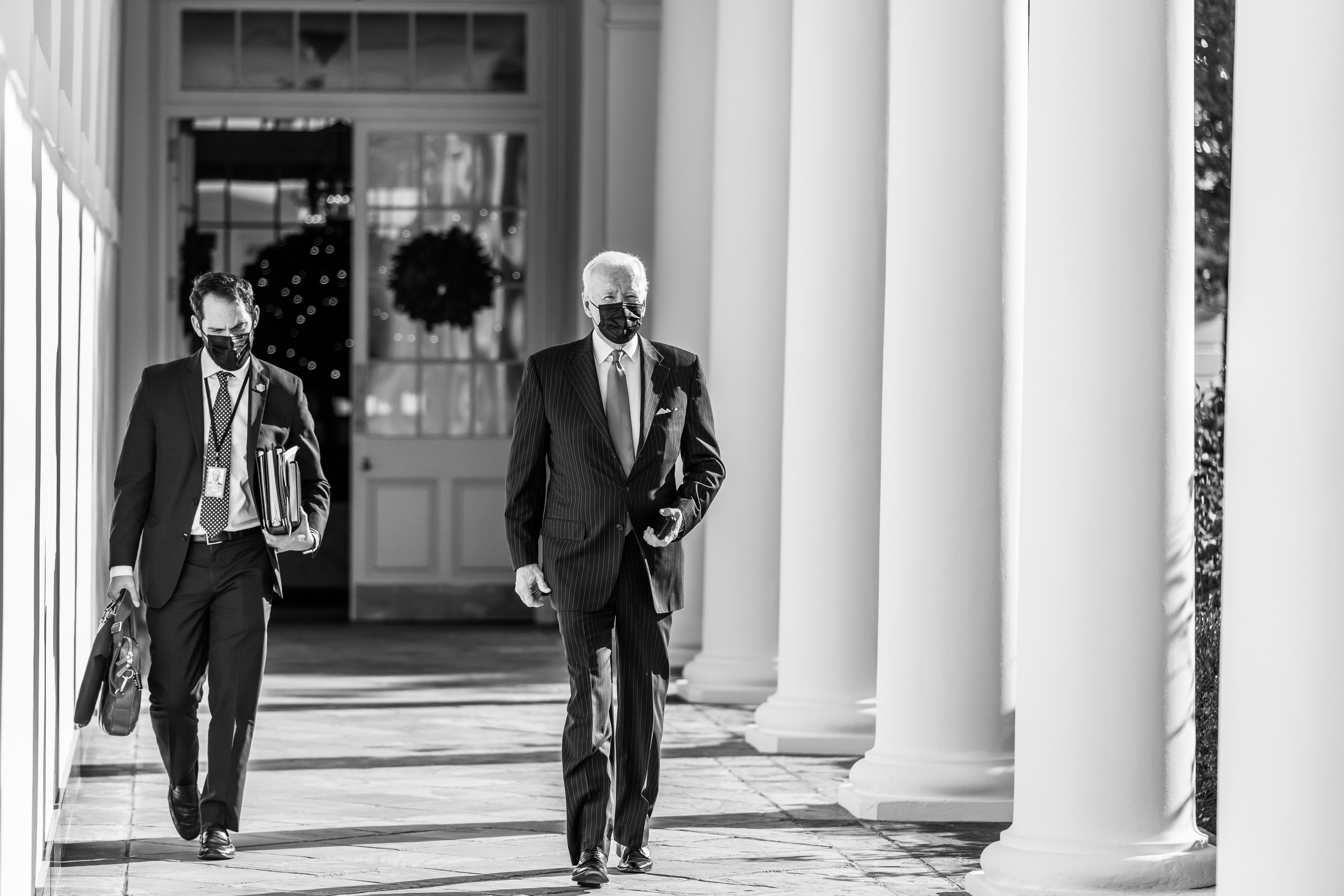 A new Yahoo News/YouGov poll finds 74% of Americans say the Russian invasion of Ukraine is not justified and 76% express an unfavorable opinion of Russian President Vladimir Putin.

A new AP-NORC poll finds just 24% of Americans say they are “extremely” or “very” worried about themselves or a family member contracting Covid-19, down from 36% in both December and January, when omicron caused a massive spike in infections and taxed public health systems. Another 34% say they are somewhat worried.

John Harris: “Here is one place Biden and his anxious party might start: By remembering that the modern presidency offers its occupants nearly inexhaustible capacity for political revival. While Biden faces a growing roster of doubts and doubters — including within his own party — his two immediate Democratic predecessors offer vivid examples showing that the tools for him to reverse perceptions and regain control of his presidency are within his grasp.”

New York Times: “All across the nation, political mapmakers have erected similarly impenetrable partisan fortresses through the once-in-a-decade redrawing of America’s congressional lines. Texas, which holds the nation’s first primaries on Tuesday, is an especially extreme example of how competition between the two parties has been systemically erased. Nearly 90 percent of the next House could be occupied by lawmakers who, like Mr. Crenshaw, face almost no threat of losing a general election, a precipitous drop that dramatically changes the political incentives and pressures they confront.”

“When primaries are the only campaigns that count, candidates are often punished for compromise. The already polarized parties are pulled even farther apart. Governance becomes harder.”

Washington Post: “As DeSantis continues to raise his profile, some of his former staffers and other GOP activists have raised concerns about whether he has the personal charisma and retail campaigning skills needed to succeed in the national political spotlight.”

“DeSantis struggles to make small talk with donors and others, sometimes not even making eye contact at house parties, according to people who have met with him. One person who has worked closely with him in Florida described the Harvard-educated attorney as ‘incredibly aloof’ while a donor who met him recently called him ‘painfully awkward,’ speaking on the condition of anonymity to describe a private interaction.”

MICHELLE 2024. Former Trump aide Monica Crowley told CPAC that Michelle Obama would put Republicans “in a very difficult position” if she ran for president in 2024, because the former first lady is both popular and “immune to criticism,” The Guardian reports.

ALABAMA U.S. SENATOR. CNN reports that, while Donald Trump is still supporting Rep. Mo Brooks in the May Republican primary, he’s warmed up to former Business Council of Alabama head Katie Boyd Britt and even told her that “he would speak positively of her in private and public appearances.” This amicable meeting, says the story, came about after Trump and New England Patriots coach Bill Belichick talked about the race at Trump’s Super Bowl party. Belichick once coached Britt’s husband, former offensive lineman Wesley Britt, and a source says he “said positive things about the couple when they got to talking about the race.”

All of this is a particularly unwelcome development for Brooks, who has spent the last several months dealing with stories relaying that Trump thinks he’s running a poor campaign. One unnamed source now says the GOP leader “has zero interest in lifting a finger for Mo,” though this person added that Trump’s people are still talking to the congressman about at least letting him hold fundraisers at Mar-a-Lago. One candidate whom Trump doesn’t sound at all likely to ever speak well of, though, is Army veteran Mike Durant: CNN says Trump derided him as “a McCain guy” because he functioned as a surrogate for John McCain’s 2008 campaign, when he was the GOP’s nominee for president.

OKLAHOMA U.S. SENATOR-B. Republican Sen. Jim Inhofe confirmed Thursday’s reports that he’s resigning and endorsing his chief of staff, Luke Holland, in the special election to succeed him in dark-red Oklahoma. Inhofe says he will remain in office for the rest of this Congress, which will prevent Gov. Kevin Stitt from being able to appoint a replacement.

Soon after Inhofe’s remarks, Holland held a press conference announcing that he would compete in the June primary, though he said that Inhofe couldn’t attend in person as planned because he was dealing with COVID symptoms. Holland rose from a mailroom job in the senator’s office in 2009 to become his chief of staff eight years later, though he does not appear to have ever run for office himself until now.

There are numerous other Republicans who could enter the race ahead of the April 15 filing deadline, and Politico reports that one unexpected Sooner State resident is considering: former Ambassador to Kenya Kyle McCarter, who previously served as a state senator in Illinois. It was in the Land of Lincoln that McCarter, with the endorsement of the Club for Growth, waged a 2016 primary challenge against GOP Rep. John Shimkus in the old 15th District, but he lost 60-40. News 9 also mentions state House Speaker Charles McCall’s name as a possibility, though it notes he’s a “likely 2026 candidate for governor.” Stitt, however, quickly took his own name out of contention and said he’d continue to seek re-election.

FLORIDA 22ND CD. Rep. Ted Deutch (D-FL) announced that he will not seek re-election this November.

Punchbowl News: “Deutch is the 31st Democrat to retire this cycle, a stunning exodus from the House Democratic Caucus in an already politically challenging year.”

NORTH CAROLINA 14TH CD. State Sen. Jeff Jackson announced Friday that he would seek the Democratic nomination for the new 14th District, a Charlotte-area seat that Biden would have won 57-41. The legislator, an Army veteran who has been talked about as a rising star for years, spent most of 2021 running for the U.S. Senate before dropping out in December, and he said Thursday he still has almost all of the $830,000 war chest he ended that campaign with. Jackson is the first notable Democrat to get in ahead of the March 4 filing deadline, though Charlotte Mayor Pro Tem Julie Eiselt has confirmed she’s considering.

NORTH CAROLINA 13TH CD. Former state Sen. Sam Searcy said on Friday that he’s considering a bid for North Carolina’s open 13th Congressional District, a newly redrawn seat in the Raleigh suburbs that would have backed Joe Biden by a narrow 50-48 margin, adding that he’d be “taking the weekend to weigh all options carefully.” Searcy unseated a Republican incumbent in 2018, but shortly after winning re-election two years later, he resigned to pursue an “unexpected opportunity” he did not identify at the time.

NEBRASKA 1ST CD. Republican Rep. Jeff Fortenberry, who is under federal indictment for allegedly lying to federal investigators regarding a campaign finance probe, has released an internal poll from Moore Information showing him with a 36-25 lead on state Sen. Mike Flood in the May GOP primary. The memo also includes trendlines indicating that Fortenberry has gained on Flood in a one-on-one matchup, going from a 35-33 edge for the incumbent in January to a 40-30 advantage now, and argues that the congressman’s negative ads on immigration have hurt Flood’s standing with voters.

However, 36% is a very dangerous place for any sitting officeholder to find themselves in, especially since an equal number of voters say they’re undecided. What’s more, this is the first and so far only poll of the race we’ve seen, and there’s still more than two months until the primary.

NEW YORK 4TH CD. Former Hempstead Supervisor Laura Gillen has entered the race for New York’s 4th Congressional District, which is open because Democratic Rep. Kathleen Rice is retiring. In 2017, Gillen shocked Long Island’s GOP establishment when she narrowly unseated a Republican incumbent by just a single point to become Hempstead’s first Democratic supervisor in more than a century. Two years later, however, she lost a similarly tight race for re-election by 1 point.

While Hempstead is officially designated a “town,” its population of 793,000 makes it by far the second-largest municipality in the state, behind only New York City and well ahead of Buffalo, which is home to just 278,000 people. Nationally, Hempstead would sit between San Francisco (pop. 874,000) and Seattle (737,000), big enough for 18th place. About 80% of the town is in the 4th District, and likewise roughly 80% of the district is comprised of Hempstead.

OREGON 6TH CD. Protect Our Future, a super PAC backed by cryptocurrency billionaire Sam Bankman-Fried, just reported spending $1.4 million on ads backing economic development adviser Carrick Flynn, who is seeking the Democratic nomination for Oregon’s brand-new 6th Congressional District. In response to criticisms from other candidates about the PAC’s involvement, Flynn said he has “never met or talked to” Bankman-Fried.

TEXAS 8TH CD. House Minority Leader Kevin McCarthy has endorsed Navy SEAL Morgan Luttrell, who has benefited from close to $700,000 in outside spending from his allies at the Congressional Leadership Fund ahead of Tuesday’s Republican primary.

PENNSYLVANIA 6TH CD. Just a day after dropping his bid for governor on Thursday, Republican Guy Ciarrocchi kicked off a new campaign against Democratic Rep. Chrissy Houlahan in Pennsylvania’s 6th Congressional District. The recently redrawn district, which is located in the Philadelphia suburbs, would have voted for Joe Biden by a 57-42 margin.

TENNESSEE 5TH CD. Retired Brig. Gen. Kurt Winstead, the former head of the Tennessee National Guard, entered the GOP primary on Thursday for the open 5th Congressional District, which Republicans recently transformed from blue to red by cracking apart the city of Nashville. He joins several other candidates seeking the Republican nomination, including former state House Speaker Beth Harwell, who kicked off her campaign earlier the same day.

Paxton’s anti-Guzman spot accuses her of having “spent our tax dollars on a woke critical race theory summit that claimed our justice system is racially biased and called for mandatory CRT training for every police officer in the state.” The narrator continues by saying Guzman “wants to give Texas children an app that tells them about their racial bias.”