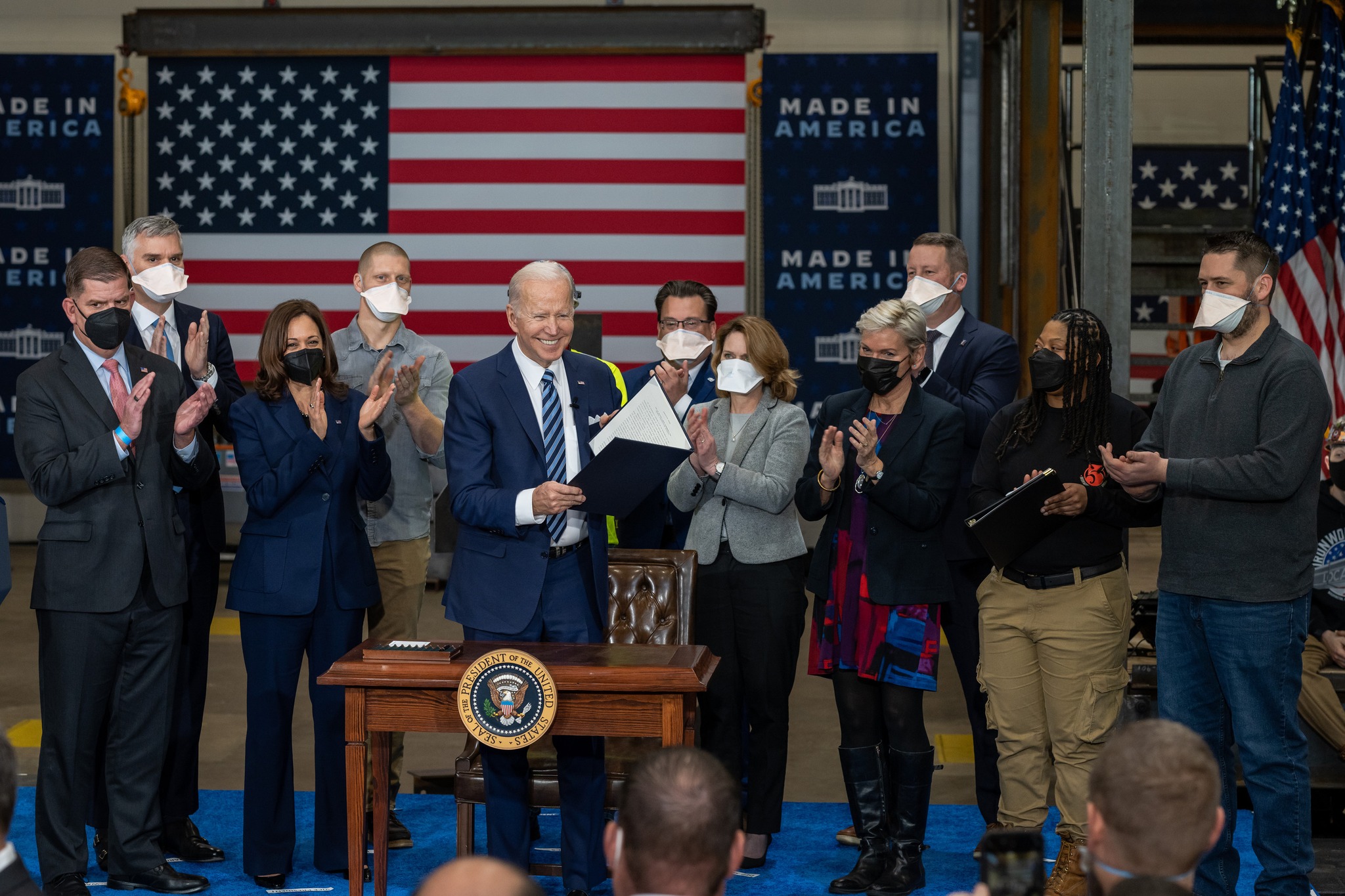 President Joe Biden’s approval rating fell to a record low in a new Washington Post-ABC News poll, with 37% saying they approve of the job he is doing and 55% saying they disapprove ahead of his first State of the Union address on Tuesday.

A new memo from Impact Research — which did polling for Joe Biden in 2020 — urges Democrats to declare a victory on Covid-19.

Key takeaway: “Recognize that people are ‘worn out’ and feeling real harm from the years-long restrictions and take their side. Most Americans have personally moved out of crisis mode.”

Also: “Stop talking about restrictions and the unknown future ahead. If we focus on how bad things still are and how much worse they could get, we set Democrats up as failures unable to navigate us through this.”

“Ohio Supreme Court Justice Pat DeWine said Thursday he would recuse himself from an upcoming hearing before the court in which his father, Gov. Mike DeWine, and other members of the Ohio Redistricting Commission have been ordered to explain why they violated a court order to approve new state legislative maps by late last week,” the Cleveland Plain Dealer reports.

“Repeatedly stymied by local courts in their efforts to draw maps that make it easier for their party to win elections, Republicans are trying to neutralize the ability of state supreme courts to interfere in the politically-charged redistricting process,” the AP reports.

“After setbacks in North Carolina and Pennsylvania’s supreme courts this week, GOP officials said the party needs to invest more in winning races for seats on those bodies.”

Politico: “Back in Washington, the GOP might be at odds about whether or not the party’s future should prominently feature the ex-president. And within Trump world, there’s been some angst about his current standing. There were fears he might not play as well with the CPAC crowd after being out of office, especially at a conference held in the backyard of another 2024 frontrunner: Florida Gov. Ron DeSantis.”

“But among the activists at CPAC, it turns out, diehard conservatives remain more excited about the prospect of a Trump reelection than anything else.”

Three minutes after rioters pushed past police lines of the U.S. Capitol, Herbster received a text from a campaign staffer telling him the Capitol was locked down.

Herbster responded: “Thank you. I was expecting as much.”

MICHIGAN 10TH CD. Macomb County Judge Carl Marlinga, a Democrat whose resignation takes effect Friday, asked Attorney General Dana Nessel earlier this week for a legal option about whether state law prohibits him from seeking federal office, but her office declined to do so. Marlinga, who is considering running for this competitive open seat in the Detroit suburbs, subsequently claimed that the attorney general’s response “clears the path” for him to campaign for the new 10th District.

At issue is a provision in the state constitution that bars sitting and former judges from running for a non-judicial office unless they’ve been off the bench for at least a year. Marlinga, though, has argued that he’s allowed to run for the House because of a 1995 Supreme Court decision that ruled that states cannot add further qualifications to candidates for Congress that aren’t in the U.S. Constitution.

Meanwhile, Sterling Heights City Council member Henry Yanez tells the Detroit News that he’s considering entering the August Democratic primary as well and hopes to decide in the next few weeks. Yanez previously ran for Congress in 2010 against then-Rep. Candice Miller in a safely red seat (which was also numbered the 10th District) and lost the general election 72-26, but he bounced back two years later by winning a competitive state House district.

Yanez convincingly held on during the 2014 GOP wave and won his final term 54-46 even as Donald Trump was carrying his constituency 52-43, but he went on to lose a contested race in 2018 for a GOP-leaning state Senate district. His time out of office was short, though, as he was appointed to a vacant seat on the Sterling Heights City Council months later and subsequently held it at the ballot box.

MINNESOTA 1ST CD. Richard Painter, a former ethics lawyer for the George W. Bush White House, on Wednesday announced that he would seek the Democratic nomination in both the special election and for the regular two-year term in Minnesota’s vacant 1st District, but he’s unlikely to deter anyone else from running. Painter, who joined the Democratic Party in 2018, challenged appointed Sen. Tina Smith in that year’s primary and got utterly destroyed, losing by a 76-14 margin. That seemed like it would be his last campaign as a Democrat, too, as Painter said just last week that he was open to running as an independent this year against Democratic Attorney General Keith Ellison.

On the Republican side, state Sen. Julie Rosen said she wouldn’t make the race but would instead support former state Rep. Brad Finstad. Finstad, who works for the U.S. Department of Agriculture, has not yet said anything publicly.

MISSOURI 4TH CD. Former NHL right wing Jim Campbell, who played for the St. Louis Blues from 1996 to 1999, has filed paperwork with the state to seek the Republican nod for what will almost certainly remain a safely red constituency in the western part of the state. Citing the death of a family member, however, he has not yet made a public announcement.

Campbell was able to submit paperwork to run for the 4th District even though Missouri still doesn’t have final congressional or state Senate maps because Secretary of State Jay Ashcroft determined that candidates for those offices should, for now, file to run for the existing districts; the filing deadline is currently set for March 29.

NORTH CAROLINA 8TH CD. Republican Rep. Dan Bishop, who represents the old 9th District, announced Thursday evening that he’d be seeking the new 9th, which would have gone for Trump 66-32. Bishop’s declaration came a day after he said he was “weighing whether to run in the court-imposed 8th or 9th district” or for an unnamed “state-wide judicial office.”

NORTH CAROLINA 9TH CD. Republican Rep. Richard Hudson, who holds the old 8th District, said Thursday morning he’d be running for the new 9th, a seat in the south-central part that would have supported Trump 53-45. The incumbent, though, already faces intra-party opposition from state Rep. John Szoka, who said the previous day that he’d campaign here.

Szoka ended last year with $140,000 on hand for a campaign for the 4th District that the GOP created in its first congressional gerrymander, but it appeared he would be out of luck after that map was struck down. Last week, Szoka was one of just two Republican representatives to vote against the second map the legislature passed, which would have very much disadvantaged him. He was therefore likely one of the very few Republicans who was relieved that those boundaries survived less than a week and were replaced by a court-drawn map that is otherwise much more favorable to Democrats.

Speaking of Democrats, state Sen. Ben Clark has also declared that he’s running for the 9th. Clark, too, had been running for the now-defunct 4th District, but he had just $23,000 on hand at the conclusion of December.

NORTH CAROLINA 13TH CD. Democratic state Sen. Wiley Nickel has announced that he’s in for the new 13th District, a suburban Raleigh constituency that would have favored Biden by a narrow 50-48 margin. The Republican field so far includes activist DeVan Barbour and two others we hadn’t previously mentioned: attorney Kelly Daughtry and pastor Chad Slotta.

Daughtry, who is the daughter of former state Rep. Leo Daughtry, had $151,000 on hand, almost all of it self-funded, at the end of 2021 for the now-defunct 4th District. There seems to be far more where that came from too, as NC Insider’s Brian Murphy reports she threw in an additional $2 million Thursday morning. Slotta, who had been running for the 7th District last year under the first GOP map, had $232,000 on hand in December that also almost entirely came from his own bank account.

NORTH CAROLINA 14TH CD. Democratic state Sen. Jeff Jackson said Thursday that he was considering running for the new 14th District, a Charlotte-area seat that Biden would have won 57-41. Jackson spent most of 2021 running for the U.S. Senate before dropping out in December, and he says he still has almost all of the $830,000 war chest he ended that campaign with. WFAE also reports that Charlotte Mayor Pro Tem Julie Eiselt is also thinking about entering the Democratic primary, while the city’s mayor, Vi Lyles, did not answer when asked. State Sen. Malcolm Graham, though, was an emphatic no, saying, “Juice is not worth the squeeze.”