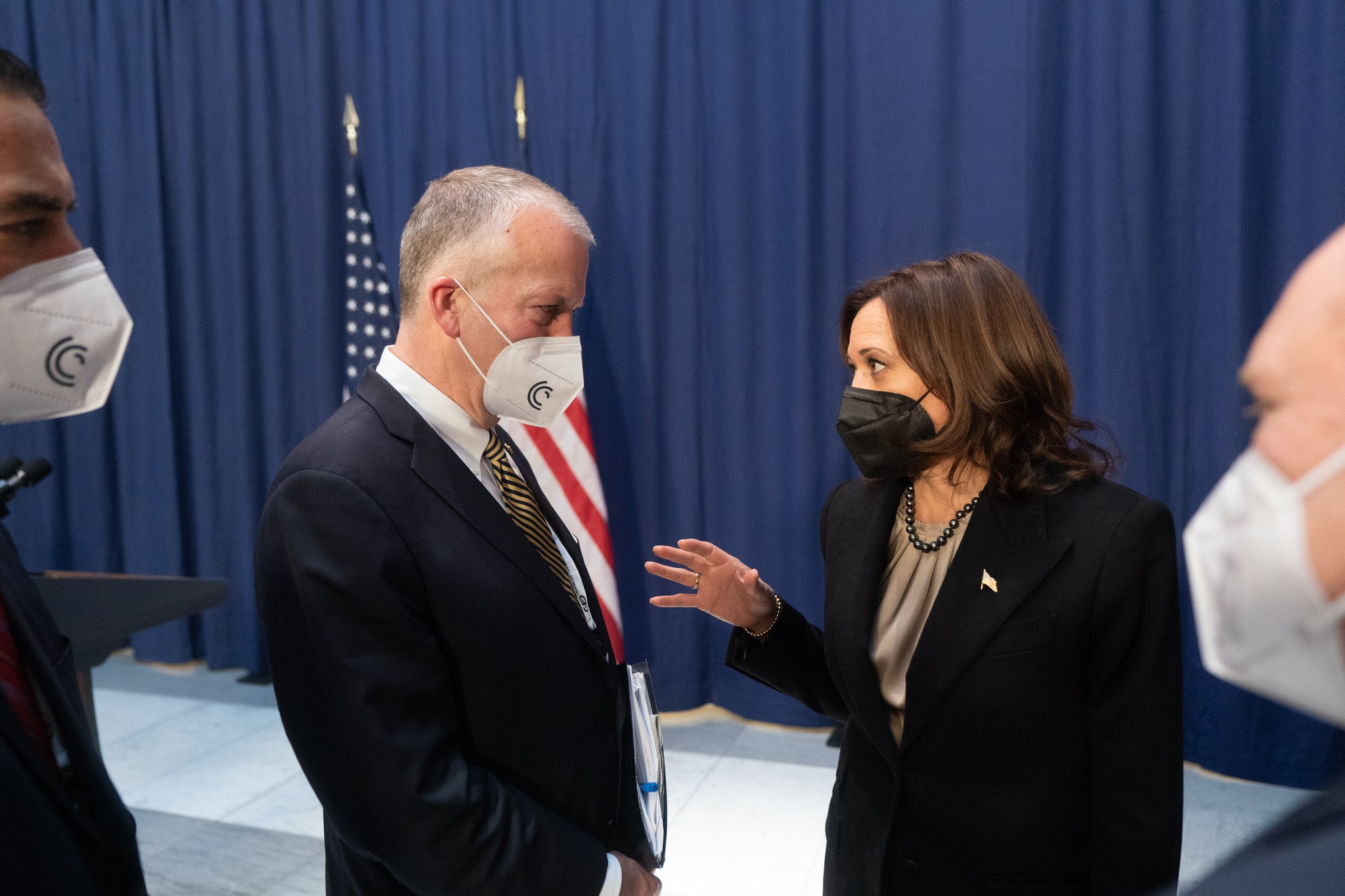 A new University of North Florida poll of registered Florida Republicans finds Gov. Ron DeSantis edging Donald Trump as the preferred Republican nominee for president in 2024 by 44% to 41%.

Larry Sabato’s Crystal Ball: “Despite the growing proportion of districts that strongly favor one party based on presidential voting, the actual margins of House elections have changed very little over the past 50 years, and partisan turnover has fallen only slightly, if at all.”

“The explanation for these contradictory trends is that the personal advantage of incumbency has declined dramatically since the 1980s: The ability of House incumbents to attract votes across party lines and thereby insulate themselves from competition is now much more limited than it was in the 1970s and 1980s.”

FiveThirtyEight: “Some Democrats have even gone as far as to venture that a rough midterm election for their party — which seems quite possible — might discourage Biden from running again, opening the door for Vice President Kamala Harris or another Democrat to win the party’s nomination.”

“But while a strong Republican performance in 2022 might influence Biden’s thinking on 2024, it’s a mistake to expect the midterm result to predict how the country will vote in the ensuing presidential election. There’s little relationship between the margin in the national popular vote for the U.S. House in a midterm election and the national popular vote margin in the next presidential contest.1 So whatever happens in the House this November, don’t expect it to forecast the results of the next presidential race.”

OK-Sen-B: The New York Times’ Jonathan Martin tweeted Thursday that he’s been “hearing” that Republican Sen. Jim Inhofe, who is 87, “may resign in the next few days,” and several outlets quickly confirmed that the senator plans to leave office when the current Congress ends and a successor can be elected. KOCO’s Dillon Richards says that Inhofe will hold a press conference Friday afternoon, while both Politico and Martin put Monday as the date of his departure announcement. As long as Inhofe submits his resignation on or before March 1, he will be allowed to serve for the rest of the year and Gov. Kevin Stitt would not be able to appoint a replacement.

The timing would also allow a special election to take place this year, with the primary and general election coinciding with the regularly scheduled race for Oklahoma’s other Senate seat. We’ll be referring to this special election for the final four years of Inhofe’s term as OK-Sen-B, while the regular contest, which features Republican Sen. James Lankford’s bid for another six-year term, will be OK-Sen-A. The statewide filing deadline is April 15, while the primary is June 28. If no one earns a majority of the vote, a runoff would take place Aug. 23.

The Sooner State is one of the reddest states in the nation, so there’s no question that the eventual Republican nominee will succeed Inhofe. Team Red has a massive bench of elected officials here, but according to the Associated Press, the person Inhofe is “expected to support” is his chief of staff, Luke Holland. The Oklahoman adds that, because there have been rumors for weeks about the senator’s resignation, Reps. Kevin Hern and Markwayne Mullin have been “positioning themselves” to run, while former state House Speaker T.W. Shannon is also reportedly thinking about it. Shannon ran in the 2014 special when Sen. Tom Coburn resigned, but Lankford beat him 57-34.

The AP and Politico also name several other Republicans who could run, including attorney Gentner Drummond, Lt. Gov. Matt Pinnell, former U.S. Attorney Trent Shore, and Stitt himself. Stitt is currently running for re-election, while Drummond is campaigning for attorney general.

GA SEN Georgia U.S. Senate candidate Herschel Walker (R) said that he did not support “either” Georgia Gov. Brian Kemp (R) or former Sen. David Perdue (R) in the state’s gubernatorial race, the Atlanta Journal Constitution reports.  Said Walker: “I don’t support either one of them. I’m mad at both of them.”

GA-SEN  Former Georgia senator-turned-gubernatorial-candidate David Perdue put out a “tough on crime” campaign ad on Wednesday in which the ex-Republican senator shakes hands with a county sheriff deputy who was later arrested on child pornography charges (his case is still pending).    “CRACK DOWN ON CRIME” is splashed over the footage.

The Perdue campaign took down the footage later on Wednesday and told FOX 5 it was a mistake.  Georgia Gov. Brian Kemp’s (R) reelection campaign was the one that flagged the unfortunate moment.

GA-Gov: Former Sen. David Perdue is spending at least $600,000 on his new ad campaign for the May Republican primary, but he had to quickly edit his spot after Gov. Brian Kemp’s team pointed out that it featured a photo of the challenger shaking hands with Grady Sanford, a former Forsyth County chief deputy who was charged with child pornography. Perdue’s consultant said that the image came from an event that took place well over a year before Sanford was arrested and called what happened a “b-roll mistake.”

WI-Sen: Republican incumbent Ron Johnson continues to pander to the state’s conservative base in a new ad where he proclaims, “Instead of being impartial, media outlets have become advocates for the Democrat [sic] Party.”

MO-SEN Former Missouri Gov. Eric Greitens (R), who is running for U.S. Senate, met with Donald Trump for 30 minutes at Mar-a-Lago, the New York Times reports.  Trump has made critical comments about Greitens to aides but more recently has been more positive about him.

MI-Gov: While former Republican Rep. Pete Hoekstra didn’t rule out running for governor in May, he appeared via pre-recorded video at an event for businessman Perry Johnson on Wednesday.

PA-Sen: Politico reports that businessman Jeff Bartos’ allies at Jobs for Our Future are spending $2 million on a 10-week ad campaign promoting him and going after two of his opponents in the May Republican primary, former hedge fund manager David McCormick and TV personality Mehmet Oz. The ad shows animations of the pair “parachuting into Pennsylvania” before arguing that Bartos, who was the 2018 nominee for lieutenant governor, is the “one real conservative in this race who actually lives here.”

PA-Gov: Guy Ciarrocchi, who is the former president of the Chester County Chamber of Business and Industry, announced Thursday that he was dropping out of the May Republican primary. Ciarrocchi had by far the longest title of all the GOP candidates, but he struggled to raise a serious amount of money.

AZ-Sen: In his first TV ad of the cycle, Democratic incumbent Mark Kelly tells the audience about his family’s financial struggles when he was growing up and declares, “I know that Arizona families are working hard to get by right now, and that’s why I won’t give up on getting our economy back on track and lowering every day costs.”

RI-Gov: Former Rhode Island Turnpike and Bridge Authority chair David Darlington said this week that he was ending his bid for the Republican nomination for governor, though he never actually submitted any paperwork in the nearly five months between when he declared his candidacy and now. No other notable Republicans have announced a campaign, though businesswoman Ashley Kalus did file paperwork of her own earlier this month.

HI-Gov: Honolulu City Councilwoman Heidi Tsuneyoshi this week became the first notable Republican to enter the race to lead this very blue state. Tsuneyoshi was elected to the nine-member body in 2018, and she’s made a name for herself as a critic of the long-controversial multi-billion dollar Honolulu Rail Transit Project.

NM-Gov: 2020 Senate nominee Mark Ronchetti launched his first TV ad this week, just days ahead of the Saturday Republican primary convention; the GOP firm Medium Buying says it’s running on Fox, though there’s no word on the size of the buy. Ronchetti spends the spot pledging to create “a border strike force to go after the cartels.”

Ronchetti is one of five Republicans competing in the June primary for the right to take on Democratic Gov. Michelle Lujan Grisham, and Saturday’s event will be an early test for the contenders. As we’ve written before, any candidate who wins the support of at least 20% of the convention delegates will advance to the primary, and the person who takes first earns the top spot on the June ballot. Contenders who fail to hit the 20% threshold can still make it to the primary, though, if they turn in the requisite number of signatures by March 8.

AL-Gov: Gov. Kay Ivey’s latest commercial takes up the transphobic themes that businessman Tim James, who is one of her opponents in the May Republican primary, has been emphasizing. “Biden’s Critical Race Theory is racist, wrong and dead as a doornail,” says the incumbent before continuing, “Transgender sports—toast. They can try that in California.”

Ducey made it clear he still stands by the cash boost, telling reporters that he’s “proud of what we’ve been able to accomplish.”

“Challenges seeking to bar Rep. Madison Cawthorn (R-NC) from running for reelection cannot move forward as long as Cawthorn remains a candidate in the district he filed in, which has now been moved halfway across the state,” the Raleigh News and Observer reports.  “The challenges argue that Cawthorn should be disqualified from running for office because of what they allege is his involvement in the Jan. 6, 2021, attack on the U.S. Capitol.”

“Don’t look for consistency in Republican policy. The Republican Party right now is a little schizophrenic. Anti-communism and love of freedom used to be the glue that held the party together, but now the attitudes toward Russia have gotten all mixed up with domestic politics.”  GOP consultant Craig Shirley, quoted by the Washington Post.

Former Gov. Andrew Cuomo (D) will begin an attempt at a political comeback with an ad claiming he’s been exonerated from charges he sexually harassed multiple women, the New York Post reports.

A new study finds the QAnon conspiracy movement continues to thrive and has even strengthened more than a year after Donald Trump left the White House, The Guardian reports.  “Some 22% of Americans believe that a ‘storm’ is coming, 18% think violence might be necessary to save the country and 16% hold that the government, media and financial worlds are controlled by Satan-worshipping pedophiles.”

Donald Trump’s social media app, Truth Social, banned a user who tried to create an account called “@DevinNunesCow”, a nod to the Twitter parody account which purports to be run by a cow owned by former Rep. Devin Nunes (R-CA), who is now the CEO of the new “free speech” social media platform, Insider reports.