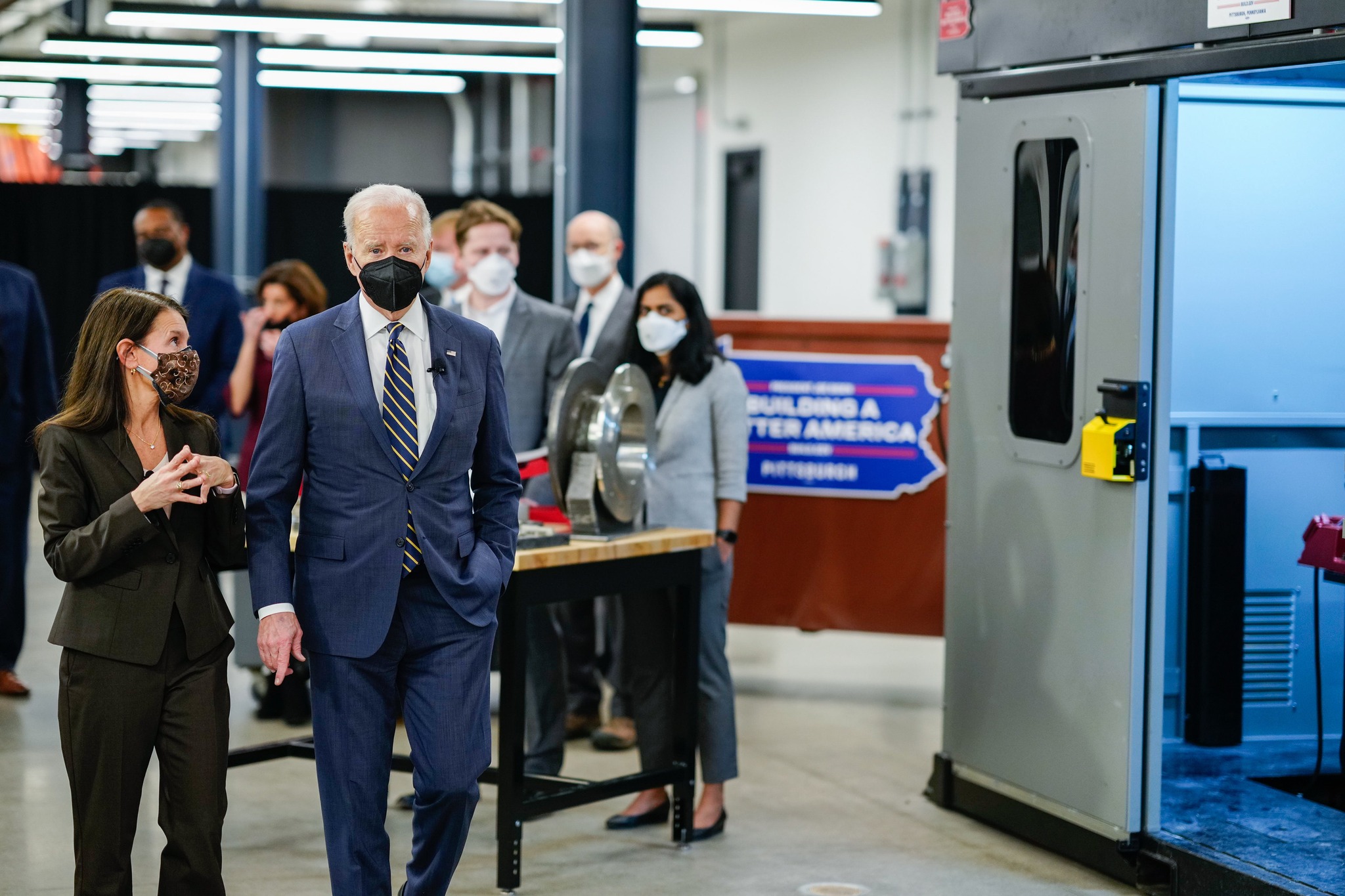 A new AP-NORC poll finds just 26% of Americans want the U.S. to take a major role in the Russia-Ukraine conflict.  Fifty-two percent want the U.S. to play a minor role while 20% say none at all.

“A North Carolina court rejected a Republican-drawn map of the state’s 14 congressional districts on Wednesday and substituted its own version, the second time in less than two weeks that a court in the state has invalidated a Republican House map as unconstitutionally partisan,” the New York Times reports.

“The new map, drawn by a nonpartisan panel of four redistricting experts, appeared to split North Carolina’s congressional districts roughly equally between Republicans and Democrats, in a state where voters are divided evenly along partisan lines. It gives each party six relatively safe House seats and makes the remaining two winnable by either side.”

COLORADO 3RD CD. Alex Walker (D), who is running in the Democratic primary to challenge Rep. Lauren Boebert (R-CO), announced his campaign in a campaign video featuring a literal shit storm.  Said Walker: “Colorado needs a bull, not a bullshitter. I’m Alex Walker and I approve the shit out of this message!”

FLORIDA 16TH CD.  Republican congressional candidate Martin Hyde (R) was caught on police body camera threatening to end an officer’s career because she pulled him over for a traffic stop.  Said Hyde: “Is it your Russian immigrant status that makes you treat people like this?”

NEW JERSEY 2ND CD. 2020 Democratic nominee Amy Kennedy has endorsed civil rights lawyer Tim Alexander, a move that takes her out of contention for a rematch against Republican incumbent Jeff Van Drew. The congressman ended December with a massive $966,000 to $17,000 cash-on-hand lead in a coastal South Jersey seat where redistricting increased Donald Trump’s margin from 51-48 to 52-47.

CALIFORNIA 13TH CD. Phil Arballo, who was the 2020 Democratic nominee in the old 22nd District, has earned the endorsement of SEIU California in the June top-two primary.

MICHIGAN 13TH CD. Michigan Civil Rights Commissioner Portia Roberson, who leads a nonprofit, announced this week that she was joining the Democratic primary for this safely blue Detroit-based seat. Roberson previously served in the Detroit city government and in the Obama-era Department of Justice, and this appears to be her first run for office.

CALIFORNIA 12TH CD. “Reed Jobs, the well-liked millennial son of Laurene Powell Jobs and the late Steve Jobs, has privately talked about a political run, including for Nancy Pelosi’s seat if it opens,” Puck reports.

CALIFORNIA 22ND CD. Delano Mayor Bryan Osorio, a Democrat who had been running for California’s 22nd Congressional District, recently altered his website to identify him as a candidate for the state Senate instead.

GEORGIA 10TH CD. Businessman Marc McMain, a Republican we hadn’t previously mentioned, is airing a new ad where he promises to put Anthony Fauci “in jail.” There is no word on the size of the buy though McMain, who has been self-funding a portion of his campaign, ended December with $272,000 on hand in the crowded primary for this safely red seat.

ILLINOIS 7TH CD. Chicago Mayor Lori Lightfoot has endorsed longtime Rep. Danny Davis in the June Democratic primary for this safely blue constituency. Davis faces a rematch against anti-gun-violence activist Kina Collins, whom he beat 60-14 in a four-way race last cycle. He ended 2021 with a $532,000 to $131,000 cash-on-hand lead.

TEXAS 3RD CD. Rep. Van Taylor is airing an ad ahead of next week’s Republican primary that praises him for having “proudly stood with President Trump on securing the border and fighting the liberal mob” and touts his backing from Sen. Ted Cruz and the NRA.

TEXAS 35TH CD. End Citizens United has endorsed Austin City Councilman Greg Casar ahead of next week’s four-way Democratic primary for this open seat, where he’s hoping to win the majority of the vote needed to avoid a May runoff. During the pre-primary period, which lasted from Jan. 1 to Feb. 9, Casar outspent another Austin-based politician, state Rep. Eddie Rodriguez, $463,000 to $354,000, and the councilman went into the final weeks with a $168,000 to $36,000 cash-on-hand lead; Casar also has benefited so far from $176,000 in outside spending, with the vast majority coming from the Working Families Party.

Former San Antonio City Councilwoman Rebecca Viagran spent a mere $14,000 during the first weeks of the year and had $65,000 left, though she could benefit from being the only candidate from the San Antonio corner of the district. A fourth candidate, consultant Carla Joy Sisco, has generated very little attention.

OHIO 1ST CD. While Hamilton County Commissioner Alicia Reece reportedly had been considering seeking the Democratic nomination to take on Republican Rep. Steve Chabot, she instead announced over the weekend that she was backing Cincinnati City Councilman Greg Landsman. Landsman already had the support of newly elected Cincinnati Mayor Aftab Pureval, who lost to Chabot in 2018.

NFEW YORK 4TH CD. Nassau County Legislator Siela Bynoe on Tuesday became the first notable candidate to enter the race since Rep. Kathleen Rice, a fellow Democrat, announced her retirement last week. Bynoe didn’t rule out a primary challenge to Rice back in early 2019 after the incumbent took part in the disorganized attempt to prevent Nancy Pelosi from taking back the speaker’s gavel, but she didn’t end up going for it.

PENNSYLVANIA 7TH CD. Republican state Rep. Ryan Mackenzie declared Tuesday, one day before the new congressional map was released, that he’d decided to remain in the legislature. Mackenzie filed with the FEC back in November for a possible bid against Democratic Rep. Susan Wild, but as we like to remind readers, setting up a fundraising committee and actually announcing a campaign are not the same thing.

NEW YORK 1ST CD. Nick LaLota, who serves as the Suffolk County Legislature’s chief of staff, entered the Republican primary last week for this open seat and immediately earned the unanimous endorsement of the county GOP’s executive committee; the local Conservative Party also says it plans to back him. Democrats transformed this eastern Long Island district from a 51-47 Trump constituency to one that would have favored Biden 55-44.

LaLota served as the GOP’s county elections commissioner last cycle when he tried to challenge vulnerable Democratic state Sen. John Brooks, but things went horribly wrong for him and his party. A judge disqualified LaLota, who was the one Republican to file, by ruling that his position as an elections commissioner created a conflict of interest for the candidate, and Brooks won without opposition after the state’s highest court ruled that the GOP couldn’t nominate someone else. LaLota gave up his post on the elections board earlier this year to become chief of staff to the new head of the county legislature.

A new Ipsos survey across 28 countries finds that more than 80% agree that single-use plastics should be banned as soon as possible.

“Most politicians with national ambitions are playing coy about running for president in 2024. But behind the scenes, Republicans are on a quiet and unprecedented spending spree to build the foundations for potential national campaigns,” Politico reports.   “A half-dozen potential GOP candidates, most of whom won’t be on the ballot in 2022, still spent more than $1.4 million each on email list rentals, digital consulting and online fundraising in 2021.”

Casey Newton on why Trump’s social media alternative will fail: “There are very few liberals posting on them, reducing the amount of polarized conflict that provides so much entertainment on Twitter in particular. Their business models are fuzzy and largely theoretical. They have so far failed to hire the kind of name-brand talent that helps social apps grow and make money.”

“With the arrival of Truth Social, though, believers in a conservative-led alternative to mainstream social networks can finally play a literal Trump card. Posts from the president will undoubtedly drive at least some level of media coverage, particularly as they are cross-posted onto Twitter by his supporters and detractors. That does make it feel different, and potentially more consequential, than its predecessors.”

“But aside from those posts, Truth Social doesn’t look much different from its predecessors at all. It still looks to be structured for mostly one-way communication, broadcast primarily to an audience of Trumpist dead-enders.”

“That may be the path to glory in today’s GOP, but in giving aid and comfort to Vladimir Putin as Russia invades Ukraine, he’s sold out democratic values yet again.”

“Signatures of some voters in apartment buildings and high-rise towers in South Florida whose registration was changed to Republican appeared noticeably different than on paperwork those same voters signed earlier,” WUSF reports.

Michael Bloomberg offered an apocalyptic warning for Democrats: “I am deeply concerned that, absent an immediate course correction, the party is headed for a wipeout in November, up and down the ballot.”

A new Gallup poll finds that “younger Democrats are driving a huge decline in national news consumption in the U.S.” “It marks the first time since the study began in early 2018 that Democrats report having less interest in national news than Republicans and independents.”