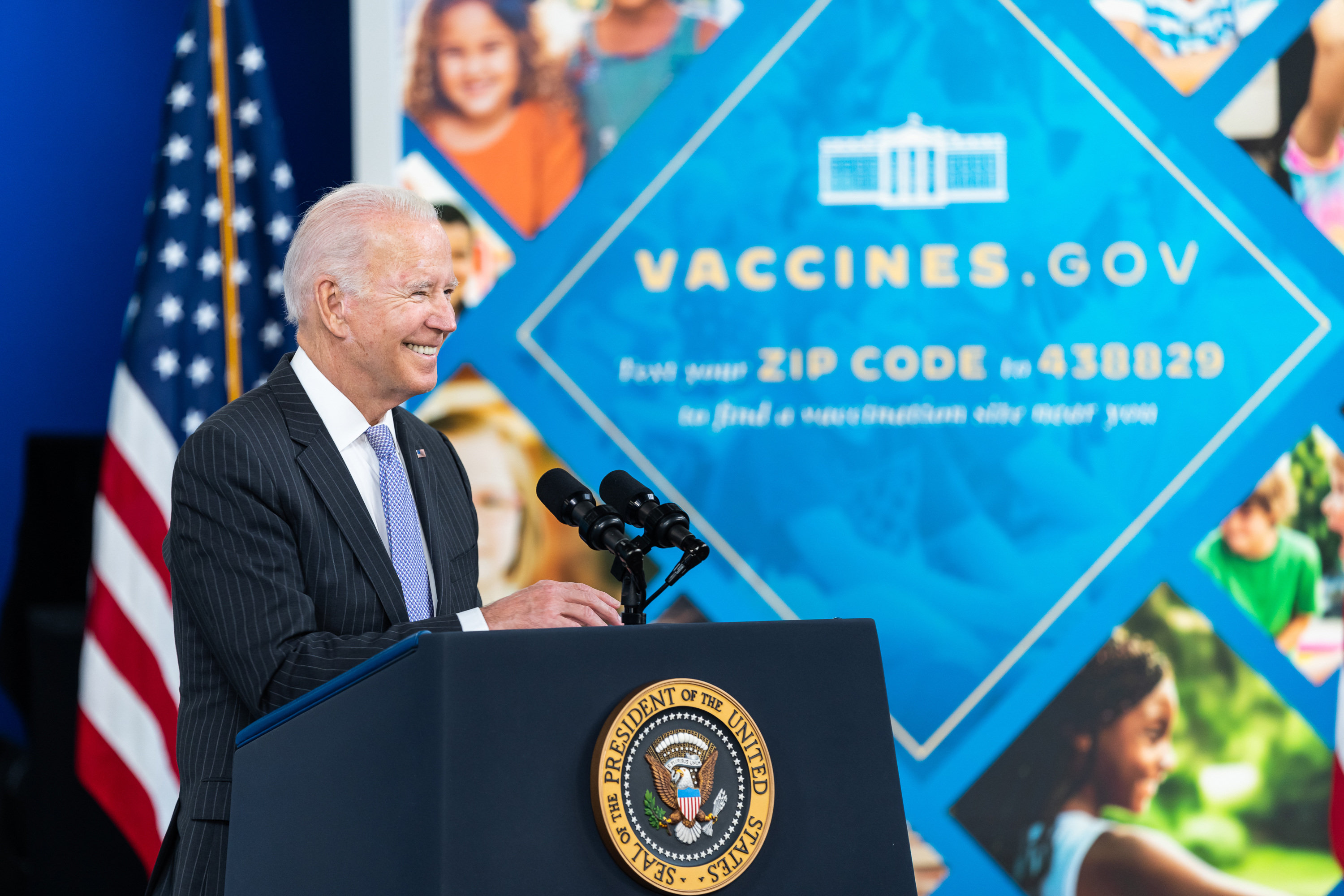 A new Gallup poll finds 41% of U.S. adults approve of the job Joe Biden is doing as president, similar to his 40% rating for handling foreign affairs, while approval of his handling the economy and the situation with Russia are slightly lower.

A new Morning Consult poll finds 65% of rural voters view the Democratic Party unfavorably — including 48% who do so strongly.

Among 21 issues tested, a rural voter’s desire for candidates to support securing the U.S.-Mexico border had the strongest correlation with negative views about the Democratic Party.

“Democratic secretaries of state say they’re at the vanguard of protecting democracy, pushing back against election disinformation and attempts to suppress the vote. But while the party’s base has largely rallied behind them, its biggest donors have not,” Politico reports.

“During the last six months of 2021, just one person, Democratic financier George Soros, gave more than $25,000 to the main association involved in electing the party’s candidates for secretaries of state… Four other individuals gave $25,000 precisely.”

Playbook: “It’s a familiar experience for the Democratic Party: A lack of investment in less flashy down-ticket races also helped doom them in state legislatures throughout the Obama and Trump years.”

CALIFORNIA 22ND SPECIAL ELECTION. The state has released a list of candidates for the April 5 all-party special election to succeed Devin Nunes, who resigned last month to lead Donald Trump’s new social media app (the rollout is not going well), and four Republicans and two Democrats are competing here. If no one earns a majority, the top two vote-getters, regardless of party, would compete in the June 7 general election that would take place the same day as the regular statewide primary. Trump carried this Central Valley seat 52-46, but Republicans have done better down the ballot.

The eventual winner probably won’t be in Congress long, however, because there really isn’t a plausible district where any of them could campaign for a full term. One Republican, businessman Michael Maher, has said he’ll run in the new 22nd District against Democratic Rep. Jim Costa, but he’d face a very difficult race in a seat that Joe Biden would have carried 59-39. By contrast, fellow Republican Connie Conway, a former state Assembly minority leader who appears to be the special frontrunner, has promised not to run anywhere this fall. The GOP side also includes Elizabeth Heng, who challenged Democratic Rep. Jim Costa in the 2018 race for the old 16th District and lost 58-42; and businessman Matt Stoll, who identifies as pro-choice.

The two Democrats are Marine veteran Eric Garcia, who took 3% in the 2020 top-two primary as an independent, and Lourin Hubbard, who is an official at the California Department of Water Resources. Both Garcia and Hubbard were running against Nunes before he bolted, but neither of them had more than $18,000 on hand at the end of last year.

ILLINOIS 1ST CD. Primary School flags that real estate executive Nykea Pippion McGriff has filed FEC paperwork to seek this safely blue seat, though she does not appear to have made an announcement yet.

GEORGIA 10TH CD. Businessman Matt Richards declared Monday that he was exiting the May Republican primary for this open seat and endorsing businessman Mike Collins.

MICHIGAN 3RD CD. The Democratic group EMILY’s List has released a mid-January survey from Impact Research arguing that Rep. Peter Meijer is in real danger of losing his August Republican primary to conservative commentator John Gibbs. Meijer starts with a 26-13 edge, but Gibbs pulls ahead after respondents are told that the congressman voted for impeachment and that Trump is endorsing the challenger. The poll was taken weeks before 2020 Democratic nominee Hillary Scholten, whom EMILY supported last time, launched her second campaign.

MICHIGAN 13TH CD. Detroit city official Adrian Tonon, who had been raising money for a bid against Republican Rep. Tim Walberg in the old 7th District, announced Friday he would campaign for the new and safely blue 13th instead. The Detroit Metro Times writes that Tonon, who ended 2021 with $162,000 on hand, was the “city’s first 24-hour economy ambassador to lead music, film, and nighttime initiatives,” a post nicknamed the “night mayor.”

“Republican candidates across the country are vying for former President Donald Trump’s endorsement to help shore up campaign funds and excite the GOP base,” CNN reports.  “But Trump’s support hasn’t been enough to clear all Republican fields — something that is on display in two primary races pitting incumbent GOP House members against each other.”

Sen. Tim Scott (R-SC) suggested to Fox News that he would like to be Donald Trump’s running mate should the former president run in 2024.  Said Scott: “Everybody wants to be on President Trump’s bandwagon, without any question.”

“Donald Trump’s Save America ended January with $108 million in the bank, yet the former president’s political action committee didn’t donate any of it last month to the dozens of candidates he’s backing,” Bloomberg reports.

MINNESOTA 1ST CD and GOVERNOR. State Rep. Jeremy Munson on Saturday did not rule out running in the May primary to succeed Rep. Jim Hagedorn, a fellow Republican who died the previous day. Munson told his local party convention that he wouldn’t seek re-election to the legislature and said that his “immediate focus will be on ensuring a conservative is elected to represent” the 1st Congressional District. Axios’ Torey Van Oot responded by tweeting that Munson is “seen as a likely candidate.” Minnesota Public Radio’s Brian Bakst also reports that Austin City Council member Jason Baskin is considering.

Carnahan is Hagedorn’s widow, while Miller lost the 2014 primary to the late congressman.

State Sen. Carla Nelson, whom Hagedorn defeated for the nomination in 2018, was also mentioned, but she quickly said no. There were reports last year that Nelson was thinking about running for governor, but her declaration Monday that she would seek re-election finally closes the door on that possibility. Olson also reports that state Senate Majority Leader Jeremy Miller has also declined a House bid.

On the Democratic side, state Sen. Nick Frentz didn’t quite reject the idea of running in the special, but he sounds very unlikely to go for it. “I don’t think it’s right for me,” he told Bakst, adding that he thought the party had “better options.”

MISSOURI 7TH CD. Pastor Alex Bryant announced last week that he was joining the crowded Republican primary for this safely red open seat, proclaiming, “I have come to realize that the radical secularists are not satisfied with merely promoting their ideas, rather they are using ridicule and intimidation to silence any voice opposed to their agenda.” Bryant would be the first African American Republican to represent Missouri in Congress.

Rep. Madison Cawthorn (R-NC), an eager foot soldier in Trump’s attempt to overturn the 2020 election, told Fox News host Tucker Carlson on Monday night that a group of North Carolina voters who are trying to get him disqualified from running for office are “actually very close” to succeeding.

Cawthorn’s lawyer is citing a congressional action that granted amnesty to Confederate soldiers to defend his client.

NEW YORK 22ND CD. Nonprofit executive Vanessa Fajans-Turner, who leads what WAER characterizes as “an initiative aimed at persuading major banks to phase out financing for fossil fuels and to adopt climate-friendly financing policies,” announced earlier this month she was joining the Democratic primary for the new 22nd District, an open seat that Joe Biden would have carried 58-40.

WASHINGTON DC MAYOR. Our first poll of the June Democratic primary comes from Abt Associates for the Washington Post, and it finds Mayor Muriel Bowser leading Councilmember Robert White 47-19, with 17% going to Councilmember Trayon White (the two challengers are not related). It only takes a plurality to win the Democratic nod, which is tantamount to election in the District of Columbia.

TEXAS 3RD CD. The Congressional Leadership Fund is spending $150,000 on advertising, mail, and get-out-the-vote efforts to boost Rep. Van Taylor ahead of next week’s Republican primary in a race that hasn’t attracted much outside attention.

Taylor’s most prominent intra-party foe is former Collin County Judge Keith Self, who has attacked the incumbent for voting to accept Joe Biden’s Electoral College victory in the hours after the attack on the Capitol and for supporting the creation of the Jan. 6 commission. Taylor, though, has enjoyed a massive financial advantage from Jan. 1 to Feb. 9, which is the time the FEC defines as the pre-primary period: The incumbent outspent Self $495,000 to $56,000, and he had a $827,000 to $92,000 cash-on-hand lead for the final weeks.

TEXAS 8TH CD. The Congressional Leadership Fund is spending what Fox says is $600,000 on its first-ever TV ad campaign in a Republican primary in support of Navy SEAL veteran Morgan Luttrell. The narrator says the candidate “[f]ought bravely in two [wars]; nine combat deployments. Make that 10 after we send Morgan Luttrell to Congress.” (Yes, the GOP leadership’s super PAC is really likening serving in Congress to serving in war.) The commercial, which goes on to praise Luttrell as a pro-Trump conservative who will “crush the woke mob,” does not mention political operative Christian Collins, his main intra-party rival in the March 1 contest.

TEXAS 34TH CD. Army veteran Ruben Ramirez has earned an endorsement from Rep. Vicente Gonzalez, who represents over two-thirds of this new constituency but is running in the neighboring 34th District, in the March 1 Democratic primary. Ramirez campaigned for the old 15th District when it was last open in 2016 but took only 6% of the vote in the primary that was ultimately won by Gonzalez.