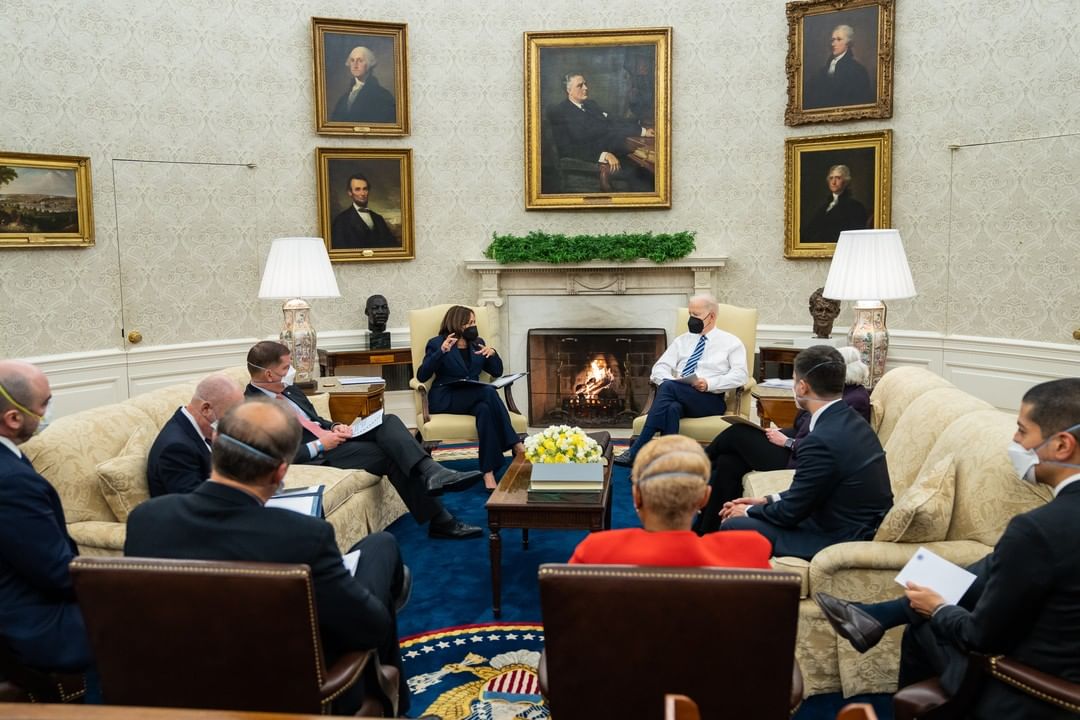 The Russian invasion of Ukraine has begun. The Kremlin published decrees ordering Russia’s defense ministry to deploy troops to carry out “peacekeeping functions” in two Russia-backed separatist territories that have loomed large in the conflict over Ukraine, the New York Times reports.

“The Kremlin said Monday that President Vladimir Putin would recognize the independence of two territories in Ukraine controlled by Moscow-backed separatists, further escalating tensions in what Western nations fear could lead to one of the biggest conflicts in Europe since World War II,” the New York Times reports.

“President Vladimir Putin delivered an emotional and aggrieved address laying claim to all of Ukraine as a country ‘created by Russia,’ recognizing the independence of two Russian-backed territories in eastern Ukraine and threatening the government of Ukraine that the bloodshed could continue,” the New York Times reports.

“Mr. Putin’s speech laid out such a broad case against Ukraine — describing its pro-Western government as a dire threat to Russia and to Russians — that he appeared to be laying the groundwork to take action beyond simply recognizing two small breakaway republics.”

“Ukraine denied responsibility for the incident, which took place at a moment of extreme tension between the two countries as Russia continues to deny statements from the United States and its allies that it could invade Ukraine at any time.”

“President Joe Biden plans to impose new sanctions on trade and financing in the two pro-Moscow territories that President Vladimir Putin decided to recognize as independent on Monday,” CNN reports. The order “will also provide authority to impose sanctions on any person determined to operate in those areas of Ukraine.”

If Russia invades, the U.S. is planning to bar “correspondent” banking relationships between key Russian banks and American financial institutions, Reuters’ Alexandra Alper and Karen Freifeld revealed. “The United States will also wield its most powerful sanctioning tool against certain Russian individuals and companies by placing them on the Specially Designated Nationals (SDN) list, effectively kicking them out of the U.S. banking system, banning their trade with Americans and freezing their U.S. assets.”

“Leave Putin in no doubt: Russia will be economically crippled – and he may be tried for war crimes,” by former Ukrainian Defense Minister Andriy Zagorodnyuk in The Guardian: “We believe, even with the very short time available, that it is still possible to stop Putin from starting war. But that largely depends on the steps made by world leaders in the next day or two. We know from studying the Russian decision-making process for years that they always choose from a few options available. While being very persistent with his end goals, Putin has adopted an agile approach: when he meets serious resistance, he will step back and adjust his actions.”

“The U.S. has told allies that any Russian invasion of Ukraine would potentially see it target multiple cities beyond the capital Kyiv,” Bloomberg reports.

“Cities that could also come under attack include Kharkiv in the northeast and Odessa and Kherson in the south, said the people, all Western officials who asked not to be identified talking about such sensitive matters. They did not provide details on the intelligence they said underlined these calculations.”

New York Times: “If he strikes to take the whole country in a single blow — the approach that senior American military and intelligence officials and many outside analysts now think is the most likely — it could provoke the largest, most violent battle for European territory since the Nazi surrender in 1945.”

“When President Biden declared he was convinced President Vladimir Putin of Russia had decided to attack Ukraine ‘in the coming week, in the coming days,’ the skeptics among American allies suddenly fell quiet. Hours before, Mr. Biden had informed them that American intelligence agencies had just learned that the Kremlin had given the order for Russian military units to proceed with an invasion,” the New York Times reports.

“Now the debate has shifted to how Mr. Putin will do it: in one massive nationwide attack; a series of bites that dismantle the country, piece by piece; or a pythonlike squeeze.”

David Leonhardt: “A Russian invasion of Ukraine seems likely to involve one of the world’s largest militaries launching an unprovoked ground invasion of a neighboring country. The apparent goal would be an expansion of regional dominance, either through annexation or the establishment of a puppet government.”

“Few other conflicts since World War II fit this description. Some of the closest analogies are the Soviet Union’s invasion of Afghanistan in the 1970s, Czechoslovakia in the 1960s and Hungary in the 1950s — as well as Vladimir Putin’s 2014 annexation of Crimea. The U.S., for its part, invaded Panama in the 1980s and used the C.I.A. to overthrow an elected government in Guatemala in the 1950s. Of course, it also launched several faraway wars, in Iraq, Vietnam and elsewhere.”

“But the world’s most powerful countries have rarely used force to expand their boundaries or set up client states in their region.”

David Ignatius: “Putin makes a perfect villain in this war. He’s brutal, arrogant and contemptuous of the rules of order that America and its allies celebrate. He told us what he was going to do, and he’s doing it. He is moving to take Ukraine hostage this week, which will leave three unpalatable choices. Either the West negotiates with the hostage-taker, which would be repugnant; the West frees the hostage by force; or we wait for the hostage-taker to become impoverished and fatigued, and quit the fight. This last outcome, which would be the best for the West, might also be the most likely — if the United States and its allies can be patient.”

“Still, there won’t be any good choices in the weeks and months ahead, only the consequences of bad ones that allowed Russia and the West to talk past each other, ducking the hard questions, for more than a decade.”

“Belarus announced Sunday that Russian forces would remain in the country after massive military drills ended, in a move that opposition figures said surrendered the country’s independence to Moscow without a shot being fired,” the Washington Post reports.

“Iran, the U.S. and other world powers are nearing a deal to revive the 2015 nuclear accord, although negotiators are still wrangling over significant final demands from Tehran, including the scope of sanctions relief,” the Wall Street Journal reports.

“An agreement could be finalized in Vienna within the next couple of days, said officials involved in the talks. President Biden has set restoring the agreement as a top foreign-policy goal. The White House views an agreement restraining Iran’s nuclear program as key to Middle East stability, allowing the U.S. to focus on China and Russia.”

Security officials will reinstall fencing around the Capitol next week ahead of President Biden’s State of the Union address, Fox News reports.  U.S. Capitol Police are bracing for a potential “Freedom Convoy” truck protest to Washington, D.C., for the March 1 speech.

New York Times: “As the stream of messages, most signed only Q, grew into a sprawling conspiracy theory, the mystery surrounding their authorship became a central fascination for its followers — who was the anonymous Q?”

“Now two teams of forensic linguists say their analysis of the Q texts shows that Paul Furber, one of the first online commentators to call attention to the earliest messages, actually played the lead role in writing them.”

“Sleuths hunting for the writer behind Q have increasingly overlooked Mr. Furber and focused their speculation on another QAnon booster: Ron Watkins, who operated a website where the Q messages began appearing in 2018 and is now running for Congress in Arizona. And the scientists say they found evidence to back up those suspicions as well. Mr. Watkins appears to have taken over from Mr. Furber at the beginning of 2018. Both deny writing as Q.”

The Atlantic: “Not surprisingly, interpretation of the results has depended on politics. Conservatives including Mike Pence, Bill Kristol, and the chair of the California Republican Party have claimed that the vote was another piece of evidence, on top of the Virginia gubernatorial race, that the Democratic Party is out of step not just with Republicans, but with its own constituents. Progressives rejected such conclusions, insisting that the recall was simply about competence and was driven by an only-in-San-Francisco set of circumstances.”

“The truth lies somewhere in between, but closer to the conservative view. At a minimum, the recall demonstrates that ‘woke’ racial politics have their limits, even in one of the wokest cities in the country.”

“A massive leak from one of the world’s biggest private banks, Credit Suisse, has exposed the hidden wealth of clients involved in torture, drug trafficking, money laundering, corruption and other serious crimes,” The Guardian reports.

“Details of accounts linked to 30,000 Credit Suisse clients all over the world are contained in the leak, which unmasks the beneficiaries of more than 100bn Swiss francs held in one of Switzerland’s best-known financial institutions.”

Donald Trump insisted in a statement that that the accounting firm Mazars USA — which severed ties with the Trump Organization last week — was “broken” by “Radical leftist racist prosecutors.”

New audio posted by 60 Minutes reveals what the noise linked to “Havana Syndrome” sounds like to those who have experienced the mysterious condition.

A flurry of new studies finds that people who have received a booster shot of Covid vaccine may not need another “for many months, and perhaps not for years,” the New York Times reports.

“Three doses of a Covid vaccine — or even just two — are enough to protect most people from serious illness and death for a long time, the studies suggest.”

“Although people over 65 or at high risk of illness may benefit from a fourth vaccine dose, it may be unnecessary for most people.”

John Harris: “A democracy really shouldn’t be mythologizing presidents at all…”

“Yes, by all means let’s keep a day off to reflect on lessons of the American past. But let’s make this about real history — an invitation to humility and renewed commitment to national purpose — rather than mythological history, an invitation to arrogance and complacency. A better name would be Citizens Day. It seems likely Lincoln himself would agree.”

The RNC wished past Republican presidents — including Abraham Lincoln, Richard Nixon and Donald Trump —  a happy Presidents Day.  But the message also included a masked photo of President Biden with the words “NOT YOU” in red capital letters.

“Less than a year after Democrats approved a half-trillion dollars in aid to state and local governments, many are now considering cutting taxes,” Politico reports.  “In red states as well as purple and blue ones, governors and state legislators are contemplating a long list of tax cuts: in personal income taxes and corporate levies, in property taxes and grocery taxes.”

“That’s sparking criticism Democrats in Washington gave too much money to states as part of their $1.9 trillion coronavirus relief package, signed into law one year ago next month.”