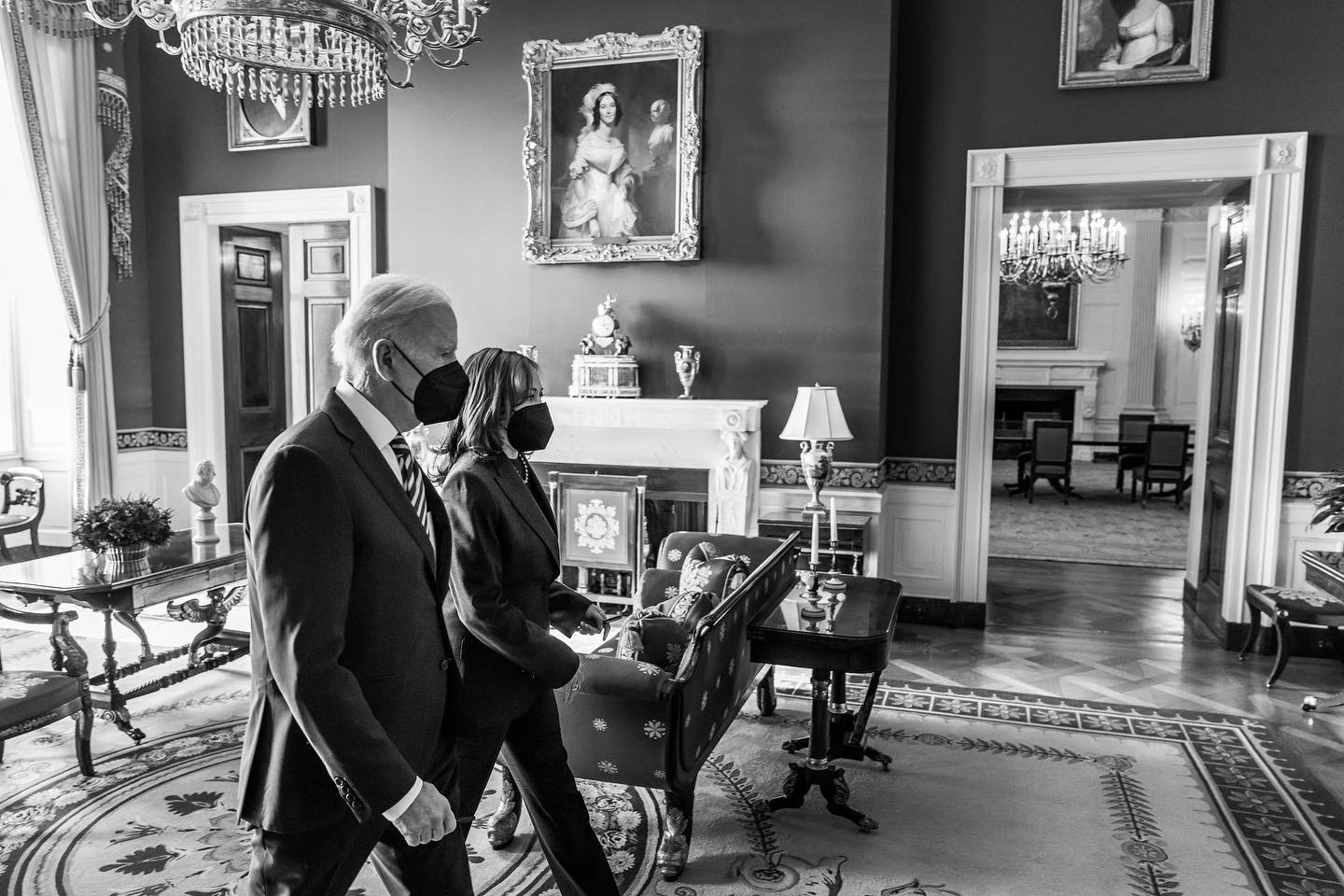 The Guardian: “Just 27 of the 335 congressional districts that have been drawn so far as part of the redistricting process are considered competitive – meaning either party has less than a five-point advantage – according to FiveThirtyEight. Dave Wasserman, an elections expert for the non-partisan Cook Political Report, told me he expects there to be 30 to 35 competitive seats in total once states finish drawing all 435 district boundaries. That means that as many as 94% of representatives would be running in relatively safe seats.”

Boston Globe: “In 2021, for the first time since the Federal Election Commission began keeping track, Black candidates topped both Democrat and Republican lists of biggest Senate fund-raisers in a quarter.”

“Primaries are always fucked up to some degree, but it’s different now. there’s more self-hate than there was before. Ten years ago, we’d argue about who was more pro-gun, who was more pro-life. Now, my clients are going RINO hunting, which is a level of disdain that was not there before in our party.”  — Republican strategist John Thomas, quoted by Politico.

Rep. Jim Hagedorn (R-MN) has died after a two-year long battle with kidney cancer, The Hill reports.  He was 59.

“Then the FBI showed up in January to search his home here in Laredo and the building that houses his campaign office.”

“Though the details of the investigation remain murky as Texas prepares to kick off the 2022 midterm primary calendar with the year’s first contests, Cuellar’s challenger, 28-year-old immigration attorney Jessica Cisneros, is seizing on the FBI probe in television advertisements and on the campaign trail. And progressives, sensing an opening to oust one of the House’s most conservative Democrats in a left-leaning district that the party would be favored to hold in the November general election, have rallied to her side.”

New York Times: “First, Wisconsin Republicans ordered an audit of the 2020 election. Then they passed a raft of new restrictions on voting. And in June, they authorized the nation’s only special counsel investigation into 2020.”

“Now, more than 15 months after former President Donald Trump lost the state by 20,682 votes, an increasingly vocal segment of the Republican Party is getting behind a new scheme: decertifying the results of the 2020 presidential election in hopes of reinstalling Mr. Trump in the White House.”

“Wisconsin is closer to the next federal election than the last, but the Republican effort to overturn the election results here is picking up steam rather than fading away — and spiraling further from reality as it goes.”

OHIO U.S. SENATOR. Politico: “According to interviews with more than 75 people — who have worked for him or against him or both, who like him or don’t like him or used to — Mandel has been nothing if not an eager reader and rider of political currents. And that, they say, has made Mandel a singularly vivid lens through which to chart the deep, rattling changes in politics, in Ohio, on the right and overall, over the course of this last quarter-century.

“He doesn’t act the way he used to act, and he doesn’t talk the way he used to talk, say so many Democrats and Republicans alike. And they’re right. He used to present as more moderate, used to preach bipartisanship and diversity and civility, and no longer does. Perhaps most importantly, he once was conspicuously unsupportive of Trump, and now he has publicly pivoted to full-fledged MAGA.”

“We all know guys who overcompensate for their inadequacies, and that description fits the guys in the Senate race to a T.”  — Ohio U.S. Senate candidate Jane Timken (R), in a new ad, pointing to photos of Republican primary rivals Josh Mandel (R) and J.D. Vance (R).

Businessman Mike Gibbons’ new ad for the May Republican primary attacks two of his foes, venture capitalist J.D. Vance and former state party chair Jane Timken, as “no different from Democrats.” The narrator notes that Vance once called Donald Trump an “idiot” and highlights Timken’s brief defense of Rep. Anthony Gonzalez after the congressman voted for impeachment; he then praises Gibbons as “Trump tough.”

“Thousands of applications for mail-in ballots submitted by Texas voters have been delayed — and some voters may ultimately not receive ballots — because Lt. Gov. Dan Patrick’s (R) campaign instructed eligible voters to send requests for absentee ballots to the Texas secretary of state’s office instead of their local elections offices,” the Texas Tribune reports.

ARIZONA U.S. SENATOR. Politico: “With time winding down toward the state’s candidate filing deadline, the political class in Arizona and D.C. is scrutinizing Ducey’s every move — aware that his decision looms as the last major piece of the 2022 Senate campaign puzzle.”

“The GOP’s chances of flipping the seat held by Democratic Sen. Mark Kelly — a key contest in the party’s fight for the Senate majority — are viewed by many in both parties as even better with Ducey, who has been elected statewide three times, than the current cast of MAGA Republicans in the race.”

Texas State House candidate Justin Berry (R) was among 19 Austin, Texas police officers indicted over alleged use of excessive force during 2020 protests in the city, the Texas Tribune reports.

TEXAS 15TH CD. Donald Trump offered his “Complete and Total Endorsement” of Monica De La Cruz (R), a congressional candidate in Texas “whose campaign has been dogged by an allegation that she was abusive toward her estranged husband’s daughter,” the Washington Post reports.

ARKANSAS U.S. SENATOR. “Sen. John Boozman (R-AR) voted with former President Trump more than 91 percent of the time and snapped up an early 2022 endorsement and a donation from his PAC,” The Hill reports.

“But as Boozman seeks a third term for his reliably red Senate seat, his primary opponents are coming after him by trying to paint themselves, and not the 71 year old, as the real Trump candidate.”

IDAHO GOVERNOR. Far-right anti-government militant Ammon Bundy announced Thursday that he was ending his Republican primary campaign​​ against incumbent Brad Little in order to run as an independent. Bundy denied that he’d left the nomination fight as part of a deal with Trump-backed Lt. Gov. Janice McGeachin, who is Little’s main intra-party foe.

WISCONSIN GOVERNOR. In a truly unsurprising development, former Gov. Scott Walker has endorsed his former lieutenant governor, Rebecca Kleefisch, in the August Republican primary. Meanwhile, businessman Jonathan Wichmann, who never gained much traction in the contest, has dropped out in favor of running for lieutenant governor.

ALABAMA U.S. SENATOR. Former Business Council of Alabama head Katie Boyd Britt’s new commercial for the May Republican primary features her standing in an empty school classroom and trashing Joe Biden and Anthony Fauci, saying, “[i]n the Senate, I’ll tell all those boys in Washington to man up, get our economy going, and get kids and God back in the classroom.” We’re assuming the “man up” line isn’t intended as a homage to Selina Mayer.

Donald Trump met with Britt at Mar-a-Lago on Tuesday, Politico reports. “The former president has been having buyer’s remorse after endorsing Rep. Mo Brooks for Senate, watching with frustration as Brooks has failed to catch fire with the MAGA base.”

“Brooks, who has struggled with disappointing fundraising and poll numbers, recently hit the ‘reset’ button on his campaign, hiring a new campaign team. But even as Brooks tries to recover, Trump, we’re told, has complained to associates that Brooks has been working with anti-Trumpers and — worse, in his eyes — has been seeking the endorsement of Jeff Sessions, the former Alabama senator and A.G. Trump loathes Sessions for recusing himself from the Justice Department’s Russia investigation.”

“Brooks recently called Sessions ‘one of the best senators we ever had.’”

LOS ANGELES MAYOR. UC Berkeley, polling on behalf of the Los Angeles Times, is out with the first survey we’ve seen all year of the crowded June nonpartisan primary, and it puts Rep. Karen Bass far ahead with 32%. Billionaire developer Rick Caruso and City Councilman Kevin de León are deadlocked 8-8 for the second spot in the likely November general election, while City Councilman Joe Buscaino and City Attorney Mike Feuer each took 4%. The poll was conducted Feb. 3-10, and Caruso announced his campaign the following day.

NEVADA U.S. SENATOR. The Club for Growth is airing a spot in the Reno media market, which is home to about a quarter of the state’s residents, reminding viewers that former state Attorney General Adam Laxalt is Donald Trump’s endorsed candidate; there is no word on the size of the buy.

Laxalt is the clear favorite to win the June Republican primary to take on Democratic Sen. Catherine Cortez Masto, but he faces a surprisingly well-funded intra-party opponent in the form of Army veteran Sam Brown. Laxalt outraised Brown just $1.3 million to $1 million during the fourth quarter, but he still had a considerably larger $1.7 million to $732,000 cash-on-hand advantage. Cortez Masto herself brought in $3.3 million and had $10.5 million to spend.

PENNSYLVANIA LT. GOVERNOR. Teddy Daniels (R) is running for Pennsylvania lieutenant governor as an award-winning police officer, but court records and news archives obtained by Rolling Stone reveal he was caught committing “unbecoming conduct” at one police department and suspended at another.

In addition, Daniels’ ex-wife claimed in court that he was “physically and mentally abusive” during their marriage and later harassed her at her workplace, and both she and another woman have accused him of being negligent in paying child support.

WYOMING AT LARGE CD. “Former President Donald Trump and his allies have been privately lobbying Wyoming lawmakers to change the state’s election laws as part of an effort to unseat Rep. Liz Cheney (R-WY),” Politico reports.

“On Thursday, Trump endorsed Wyoming legislation that would prevent crossover voting in a primary election. Were the law to pass, Democrats, Republicans, or independents would no longer be able to switch party affiliation on the day of the state’s primary to vote for a candidate in another party.”