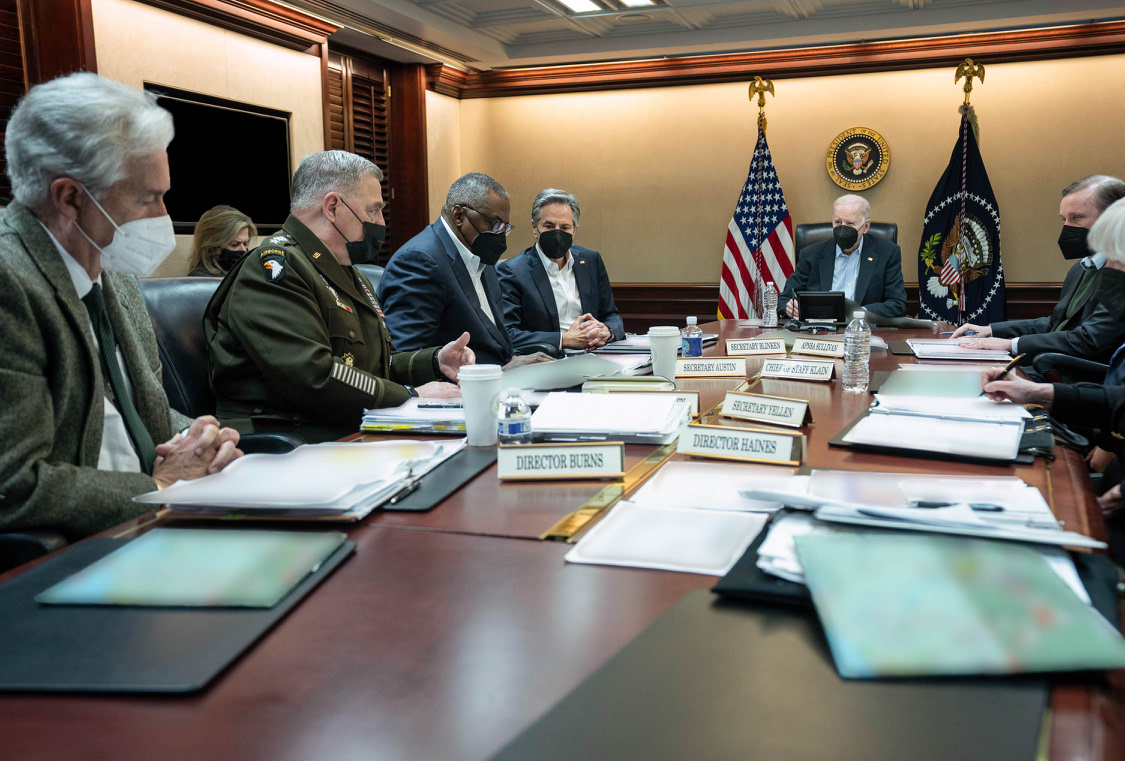 U.S. intelligence has information indicating that Russian military commanders have been given orders to proceed with an invasion of Ukraine, CBS News reports.

Meanwhile, CNN reports Russia now has “close to 75% of its conventional forces postured against Ukraine. The concentration of forces within striking distance of Ukraine is highly unusual and part of the reason the US believes Russia is ready to attack.”

“A day of last-minute diplomacy by French President Emmanuel Macron on Sunday appeared to give some new hope for a peaceful resolution over Ukraine as White House officials said President Biden would be willing to consider direct talks with his Russian counterpart as long as Russia does not invade,” the New York Times reports.

“White House officials said a possible summit between Mr. Biden and President Vladimir V. Putin of Russia would only be held after meetings between the foreign ministers of the two countries, which are tentatively scheduled for later this week.”

Washington Post: “Belarus’s defense minister extended military exercises with Russian forces that were otherwise set to end Sunday, and announced a joint task force to ‘fight back if necessary.’”

“The announcement that Russian forces would not return to base as planned contradicted the country’s previous assertion that not a single Russian troop or piece of equipment would remain after the drill. Before the exercise began 10 days ago, Western military analysts warned that it could be cover for an attack force to invade Ukraine from the north and potentially encircle the capital Kyiv.”

New York Times: “The apparent extension of the exercises — which NATO has said involve 30,000 Russian troops, Moscow’s largest deployment on Belarus territory since the end of the Cold War — put further pressure on Ukraine, which shares a roughly 665-mile border with Belarus that is largely unguarded.”

Washington Post: “Analysts looking at Russia’s menacing buildup of troops on Ukraine’s borders have long circled Feb. 20 as a day to watch for potential action. Sunday marks the confluence of several events and milestones that some think could — amid the feverish guessing game surrounding the standoff — hold deeper meaning.”

“President Joe Biden abruptly canceled plans on Sunday to go to his home in Delaware for the holiday following a four-hour meeting of his national security team to discuss the Russian threat to Ukraine,” CNBC reports.

The U.S. embassy in Moscow issued a security warning regarding possible threats in Moscow and St. Petersburg.

“The United States has informed the United Nations it has credible information showing that Moscow is compiling lists of Ukrainians ‘to be killed or sent to camps following a military occupation,’” the Washington Post reports.

“The letter alleges that Moscow’s post-invasion planning would involve torture, forced disappearances and ‘widespread human suffering.’ It does not describe the nature of the intelligence that undergirds its assessment.”

“Secretary of State Antony Blinken said on Sunday that President Biden was still willing to talk to President Vladimir Putin of Russia despite the U.S. government’s assessment that Mr. Putin has already decided to invade Ukraine,” the New York Times reports.

Said Blinken: “We believe President Putin has made the decision, but until the tanks are actually rolling, and the planes are flying, we will use every opportunity and every minute we have to see if diplomacy can still dissuade President Putin from carrying this forward.”

British Prime Minister Boris Johnson told the BBC that evidence suggests Russia is planning “the biggest war in Europe since 1945.” He added: “All the signs are that the plan has already in some senses begun.”

“President Biden and Vladimir Putin are each trying to shape the narrative of what is happening in Ukraine and get inside the heads of a global audience — and each other — to gain the upper hand in an information war as a possible prelude to a real one,” Axios reports.

“U.S. officials say Putin is stoking disinformation in order to blame Ukraine if Russia invades. The White House is trying to announce Putin’s plays before he runs them — a novel and risky strategy they hope might stave off an invasion, or at least help unify the international community against it.”

Said Zelenskyy: “It was here 15 years ago that Russia announced its intention to challenge global security. What did the world say? Appeasement. Result? At least: the annexation of Crimea and aggression against my state.”

He added:”We will defend our land with or without the support of partners. Whether they give us hundreds of modern weapons or 5,000 helmets. We appreciate any help, but everyone should understand that these are not charitable contributions … These are not noble gestures for which Ukraine should bow low. This is your contribution to the security of Europe and the world.”

The United Kingdom and the United States could take steps to prevent Russian companies from trading in British pounds and U.S. dollars if Russian President Vladimir Putin invades Ukraine, the BBC reports.

The Guardian reports that London-listed Russian firms are likely to be on the list of establishments targeted by possible sanctions.

British Foreign Secretary Liz Truss told the Daily Mail that Russian President Vladimir Putin “will not stop at Ukraine,” warning that neighboring countries could be targeted if the international community fails to “stand up” to what she called “Russian aggression.”

Said Truss: “It could be Ukraine next week, but then which country will it be next?”

Donald Trump’s new social media venture, Truth Social, appears set to launch in Apple’s App Store on Monday, Reuters reports. The launch would restore Trump’s presence on social media more than a year after he was banned from Twitter.

“U.S. health regulators are looking at potentially authorizing a fourth dose of a Covid-19 vaccine in the fall,“ the Wall Street Journal reports.

“The planning is still in early stages, and authorization would depend on ongoing studies establishing that a fourth dose would shore up people’s molecular defenses that waned after their first booster and reduce their risk of symptomatic and severe disease.”

The Atlantic: “The end state of this pandemic may indeed be one where COVID comes to look something like the flu. Both diseases, after all, are caused by a dangerous respiratory virus that ebbs and flows in seasonal cycles.”

“But I’d propose a different metaphor to help us think about our tenuous moment: The ‘new normal’ will arrive when we acknowledge that COVID’s risks have become more in line with those of smoking cigarettes—and that many COVID deaths, like many smoking-related deaths, could be prevented with a single intervention. The pandemic’s greatest source of danger has transformed from a pathogen into a behavior. Choosing not to get vaccinated against COVID is, right now, a modifiable health risk on par with smoking.”

Texas Tribune: “Patrick encouraged Perry, Texas’ governor from 2000 to 2015, to make a comeback and run again, even though fellow Republican Gov. Greg Abbott was already campaigning for election to a third term.”

“Perry ultimately opted against running. But the plotting against Abbott, which has not been previously reported, was perhaps the most brazen example of Patrick’s efforts this election cycle to handpick a roster of allies across all levels of state government and expand his already massive influence. Often, he has done so by weaponizing his close relationship with former President Donald Trump to help elect his friends and hurt his adversaries.”

Queen Elizabeth has tested positive for Covid-19, The Guardian reports.  It was confirmed she had been in direct contact with her eldest son and heir, the Prince of Wales, the week he had the disease.

“Former president Donald Trump’s company is angling to host events at his golf courses for the controversial Saudi golf league, according to three people familiar with the matter, potentially handing Trump a lucrative business partnership with an oppressive regime he defended as president,” the Washington Post reports.

“The financial terms of the proposed deal are unclear, but the events would undoubtedly provide revenue for Trump through the Saudis, who are making a fierce bid to recruit PGA Tour players and launch a series of golf tournaments.”