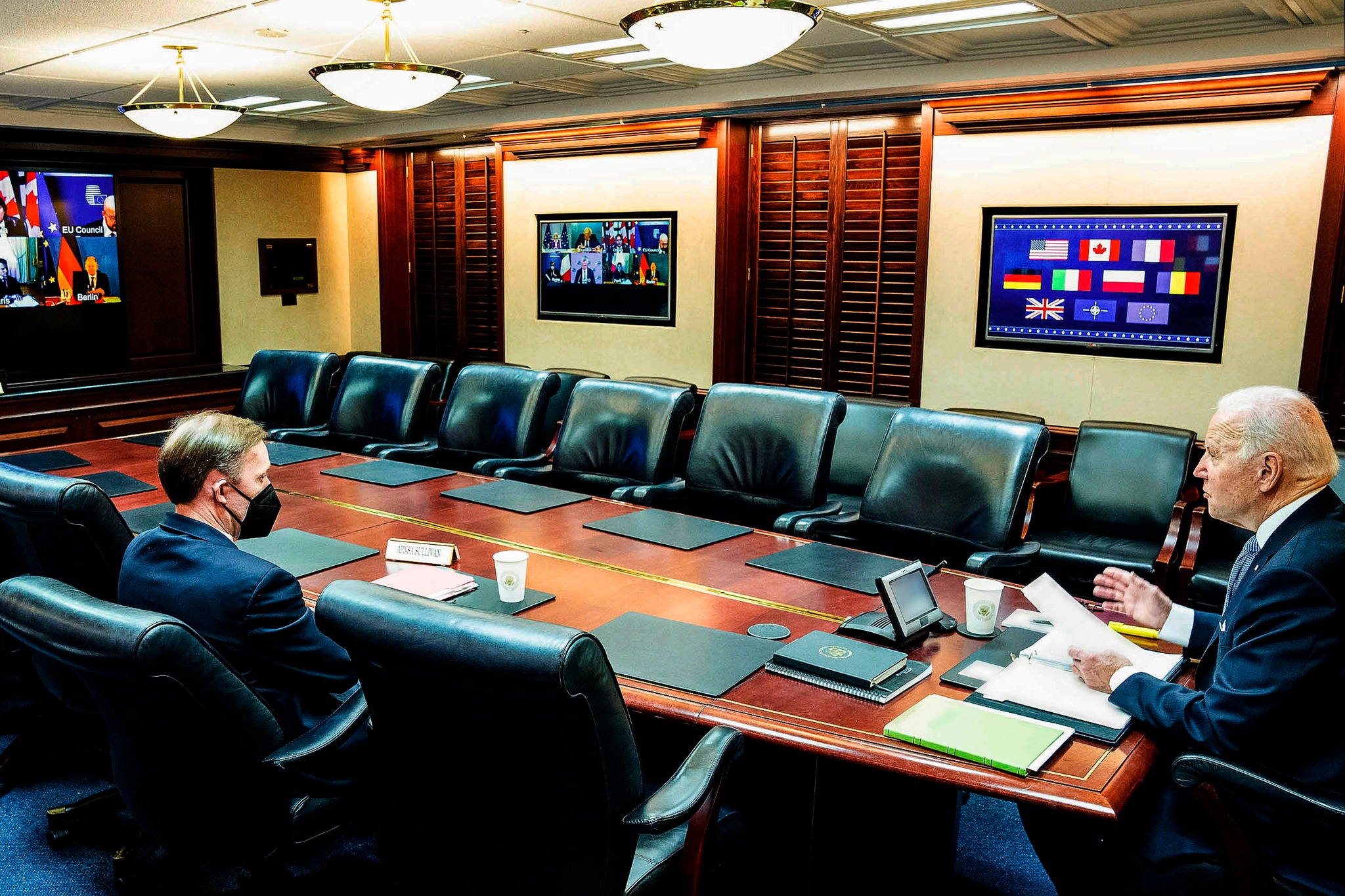 “The threat of renewed war in Ukraine, lingering for weeks, escalated Saturday as shelling and military preparations by Russia-backed separatists picked up in the country’s contested east,” the Washington Post reports.

“Russia has been accused time and again of secretly carrying out acts that it blamed on others to justify previous military action in Chechnya, Georgia and Ukraine.”

“Russia Saturday test-launched ballistic and cruise missiles in what it described as strategic deterrence exercises, a pointed reminder of its ability to wage nuclear war amid a standoff with the West over Ukraine,” the Wall Street Journal reports.

“Separatist leaders in eastern Ukraine ordered a full military mobilization Saturday amid a spike of violence in the war-torn region and fears in the West that Russia might use the strife as a pretext for an invasion,” the AP reports.

“Vice President Kamala Harris warned in a speech that the U.S. would impose severe economic sanctions on Russia if it invades Ukraine as she sought to highlight the resolve of Western powers in seeking to avert a major conflict,” the Los Angeles Times reports.

Said Harris: “Let me be clear, I can say with absolute certainty if Russia further invades Ukraine the United States, together with our allies and partners, will impose significant and unprecedented economic costs.”

U.S. intelligence shows that Russia has drafted lists of Ukrainian politicians and Russian and Belarusian dissidents in exile to arrest or kill if it invades, Foreign Policy reports.

Foreign Affairs: “U.S. and European leaders would face the dual challenge of rethinking European security and of not being drawn into a larger war with Russia. All sides would have to consider the potential of nuclear-armed adversaries in direct confrontation.”

Fiona Hill: “I think they’re handling it as well as they can be, given the circumstances. Writ large, what the administration is doing right now is certainly what I would recommend doing. But I don’t know whether we can say if it’s going to work or not. The real test is going to be over a long period of time. I don’t think this is going to be a short, sharp crisis.”

“Putin’s been trying to get a grip on Ukraine for years now. They cut off the gas to Ukraine in 2006. He’s been in power for 22 years, and the whole of that time, he’s had Ukraine in the cross hairs one way or another, and it’s intensified over time. Putin wants to be the person who, on his watch, in his presidency, pulls Ukraine back into Russia’s orbit. And he could be president until 2036, in terms of what’s possible for him.”

“The National Archives confirmed on Friday that it had uncovered classified information among documents that President Donald Trump had taken with him to his home in Florida from the White House and that it had consulted with the Justice Department about the matter,” the New  York Times reports.

“The disclosure that Mr. Trump had classified information among the documents he took with him from the White House has prompted assertions from Democrats of hypocrisy. Mr. Trump made attacking Hillary Clinton’s mishandling of national security materials a centerpiece of his 2016 presidential campaign.”

“Civil lawsuits seeking to hold Donald Trump accountable for the January 6 insurrection can move forward in court, and the ex-President doesn’t have absolute immunity from litigation, a federal judge ruled Friday,” CNN reports.

“Democratic members of the House and police officers who defended the US Capitol on January 6 sued Trump, claiming he prompted his supporters to attack. Friday, Mehta wrote that the lawsuits could move to the evidence-gathering phase and toward a trial – a major loss in court for Trump.”

“Former President Donald Trump faced one legal setback after another this week as a judge ruled he must sit for a deposition in New York to answer questions about his business practices, his accounting firm declared his financial statements unreliable, another judge rejected his efforts to dismiss conspiracy lawsuits and the National Archives confirmed that he took classified information to Florida as he left White House,” the AP reports.

The Capitol Police briefed staff on the House Administration and Senate Rules Committees about a potential trucker protest in Washington, D.C., Politico reports.

Metropolitan Police Department officers were told they would not be able to take time off between Feb. 22 and March 5 as local authorities geared up for a potential protest convoy.

“Police aggressively pushed back protesters in Canada’s besieged capital on Saturday, seizing trucks and finally retaking control of the streets in front of the country’s Parliament building,” the AP reports.

“Police arrested scores of demonstrators and towed away vehicles Friday in Canada’s besieged capital, and a stream of trucks started leaving under the pressure, raising authorities’ hopes for an end to the three-week protest against the country’s Covid-19 restrictions,” the AP reports.

“By evening, at least 100 people had been arrested, mostly on mischief charges, and nearly two dozen vehicles had been towed, including all of those blocking one of the city’s major streets, authorities said. One officer had a minor injury, but no protesters were hurt.”

“President Joe Biden is actively looking for Republican support for his Supreme Court nominee. But he’s doing it cautiously, wary of setting expectations that end in failure,” Politico reports.

“Neither party anticipates the type of rancorous, ugly battle that has defined recent high court picks, but White House officials are trying to handle conversations with GOP lawmakers delicately in a way that avoids unwanted attention.”

“To hear President Biden tell it, his Build Back Better plan is ‘close’ to passing the Senate and delivering relief to Americans struggling with the cost of prescription drugs. He has talked this month of how it would cap child-care costs for many Americans and how utility companies are embracing its climate and energy initiatives!” the Washington Post reports.

“But it’s not clear such a plan exists anymore, at least in any recognizable form. Behind the scenes, discussions between the White House and key senators on what was once a massive climate and social spending package have virtually evaporated.”

“Virginia’s new Republican Attorney General ended a legal campaign to get the federal government to recognize the state’s ratification of the landmark Equal Rights Amendment, the long-running effort to enshrine women’s equality in the Constitution,” the Washington Post reports.

California Gov. Gavin Newsom (D) announced he will support legislation that would allow for private citizens to go after gun makers, enforcing the state’s ban on assault weapons, The Hill reports.

Jack Shafer: “Perhaps as Palin’s attorneys prepare their briefs and the press corps reassembles the legal challenge, we’ll get a proper idea of why she sued in the first place — because nothing in her three-and-a-half hours on the stand in the one-week trial provided much of a clue. Substitute gym teachers put more industry in their work than Palin did in her testimony. What gives in a case that may have already cost Palin’s side up to $2 million in legal fees?”

Former vice president Mike Pence on Thursday defended the Republican National Committee’s resolution to censure two of the party’s members of Congress, saying that the declaration’s reference to “citizens who engaged in legitimate political discourse” during the Jan. 6, 2021, insurrection has been misinterpreted, the Washington Post reports.

All members of Congress will be permitted to attend State of the Union address on March 1, per the Capitol physician, Punchbowl News reports.

“A New York State trooper who testified that former Gov. Andrew Cuomo sexually harassed her has filed a lawsuit Thursday asking a federal court to declare that Cuomo, a top aide and state police violated her civil rights,” the AP reports.

“Honestly, it is a shit show. It’s scandalizing, every single day. What is surprising to me is how it never stops being scandalizing.” — Rep. Alexandria Ocasio-Cortez (D-NY), in a New Yorker interview, on the general atmosphere of working in Congress.

“Sen. Ron Johnson (R-WI) announced this week that he will block one of President Joe Biden’s judicial nominees, William Pocan, which is weird since Johnson recommended him to the White House in the first place,” the HuffPost reports.

“Biden nominated Pocan, a Milwaukee state judge, to a seat on the U.S. District Court for the Eastern District of Wisconsin after Johnson and Sen. Tammy Baldwin (D-WI) recommended him to the White House in June.”

Gallup: “The percentage of U.S. adults who self-identify as lesbian, gay, bisexual, transgender or something other than heterosexual has increased to a new high of 7.1%, which is double the percentage from 2012, when Gallup first measured it.”

The Baltimore Sun published an apology for the newspaper’s lengthy history of racism, dating back to classified ads selling slaves or offering bounties on escaped slaves.

David French: “So that’s why San Francisco matters. Not because its eighth-grade math curriculum is relevant to me in Tennessee—and not because I particularly care what it calls its schools—but because when the exhausted majority stood up, it demonstrated that reason can, in fact, triumph over radicalism. America’s political future does not necessarily belong to its angry extremes.”