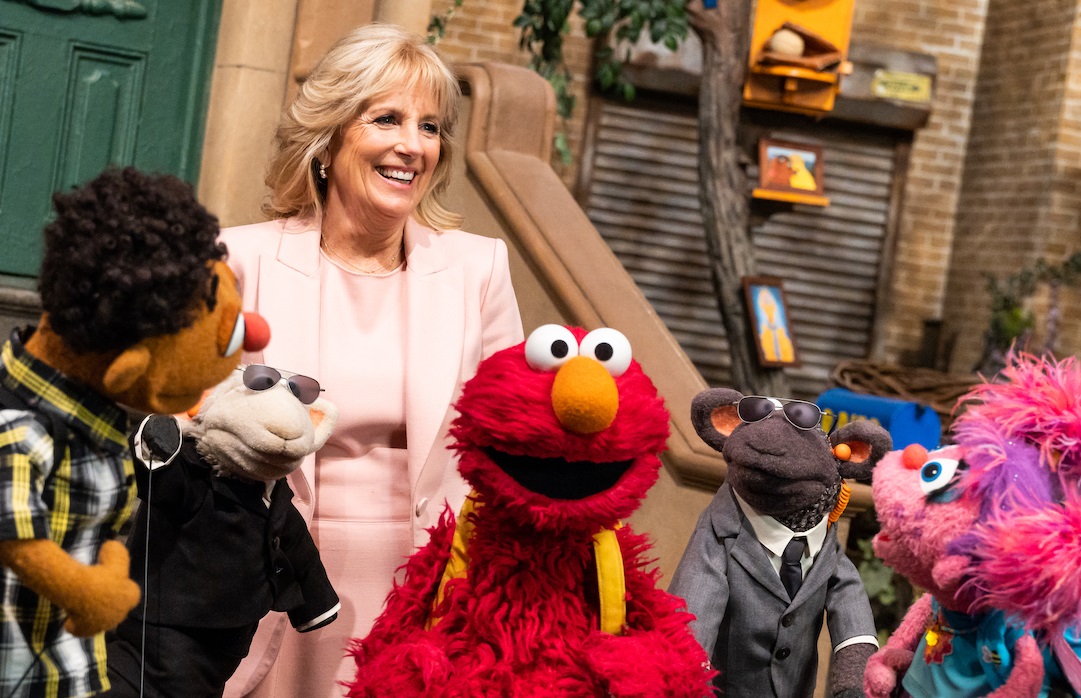 A new Politico/Morning Consult poll finds just 39% of Americans say they approve of President Biden’s handling of the pandemic.

Politico/Morning Consult: “Democratic governors have been trying to get ahead of pandemic fatigue by lifting mask mandates around the country. The country is moving further and further in that direction. Forty-nine percent of voters want mask mandates removed, while 43% say it is too early for states to rescind their mask mandates.”

“The tricky part for Democrats is that their voters are divided on the issue. A majority of Democrats still want mandates in place.”

Key takeaway: “In the teeth of the pandemic, anti-masking sentiment was a fringe obsession limited to the right. But with the Omicron surge subsiding, it’s now mainstream — and growing in popularity.”

Democrats’ own research shows that some battleground voters think the party is “preachy,” “judgmental” and “focused on culture wars,” Politico reports.

“And the party’s House campaign arm had a stark warning for Democrats: Unless they more forcefully confront the GOP’s ‘alarmingly potent’ culture war attacks, from critical race theory to defunding the police, they risk losing significant ground to Republicans in the midterms.”

“Voting for the 2022 midterms is already underway, and the nation’s top election officials are caught fighting a two-front war: Battling disinformation stemming from the last election, while simultaneously preparing for the next one,” Politico reports.

“The officials are no longer just running elections. They’ve become full-time myth-busters, contending with information threats coming from the other side of the globe — and their own ranks.”

Washington Gov. Jay Inslee’s (D) novel and controversial proposal to tamp down on election lies by candidates and elected officials will not move forward this year, the Seattle Times reports.

The bill would have created a gross misdemeanor penalty for elected officials or candidates who “knowingly, recklessly or maliciously” lie about results of an election if those falsehoods led to violence.

“The landslide decision means board President Gabriela López and members Alison Collins and Faauuga Moliga will officially be removed from office and replaced by mayoral appointments 10 days after the election is officially accepted by the Board of Supervisors.”

Mark Barabak: “San Francisco is quite familiar with earthquakes, and what happened Tuesday — the ouster of three extreme lefties from the Board of Education — was not one of those. Earthquakes are sudden and unexpected. The result of Tuesday’s recall was neither.”

“The removal of board members Gabriela López, Faauuga Moliga and Alison Collins was destined the moment the city’s liberal establishment, led by Mayor London Breed, joined the effort along with several discontented millionaires, who threw in loads of cash.”

“What happened Tuesday was more a foreshock, a warning — as if Democrats needed any more of those — that November’s midterm elections could be very bad indeed, as parents unsettled by two years of pandemic-related upheaval vent their frustrations at the polls.”

“San Francisco is so famous for its liberalism that the city has become shorthand for eccentric political sensibilities far to the left of most Americans,” the Los Angeles Times reports. “But after Tuesday’s trio of school board recalls, Democrats and Republicans alike see the city not as an outlier, but as a potential bellwether.”

“Greitens, who resigned mid-term in 2018, has led the crowded Republican field in early polling for the state’s open Senate seat. But according to a recent survey… Greitens would have just a slim lead over Democrat Lucas Kunce if the general election were held today.”

Playbook: “For months, many Republican operatives across the political spectrum — from MAGA world and the RNC to the NRSC and Team Mitch — have privately whispered agreement on one thing when it comes to Missouri’s crowded Senate GOP primary: They’d welcome any nominee except Eric Greitens.”

“The disgraced former governor of the Show-Me State resigned in 2018 after a woman testified under oath that Greitens tied her up in his basement, stripped her naked and took photos of her to use as blackmail in their extramarital affair — before forcing her to have oral sex with him. Greitens maintains that the exchange was consensual.”

“Despite that history — and despite a number of other prominent Republicans in the race — Greitens leads the pack in Missouri’s GOP primary. Party operatives know that if they want to stop him, they need to clear the field so that the anti-Greitens vote isn’t fragmented. But they’re at a loss over how to do that. None of the prominent candidates shows any sign of dropping out anytime soon.”

OHIO U.S. SENATOR. Sen. Rob Portman (R-OH) will back former Ohio Republican Party chairwoman Jane Timken (R) as his chosen successor in an attempt to boost her through a crowded GOP field later this year, The Hill reports.

Portman is the most prominent name to take sides in the nomination fight, but everyone is still waiting to see if Donald Trump will end up issuing an endorsement in the next two and a half months in a contest where he’s reportedly far from happy with any of his choices.

Trump, multiple media outlets said, actually decided to back Timken last year, and the Washington Post adds that he even called her about a year ago to deliver the good news. But that not-tweet never went out, and Politico’s Alex Isenstadt writes that it’s because Trump abruptly changed his mind when Timken initially defended Rep. Anthony Gonzalez after he voted for impeachment, with the then-party chair saying that the congressman had a “rational reason why he voted that way. I think he’s an effective legislator, and he’s a very good person.” She quickly reversed herself and called for Gonzalez’s resignation, but she didn’t move fast enough to keep Trump in her corner or stop the Club for Growth from turning the story into an anti-Timken ad.

The good news for Timken, though, is that Trump, according to Isenstadt, doesn’t seem to like anyone running in the Ohio Senate race. The story even says that Trump, who “has expressed concern to allies about the quality of the pro-Trump candidates,” has speculated that another candidate could enter the race, something Isenstadt notes can’t actually happen because the filing deadline passed on Feb. 2. The candidate Trump hates the most is state Sen. Matt Dolan, who co-owns Cleveland’s Major League Baseball franchise: The GOP leader last year promised to never back Dolan because of the team’s plans to change its name, and Isenstadt now characterizes Trump as utterly intent on stopping him.

Former state Treasurer Josh Mandel has avoided any public abuse, but a recent Daily Beast story says that Trump privately “has for months told people close to him that he thinks Mandel is a charisma-free weirdo and dork” and that he’s “even spent an inordinate amount of time gossiping with a large array of advisers and close associates about unconfirmed details of Mandel’s sex life.” (Thankfully, there are no details.) There’s no word yet what Trump has against the remaining notable Republicans in the running, businessman Mike Gibbons and venture capitalist J.D. Vance, though Vance’s intra-party enemies have spent a great effort hitting him over his old anti-MAGA proclamations.

FiveThirtyEight: “This year, 27 secretaries of state and 30 attorneys general will be elected nationwide (other states either elect them in other years or don’t elect them at all). And since the secretaries of state and attorneys general who are elected in 2022 will wield power in 2024, this year’s elections could plunge our democracy into further danger if would-be election subverters win them.”

Larry Sabato’s Crystal Ball: “More than 20% of the nation’s counties gave 80% or more of its 2-party presidential votes to either Donald Trump or Joe Biden.”

“Trump won the vast majority of these counties, but because Biden’s blowout counties are much more populous, he got many more votes out of his ‘super landslide’ counties than Trump got out of his.”

“Trump’s blowouts were concentrated in white, rural counties in the Greater South, Interior West, and Great Plains, while Biden’s were in a smattering of big cities, college towns, and smaller counties with large percentages of heavily Democratic nonwhite voters.”

“Many in Gotham’s tight-knit political class immediately assigned an asterisk to her name and predicted that Ms. Hochul, a moderate from Buffalo with a penchant for making friends but not headlines, would struggle in a pitched primary battle to hold onto the job.”

“The former president’s decision to bombard donors with numerous daily emails and texts is sucking up record sums. Four top GOP digital strategists tell Axios it’s also imperiling efforts to build a sustainable, grassroots base of financial support for anyone not named Trump.”

“Some Democrats here in rural Pennsylvania are afraid to tell you they’re Democrats,” the AP reports.

“The party’s brand is so toxic in the small towns 100 miles northeast of Pittsburgh that some liberals have removed bumper stickers and yard signs and refuse to acknowledge their party affiliation publicly. These Democrats are used to being outnumbered by the local Republican majority, but as their numbers continue to dwindle, the few that remain are feeling increasingly isolated and unwelcome in their own communities.”

“His 2020 campaign remarks have figured prominently in attacks by Abbott and are familiar to many voters in a state where Democrats also proudly own guns. Mr. O’Rourke counts himself among their number — he and his wife own firearms, his campaign said — and he appears well aware of the liability.”

The commercial argues that Gohmert has skipped numerous votes, though still showed up “to vote himself a pay raise.” The spot then tries to portray the congressman, who has long been one of the far-right’s champions in the House, as insufficiently conservative: “He showed up to add almost $1 trillion to our national debt,” says the narrator, “and Louie Gohmert spent billions on wasteful earmarks and Obama’s liberal agenda.”

“The House GOP’s messaging chief is starting to win over her doubters on the right by taking a different approach from her predecessors: directing rank-and-file members to conservative media outlets,” Politico reports.

“Since Rep. Elise Stefanik took over as House Republican Conference chair after Rep. Liz Cheney’s ouster, she’s made a point to prioritize the megaphones of the party’s base. Stefanik has hosted multiple events and press calls over the past few months that have cherry-picked attendance lists.”

“She holds weekly streamed news conferences, alongside colleagues, but her office at times restricts others’ invitations solely to conservative media, even excluding certain reporters from outlets whose coverage has miffed them.”

Liz Cheney and Adam Kinzinger received donations from thousands of grassroots supporters who helped fund Joe Biden’s presidential campaign, revealing how Democrats are willing to cross party lines to back Republican lawmakers that have broken with Donald Trump over the January 6 riots, the Financial Times reports.

Former Sen. David Perdue (R), who is running for governor of Georgia, compared former president Donald Trump’s Twitter ban to Nazi Germany in an interview, the Jerusalem Post reports.  Said Perdue: “When individual citizens lose the right of free voice, then we turn into a Germany in 1933, a Russia in 1919, Cuba in 1959 and Venezuela today.”

Former President Donald Trump released a statement slamming Sen. Susan Collins (R-ME) and claiming “she would have had no chance to win” her 2020 reelection if he’d gotten involved, Politico reports.  Said Trump: “But I remained silent and positive and allowed her to have her victory. She would have lost in a landslide. Gee, aren’t I nice?”

Of the 143 Republican congressional candidates in Texas, just 13 told the Houston Chronicle that President Biden’s victory in 2020 was legitimate.

Fargo Forum on a term limits measure pending in North Dakota: “The constitutional measure would set an eight-year cap on service by the governor and state legislators, though lawmakers could serve up to eight years each in the House of Representatives and the Senate.”

“The petition also includes a grandfather clause for anyone currently serving in state government, so the clock wouldn’t start ticking on their tenures until after voters approve the term limits.”