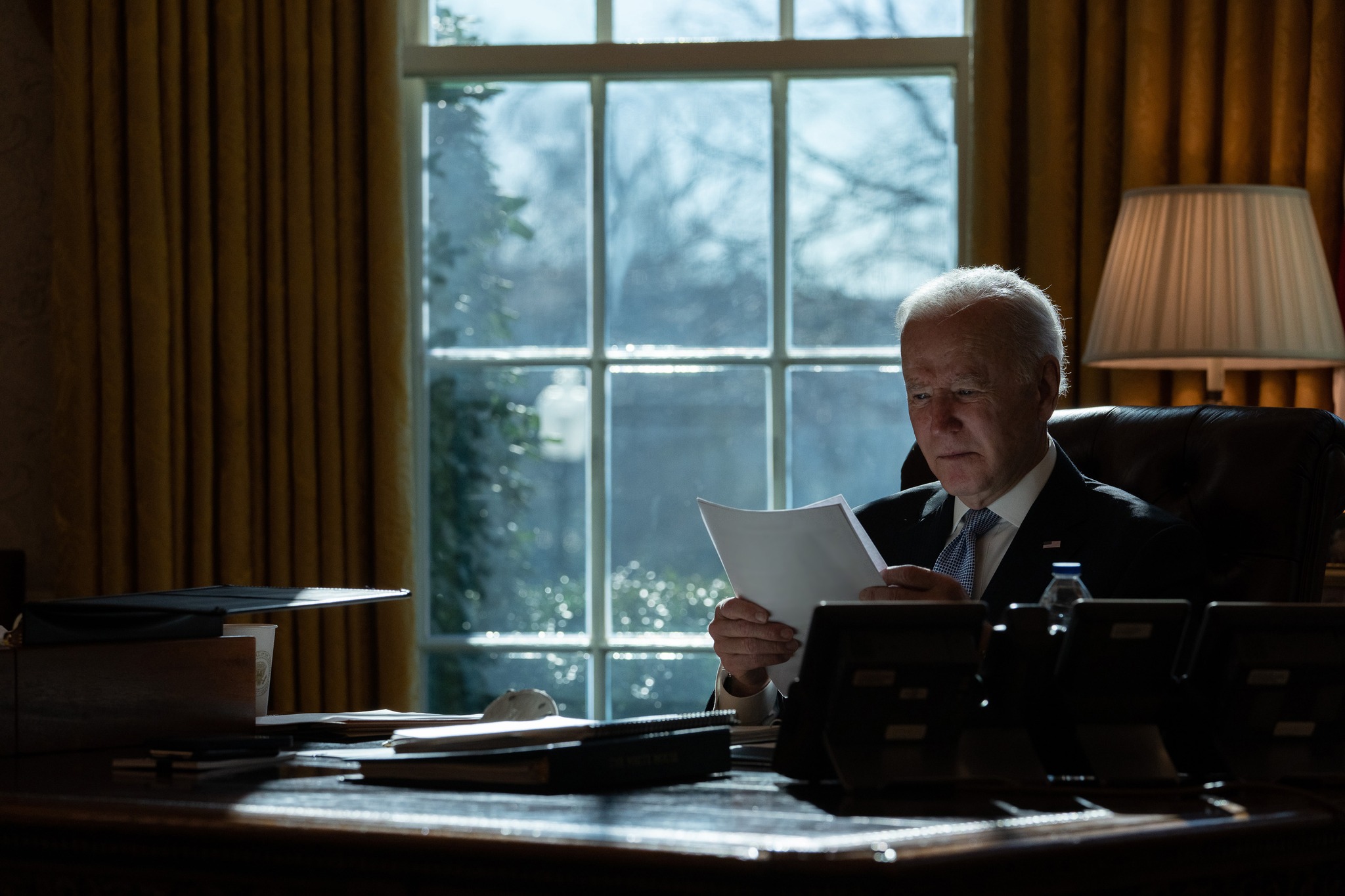 Russia has expelled the deputy chief of the U.S. diplomatic mission in Moscow amid escalating tensions over Ukraine, the AP reports.  The U.S. embassy was quoted saying it would respond to the move.

“Russia has filed a report with the United Nations alleging that Ukraine’s military has committed ‘crimes’ against residents of the eastern Donbas region,” the Wall Street Journal reports. And this would be the “false flag” Biden suggested was coming.

“It’s very high.”  — President Biden, when asked by CBS News about the likelihood of a Russian invasion of Ukraine.

“Russia has added as many as 7,000 troops near the Ukraine border in recent days, contrary to claims by President Vladimir Putin that troops would be pulled back from the region,” the AP reports.

“NATO allies accused Russia of misleading the world and disseminating ‘disinformation’ by saying it was returning some troops to bases, charging that Moscow has instead added as many as 7,000 more troops near its tense border with Ukraine,” the AP reports.

“With Western fears high that Russia is planning to invade, tensions also spiked Thursday along the line that separates Ukrainian forces from Russia-backed separatists in the country’s east, with the parties accusing each other of intensive shelling.”

“Ukraine’s military and the Russian-backed separatists it has battled for eight years in the country’s eastern Donbas region both accused the other side of opening fire on Thursday in violation of ceasefire agreements that have been shaky, at best, since they were signed seven years ago,” CBS News reports.

“The reports of shelling and gunfire were a worrying indication that tensions could be escalating despite Russia’s claims to be pulling forces back from Ukraine’s borders.”

A total of 24 Russian warships have been operating in the Sea of Japan and the southern part of the Sea of Okhotsk since Feb. 1, in what defense chief Nobuo Kishi called part of “unusual” large-scale military exercises, the Japan Times reports.

“Chi­na’s top lead­ers have spent days weigh­ing how far Bei­jing should go to back Russ­ian Pres­i­dent Vladimir Putin and how to man­age a part­ner­ship many call a mar­riage of convenience as op­posed to one of con­vic­tion,” the Wall Street Journal reports.

Washington Post: “In a remarkable diplomatic display Wednesday, Brazilian President Jair Bolsonaro, who resisted domestic appeals as well as pressure from U.S. officials to cancel his visit to Moscow, sat knee to knee with Putin and declared that Brazil was in ‘solidarity’ with Russia.”

“Putin then named Brazil as Russia’s most important partner in Latin America.”

“Alexei Navalny, the imprisoned Kremlin critic, appeared in a prison court this morning facing embezzlement charges that could keep him locked up until 2032,” the Times of London reports.  “Navalny, 45, appeared at a special court hearing inside the prison near Moscow where he is serving a two-and- a-half-year sentence on fraud charges that he says were trumped up to stifle his opposition to President Putin.”

“As the authorities threaten to arrest people blocking the streets of the capital, protest organizers on Wednesday appealed to supporters to pour into Ottawa and make their gatherings too large for the police to disperse,” the New York Times reports.

“Changing tactics, the organizers held a fairly standard and controlled news conference at a Sheraton hotel, trying to make their case to the journalists covering them and to ordinary Canadians. In the past, they have spoken primarily to supportive right-wing media, or at news conferences packed with supporters who heckled and intimidated reporters who asked questions.”

After his initial shipment of MyPillow products was denied entry into Canada, Mike Lindell told the Daily Beast about a backup plan to get free pillows to Canadian truckers: drop them from the sky via a helicopter.

Lindell said the pillows will have “little parachutes,” while adding “make sure you put that part in, or it could be dangerous.”

“On Tuesday evening, former President Donald Trump, rattled by news that his longtime accountants had declared that years of his financial statements were not reliable, issued a statement of self-defense with new claims about his wealth,” the New York Times reports.

“The shape-shifting valuations, even in the face of mounting legal peril with Mazars’ decision to sever ties and disavow its past financial statements, get to the core of a problem for Mr. Trump. He has spent a lifetime bending reality to his will, often making it up as he went along, inventing facts and figures to support his needs in the moment. In fact, in his Tuesday email he suggested the intangible value of the ‘Trump brand’ was actually worth an extra $3 billion in 2014.”

“A judge will hear arguments Thursday in former President Donald Trump’s fight to avoid being questioned under oath in a New York investigation into his business practices,” the AP reports.

Meanwhile, Insider notes that James is asking the judge to compel the Trump family “to comply with civil subpoenas for their testimony and documents, including the contents of two dozen file cabinets in the organization’s Trump Tower headquarters, presumed to hold the former president’s personal business files.”

Oath Keepers leader Stewart Rhodes’ defense lawyer said during a hearing on Wednesday that Rhodes, who’s been charged with seditious conspiracy, had told the House Jan. 6 Committee in an interview that he still believes the 2020 election was “illegitimate.”

But that’s totally fine, the lawyer argued, because Republican lawmakers are saying the same thing.

Anyway, Rhodes’ and the other Oath Keepers’ plan to deploy armed “Quick Reaction Forces” to the Capitol would’ve been legal if Trump had invoked the Insurrection Act, Rhodes’ attorney told the judge. But Trump didn’t do that, so off to Olive Garden they went.

“The House select committee investigating the Capitol attack is considering issuing a subpoena to Ivanka Trump to force her cooperation with the inquiry into Donald Trump’s efforts to return himself to power on 6 January,” The Guardian reports.

“Any move to subpoena Ivanka Trump and, for the first time, force a member of Trump’s own family to testify against him, would mark a dramatic escalation in the 6 January inquiry that could amount to a treacherous legal and political moment for the former president.”

The Washington Post reported on details of the texts former White House chief of Staff Mark Meadows had received from various Trump allies before, during and after the Capitol insurrection. The texts were obtained by the House Jan. 6 Committee.

“The nation’s leading health officials said Wednesday that the U.S. is moving closer to the point that Covid-19 is no longer a ‘constant crisis’ as more cities, businesses and sports venues began lifting pandemic restrictions around the country,” the AP reports.

“Marine Le Pen has accused her spokesman of ‘high treason’ for allegedly spying on her on behalf of Éric Zemmour, her far-right rival in the French presidential election,” the Times of London reports.

“Le Pen, leader of the National Rally, suspended Nicolas Bay and described him as a ‘slimy slug’ who had tried to sabotage her campaign.”

“Until a couple of years ago, the ‘great replacement’ — a racist conspiracy theory that white Christian populations are being intentionally replaced by nonwhite immigrants — was so toxic in France that even Marine Le Pen, the longtime leader of the country’s far right, pointedly refused to use it,” the New York Times reports.

“But in a presidential race that has widened the boundaries of political acceptability in France, Valérie Pécresse, the candidate of the mainstream center-right party in the coming election, used the phrase over the weekend in a speech punctuated with coded attacks against immigrants and Muslims.”

“Senate leaders are racing to land a deal that would thwart a government shutdown by appeasing a Republican blockade,” Politico reports.  “Several Republican senators continue to resist swift passage of a stopgap spending bill that would give Congress three more weeks to negotiate a broad bipartisan spending package. The GOP holdouts are demanding that the chamber first vote on barring federal cash from being used to enforce vaccine mandates.”

Said McConnell: “Oh, and just to make the political games transparent, they want this to expire right after the midterms, as soon as the next Congress is sworn in.”

“Hopes were raised of a deal between the United States and Iran within days after both sides reported progress in talks on Tehran’s nuclear program,” the Times of London reports.

“President Joe Biden is expected to ask Congress for a U.S. defense budget exceeding $770 billion for the next fiscal year as the Pentagon seeks to modernize the military, eclipsing the record budget requests by former President Donald Trump,” Reuters reports.

The Pentagon said that decades of mergers in the American defense sector have left the U.S. military less well-equipped and needlessly overburdened taxpayers, the Financial Times reports.  The Department of Defense report, released on Tuesday, detailed the post-Cold War surge in mergers which has shrunk the number of American defence prime contractors from 51 in 1990 to 5 today: Lockheed Martin, Raytheon, General Dynamics, Northrop Grumman and Boeing.

Hillary Clinton accused Donald Trump and Fox News of “desperately spinning up a fake scandal to distract from his real ones.”  Said Clinton: “The more his misdeeds are exposed, the more they lie.”

Hunter Biden’s ex-girlfriend has testified before a federal grand jury investigating him for alleged tax crimes, the Daily Mail reports.

“The Justice Department is launching a new initiative aimed at identifying companies that exploit supply chain disruptions in the U.S. to make increased profits in violation of federal antitrust laws,” the AP reports.

The Chinese “billionaire” behind Steve Bannon’s projects and the right-wing social media app Gettr filed for Chapter 11 bankruptcy, claiming to only be worth $50,000 to $100,000, the Daily Beast reports.

“That said, I do not think there is much evidence that misinformation has become more widespread, that this increase in misinformation is due to technological change, or that it is at the root of the political trends liberals are most angry about. If anything, people seem to be better-informed than in the past — which is what you would expect because our information technology has gotten better — and it is very hard to think of any cure for misinformation that would not be worse than the disease.”

“While serving as Interior Department secretary under Donald Trump, Ryan Zinke broke federal ethics rules repeatedly by improperly participating in real estate negotiations with the chairman of the energy giant Halliburton at the time and other developers,” the Washington Post reports.

“Now a leading Republican candidate to win a newly-drawn congressional seat in Montana this fall, Zinke also lied to an agency ethics official who questioned him about his involvement in the negotiations.”

“There’s a growing sense among Democrats that it’s time for a change of course at the White House — whether that means new strategy or new staffers,” NBC News reports.

“On the political front, President Joe Biden’s numbers aren’t getting better, his message isn’t resonating, and his party’s midterm prospects are bleak. On policy, his Build Back Better plan is dead, Covid is alive, and inflation is rising.”

“If he doesn’t take a new tack soon, it may be impossible for him to deliver for the public, help his party in November or move an agenda in the final three years of his term, according to a dozen lawmakers.”