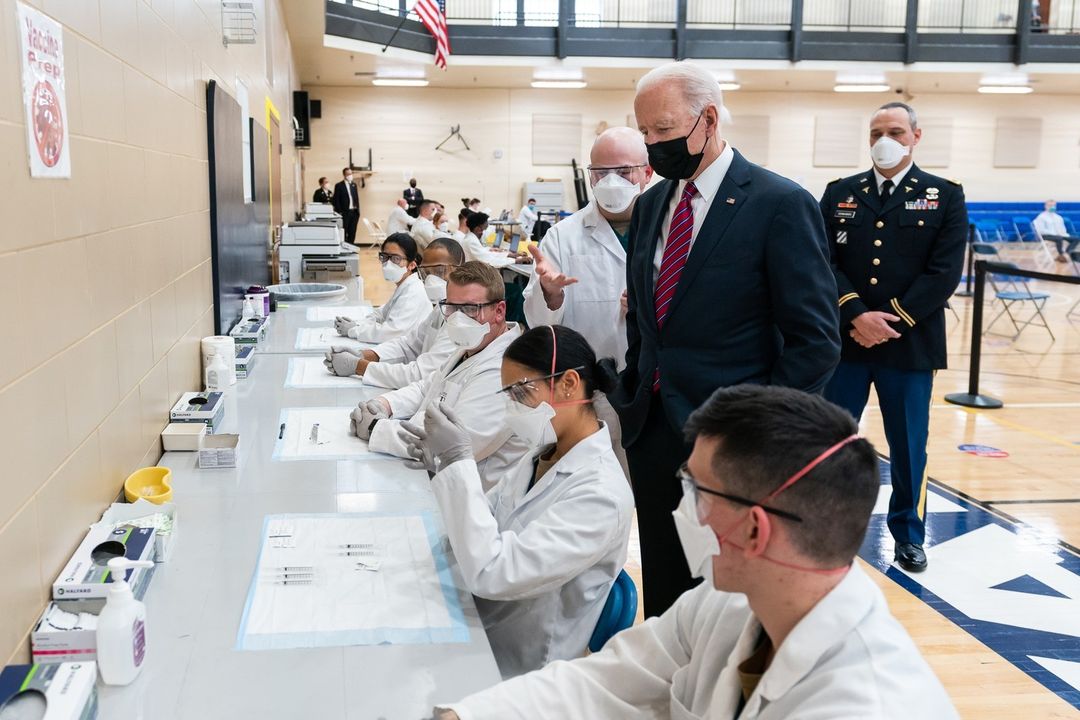 A new CNN poll finds 45% of Democratic and Democratic-leaning voters wanted to see the party renominate Joe Biden in 2024, while 51% preferred a different candidate.

Across the aisle, Republican and Republican-leaning voters are about evenly split between wanting their party to nominate Donald Trump again, 50% to 49%.

New York Times: “Mr. Thiel, who became known in 2016 as one of the biggest donors to Mr. Trump’s presidential campaign, has re-emerged as a key financier of the Make America Great Again movement. After sitting out the 2020 presidential race, the venture capitalist this year is backing 16 Senate and House candidates, many of whom have embraced the lie that Mr. Trump won the election.”

“To get these candidates into office, Mr. Thiel has given more than $20.4 million. That essentially puts him and Kenneth Griffin, the chief executive of the hedge fund Citadel, in a tie as the largest individual donors to Republican politics this election cycle.”

“What sets Mr. Thiel’s spending apart, though, is its focus on hard-right candidates who traffic in the conspiracy theories espoused by Mr. Trump and who cast themselves as rebels determined to overthrow the Republican establishment and even the broader American political order. These campaigns have raised millions in small-dollar donations, but Mr. Thiel’s wealth could accelerate the shift of views once considered fringe to the mainstream — while making himself a new power broker on the right.”

“The White House is arranging a meeting with President Joe Biden and Democratic National Committee Chair Jaime Harrison, which will come after reports of a strained relationship between the chair and the White House’s political operation,” NBC News reports.

After more than six years of Donald Trump dominating the news, it’s obvious to anyone paying attention that political news fatigue is real.  However, a new Civic Science poll finds Democrats are far more likely than Republicans to say they have felt it after the last national election.  Considering the stakes of what is going on in the country, this would appear to be the wrong time for Democrats to disengage.

Dan Balz: “Democrats piled on the criticism of the RNC, but this was a sideshow to their main challenge of trying to persuade voters to look more favorably on Biden and themselves in the hope that they could turn around their midterm fortunes. For all that it said about the Republicans — and it said plenty about a party that has been caught in the undertow of the former president’s lies and obsessions — the RNC controversy offered only minimal opportunity to Democrats as a campaign issue.”

“Many political strategists say the RNC’s censure resolution is not top-of-mind for voters. It remains an inside-the-Beltway issue that has not and likely will not break through to the typical voter. This is important because of what it signifies for the Republicans, but there’s scant evidence that it’s going to move many general election voters.”

Former President Donald Trump pushed back on recent reports that his influence within the Republican party is waning, The Hill reports.

Trump insisted that the power of his endorsement in races up and down the ballot “is much stronger today than it was even prior to” the 2020 presidential election.

He added: “I am almost unblemished in the victory count, and it is considered by the real pollsters to be the strongest endorsement in U.S. political history.”

OHIO U.S. SENATOR. “Donald Trump has a new fixation: a Major League Baseball scion who hails from one of the country’s richest families — and who, unlike most other Republican Senate candidates, isn’t bowing to the former president,” Politico reports.

“During meetings, phone calls and impromptu chats, Trump has been peppering top aides and allies with questions about Matt Dolan, a wealthy Ohio Republican who accused the former president of ‘perpetuating lies about the outcome’ of the 2020 election and called the pro-Trump Jan. 6 Capitol riot ‘a failure of leadership.’”

The Republican firm co/efficient has released the very first survey of the May primary that wasn’t done on behalf of a candidate or allied group, and it shows businessman Mike Gibbons leading former state Treasurer Josh Mandel 20-18, with state Sen. Matt Dolan in third with 7%; former state party chair Jane Timken takes 6%, while venture capitalist J.D. Vance grabs fifth with 5%.

Gibbons, who badly lost the 2018 primary for Ohio’s other Senate seat, also has dropped a Cygnal poll giving him a wider 23-11 edge over Mandel, which is a huge improvement from the 16-13 edge the firm gave him two weeks ago,

Vance’s allies at Protect Ohio Values, meanwhile, are going up with their first TV spot since mid-November, a move that come days after Politico reported that the Peter Thiel-funded group’s own polls showed that “Vance needs a course correction ASAP that will resolidify him as a true conservative.” The commercial seeks to do that with clips of the candidate attacking “elites” and concludes with footage of Fox host Tucker Carlson telling him, “You’ve really, I think, understand what’s gone wrong with the country.”

ALABAMA U.S. SENATOR. Former Business Council of Alabama head Katie Boyd Britt’s new ad for the May Republican primary is centered around her opposition to abortion.

ARIZONA U.S. SENATOR. The Republican pollster co/efficient, which tells us they have no client, finds no clear favorite in the August GOP primary to take on Democratic Sen. Mark Kelly. Attorney General Mark Brnovich edges out businessman Jim Lamon 17-13, with Thiel Capital chief operating officer Blake Masters just behind with 12%. Two other Republicans, retired Air Force Maj. Gen. Michael McGuire and state Corporation Commissioner Justin Olson, barely register with 3% and 1%, respectively. The firm also tests out a scenario in which Gov. Doug Ducey runs and finds Brnovich narrowly outpacing him 14-13 as Lamon and Masters each take 11%.

These numbers are quite a bit different than those another GOP firm, OH Predictive Insights, found a few weeks ago. That earlier survey of the current field had Brnovich leading McGuire 25-11; when Ducey was added, he beat the attorney general 27-12.

LOUISIANA GOVERNOR. Republican state Rep. Daryl Deshotel attracted lots of local attention when he recently gave his own campaign $1 million, and he told the Lafayette Daily Advertiser on Thursday, “I’m open to everything, but I honestly don’t have a target right now.” While much speculation has centered around next year’s open-seat race for governor, Deshotel, who has described himself as “fiscally conservative but more moderate on social issues,” didn’t specifically mention the contest, and he didn’t even commit to using the money to aid himself. Deshotel instead said, “It may be that I end up using the money to support other candidates who I believe can help the state.”

MICHIGAN GOVERNOR. Blueprint Polling, which describes itself as a “sister company” to the Democratic firm Chism Strategies, is out with a survey showing Democratic incumbent Gretchen Whitmer deadlocked 44-44 with former Detroit Police Chief James Craig. Blueprint, which says it did this survey “with no input or funding from any candidate, committee or interest group,” did not release numbers testing Whitmer against any other Republican.

CALIFORNIA 3RD CD. Sacramento County Sheriff Scott Jones received an endorsement from Republican Rep. Darrell Issa, who represents an inland San Diego County seat, for the June top-two primary for this open district in Sacramento’s eastern suburbs. While Issa’s constituency is located hundreds of miles to the south of the new 3rd District, he may have some clout with conservatives more broadly thanks in part to his long history of using his influence in Congress to torment Democrats.

PENNSYLVANIA 18TH CD. Nonprofit executive Stephanie Fox, a Democrat who didn’t report any fourth quarter fundraising with the FEC, has announced that she’ll run for a state House seat rather than continue with her congressional bid.

WEST VIRGINIA 2ND CD. Republican Rep. Alex Mooney’s allies at the Club for Growth have released a new internal poll from WPA Intelligence showing him beating fellow Rep. David McKinley by a 43-28 margin in the May 10 primary. That is similar to a January poll from Mooney’s own campaign that had him up 45-32, though a McKinley survey from December featured McKinley leading 40-34.

VIRGINIA 2ND CD. In an email to supporters that begins with the line, “I don’t know what I’m doing,” former Republican Rep. Scott Taylor says he’s giving “serious consideration” to yet another comeback bid in Virginia’s 2nd Congressional District.

Taylor’s tenure in D.C. was short. In 2016, he easily won election over Democrat Shaun Brown following an unusual series of events that began when a federal court threw out much of Virginia’s congressional map for illegally diminishing the political power of Black voters. After the court drew new lines, GOP Rep. Scott Rigell announced his retirement, which prompted another Republican congressman, Randy Forbes, to say he’d seek re-election in Rigell’s district, since his own had been made unwinnably blue. But Forbes didn’t represent any part of the 2nd District, and Taylor, a former Navy SEAL who’d been elected to the state House in 2013, defeated him in the primary 53-41.

Two years later, however, Taylor ran headlong into the blue wave, as shifting demographics in the Virginia Beach area plus a far stronger Democratic opponent in Navy veteran Elaine Luria combined to give him a difficult race. But in the end, Taylor was likely done in by his own hand: His own staffers conspired to put Brown on the ballot as an independent in order to siphon votes from Luria, but they were busted for forging signatures on her petitions. Taylor disavowed all knowledge, but an investigation into the scandal (which resulted in multiple aides getting indicted) consumed his campaign and was the focus of countless Democratic ads.

Luria wound up unseating Taylor 51-49, then beat him again by a wider 52-46 margin in 2020. (In between those two campaigns, Taylor briefly tried his hand at a bid for Senate.) One favorable development for Taylor since then, though, is the fact that the 2nd became a couple of points redder in redistricting: Under the old lines, it voted for Joe Biden by a 51-47 margin, but the new version would have supported Biden by a slightly narrower 50-48 spread.

Taylor, though, would have to contend with a few candidates who are already seeking the Republican nomination, including state Sen. Jen Kiggans and high school football coach Jarome Bell, both of whom are also Navy vets (Virginia Beach is home to a huge Naval air station). Kiggans raised $251,000 in the fourth quarter and had $342,000 on hand, while Bell, who finished third in the primary last cycle, brought in $112,000 but finished with just $121,000 in the bank. Luria swamped them both, however, with a $672,000 haul and a giant $2.3 million cash stockpile.