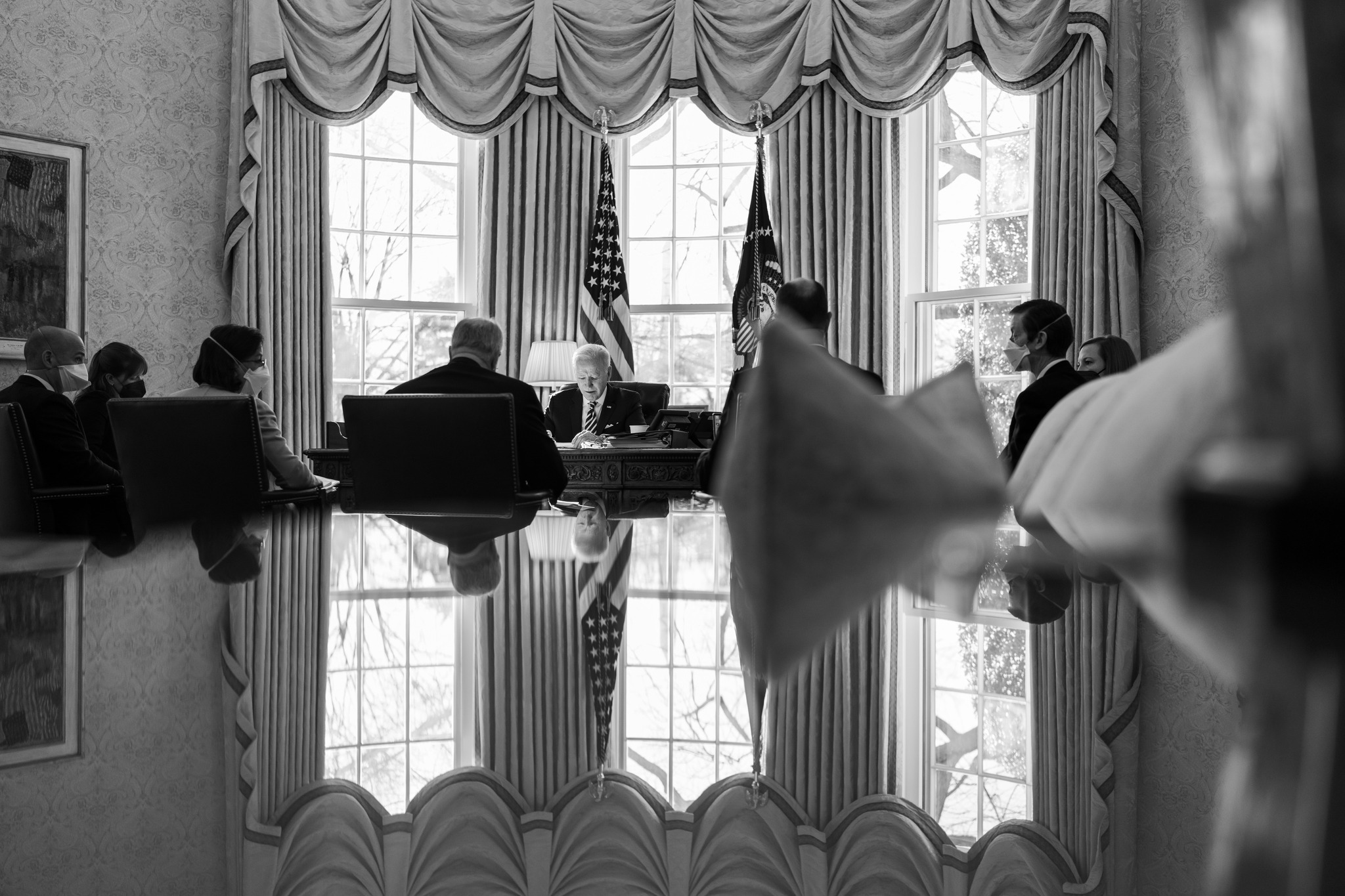 Wall Street Journal: “Ukrainian officials say that Russia, which has positioned more than 100,000 troops around three sides of Ukraine, is stepping up a destabilization campaign involving cyberattacks, economic disruption and a new tactic: hundreds of fake bomb threats.”

“Russian forces and their proxies already control portions of Ukraine and frequent skirmish with government forces. The aim of Moscow’s intensifying hybrid campaign, Ukrainian officials say, is to weaken their country and sow panic, potentially provoking discontent and protests of the kind Russia fomented in eastern Ukraine in 2014 to justify its interventions there. U.S. and U.K. officials said last month they uncovered coup plots intended to install a puppet pro-Russian government.”

Washington Post: “The Russian military buildup in Belarus appears aimed at Ukraine for now, but the new deployments are sending chills through Belarus’s Baltic neighbors — Lithuania, Latvia and Estonia — as well as some Eastern European countries because of the possibility of a game-changing Russian presence on or near their borders.”

“Between 20,000 and 30,000 Russian troops along with warplanes, missile batteries and air defense systems have moved into Belarus in recent weeks, officially to participate in a military exercise.”

“Some airlines have canceled or diverted flights to Ukraine amid heightened fears that an invasion by Russia is imminent despite intensive weekend talks between the Kremlin and the West,” the AP reports.

Washington Post: “A standoff between police and protesters from the self-styled ‘Freedom Convoy’ opposing coronavirus vaccine mandates continued Sunday near a vital U.S.-Canada border crossing, even as crowds reportedly started shrinking overnight and one arrest was made. After law enforcement enforced an injunction ordering truckers and their supporters to leave, and ticketed and towed vehicles, a defiant core of protesters mostly remained on foot as temperatures dropped below freezing.”

“The blockade of the Ambassador Bridge, a key trade corridor that connects Windsor, Ontario, to Detroit, which has disrupted traffic and the flow of goods since Monday, has not ended.”

Wall Street Journal: “Efforts by Canadian police to clear protesters blocking traffic on a crucial bridge between the U.S. and Canada appear to have stalled Saturday, as an initial crowd of roughly 50 people swelled to over 500 as of early afternoon, among them parents with children.”

A new Maru Public Opinion poll found that 56% of Canadians don’t have an iota of sympathy for Freedom Convoy — and two thirds wouldn’t mind seeing their blockades cleared by military force.

But Canadians are also turning their ire on a “weak” government response and an intransigent prime minister whom they blame for “inflaming” the situation. The poll found that only 16% of Canadians would vote for Prime Minister Justin Trudeau based on his actions of the last two weeks.

Sen. Rand Paul (R-KY) “said he hopes truckers would come to the United States as soon as this weekend to clog up streets in Los Angeles during the Super Bowl or next month to Washington,” the Washington Post reports.

Said Paul: “I’m all for it. Civil disobedience is a time-honored tradition in our country, from slavery to civil rights to you name it. Peaceful protest, clog things up, make people think about the mandates.”

He added: “I hope the truckers do come to America, and I hope they clog up cities.”

CNN: “The difficulty for the committee in tracking down just whom Trump spoke with — and when — is dealing with his unorthodox phone habits while in office: According to multiple sources formerly in the administration, the ex-President often used other people’s telephones (or multiple phones of his own, sometimes rotated in and out of use) to communicate with his supporters — and even family.”

“One former staffer blamed the former President’s habit on an aversion to anyone listening to his calls (which, in the White House, is hard for a president to avoid if he calls from a desk phone). So he would, frequently, grab the cell phone of a nearby aide or even a Secret Service agent to make calls.”

“Rudy Giuliani, who as former President Donald Trump’s lawyer helped lead the effort to overturn the results of the 2020 election, is in discussions with the House Jan. 6 committee about responding to its questions,“ the New York Times reports.

“The extent of any assistance that Mr. Giuliani might provide remains unclear and the negotiations could easily fall apart, especially as Mr. Trump continues to publicly rail against the investigation.”

Associated Press: “For some Democrats, it’s time to draw contrasts with Republicans by forcing votes on priorities like helping families afford health care and combating global warming. Others see wisdom in declaring what victories they can and avoiding anything that might complicate efforts to strike deals with their own party’s mavericks over broader priorities.”

New York Times: “In the year since Mr. Trump has left the White House, he has undertaken a wide-ranging set of moneymaking ventures, trading repeatedly on his political fame and fan base in pursuit of profit. Much as he did while in the White House, Mr. Trump has thoroughly blurred the lines between his political ambitions and his business interests.”

“For Mr. Trump, the monetization of his post-presidency represents a return to his roots. He expertly leveraged his celebrity as the host of ‘The Apprentice’ and his image as a decisive businessman to build credibility when he first entered politics. Now, he is executing the same playbook, only in reverse: converting a political following that provided hundreds of millions of dollars in small campaign contributions into a base of consumers for all things branded Trump.”

Roll Call: “Defense spending appeared set for a larger-than-authorized increase in the fiscal year that began Oct. 1 as part of a ‘framework’ appropriators agreed to Wednesday, though the pact’s contents remained a mystery as stakeholders scrambled to figure out what’s in store for a massive omnibus package being written in secret.”

“Speculation was rife on Capitol Hill and K Street that national defense and related programs would see a $30 billion boost above President Joe Biden’s budget request, or $5 billion more than even the fiscal 2022 defense authorization law outlined.”

New York Times reporter Maggie Haberman told CNN that she did not save her report that then-President Donald Trump clogged White House toilets by flushing documents for her forthcoming book.

Said Haberman: “I did not know this was happening while he was president. I’m not known for sitting on scoops if I have information, number one. Number two, I found this out in the course of reporting for the book, well after Trump had left the White House.”

She added that her book doesn’t come out for eight months, and she said she was “trying to get this information out as fast as possible.”

“A Beverly Hills cosmetologist who stormed the U.S. Capitol on Jan. 6, 2021, in support of the man she calls ‘Trumpy Bear,’ recently told fellow supporters that she only pleaded guilty ‘to stay out of jail,’ that she didn’t read the plea deal she signed, and that she doesn’t think Capitol defendants will get locked away for a long time because former President Donald Trump is ‘coming back,’” NBC News reports.

“Under the plea deal, Gina Bisignano was supposed to cooperate with the government, and could receive credit at sentencing for demonstrating acceptance of responsibility. But in a recording of a recent voice chat she had with supporters of Jan. 6 defendants, Bisignano didn’t exactly strike a conciliatory tone.”

“Declassified U.S. military analyses of the calamitous exit from Afghanistan detail repeated instances of friction between American troops and diplomats before and during the evacuation, concluding that indecisiveness among Biden administration officials in Washington and initial reluctance to shutter the embassy in Kabul sowed chaos and put the overall mission at ‘increased risk,’” the Washington Post reports.

“The assessments appear to affirm separate accounts of senior U.S. commanders frustrated by what they characterized as sloppy, misguided management of the withdrawal.”

“Taliban authorities are holding at least nine foreigners in custody in Kabul — including one American and several British citizens — inflaming tensions with the West at a time when Afghanistan desperately needs international aid,” the Wall Street Journal reports.

Virginia Gov. Glenn Youngkin has apologized after mistaking one Black legislator for another in a text message, the AP reports.

Former White House communications director Alyssa Farah Griffin said members of her family — including her father —skipped her wedding on account of her criticism of former president Donald Trump, The Independent reports.

“Gasoline prices across the U.S. are surging to the highest level in eight years as the price of crude oil rises, spiked by worries about geopolitical tensions in Eastern Europe,” CBS News reports.