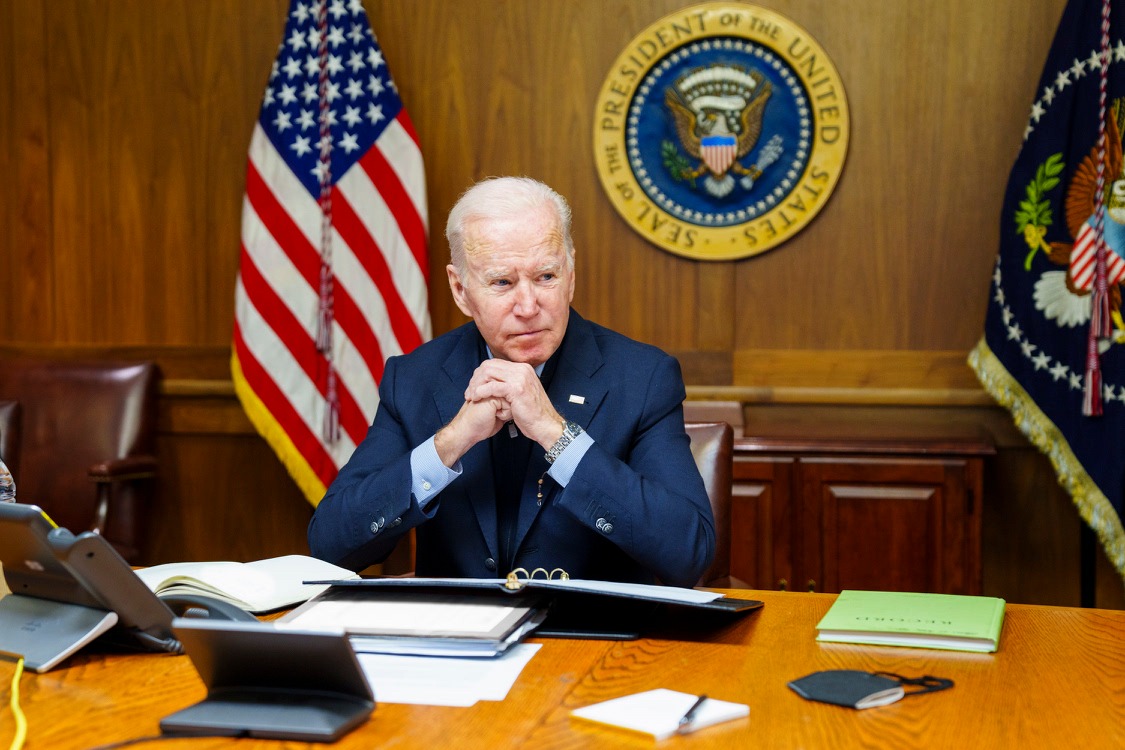 The U.S. and its allies have new intelligence that suggests Russia could launch an attack on Ukraine even before the end of the Olympics, CNN reports. Previous assessments had suggested movement was unlikely until after the Olympics.

The Washington Post reports there was a Situation Room meeting last night about the potential invasion. The U.S. believes Russian President Vladimir Putin has decided to invade Ukraine and has communicated that decision to the Russian military, PBS Newshour reports. The invasion is expected to begin next week and U.S. officials anticipate “a horrific, bloody campaign that begins with two days or aerial bombardment and electronic warfare, followed by an invasion, with the possible goal of regime change.”

“The United States has obtained new intelligence that suggests Russia is planning to stage an attack that it would falsely blame on Ukraine to justify invading the country, possibly as early as next week,” the Washington Post reports.

“The intelligence about a ‘false flag’ operation was discussed in a quickly convened meeting in the White House Situation Room on Thursday evening and helped prompt renewed calls from the Biden administration for all Americans to leave Ukraine immediately.”

“Russia has pushed back fiercely against the warnings by the Biden administration that Moscow is on the verge of attack, accusing the West of hysteria and spreading disinformation even as Russian forces continue to hold major exercises near Kyiv’s borders.”

“However, Russia confirmed media reports Saturday that it was pulling its own diplomatic staff from Ukraine.”

AP: “Before talking to Biden, Putin is to have a call with French President Emmanuel Macron, who met with him in Moscow earlier in the week to try to resolve the crisis.”

“Russia has massed troops near the Ukraine border and has sent troops to exercises in neighboring Belarus, but insistently denies that it intends to launch an offensive against Ukraine.”

Key takeaway: “The U.S. picked up intelligence that Russia is looking at Wednesday as a target date.”

“The U.S. State Department began evacuating staffers from the U.S. Embassy in Kyiv Saturday, amid mounting warnings that Moscow could imminently launch an invasion of Ukraine,” the Washington Post reports.

CNN: “Numerous countries are also downgrading their diplomatic presence and urging their citizens to leave Ukraine.”

Washington Post: “Russian President Vladimir Putin and top Russian officials for months have been denying that Moscow is preparing to mount an invasion of neighboring Ukraine. But videos posted to TikTok and other social media platforms tell another story.”

“In areas of Russia and Belarus near the Ukrainian border, onlookers have uploaded hundreds of videos showing sophisticated Russian weaponry and military vehicles speeding by on railways, highways and local roads toward positions near Ukraine.”

President Biden was asked by NBC News what scenario could prompt him to send troops to rescue Americans fleeing the country.  Said replied: “There’s not. That’s a world war when Americans and Russia start shooting at one another.”

He added: “We’re in a very different world than we’ve ever been.”

“The United States will be sending 3,000 additional troops to Poland in the coming days to try and help reassure NATO allies, as Russia held military exercises in Belarus and the Black Sea following the buildup of its forces near Ukraine,” Reuters reports.

Axios: “It’s the strongest escalation by authorities after truckers, farmers and other protesters have blocked roads and portions of the busiest U.S.-Canada border crossing for days, cutting off key delivery routes and leading factories to shut down.”

Globe and Mail: “Premier Doug Ford intends to get tough with the protesters, one source said. In addition to hefty fines and the possible confiscation of vehicles, the sources said the province is also looking at its options for suspending commercial licenses.”

“Police fired tear gas at demonstrators on the Champs-Élysées avenue in Paris on Saturday shortly after a ‘Freedom Convoy’ protesting against Covid-19 restrictions made it into the French capital,” France 24 reports.

BBC: “Authorities have deployed more than 7,000 officers over the next three days in a bid to stop the demonstrators.”

“Pfizer-BioNTech is postponing its rolling application to the Food and Drug Administration to expand the use of its two-dose Covid-19 vaccine for children ages 6 months to 4 years,” NBC News reports.

“The move means that vaccines for this age group will not be available in the coming weeks, a setback for parents eager to vaccinate their young children.”

“Biden administration officials have been adamant that earlier versions of the Build Back Better proposal — stalled for months largely due to Manchin’s opposition — is fully paid for and would not add to the deficit. But that argument has not persuaded either Manchin or some of the Washington budget hawks in communication with him.”

David Leonhardt: “The misery of the Covid-19 pandemic — with its death, illness, isolation and frustration — has left many Americans desperate for clear guidance on how to live safely. People want to protect themselves, their family and their communities, especially the most medically vulnerable members of it. This instinct is both understandable and profoundly decent.”

“But it has led to a widespread misunderstanding. Many people have come to believe that expert opinion is a unitary, omniscient force. That’s the assumption behind the phrases ‘follow the science’ and ‘what the science says.’ It imagines science almost as a god — Science — who could solve our dilemmas if we only listened.”

“Some Democrats are pushing President Biden to use his planned State of the Union speech to endorse a return to a sense of normalcy as Covid-19 cases fall, pressuring the White House as many of the party’s governors are rolling back restrictions in their states,” the Wall Street Journal reports.

“The elected officials are zeroing in on the March 1 speech as a pivotal opportunity for Mr. Biden to embrace dropping of mask mandates and other rules, as cases decline from the recent Omicron surge but hospitalizations remain high in parts of the country.”

“They are hoping the prime-time address can lift public morale and boost the party heading into midterm elections, where Democrats are considered to face an uphill fight keeping control of Congress.”

Politico: Senate Democrats left behind as party inches away from mask mandates.

NBC News: “The flurry of bipartisan activity comes as Democrats have hit a wall on many of Biden’s campaign promises that lack GOP support, from gun control to liberalizing immigration to overhauling police practices. Democratic leaders pivoted after a failed vote to curtail the Senate’s 60-vote threshold, which preserves the Republican minority’s power to shape — or veto — legislation.”

“What the Democratic leaders seem to have finally realized is that in a 50-50 Senate, the only way you’re going to be able to produce any accomplishments that matter to the American people is to work across the aisle.” — Sen. Susan Collins (R-ME), quoted by NBC News, on the flurry of bipartisan bills being considered.

Los Angeles Times: “Some frustrated Democrats say strategic blunders by Senate Majority Leader Charles Schumer (D-N.Y.) and White House Chief of Staff Ronald Klain were, in large part, to blame for Biden failing to win passage of a massive social spending and climate plan. The men too frequently sought to appease progressives and their allied groups while antagonizing the moderates needed to pass the legislation, known as Build Back Better, they say.”

“After that bill died in December, leaving Democrats reeling, Schumer and Klain doubled-down on the same strategy, pivoting to a quixotic showdown over voting rights that further alienated the moderate lawmakers they still need to revive at least part of the spending plan.”

Said one Democratic lawmaker: “They just won’t take the hits. They tell everyone what they want to hear and they’re afraid to take the hits from activist groups, whether it’s on voting rights or other policy areas. And if no one is willing to take the hits, it’s anarchy.”

I am sure the source for this article was Moe Blanchin.

“California would be the first state to impose Covid-19 vaccine mandates at all workplaces under sweeping new legislation to be unveiled Friday,” Politico reports.

“The bill from Assemblymember Buffy Wicks (D) comes as Gov. Gavin Newsom plans to release a statewide pandemic exit strategy signaling the transition to an ‘endemic’ phase of the public health crisis.”

“The Department of Justice released a new version of the Mueller report Friday afternoon that reveals for the first time that former special counsel Robert Mueller declined to charge Donald Trump Jr. with a misdemeanor ‘computer intrusion’ crime for accessing a website using a password he obtained from WikiLeaks,” BuzzFeed News reports.

“The new version of the report also said that Mueller declined, citing insufficient evidence, to charge the political operative Roger Stone with crimes related to the hacking of Democratic National Committee computers and email accounts.”

“The new version of the Mueller report contains more than a dozen new unredacted passages and was released in response to a Freedom of Information Act lawsuit.”

“On the eve of the 80th anniversary of the forced internment of 120,000 Japanese Americans at the onset of World War II, Sen. Mike Lee (R-UT) is getting backlash for holding up the creation of a national historic site at a former internment camp in rural Colorado,” the AP reports.

Donald Trump has been complaining loudly to people that Scooter Libby, who he pardoned, is attended a fundraiser for Rep. Liz Cheney (R-WY), the New York Times reports.  He has indicated he sees it as somehow disloyal.

The Washington Post reports Trump has asked if he can rescind the pardon.

“But they surged during Mr. Trump’s time in office and in its aftermath, as the former president’s own violent language fueled a mainstreaming of menacing political speech and lawmakers used charged words and imagery to describe the stakes of the political moment.”